Guiding the self-organization of microparticles

We are interested in using DNA as specific binding groups to guide the self-assembly of nano-/ microparticles into ordered structures. This particular self-assembly strategy has gained much interest because they offer a large variety of user-defined nucleotide sequences and fine thermal control of the binding strength. This has recently resulted in a number of groups to obtain ordered crystals and self-assembled ‘colloidal molecules’.1–4 However, the fabrication of such well-organized structures typically requires extensive fine-tuning and annealing of the system. One of the challenges lies in the sharp association and dissociation transition of the particles when one crosses the melting temperature of the DNA linkers.5–10 The temperature window for equilibrium self-assembly thus is easy to miss, leading to ‘hit & stick’ type aggregation without further structural rearrangements. We are developing and studying a novel system of solid colloids functionalized with specific (DNA) binding groups that are fully mobile along the particle surface. By coating the microparticles with a lipid bilayer and anchoring the DNA to it through hydrophobic end-groups we couple the DNA to the particles’ surface whilst they remain able to diffuse over the surface of the particles. So far we have already shown that guiding the self-assembly of microparticles by these mobile DNA linkers alleviates many of the aforementioned problems and provides access to profoundly new behavior.11 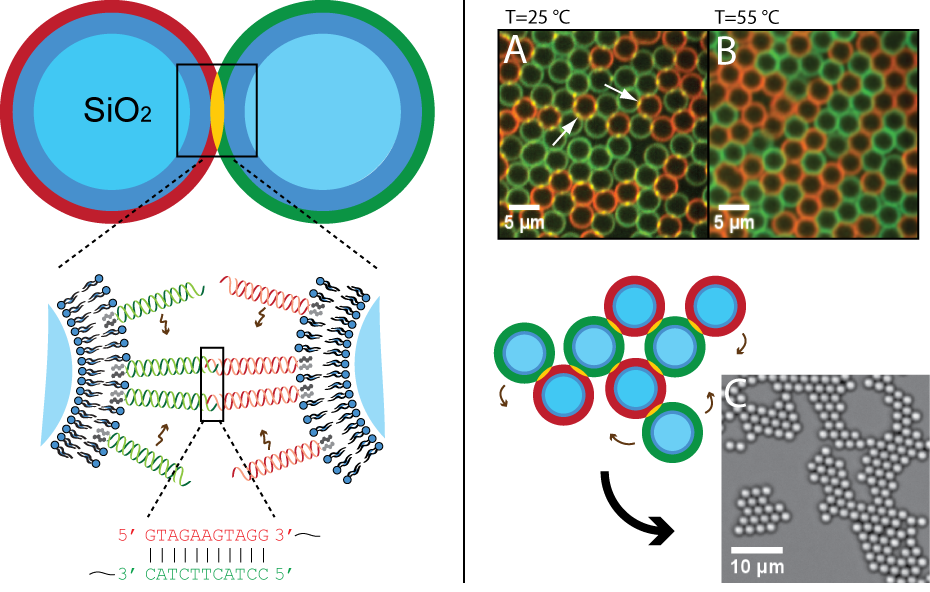 Figure 1. Temperature-dependent behaviour of 1:1 microparticle mixtures functionalized with complementary mobile DNA linkers. Time averages of 100 confocal images at 25 °C (A) and 55 °C (B) of a high-density fully jammed random packing of 3.56 µm diameter particles with no remaining translational freedom to self-organize or diffuse away (the field of view drifted somewhat between the low- and high-temperature recordings, though). The white arrows in panels A indicate examples of the bright fluorescent spots that only appear at low temperature at the complementary particle contacts, due to a locally enhanced linker concentration. The occasional bright spot between two particles of the same colour is the result of a small number of fluorescent DNA-functionalized SUVs from our particle preparation procedure having been left behind in the suspension. (C) By slowly quenching the temperature from above the melting transition to below it, the particles organize into 2D crystal-like structures.

Furthermore, we are using the microparticles functionalized with surface-mobile DNA-linkers to study interactions in soft matter and biological inspired systems, specifically the weak, non-covalent interactions. Therefore we built a setup which combines force measurements by optical tweezers with reflection interference contrast microscopy (RICM). The combination of optical tweezers with RICM allows us not only to calibrate our optical tweezers in the x-y direction, but also in the z direction. With the setup we can apply a force on the particle while monitoring its height relative to the underlying substrate. This way it becomes possible to deduce the force that is necessary to lift the particle a certain height and hence determine the strength of the interaction between the particle and the underlying substrate.Furthermore the lengths of molecules which connect a functionalized bead with a functionalized surface can be determined.

Currently we are interested what influences the strength of different lipid-DNA anchors and the binding forces between the DNA sticky ends. Measurements are done under varying salt conditions, different kind of lipids, and nucleotide composition.

Figure 2. Schematic representations of the experiments possible with the microscope setup built in our lab.