Cell polarity is crucial for many processes in living cells, including differentiation, division, growth and directional migration. To establish polarity, cells rely on elaborate regulation networks to control the distribution of specific proteins at the cell membrane. Often, the cytoskeleton (actin filaments and microtubules) plays an important role by delivering proteins from the cell centre towards the cell membrane (see Fig. 1). However, exact mechanisms have remained unclear. 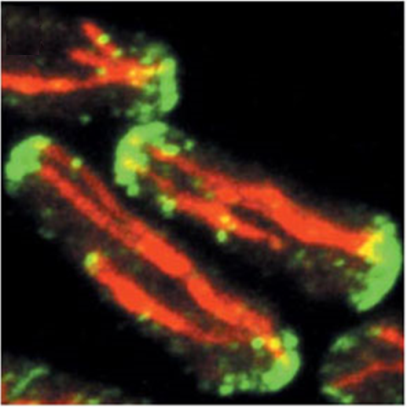 Figure 1: Wildtype S. pombe cells with microtubules in red and the polarity factor for cell growth (tea1p) in green. Tea1p is transported to the cell poles by microtubules (MTs) by association with growing MT plus-ends, and there it associates with the cell cortex [Snaith and Sawin, Nature, 2003]. The result is a polarized pattern.

We want to study the role of microtubules (MTs) in the establishment of cell polarity by reconstitution of an in vitro membrane system that can be polarized with the help of a dynamic MT cytoskeleton.

Figure 2: Creating water-in-oil emulsion droplets using a microfluidic chip. The oil phase and water phase flow through the channels and droplets are created at the junction (picture from Mathijs Vleugel)

As a first step, we have created spherical water-in-oil emulsion droplets with a lipid monolayer using microfluidic techniques (see Fig. 2). Encapsulation of proteins into these droplets, like tubulin, MT end-binding protein EB3 and proteins that interact with EB3, provides the opportunity to study in vitro the MT dynamics and the delivery of proteins to the membrane by MTs. Because the proteins are fluorescently labelled, we can study the dynamics of the MTs and the interaction with proteins with spinning disc confocal microscopy (see Fig. 3 for an example).

Figure 3: Water-in-oil emulsion droplets containing centrosomes and tubulin so microtubule asters are growing. The droplets are imaged with spinning disc confocal fluorescence microscopy. Since the MTs are quite long, they have pushed the aster to one side of the droplet.