Microbial metabolism and its performance are highly dependent on the environmental conditions. The ability of cells to adjust metabolism in response to varying environmental conditions is essential for their survival. In ecological systems and applications like waste-water treatment, the dynamics of the environment lead to the enrichment of certain species that can for example buffer metabolism using extensive storage capacities. Dynamics not only occur in ecological but are also relevant in industrial cultivation environments, though time-scales might be very different.

Especially, large-scale imperfect mixing leads to gradients in substrate and oxygen availability that influence the microorganism performance. Observed are effects varying from improved productivity to significant reductions. Different hypotheses for the impact of dynamics have been formulated, including

On a phenotypic level, both aspects can be associated with a ‘training effect’ showing the flexible metabolic and regulatory adaptation to handle dynamic conditions by fine-tuned (rapid) flux re-distribution rapidly. Although of utmost importance for industrial application, only very few studies have focused on dynamics and possible metabolic switches of (production) microorganisms. The consortium, for the first time, will tackle this central question on a quantitative level using innovative integration of state-of-the-art metabolomics and fluxomics technologies.

Especially, the consortium will use scale-down approaches to mimic large-scale bioreactor substrate and oxygen supply variations. To quantitatively monitor the organisms’ response, rapid sampling for intracellular metabolite concentrations is applied. Modern targeted and non-targeted metabolomics methods are used to unveil the metabolic response in vivo. State-of-the-art 13C tracer technologies are used to follow the intracellular metabolic dynamics with the aim to resolve the intracellular reaction rates including parallel and cyclic pathways.

Difference between ‘trained’ and ‘untrained’, ‘producing’ and ‘non-producing’ microorganisms arerevealed by cultivations with isotopically labeled substrates:

The acquired knowledge will be used to design more robust strains able to keep optimal producing characteristics in dynamic environments. The project focuses on a chemical that can be used as drop-in chemicals for fuels and the chemical industry, 1,4-butanediol (BDO), using Escherichia coli engineered strains.

Next to the applied aspects, the project addresses very fundamental questions of metabolic regulation in bacteria. How does metabolism prevent overflow metabolism and substrate accelerated death by acidification of the intracellular environment upon sudden changes in the environment. Is there a training effect, especially are cells that have experienced many perturbations ‘fitter’ than ‘untrained’ cells? Which mechanisms are involved in the training phase and how does metabolism adapt to frequent perturbations.

With our project we want to shed light on mechanisms involved in the adaption to dynamic conditions. Dynamics will be enforced by cultivation in block-wise fed bioreactors. The applied regimes mimic aspects of large-scale conditions at small scale that allows for rigorous balancing and monitoring of the cellular (metabolic) response. State-of-the-art approaches (metabolomics and 13C flux analysis) are used to identify intracellular fluxes under different cultivation conditions. Especially futile cycles can have a negative impact on the energy conservation (net consumption of ATP) and consequently reduce the production yield. Thus, potential targets for metabolic engineering can be identified.

This approach especially allows to compare organisms that have experienced dynamics for several generations to organisms that were propagated in a steady-state environment. Differences in the response to perturbations will highlight which metabolites and routes are targets of regulation resp. adaption. Based on the experimental observations metabolic models will be extended and used to design strategies to develop better performing strains for large-scale conditions. 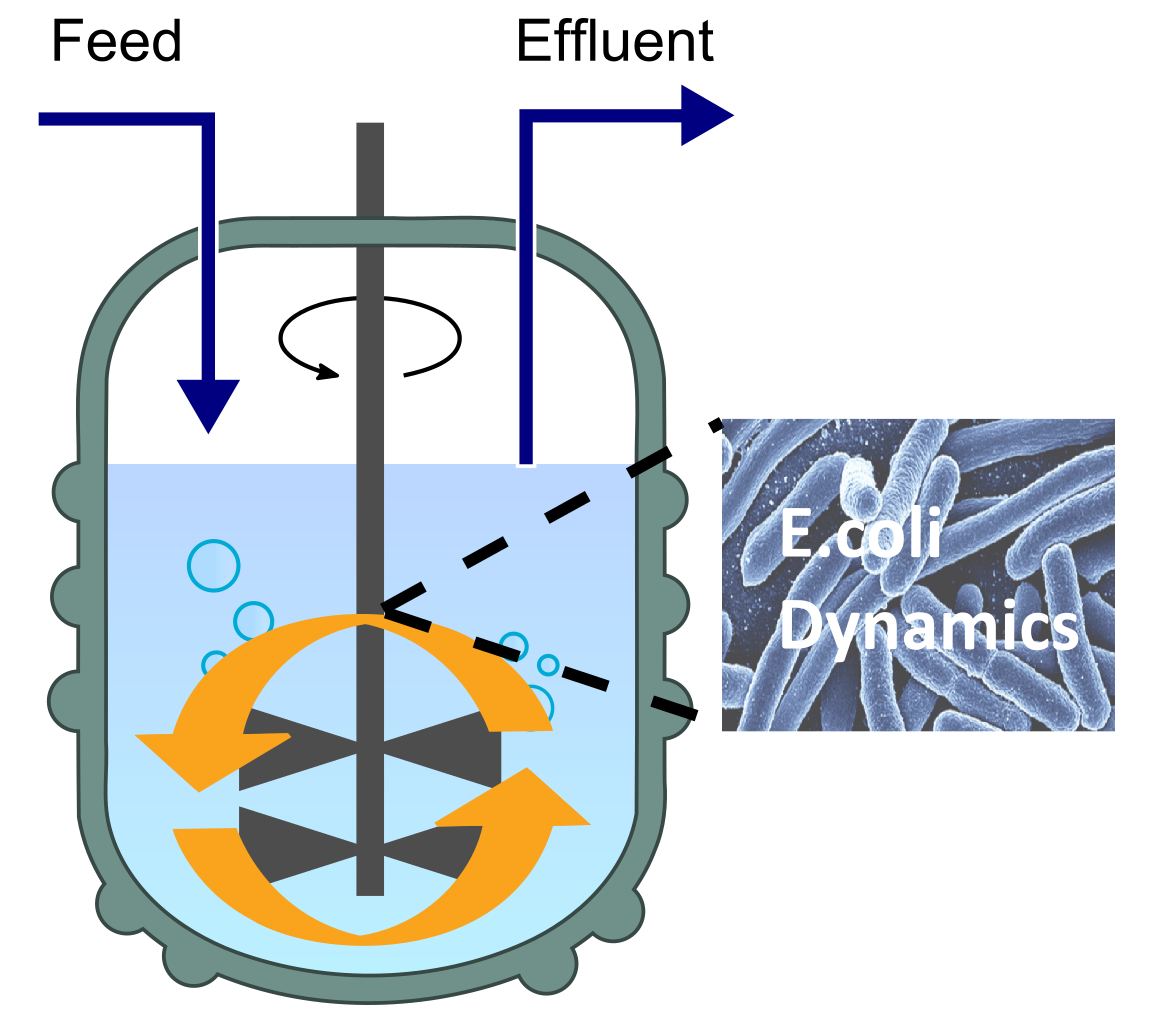