For the transition to a sustainable energy supply, the use of fossil fuels remains indispensable. Membranes separating H2 and CO2 hold the promise to improve the steam reforming of methane (fig.1). In principle Pd membranes fulfil this need, but the lifetime of these membranes is limited. Moreover, the use of precious metals should be minimized. The general approach to remedy these shortcomings is to alloy Pd with other metals such as Cu, Ag or Au. However, a material fulfilling all requirements has not yet emerged.

Figure 1: Example of the use of a Pd membrane in separation enhanced steam methane reforming for H2 production.

We use the recently developed analysis of hydrogen mobility in a membrane layer to determine the intrinsic permeation in a compositional gradient sample (Figure 2). This allows us the determination of the hydrogen permeability of hundreds of allow compositions simultaneously and under the same conditions. Thus we are able to establish the phase diagram and directly relate this to the hydrogen permeability. 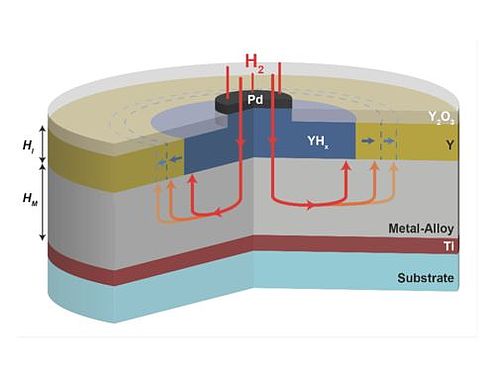 The trick is to deposit on top of the alloy to be investigated an indicator layer such as yttrium, which has a low lateral permeation while its affinity for hydrogen is very high. On top of the yttrium patches of Pd are deposit through which the hydrogen enters the layer stack. Due to oxidation hydrogen cannot enter the stack anywhere else. The hydrogen easily enters of the metal alloy and the yttrium, but the lateral hydrogenation process is determined by the alloy. The yttrium serves as an indicator since its optical properties change a lot on hydrogenation. When plotting the optical coloration front as a function of time, a measure for the permeation is obtained. By depositing the alloy as a gradient composition, the permeation properties of a series of alloy compositions can be measured simultaneously (fig. 3). 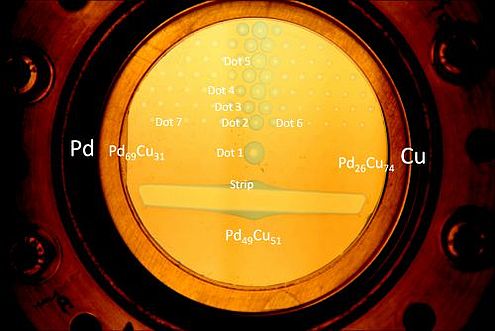 Figure 3: Schematic representation of the lateral hydrogen diffusion in thin film stack, in which yttrium serves as the indicator layer.

At present research is focused on the permeation of Pd-Cu based ternary alloys and link this to the microstructural nature of these films.