The Challenges in seismic imaging

Seismic imaging is a challenging field because the Earth is a very heterogeneous medium. While in most medical ultrasonic imaging applications the medium can be considered acoustic and quasi-homogeneous with embedded small scatterers, the Earth has elastic properties with complex propagation paths including large contrast, yielding complicated and higher-order scattering effects. The main challenge is to include all scattering effects in the wavefield in the imaging/inversion process without looking for too detailed models of the Earth. The strength of the Delphi approach has always been to use effective parametrization  of the subsurface such that the seismic reflection data can be explained, allowing inversion for such parameters in an efficient and effective manner.

In this light surface-related multiple elimination has been developed and was the topic of Eric Verschuur’s Ph.D. research in the late 1980’s, early 1990’s. This method has now been accepted in the industry as one of the standard multiple elimination tools, including its extension to internal multiples (see field data example below) The method kept developing over the decades, resulting in a 3D implementation and an inversion-based approach in which a the estimation of primaries and multiples is embedded in a closed-loop process, such that they are kept consistent with the input data. 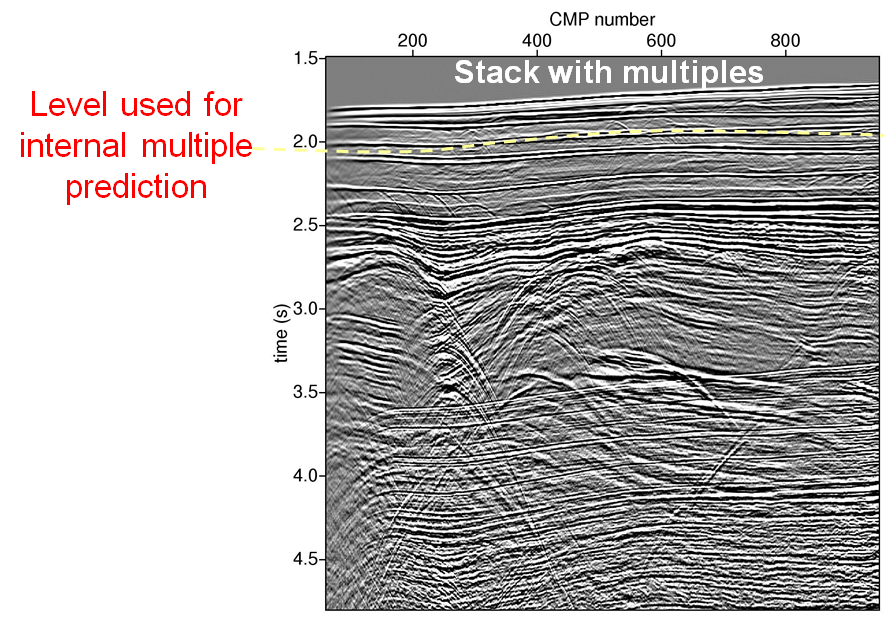 Recently, it has been recognized that multiples should not be considered as noise, but multiples contain valuable information. Instead of removing them, they should be utilized, making velocity estimation and migration fully consistent with the underlying physics. With this in mind we propose an inversion scheme for estimating reflectivity  from the full wavefield (Full Wavefield Migration, FWM). In addition, velocity can also be updated, yielding Joint-Migration_Inversion (JMI). The basis of both algorithms is a forward modelling algorithm (Full Wavefield Modeling, FWMod) based on (decoupled) reflectivity and recursive propagation operators. With these building blocks all multiples can be explained and transmission effects are included. With this recursive and iterative two-way modelling process, from the estimated reflectivities and velocity model (propagation operators), seismic reflection responses are generated.

In Full Wavefield Migration (FWM) both surface-related and internal multiples are included in the migration process, meaning that it is acknowledged that seismic wavefields are nonlinear in reflectivity. Given a propagation velocity model, FWM estimates the reflectivity that explains the observed data and realizes three major advantages: 1) illumination is enhanced, particularly in situations with weak primaries, 2) both the upper side and the lower side of reflectors are illuminated and 3) the codas of the overburden do not overshadow the reflections of the deeper areas. 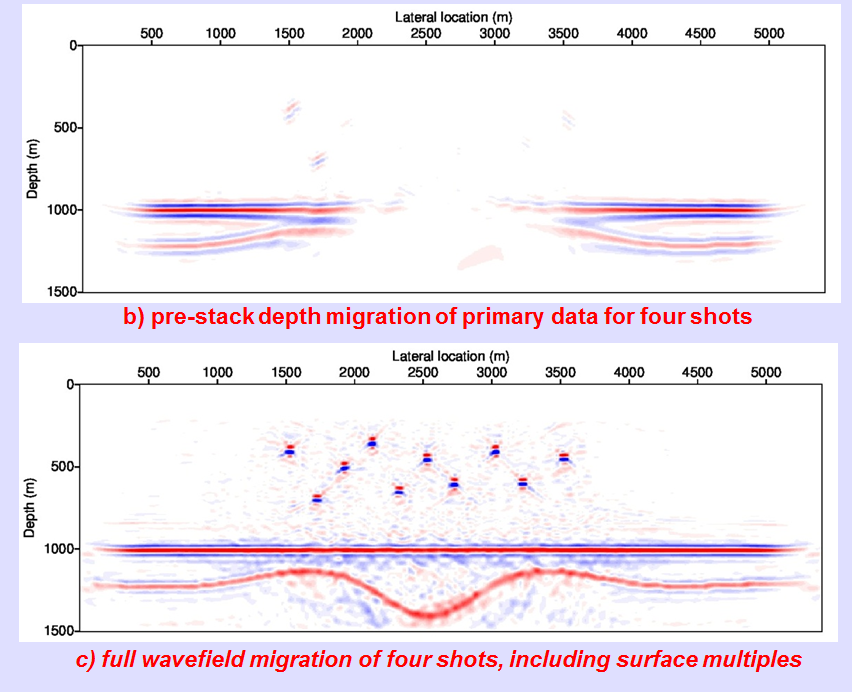 When velocities are also updated during this process, we call it Joint-Migration Inversion (JMI). FWMod is still the forward modelling tool, given the current realization in our parameters. The modeled responses are compared to the measured ones and the resulting residual data is back-projected into the parameter space via inverse extrapolation into the medium and a subsequent transformation of this residual energy – at each depth level – into updates of reflectivity (via the amplitudes) and velocity (via the phase or arrival time).

These new developments will have consequences for the design of acquisition geometries, as multiple reflection events become part of the illuminating wavefield. This makes any reflector in the Earth (including the surface) a potential carrier of secondary sources that produce additional illumination of the subsurface. Especially for sparse geometries like VSP data and ocean bottom node (OBN) data, the multiples play a crucial role in creating a high-resolution image of the subsurface that is consistent with all scattered events in the data. Furthermore, this technology is optimal for time-lapse applications, where all time-lapse datasets are considered in one large, simultaneous inversion process. By doing so, there is no need for exact repetition of acquisition geometries, the latter being one of the  prerequisites of current time-lapse methodologies. Finally, by explaining and utilizing all scattered events in the overburden allows to extract accurate reservoir information, as imprint from multiple reflections is removed and, moreover, these multiples are sued to provide additional target illumination.