Martin D. Verweij (1961) received the M.Sc. (cum laude) and Ph.D. degrees in electrical engineering from Delft University of Technology, Delft, The Netherlands, in 1988 and 1992, respectively. From 1993 to 1997, he was a Research Fellow with the prestigious Royal Netherlands Academy of Arts and Sciences, Amsterdam, The Netherlands. In 1995 and 1997 he was a Visiting Scientist at Schlumberger Cambridge Research, Cambridge, England. In 1998 he became an Assistant Professor, and later that year an Associate Professor, with the Laboratory of Electromagnetic Research, Delft University of Technology. In 2011 he switched to the Laboratory of Acoustical Wavefield Imaging at the same university. Since 2015 he also has a part-time position at the Biomedical Engineering group, Erasmus Medical Centre, Rotterdam. His research interests include dedicated transducer design, beamforming algorithms, and the theoretical modeling and numerical simulation of medical ultrasound. He is the originator of the Iterative Nonlinear Contrast Source (INCS) method for the computation of nonlinear ultrasound fields. Dr. Verweij is a research leader of the Dutch Technology Foundation (NWO/TTW) on projects involving transducer design, beamforming and imaging. 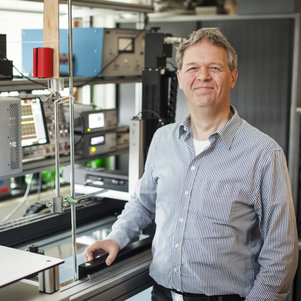