The ROG neutron reflectometer measures the way neutrons are reflected by flat surfaces and interfaces with the aim to provide information about the thickness, composition and roughness of thin films and other layered structures. It can be used to study (stacks of) layers with thicknesses of 5 - 150 nm while providing a resolution up to 0.2 nm. Neutron reflectometry can be used to non-destructively study both liquid and solid samples in a variety of different experimental conditions.

The ROG neutron reflectometer is currently being upgraded as part of the OYSTER project. In combination with the installation of a cold neutron source, this will increase its performance by up to 100x. In a neutron reflectometer, a flat sample is illuminated by a collimated neutron beam under a small angle (< 5 degrees) and the fraction of neutrons reflected relative to the total number of neutrons incident on the sample is determined (i.e. the so-called ‘Reflectivity’). (a) Schematic representation of a neutron reflectometry experiment. In a neutrons reflectometry experiment, a neutron beam illuminates a sample under a small angle of incidence θ. This neutron beam is partly reflected by the sample and the fraction of neutrons reflected is named the reflectivity. An example neutron reflectogram is provided by panel (b), which displays the reflectivity as a function of q. Q is the momentum transfer of the neutron when reflected by the sample and combines the effect of the wavelength and incident angle on the reflectivity in a single parameter. For a material with a different index of refraction/scattering length density (sld), the reflectogram changes. Note that the angles in the schematic are largely exaggerated and the reflectivity is plotted on a logarithmic scale.

Analogous to the reflection of optical light from surfaces, the critical angle and the subsequent decay of reflectivity with increasing angle of incidence depend on the index of refraction of the material studied. However, for neutrons it is often more convenient to use a different quantity named the Scattering Length Density (SLD). The SLD is the product of the scattering length of a material (an isotope-dependent quantity that is well known) and the number of atoms per volume unit.  In contrast to X-rays, the scattering length of neutrons does not monotonously increase with the atomic mass of an element, making neutrons especially powerful for detecting light elements as H and Li and allowing for isotopic substitution (e.g. hydrogen by deuterium).

When a layer of a material is deposited on top of a substrate composed of a material with a different scattering length density, interference occurs between the neutrons reflected from the surface of the sample and neutrons reflected from the interface of the two materials. As illustrated by Figure 2, this interference results in so-called fringes in the reflectivity pattern, whereby the width of the fringes is related to the thickness of the layer and the amplitude to the difference in scattering length density of the two materials.

Schematic representation of a sample composed of a thin film deposited on a slap of material. Interference occurs between neutrons that are reflected from the surface of the sample and those that are reflected from the interface between the material. This interference gives rise to so-called ‘fringes’ in the reflectogram, of which the width is related to the thickness of the material and the amplitude to the difference in scattering length density.

In a typical reflectometry experiment, the Q-dependence of the reflectivity of a sample (can be composed of multiple layers) is determined. Subsequently, the measured reflectivity is fitted to a model system, from which estimates about the layer thicknesses, scattering length density (and thus composition of the material!) and roughness can be obtained.

Neutron reflectometry requires large samples with a surface area of at least 400 mm2 (ideally even larger). Most importantly, the samples have to be homogenous in the in-plane direction and extremely flat. Typically, samples for neutron reflectometry are deposited on specially polished (fused) quartz, SrTiO3, MgF substrates or  relatively thick (>3 mm) Si wafers.  Please contact the instrument scientist for more details.

Currently, we have the following sample environment readily available:

Not (yet) available what you wish? Please contact the instrument scientist to discuss about the possibilities. 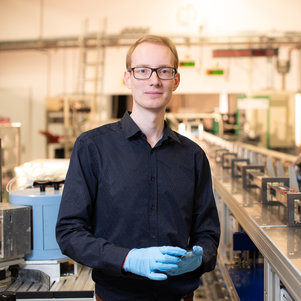