A breakthrough in 3D printing

Although 3D printing may sound futuristic and creative, results so far have often been rather rectilinear. Chengkai Dai just obtained his PhD at the Faculty of Industrial Design Engineering at TU Delft for his work on a new method of 3D printing, which might just become the standard practice.

Have you ever seen a 3D printer in action? It sounds like an arcade game and the printer has the same hypnotic appeal as a fruit machine. Right before your eyes you see an object being built up layer by layer. What will it do next? What will it turn out to be? You can't stop watching.

Maybe even more fascinating than a traditional 3D printer is the 3D printing method that Chengkai Dai developed with a robotic arm. Here, the printed object is built up on the robotic arm, which moves in all directions. As a result, the object is not built up in horizontal layers as in traditional 3D printing, but the layers can be formed in all directions. This is done with the help of algorithms. And then suddenly a beautiful yellow rabbit appears, with rounded curves and its nose and ears built up diagonally.

These rotational motions not only produce a more attractive result, they also resolve all sorts of problems of traditional 3D printing in one stroke, including the notorious problem of overhang. Chengkai Dai: ‘If you print a human figure with a traditional 3D printer, for example, you will always need to print temporary structures under the arms, because they require supporting as you build up the horizontal layers.’ That is why the traditionally printed yellow rabbit needs supports that look like elongated fangs under its mouth and a supporting frame beneath its ears. The rotational motions make overhanging parts ‘self-supporting’, as he puts it, and the jagged surface structure, known as the staircase effect, is much less with Dai's method. 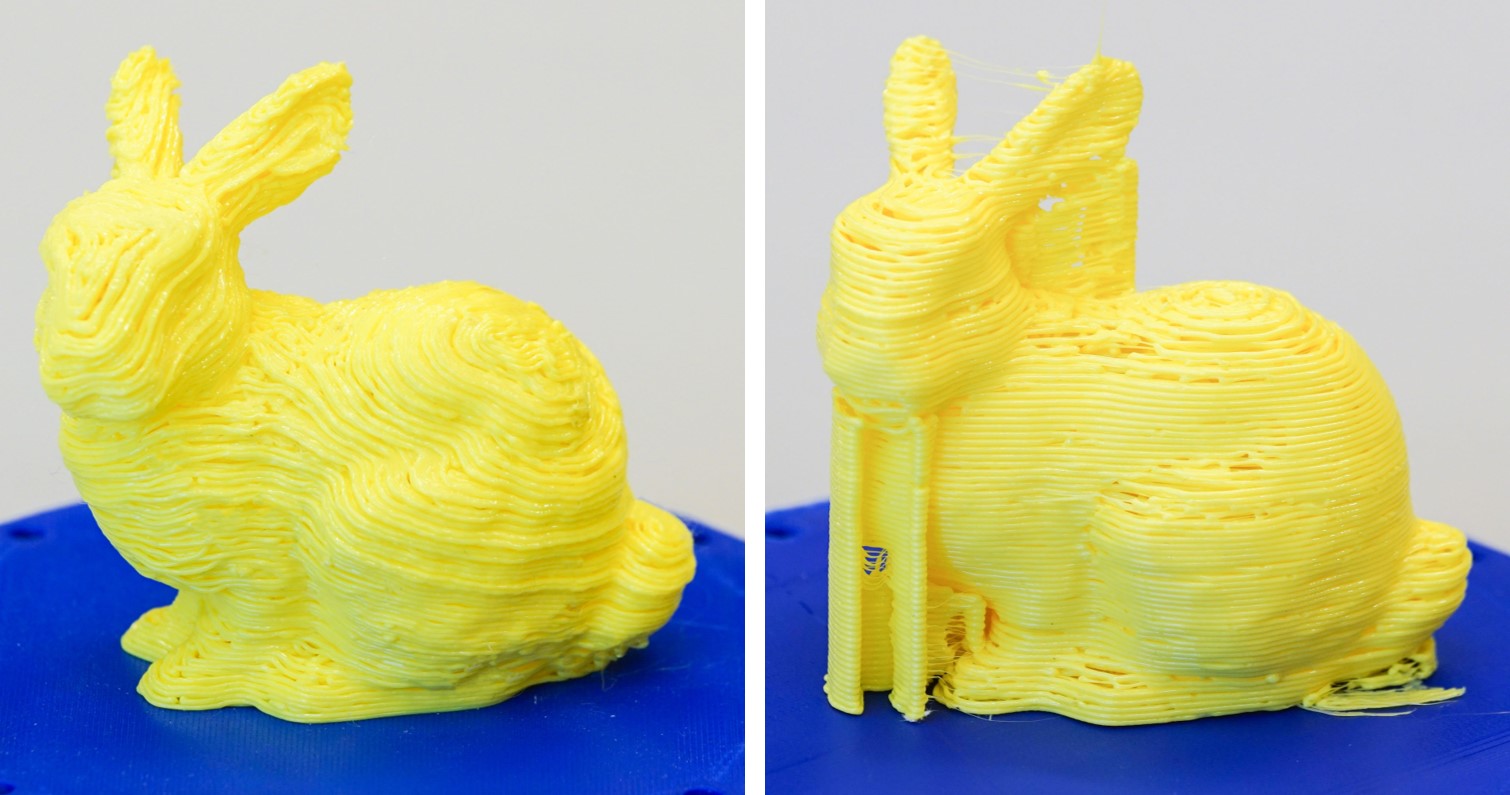 This new technology is therefore a major step forward. Dai expects that his way of printing will become the standard method in future. His dissertation primarily describes how he developed this technology. The operation is complex: the rotating robotic arm makes the ‘accumulation space’ practically limitless. Which direction of rotation is preferable? What produces the best results? Such questions led Dai to develop a methodology and the necessary algorithms, bringing together perfectly his knowledge of both geometry and robotics.

But what exactly can we do with it? Technical engineer Dai recognised the limitations being imposed on industrial designers by traditional 3D printing methods. He wanted to help designers by eliminating these limitations as much as possible. After all, the more freedom you have, the more creative you can be. Things that you can print using this technology include furniture, medical equipment and objets d’art. ‘The possibilities are endless,’ says Dai. 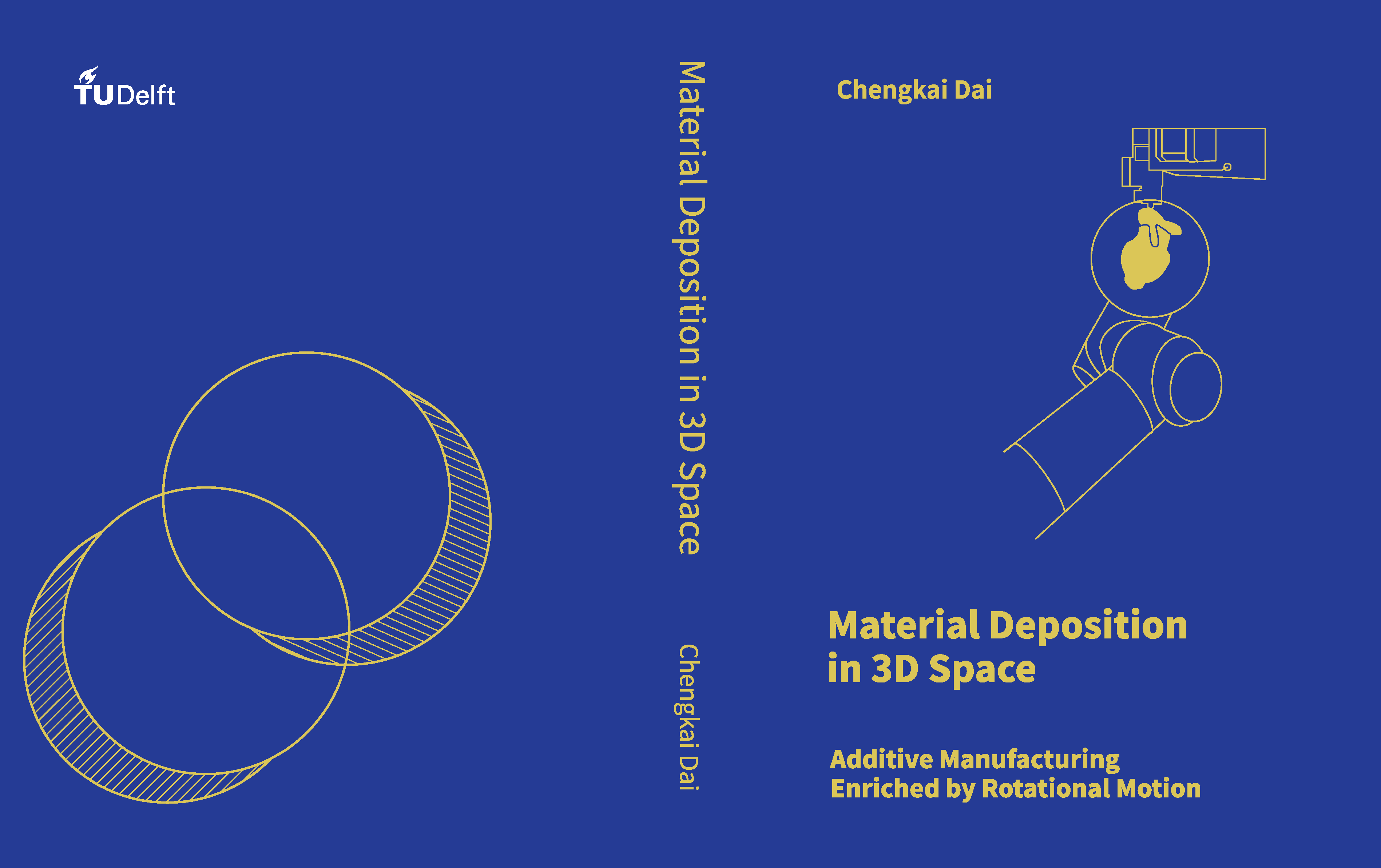 Chengkai Dai originates from China and how he arrived in Delft is fascinating. In 2016, he followed his promotor, Charlie Wang, who took up a position in Delft, from Hong Kong. Wang was and is much more than a promotor. You could say that he is Dai's mentor. ‘Charlie Wang taught me a great deal,’ explains Dai. ‘Not only about research, but also about life itself.’ Life had not only given Dai a sharp intellect, but also a leaning towards depression. ‘This depression meant I was hardly able to get anything done for two years. Professor Wang kept believing in me and continued to see my potential. I was always very uncertain, but he gave me the self-confidence to tackle problems in science and also in life.’ Wang continued to raise Dai's spirits and encourage him, even after one of Dai's articles was rejected by a scientific journal. ‘He kept saying it was a good subject and continued to tell me that if I would just put in enough effort the results would follow naturally.’ Eventually, Dai was able to publish the article about his revolutionary printing method in a leading journal.

Meanwhile, Dai says he is now full of self-confidence. He is getting on well in Delft and the Netherlands. The pace here is less hectic than in Hong Kong and life is less stressful. But the wider world also beckons. He does not know yet where he is going to work. It could be in China, Japan, the US: anything is possible! But he will certainly miss Delft.