A juicy burger, a nice meatball or a crispy schnitzel. You buy and prepare it just the way you like. When you take that first bite, you savour the meaty, salty flavor. What if we told you that what you’re eating is not one hundred percent meat? And no, we’re not talking about a complete meat-free burger like Beyond Meat either. But rather, something in between.

There is growing scientific consensus that we all need to consume less meat. The global meat industry is not only a major emitter of greenhouse gases, it also depletes vital water resources and uses precious land just to produce sufficient animal feed. And beyond the environmental impact of intensive farming, there are also concerns about the living conditions to which we subject our poultry, cattle and pigs.

It would seem that cutting back on sausage and steak is easier said than done. In spite of the well-documented vegetarian and vegan food-trends of going meat-free in the last few years, global consumption of meat has steadily risen. One curious development is the so-called ‘boomerang effect’, where people unwittingly consume more meat the day after a meat-free day.

And as more people worldwide are lifted out of extreme poverty, the demand for meat has grown. While for many of us eating meat is a habit, for others it is a status symbol and part of a nutritious diet. It’s also something that is deeply engrained in a lot of cultures.

In the face of meat’s popularity, how on earth do we reduce our consumption and lessen the effects of the meat industry? Charlotte de Wit, recently graduated student of Industrial Design Engineering at TU Delft, accepted this meaty challenge by coming up with a surprising proposition. What if instead of viewing the ubiquity of meat in our meals as a problem, we see it as the key to the solution? Just by using a couple of tricks that are already found all around us. 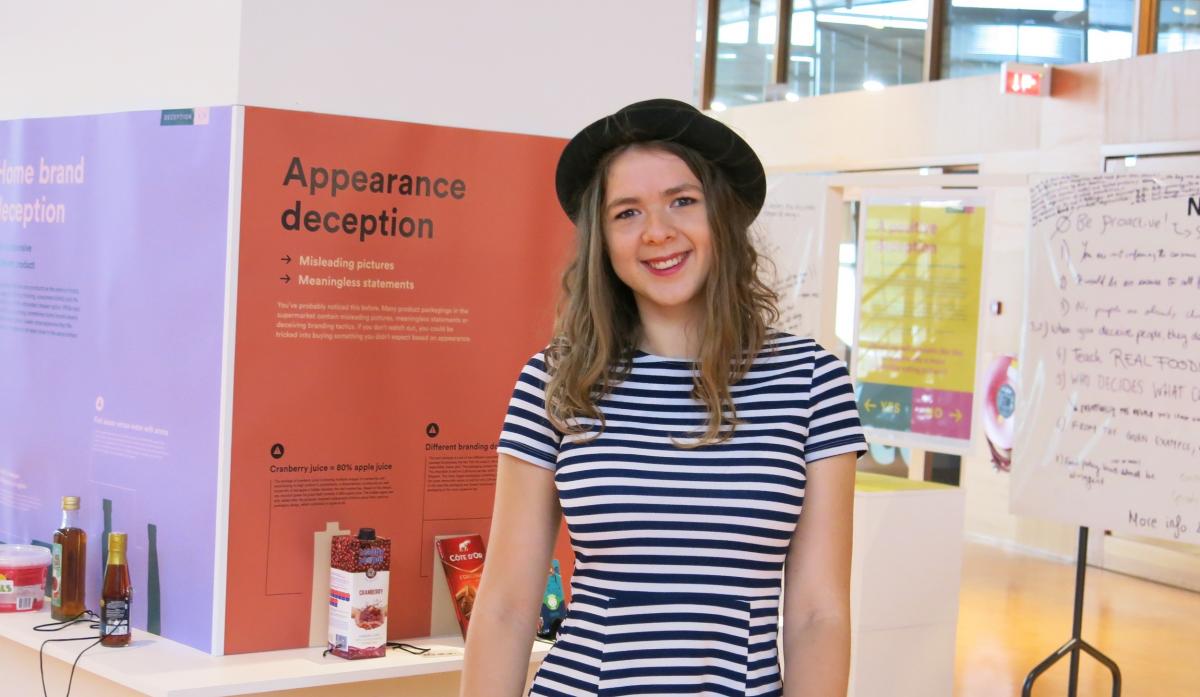 “I’ve always had a fascination with food”, Charlotte starts. “I used to test out recipes on myself. For instance, I thought: what if I just eat the equivalent nutritional value of a meal, while ignoring fancy, expensive ingredients, spices and herbs?” She laughs as she recalls that experiment: “It tasted horrible! I couldn’t keep it up.” This fascination did not stop with the taste of food. Charlotte also collected food packaging of all sorts, shapes and sizes. “I was intrigued by the colours, letters, design and prints on the food we buy. I’ve always felt it was an important factor in how we experience food.”

Having obtained her undergraduate degree in Mechanical Engineering, Charlotte’s passion for concept design, and finding out the real problem behind the problem, drove her to join Delft’s Faculty of Industrial Design Engineering to pursue a Master’s degree in Integrated Product Design. Charlotte found her problem behind the problem in the form of meat consumption. “It’s one of the areas where I believe design can make a real impact. The current set-up of the meat industry is causing real environmental damage. We need to do something now.”

Don’t believe everything you read

It was an offhand conversation with Associate Professor Rick Schifferstein of the Faculty of Industrial Design Engineering’s Food & Eating Design Lab that sparked the first developments in Charlotte’s project. “I told him about collecting food packaging, and even making ‘honest’ packaging with Photoshop as kind of a hobby. We got to talking about cartons of cranberry fruit juice. They contain two ingredients: mainly apple juice and only a small percentage actual cranberry. But it is marketed and sold as…cranberry juice. What if we were to use those same tricks on meat products?”  Charlotte’s hypothesis was that without forcing any drastic changes in eating habits, people would eat the same amount of meat in multiple days that they would normally have eaten in one. Schifferstein was intrigued by this thought process and encouraged her to pursue it further for her MSc Honours Programme.

Turning her private fascination into research, Charlotte started to categorise packaging and marketing tricks. “There are the more obvious ones, like putting desirable images on the front of a product package. A sheaf of wheat on ‘wholegrain’ biscuits that contain less than 50% wholegrain, for instance. Or a big image of those cranberries pictured alongside miniscule apples on that juice carton.” But the tricks can get trickier, with exaggerated claims about the nutritional value of products for children, or hiding the amount of sugar in a product by giving it different names in the ingredient list. One example that caught Charlotte’s attention was the chart of nutrients on the back of a bottle of sauce: “Sauces such as these are made up mostly of salt and sugar. But the manufacturers cleverly put the nutritional value of a full meal with this sauce, including vegetables on the back of the bottle. That gives you way more vitamins and minerals all of a sudden!”

How do you apply these lessons and tricks to meat products? “The vast majority of people eat processed meat. They rarely go to the butchers to buy a piece of steak to mince and prepare into meatballs for tonight’s soup. They go to the supermarket and buy pre-processed meatballs. Knowing this, I looked at creating a packaging design for balls that consist of 80% soy and only 10% of pure beef.” Charlotte: “I looked at it using established and legally accepted practices in our current food industry. These ‘tricks’ are all around us already, just not used for meat products this way.” 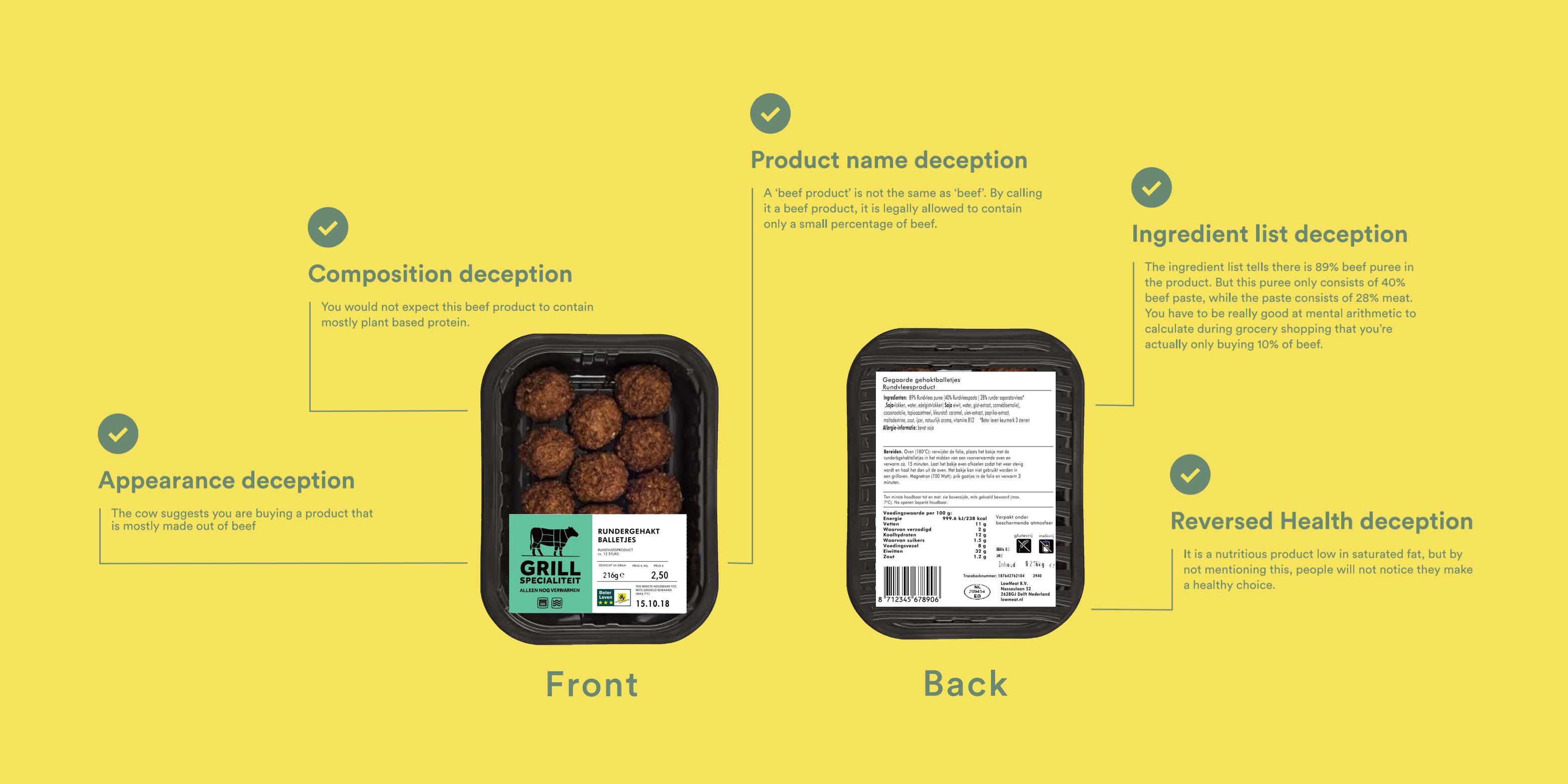 The fact that Charlotte’s ‘meat’ balls were 80% soy was hidden in the ingredient list of her packaging. “You first have to list the main ingredient first. For beef meat balls that would be beef, right? You have to mention the ingredient people might logically expect, so in something that is named ‘guacamole’, you have to mention avocado. If you want to trick people into thinking they’re eating what they’re expecting, you want that ingredient to be mentioned first, by naming your main ingredient mixture after that expected ingredient. So these ‘meat’ balls would have ‘beef paste’ as its main ingredient, a mixture of beef and soy.” Now, because this ingredient is a mixture, we then have to specify the contents of this paste further. “We then list the beef paste as containing mainly a ‘beef emulsion’. In turn, this ‘beef emulsion’ is a mixture, so only here do we need to list the amount of beef in our meat balls.”

Compare these two ingredient lists. The first one, a tricky version of the ‘meat’ balls. The second one a direct representation of the ingredients in order. 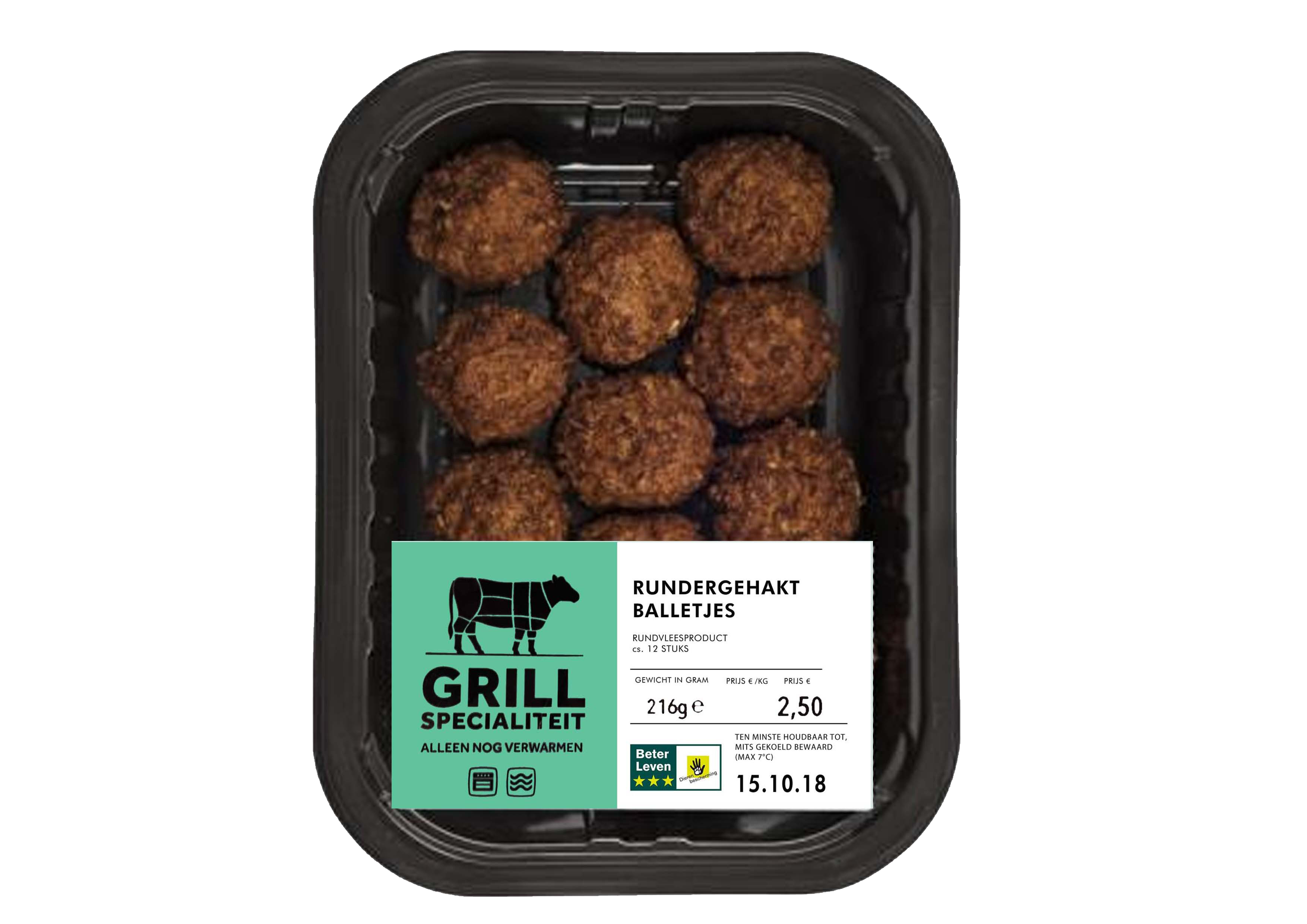 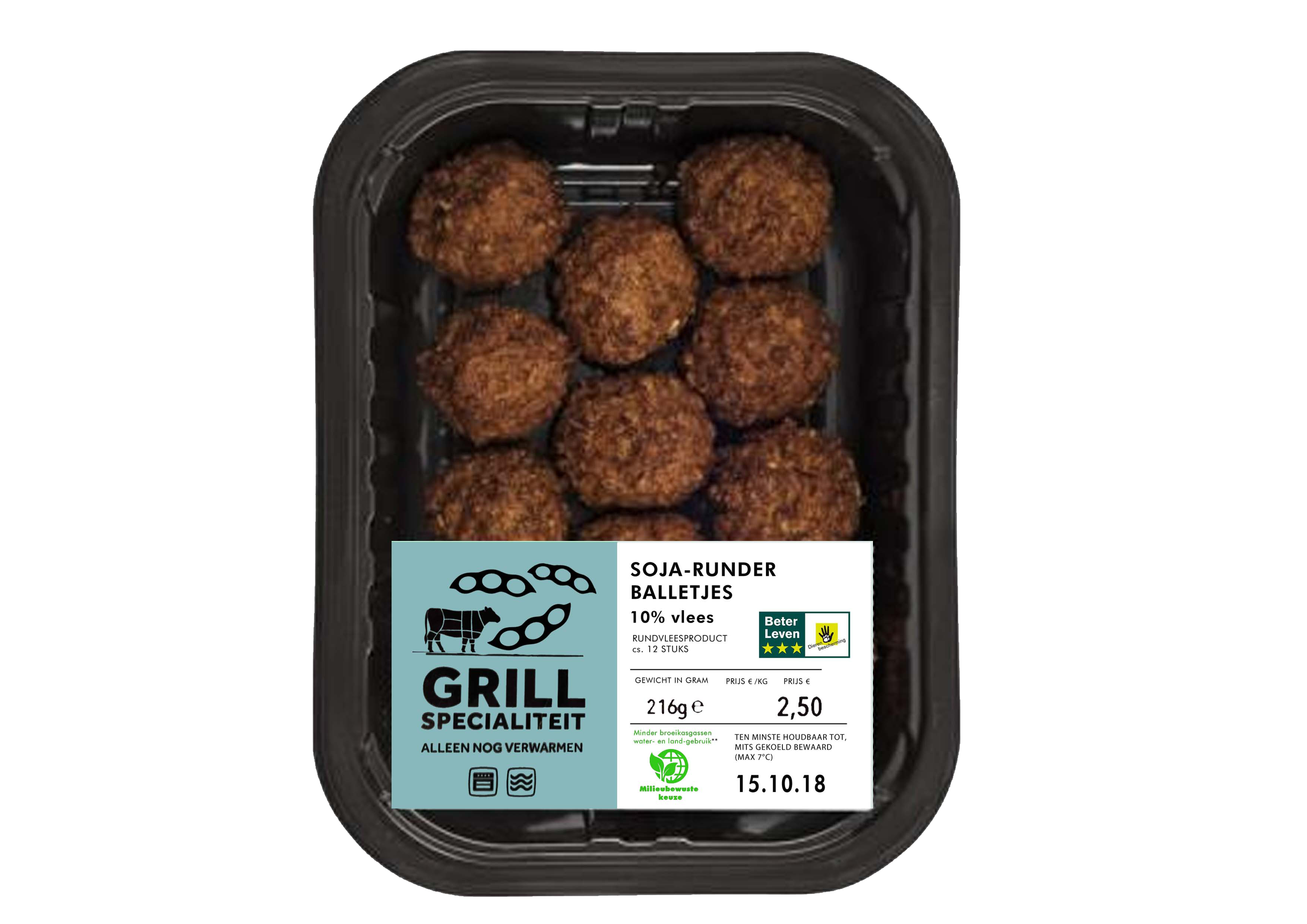 Two other ‘tricks’ Charlotte likes to highlight are deceptively simple: “I just put a picture of a cow on the packaging, playing into what people expect to see. And the name is important, because by law, you’re not allowed to call it beef. If you look at the design you can see that I focused on the ‘balls’ aspect of the meat balls. A subtle but important emphasis.”

When considering how we might reduce the impact of our meaty habits, are these ‘meat’ balls really the taste of things to come?

“From a taste perspective, it’s definitely possible,” Charlotte explains. “We can already make completely plant-based products that mimic the taste and texture of meat to a high degree of accuracy.” Replacing meat with a large proportion of plant-based product would be more sustainable -  even when taking into account the fact that the production of soy requires fertile land and water. “That’s where a lot of misinformation lays. It just takes way more soy to feed a cow in order to breed it for slaughter, than to feed a human. Currently, we grow unbelievable amounts of soy as food for livestock. But if we turned that soy production towards food for humans instead of cattle, we would need less of it. This would lower our demand on our planet’s resources.”

Charlotte’s design is meant to show what is possible. Both from the meat product design perspective -  reducing the amount of beef necessary for processed meat products - as well as the packaging design perspective - creating appealing products that fit into worldwide consumption patterns. Charlotte: “Something has got to give. I see several alternative future scenarios. We could wait for a technology push in the food industry which could reduce resource use. But how likely is this to happen soon? Or we could wait until we reach the peak of our prosperity and possible collapse, making meat a rare luxury product again. But I believe that as a society, we’re not conscious enough when it comes to food. About what we put into our bodies, and what kind of toll it’s taking on us and the world around us.”

What kind of future scenario does Charlotte see for herself after graduating with honours? “I want to keep developing, and to combine science, nutrition, art and customer behaviour. This way, I hope to have an impact on the problems behind our problems.” 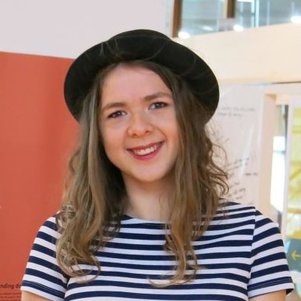 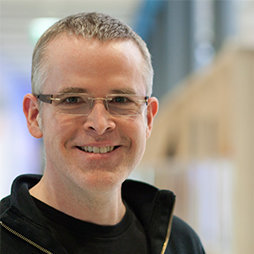 Trying to improve people’s interactions with their daily foods