The unexplored dimensions of renewable energy

Solar power is a great way to produce renewable energy and provide off-the-grid areas in the world with electrification. The question is how solar powered energy systems can work on a local level. To gain insight on this, Industrial Design Engineering PhD student Abhigyan Singh studied energy exchanges in two rural villages in India and discovered that this goes beyond just monetary gain.

Abhigyan Singh developed an interest for the sociocultural aspects of design during his studies in India and Finland. Coming to TU Delft, this passion informed his doctoral research on renewable energy markets. A field in which, according to Singh, there has been too much emphasis on the economic aspect of energy exchanges. “The existing literature mostly talks about trading, which is one form of exchange. The idea of: ‘I have my surplus of energy, the market tells me what value this has, I give it to my neighbour and I get an immediate, quantifiable monetary return.’ Anthropology looks at a broader scope of people’s economic lives, trying to see all the different types of exchanges, not just market exchange.”

Singh, who grew up in India himself, set up a research project in two rural Indian villages. Both were disconnected from the grid and in need of energy. “The question I set out to answer was: if we give control to people to exchange energy with others, would they behave as self-interested individuals, as economics tells us, or would social relations and different types of values influence their choices?”

Two households were picked to be in charge of the solar powered energy infrastructure in their respective villages. They received a solar panel to charge a number of power banks, solar lanterns and LED lights with, which they could sell or give out to the other villagers.

These solar-powered lanterns and lights gave the villagers new possibilities. Women were able to cook after sunset, people could walk out to water the field at night and they no longer had to rely on unhealthy and fire hazardous oil-burners. “One boy told me how his brother once fell asleep while studying next to an oil-based burner and burned his arm. These are common stories. There are so many things these LED lights add to their lives.”

Not all about the money

During his stay at the villages, Singh observed that the energy-givers would trade other things than just money for use of the solar powered lamps. “Contrary to my assumption, I found that they actually refused to accept money from a lot of people and instead asked for services. They would also lower their prices if energy-receivers would tell them that the price was beyond their means.”

“The energy-giving household eventually started to see the system as more than a financial means and saw it also as a social means. They would say: ‘instead of money we want to get access to this irrigation pump you have.’ People were willing to accept this economic risk to secure a service they would need in the future.” Singh visualised the data of all energy exchanges over a period of 11 months in an interactive tool, which was exhibited at Mind the Step exhibition at Dutch Design Week 2017. Based on his findings, Singh recommends designs of payment mechanisms in decentralized energy systems to see a return “not merely as an economic act, but as a complex sociocultural process.”

While the project was only meant to run for three months, the villagers are still using the system now almost three years later, making repairs when needed. “They became owner of it.” 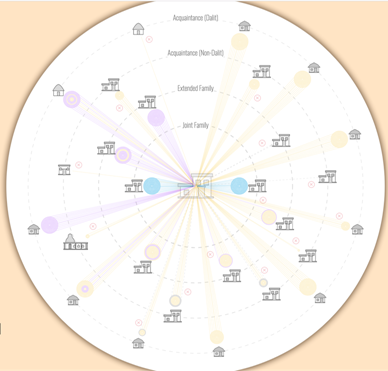 Interactive tool visualizing the data of all energy exchanges

Now, after concluding his PhD, Singh initiated an interdisciplinary research proposal that aims to extend his research findings to develop human-controlled energy exchanges, not just in India, but specifically also in the Netherlands. For this he works in close cooperation with computer-scientists, anthropologists, industrial partners, and non-governmental organisations.

“Money is not the only thing people value. So why are we only thinking about monetary systems when designing energy systems? My proposal is to design an energy exchange system using blockchain, where people can exchange energy without being limited to use of money. Blockchain can enable people to exchange energy as they want and utilize various types of tangible and intangible things as a return. A system which allows people to build social relations around energy and make it fit with how they live life. When I started my PhD there was a lot of scepticism, but now there is a lot of enthusiasm around this idea.”

"The 'global north' and 'global south' are idioms that blind us from the fact that there are 'norths' in the south and there are 'souths' in the north."