The Pearl River Delta in the province of Guangdong in southern China is one of the most rapidly urbanising deltas in the world. More than sixty million people now live in an area approximately half the size of the Netherlands. The pace of developments, combined with the consequences of climate change, are creating a complex set of issues. How can a small country like the Netherlands help out?

In the space of forty years, the delta area in the Pearl River has been transformed from a predominantly agricultural landscape into one of the world’s largest metropolitan areas, encompassing such megacities as Guangzhou, Dongguan, Shenzhen, Zhuhai and Hong Kong. Residential and industrial complexes are being built at breakneck speed. This rapid development is causing such problems as reduced biodiversity and flooding, made worse by excessive rainfall and rising sea levels. There are also looming social problems because generic urbanisation alienates people from their environment, offering no space for them to have any significant interaction with nature. 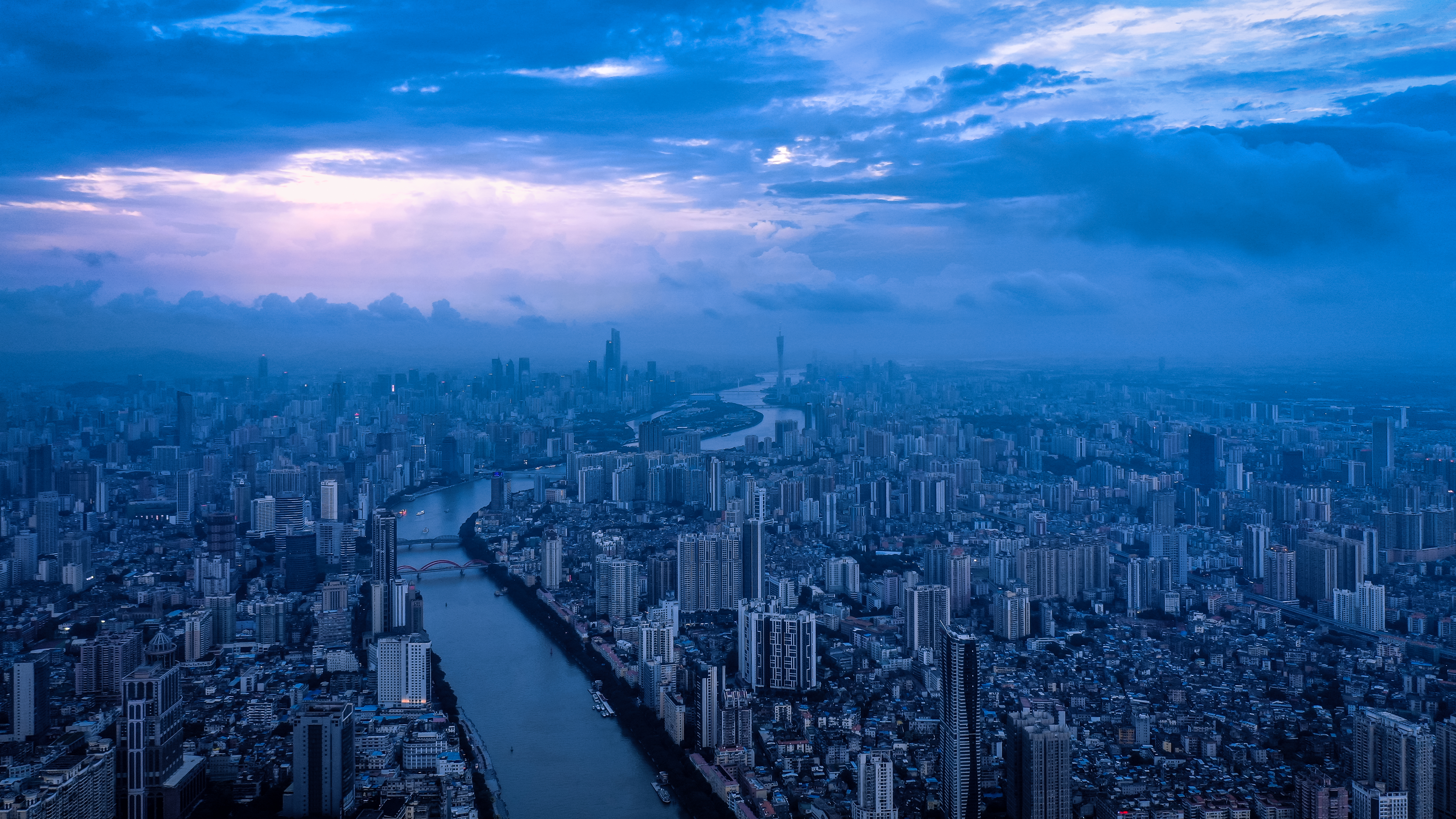 In some parts of the Pearl River Delta, there is barely any room left for the water (photo: Guangyuan Xie)

A good, or rather bad, example of this are the traditional mulberry dyke and fish pond systems, in which close-knit communities operated a circular agricultural system using organic waste from silkworms as fish food and the excrement of the farmed fish as fertiliser for the trees. “Much of the Pearl River Delta used to consist of this type of agriculture that has gradually been transformed over time into just fish ponds, but is now making way for large apartment complexes. Over the course of time, the tall buildings slowly subside because of the soft substrate and these areas are at significant risk of flooding. A better way forward would be to use thorough knowledge of the landscape system as a basis for choosing types of housing that combine well with water storage and take account of the area’s ecology and socio-cultural characteristics,” says Dr Steffen Nijhuis, head of research in the Urbanism department.

Local and regional scale influence each other
In his view, this will contribute to an integrated approach to and a thorough understanding of natural and urban systems and how they influence each other. “In the Netherlands, and at TU Delft in particular, we are driven by an integrated approach in which spatial research and design go hand-in-hand and cover both the regional and local scale – that’s not the case elsewhere in the world.” He points out that the expertise at Delft has developed in this way historically. “We are a small and densely populated country, which means that pressure is increasing on the whole system. That’s why, over the centuries, we’ve developed a system in which local solutions are sought on the basis of a systematic perspective. It’s important to see the urban landscape as a system, which means the regional and local scale influence each other.”
Time is another scale that should also not be forgotten. “Urban systems change over time, which is why a landscape-based adaptive strategy is so important. It’s always possible to find a reactive, short-term solution for something by applying technology, but the long-term implications are often overlooked.”

“In the Pearl River Delta, we can apply lessons that we’ve learned in the Netherlands”

You see the same thing in the Netherlands. In recent centuries, our major rivers were squeezed into a tight straitjacket of dykes. However, because of climate change they had to deal with steadily increasing amounts of meltwater and precipitation, making flooding more likely. “So, when the big system changed, we found ourselves facing problems. Room for the River (Ruimte voor de Rivier) is an excellent solution for controlling that and we are justly proud of it. But it’s actually the consequence of a choice made previously,” explains Nijhuis. “Lessons like this that we have already learned can be very effectively applied in the Pearl River Delta.”

Mangroves are important for ecology and coastal defences, but are disappearing through human intervention (photo: Steffen Nijhuis)

This is currently happening in a project, led by Nijhuis, in which TU Delft is collaborating closely with the South China University of Technology (SCUT) and Sheffield University, funded by the Dutch Research Council (NWO), the National Natural Science Foundation of China (NSFC) and the Engineering and Physical Sciences Research Council (EPSRC). “It was quite extraordinary that our proposal, which took a spatial perspective, was honoured among all the technically-oriented proposals,” says Nijhuis. In his view, this landscape-based approach is actually crucial. “We start by looking at how the natural system fits together, how the water watercourses run, the different ways that the land has been used over the years and how urban development relates to that.”

No landscape without human influence
“When people think of landscape, they primarily think of greenery. Of course, ecological and natural processes are important, but landscape without a socio-cultural dimension is just nature. Moreover, a landscape-based approach is a good way of connecting the present, past and future together. It’s possible to see the landscape as a living system that changes over time. What will be the next layer that you add to it?” he explains. “Even for resilient deltas, you need the interplay between natural and cultural systems. If you take both into account, you notice that you make very different decisions. That can help you to prevent such miseries as water problems or reduced biodiversity or social problems that arise when people no longer feel connected to the place where they’ve always lived.” 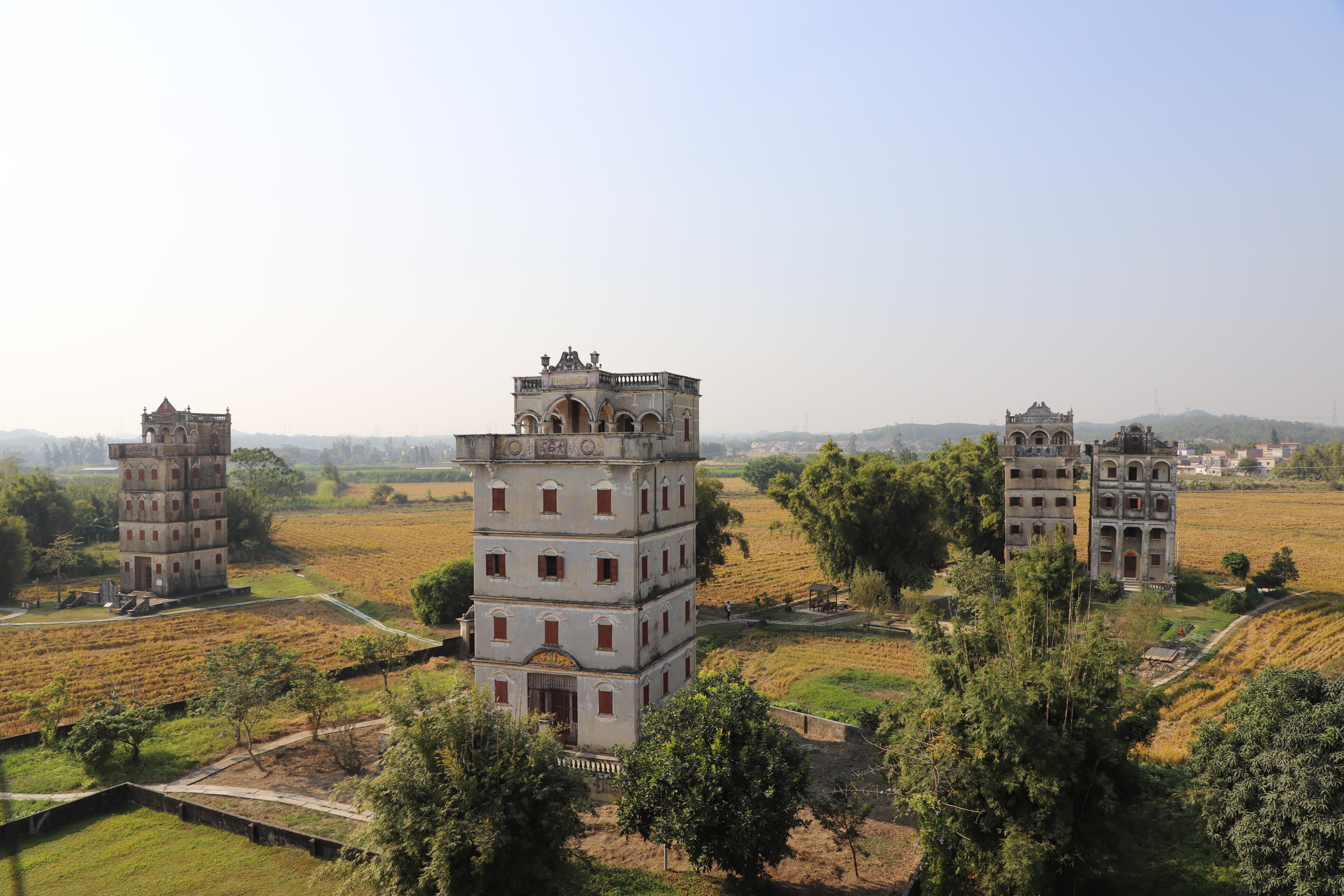 The region has a unique cultural history that reflects a strong connection to the landscape (photo: Steffen Nijhuis)

In the project around fifteen professors, post-docs and doctoral candidates are working together with social partners, including government authorities and the local population. “We really need that local knowledge – as scientists, we don’t know everything. It’s a co-creative process, in which you develop knowledge together, chart problems and then develop plans in which all stakeholders play an important role.” This process is already beginning to yield results. “We’re gradually having an influence on urban development processes with our approach. Different decisions are actually being made on the basis all of this new knowledge.” 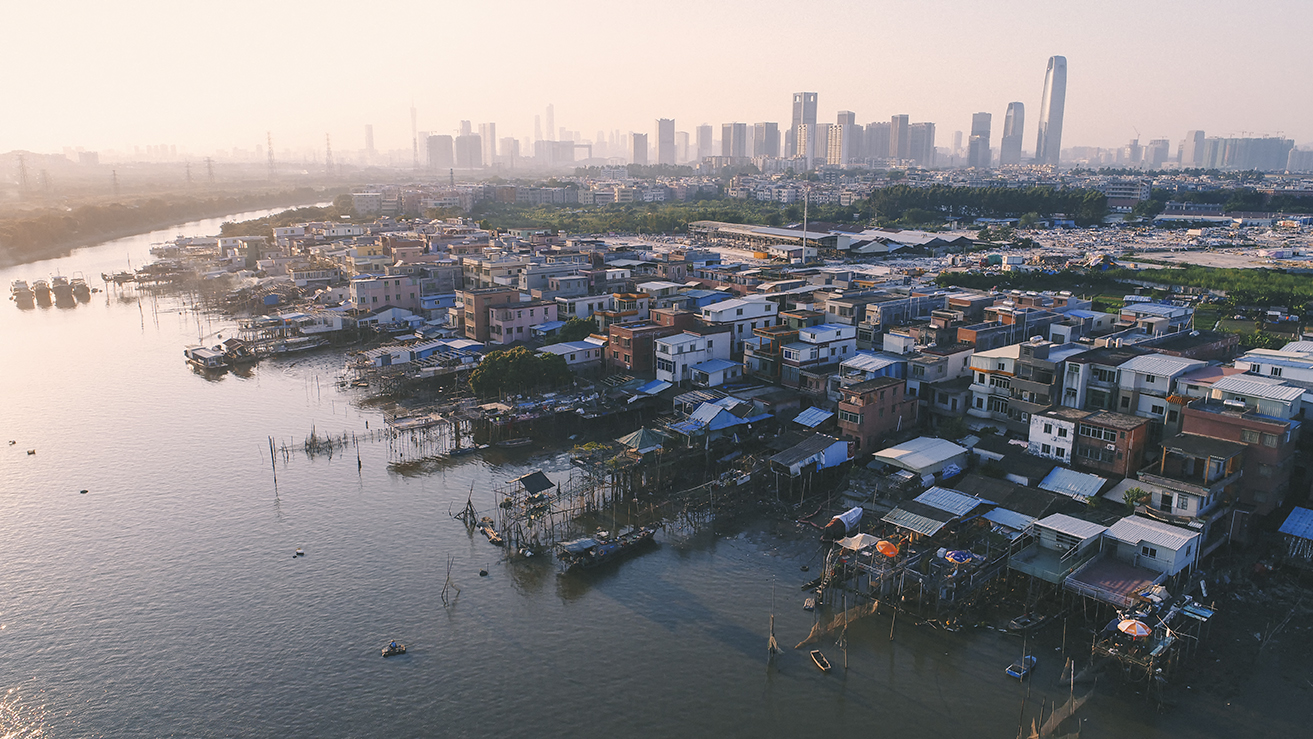 Traditional fishing village, with in the background the encroaching urbanisation (photo: Guangyuan Xie)

Using building typology as inspiration
An example of this can be seen in the Panyu district of Guangzhou where a lot of high-rise buildings are being developed. “Within the context of the urban development programme you usually explore how that can be achieved in the most economical way, but, thanks to our regional approach, we were able to slightly adapt that plan,” explains Nijhuis. “The original fishermen's villages had been built in a specific way to deal with the water. That meant they don’t meet modern requirements for sanitation, etc., but you can still use the building typologies as inspiration. If you understand and apply the principles behind them, the advantages are twofold. On the one hand, you have a safer and more adaptive environment and, on the other, you preserve the cultural identity.”

According to Nijhuis, this is not about blueprints, but about robust structures that keep the area safe, whilst still allowing for flexibility. “You need to create the spatial conditions in which an area like that can continue to develop. It’s not about prescribing what people should do, but providing the principles they can use to shape the urban landscape. Principles about how you can retain water or make a multifunctional flood barrier. How you can make high-quality public spaces, where people enjoy being and where water and nature play a role. There are certain recipes for achieving this and we are attempting to pass them on to people in the area who apply them here.”
If you don’t use these principles, things can go wrong. “Near Shenzhen, for example, you can see mangrove forests that were planted and are now languishing. Unless you have the right conditions, the system won’t come to life: you actually need a mixture of fresh and salt water to create a healthy ecosystem. Currently, rainwater is drained away via sewers. However, if you let the fresh rainwater from the city run into it, you immediately take the pressure off the sewers and create the right conditions for mangrove development. If you shape it nicely, for example by using attractive water features, such as fountains or water basins as part of that rainwater system, it immediately makes the city look more attractive and freshens it up.” 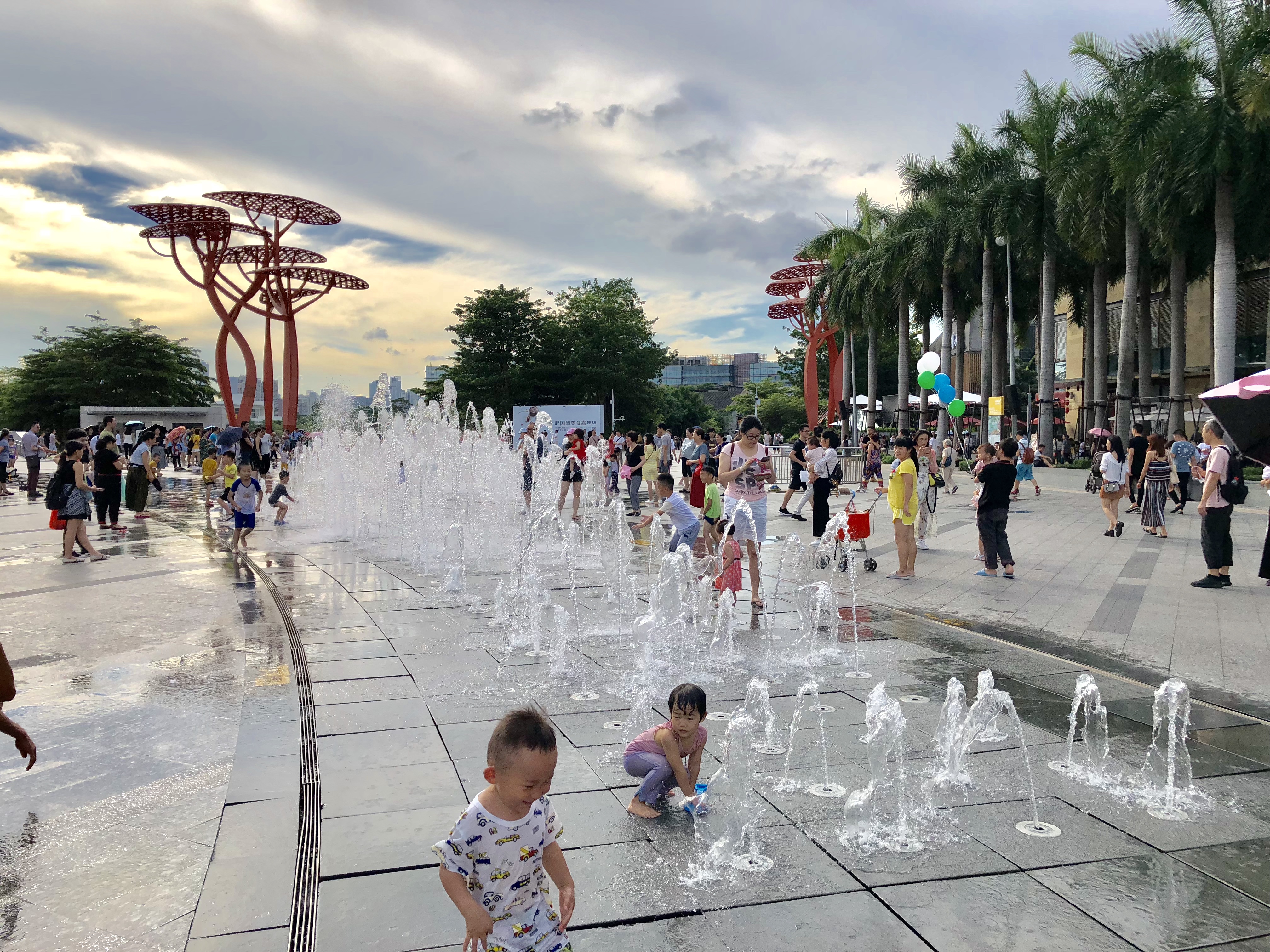 Water in the public space as a play feature and for a pleasant microclimate (photo: Steffen Nijhuis)

Linking together research and education
He also teaches principles like this to his Master’s students in Landscape Architecture. Last year, seven of them did graduation projects on topics relating to the Pearl River Delta. “It’s a great way of linking together research and education, providing students with genuine case studies to work on,” says Nijhuis. Various students explored the transition from manufacturing industry to an economy that is more based on knowledge and technology. “Many factory sites were abandoned. How can you transform them into a new urban area with room for water and nature? You can start by spending a few years cleaning up the contaminated soil with the help of vegetation. After that phytoremediation, you can create residential areas and parks,” explains Nijhuis. Some of the researchers in Delft and China have already completed their doctorates. “This spring, there’s even a double-degree doctoral candidate. The current project runs until 2022 and before that we will explore whether we can extend it.”

Huge impact
A landscape architect by profession, Nijhuis has earned a name for himself in the Netherlands and beyond thanks to his research. He now regularly visits China, where everything is of a different order of magnitude. “At a conference, I explained this approach to thousands of people; with an interview in a journal or via WeChat, you can easily quickly reach tens of thousands of people. The impact is huge,” he says. “The fact that this field is developing so quickly is also interesting. Often, a decision is made today and implemented tomorrow. It is a different story here in the Netherlands.”

The Netherlands still has something to learn when it comes to that responsiveness, and this also applies in other fields. Water, for example: “In China, they have long had a smart approach to water. As in the Netherlands, though, there have been cases in recent decades where rainwater has been drained away as quickly as possible, despite the fact that ingenious systems previously existed for storing and using rainwater. They therefore need to learn from the past and apply those lessons using current knowledge. There’s no need to return to the past, but it’s a shame to throw away the experience of millennia with the bathwater.”