In April of this year, the European Commission became the first in the world to introduce ambitious regulation in the field of artificial intelligence (AI). This strategy, which prioritises citizens’ fundamental rights, is set to have a major influence on how other countries deal with AI regulation, according to Dragoş Tudorache, Member of the European Parliament. However, he also calls for unambiguous regulation, in order to prevent any barriers to innovation.

Tudorache, a Romanian, chairs the Special Committee on Artificial Intelligence in a Digital Age. The committee was established to give the European Parliament greater control over AI. Previously, the subject was fragmented and discussed in various different forums. “There was a need to bring all of those different lines together, in order to gain a better overview”, says Tudorache.

The European Parliament acknowledges the significant role that AI is set to play. Tudorache: “Inevitably, it will become part of everything we do and have a deep impact on society.” AI has the potential to make all human activities “more efficient and sustainable”, from healthcare to public services, the electricity grid, public transport, the business community and industry.

Guiding AI in the right direction

But that potential needs to be exploited and accelerated, according to Tudorache, who is a member of the liberal Renew Europe Group. The political vision is there – the EU has invested heavily in digitalisation and innovation in recent years. And the legislation that has been announced also provides a legal framework (see “Pyramid of risk for the use of AI”). “We now need to actively pursue technological advances, help businesses to grow and ensure that the member states follow suit.”

“We simply can’t afford to do nothing”, he warns. “As the European Union, it is our duty to assert ourselves on the world stage in order to ensure that we guide the social changes brought about by AI in the right direction. We have lost ground compared to the United States and China and must therefore ensure quickly that we have clear policy, clear legislation and the right incentives to enable AI to thrive in Europe.”

Inevitably, it will become part of everything we do and have a deep impact on society.

As chair of the special AI committee, Tudorache has played a role in what he calls “AI diplomacy”, engaging the US and other like-minded partners in recent months. Since President Biden took power in the US, there has been some rapprochement towards the EU. Although big tech companies in Silicon Valley are hesitant about overly strict regulation, it is possible to speak of “shared, fundamental values and democratic understanding”, he says.

This means that the EU and the US are virtually reliant on each other to halt the rise of China and ensure that a “shared EU-US model” becomes the leading standard. The European Commission has already made the first move: a social credit system like the one built in China is being banned.

Pyramid of risk for the use of AI

The AI legislation is based on a so-called “pyramid of risk”, which means that the higher the risk of a certain application is, the stricter the rules are. 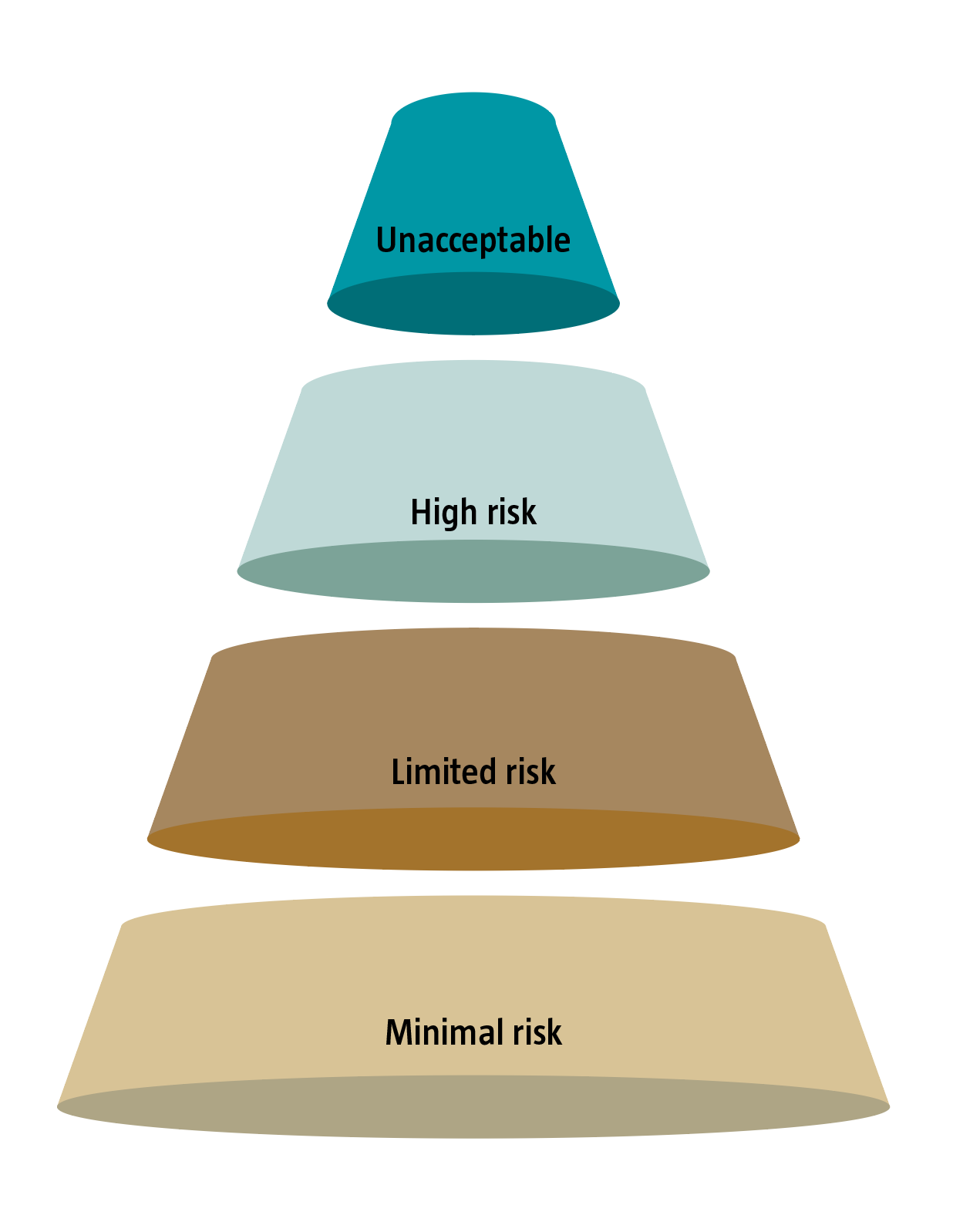 Unacceptable
AI systems that constitute a danger to EU citizens will be rejected, such as the social credit system being used in China.

High risk
This concerns systems in which AI is used to issue mortgages, for example, or the use of AI in job application procedures. In such cases, AI applications will be carefully assessed before being allowed to enter the market.

Limited risk
This applies to AI systems such as chatbots. These must meet minimum transparency requirements, ensuring that users know that they are dealing with AI and can make an informed decision not to use it.

Minimal risk
The most-frequently used AI applications for which no additional rules apply. Think video games based on AI or spam filters.

US and EU’s shared responsibility

“We have very little influence over what China does within its own national borders”, says Tudorache. “But the EU and the US need to ensure that China does not overstep the mark. Chinese views on the use of AI must not become the international standard.”

That is why it is important that the EU has been the first to introduce legislation. Tudorache does not go so far as to say that it will become the worldwide standard, as has happened with GDPR privacy legislation, but “it will certainly influence how other countries set parameters”. He also praises the “human-centred approach”: citizens and their fundamental rights are central to this.

Legally, there are still many unanswered questions, and it’s important for there to be clear technical standards to provide a framework for start-ups and businesses.

No brake on innovation

However, it is important that the new rules do not put a brake on innovation. “Legally, there are still many unanswered questions and it’s important for there to be clear technical standards to provide a framework for start-ups and businesses.” When the European Parliament discusses the legislation, he intends to advocate striking the right balance between regulation and room for entrepreneurship.

It is also important that the different member states do not start implementing EU legislation in different ways. “That causes fragmentation, which would weaken a strong internal market”, he says. Scale is particularly important in the field of data and AI. Only if businesses can access the whole internal market will they be able to compete with big tech companies from the US and China, according to Tudorache.

Universities play a key role in innovation. “They’re often instrumental in setting up alliances with major industrial players and other stakeholders”, Tudorache says. “We need to support that, if we are to remain competitive and attractive for research as a continent. AI needs the brightest minds. We don’t want to see them go elsewhere.”

Do you want to receive your own copy of the magazine?

Send an email to innovation-impactcentre@tudelft.nl