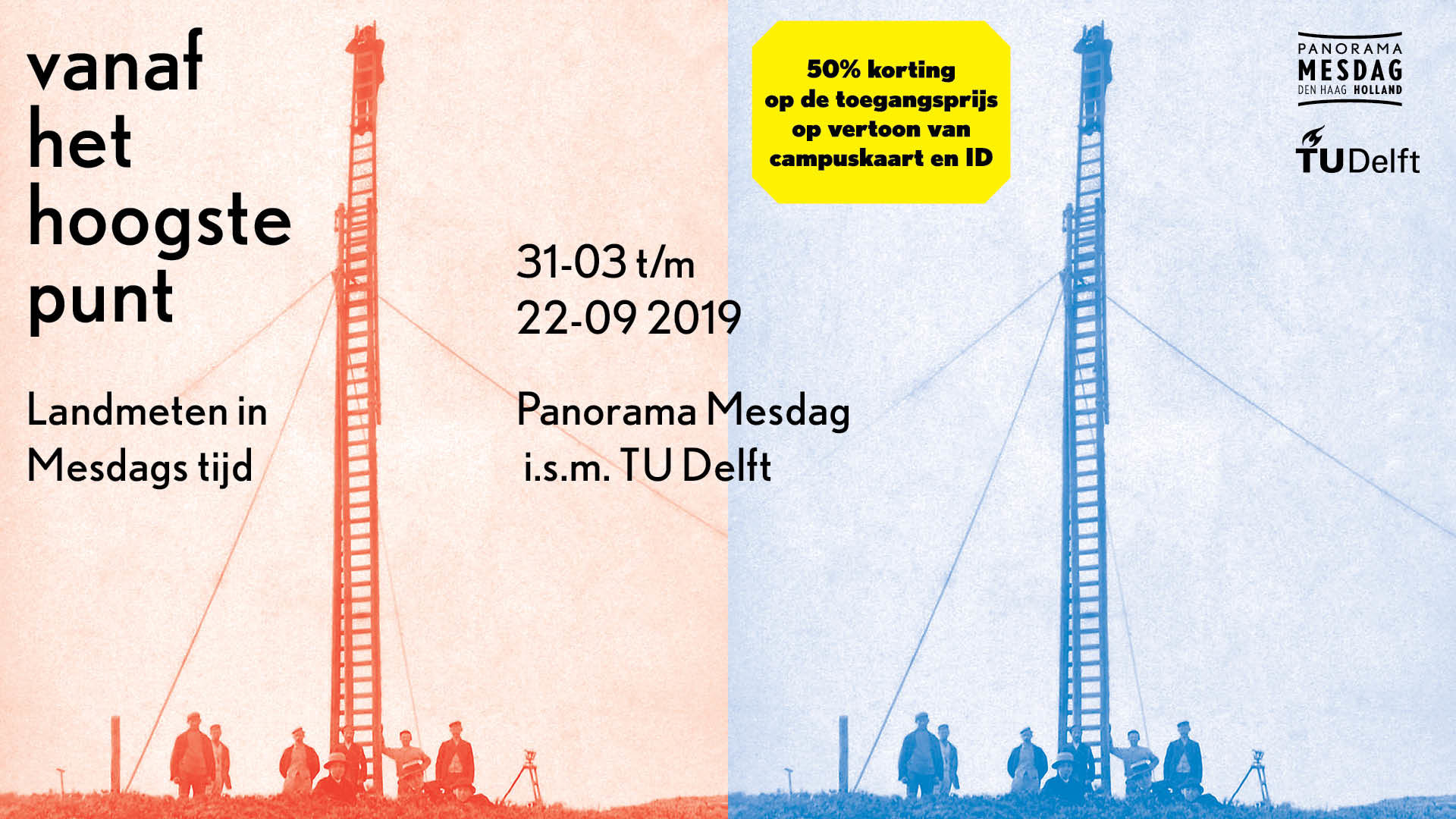 Exhibition "From the highest point: land surveys in the time of Mesdag"

In 1880, as Mesdag stood on the highest dune in Scheveningen making sketches for his Panorama, surveyors were criss-crossing the country to prepare a new map of the Netherlands.

Whether painter or surveyor, the two trades were united in wanting to seek out the highest point in the landscape, although one sought to create an optical illusion while the other wanted to measure distances. How did the approach taken by the artist and by scientists differ?

The exhibition kicks off with a land survey experiment on the Panorama, and then covers the history of land surveying based on the Special Collections of TU Delft Library.

On 3 December 2018, a land survey experiment was carried out on the Panorama by students of TU Delft. Their aim was to find the exact location where Mesdag stood on Seinpost dune. How accurate was he? He wanted every resident of Scheveningen to recognise their village, so how much artistic licence could he allow himself?

Mesdag painted a number of high points, such as the lighthouse, the water tower and the Old Church. Their actual coordinates were compared to their position on the Panorama. The results of this ‘survey in the past’ are presented in the exhibition.

On 1 May 1880, Mesdag signed the contract to paint the Panorama, and the very same day he made a sketch from Seinpost dune in his sketch book. In this sketch, he made a note of all the high points, such as church spires, a process which is not dissimilar to that used by land surveyors.

Mesdag’s approach to the work is illustrated based on sketches, photographs and other objects from the Panorama Mesdag collection. Thanks to careful preparation and the right technical resources, he managed to complete the job, creating a valuable historic document and an artistic highlight.

The period in which Mesdag painted the Panorama coincided with an important scientific project: a land survey of the Netherlands to improve the reliability of existing maps.

The first national land survey was conducted at the start of the 19th century by Cornelis Kraijenhoff. By Mesdag’s era, the National Triangulation Network had just been introduced, representing an expansion and improvement of Kraijenhoff’s project under the governance of a committee. As a result, the process was no longer dependent on a single scientist.

An entire wall of the exhibition space is used to display these photographs, shedding an exciting light on the survey process.

The exhibition includes digital and interactive maps showing the triangulation points used by Kraijenhoff and the National Committee. Visitors are able to wander through the maps and see where the measurements were taken. The maps show how the landscape has constantly changed from the time of Mesdag to the present day.

More about this exhibition

The painter that skipped 10 degrees

A student from TU Delft is conducting a survey in Panorama Mesdag to find out exactly where Hendrik Willem Mesdag stood on the Seinpostduin.

Photograph of a land survey in Terlet, 1889. From the collection of the Land Registry Museum, Arnhem.

Impression of a digital map with the points of the Rijksdriehoeks network. The map shows 8,274 photos of surveys in the period 1880 to 1960.

This repeating circle was in all likelihood used by polymath Cornelis Kraijenhoff (1758–1840) for the first large-scale triangulation of the Netherlands (1802–11). The instrument was made by French instrument maker Etienne Lenoir (1744–1832) according to a design by Jean-Charles de Borda (1733–99). For the metre expedition, a similar instrument was used.