Online education requires a different structure compared to more traditional education. Hence it forced me as course coordinator to think of a better composition of fatigue lecture material, developed from a student perspective. 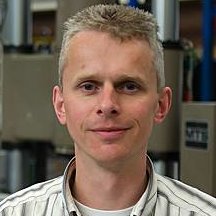 René Alderliesten studied aerospace engineering at the faculty of Aerospace Engineering of TU Delft with a specialization in fatigue damage tolerance of aerospace materials and structures. Based upon his research into the fatigue damage phenomena in Fibre Metal laminates and the development of a model to predict fatigue damage propagation for these laminated materials he obtained his PhD degree from TU Delft.

In 2005 he was appointed as assistant professor within the group of Prof. Rinze Benedictus on structural integrity and damage tolerance of aerospace structures. Initially, the research focused on metallic and FML structures, but in the past years the research has expanded to structures made of fibre reinforced polymer materials. The main theme in the research has been the experimental characterization of damage initiation and formation under mechanical and impact loading with in conjunction the development of mechanistic models to predict the initiation and growth of the failure modes. In 2012 he was appointed associate professor in this field with responsibility over about 3 Post-docs and 10 PhD's.

René Alderliesten has been awarded the Jaap Schijve Award for his research in the field of "Fatigue and Damage Tolerance" during the 2011 Symposium of the International Committee on Aeronautical Fatigue and Structural Integrity in Montreal.