Satellites are the best available instruments to detect man-made pollution worldwide. Now they can also reveal how government measures to combat the spread of the corona virus are changing our air quality. That impact is huge, atmosphere researcher Pieternel Levelt discovered. She helped pioneer OMI and TROPOMI, currently the most advanced satellite instruments to chart harmful pollutants in revealing detail.

The satellite-borne instruments, which are orbiting the earth at a distance of hundreds of kilometers, play a pivotal role in monitoring the harmful pollutants affecting air quality and climate. OMI, the precursor of TROPOMI, was launched in 2004 and remains an important source of data. ‘OMI still holds the record for the longest measurement series of nitrogen dioxide and sulphur dioxide concentrations in the atmosphere. It is still working exceptionally well after 16 years, which is quite rare for satellite instruments,’ Levelt says.

Effect of the coronacrisis

The data gathered by both instruments tell a number of different stories, the most topical being the decrease in air pollution since the arrival of the corona crisis. Since the end of January of this year, when China implemented its emergency measures, the amount of nitrogen dioxide in the air has fallen by an average of 34 percent compared to 2019. In some Chinese cities nitrogen dioxide pollution more than halved. Northern Italy shows a similar pattern, with a reduction of over 40 percent in the skies over Milan. ‘We have never seen such a dramatic fall of nitrogen dioxide emissions before,’ Levelt says. ‘We measured over a period of weeks rather than days to exclude things that might also influence the outcome, like variations in weather.’ 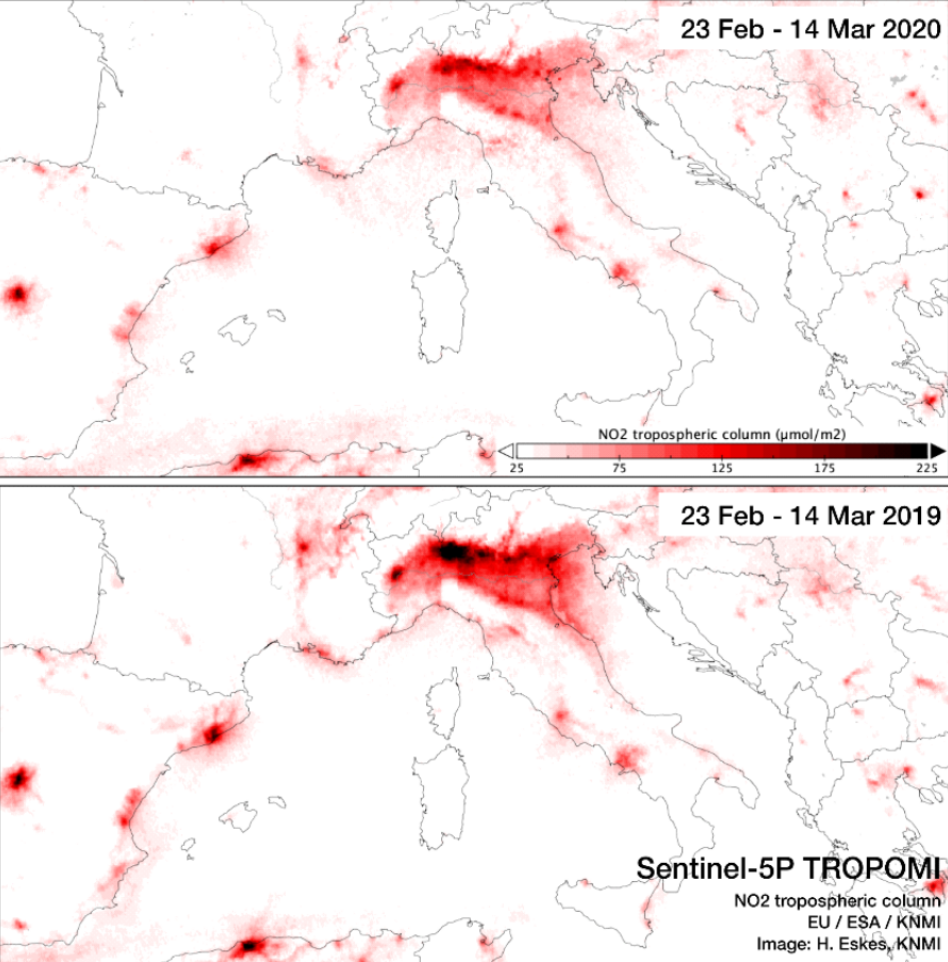 Air pollution in the Netherlands

In the Netherlands too the air was markedly cleaner. Compared to measurements taken at the same time last year, the concentration of nitrogen dioxide fell by 20 to 60 percent. These are estimates and KNMI will be backing them up by performing measurements on the ground. ‘It will take a couple of months at least, Levelt told broadcaster NOS which is monitoring developments closely. ‘Things a bit more complicated here because the weather is very changeable and this has an almost immediate effect on the degree of pollution. It’s not just the wind but the rain as well. A good shower will immediately leave the air a lot cleaner.’ 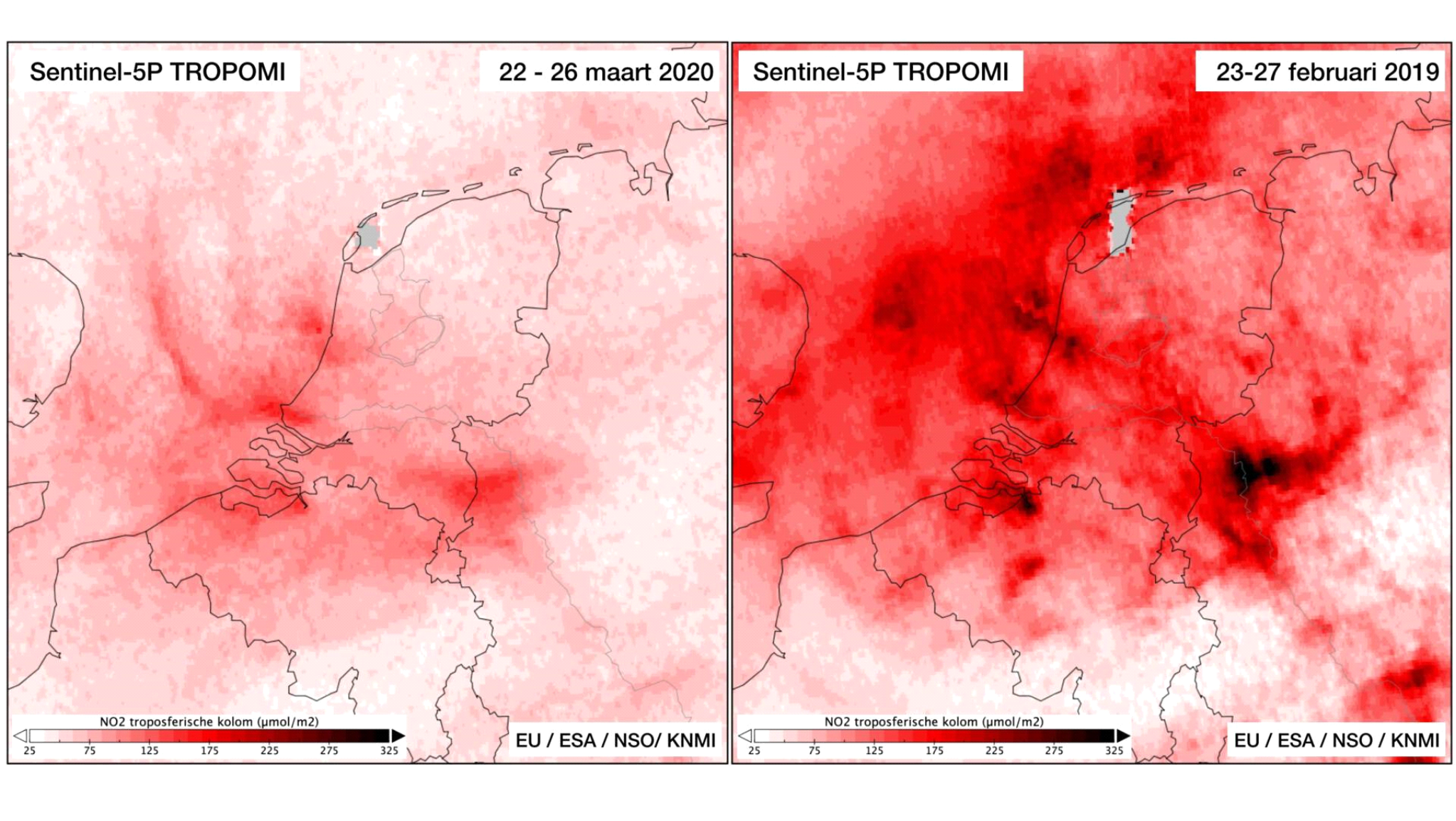 TROPOMI, launched in 2017, differs from its precursor in a number of important aspects. The spatial resolution of the instrument is ten times higher than that of OMI, opening up new scopes of study for researchers. Levelt: ‘TROPOMI has a spatial resolution of about 3.5 by 5.5 kilometres, which makes it possible to identify separate sources of pollution. In a city like Rotterdam we can differentiate between pollution over the port and pollution over the city centre. This kind of information can help to establish if measures taken to combat pollution are having an effect. The resolution also enables us to track a plume of smoke in real time so we get a better insight into the development of emissions from large industrial areas, or the spread of forest fires.’

Apart from nitrogen dioxide, TROPOMI also measures methane and the amount of ozone the troposphere, the lowest layer of the earth’s atmosphere. After CO2 these two greenhouse gases are the main drivers of global warming, Levelt stresses. ‘And ozone is toxic, it’s really fouling up the troposphere. TROPOMI was purpose built to determine the amount of ozone more accurately as well as gain a better understanding of how it affects climate change. Ozone concentrations in the troposphere are still a bit of a mystery, as is the amount of dust particles in the atmosphere. We’re using TROPOMI to work on this too although it’s a slightly trickier proposition.’

There is only one way of shedding light on these matters, Levelt says and that is by collecting more measuring data and building up knowledge. ‘Our main brief is to monitor developments, to deliver accurate and detailed measurements. TROPOMI is by no means the only instrument capable of doing this but its contribution is a very important one.’

Satellite measuring offers a reliable way of monitoring harmful emissions, Levelt concludes. Emissions volumes are currently based mainly on information given out by government bodies and businesses. ‘Satellites are a great addition to existing measuring methods. With just one satellite we can chart the pollution caused by certain compounds, not just in the Netherlands but across the planet.’

The TROPOMI project is being carried out on behalf of the Netherlands Space Office (NSO) and is financed by the ministry of Economic Affairs and Climate Policy, the ministry of Education, Culture and Science and European Space Agency ESA.

The TROPOMI-instrument was designed and built on behalf of the Dutch government and European Space Agency ESA. TROPOMI is situated on board the European Sentinel 5 Precursor satellite and is part of the EU Copernicus earth observation programme. The principal investigator and co-investigator were recruited from the ranks of KNMI and SRON respectively. TROPOMI’s main contractor is Airbus Defence and Space Nederland. The opto-mechanical design is by TNO. The development of the TROPOMI data products is a joint project partnered by institutes from the Netherlands, Germany, Belgium, Great Britain and Finland.

Read more stories of the faculty of Civil Engineering and Geosciences 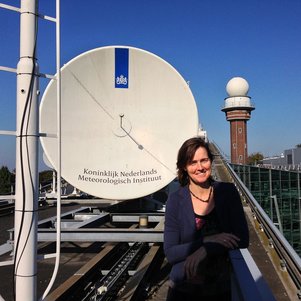