If it is up to Patrizio Manganiello, the city of the future will not only run on solar energy, but we will also use the solar infrastructure for lightning-fast communication. Buildings will autonomously regulate how power is distributed between them and self-driving cars will use light signals to coordinate their driving manoeuvres. The new field of research called Photovoltatronics is bringing this future closer.

Electrical engineer Patrizio Manganiello was sitting in a lecture in Italy at the start of this millennium when he was suddenly hit by the undeniable reality of the disturbing headlines. During a course on renewable energy sources, his professor showed the students two graphs; one displayed the trend in global energy consumption, steeply rising like the flank of a mountain, while the other showed a red line, zigzagging but clearly going up. This was the surface temperature on earth. ‘The professor factually described the correlation between the two graphs, explaining why it is so important for us to find alternative ways to produce energy,’ says Manganiello. It was this eye-opener that drove him to devote his time to the search for smart alternatives for sustainable energy production.

In the Photovoltatronics research group we see a future based on solar energy. 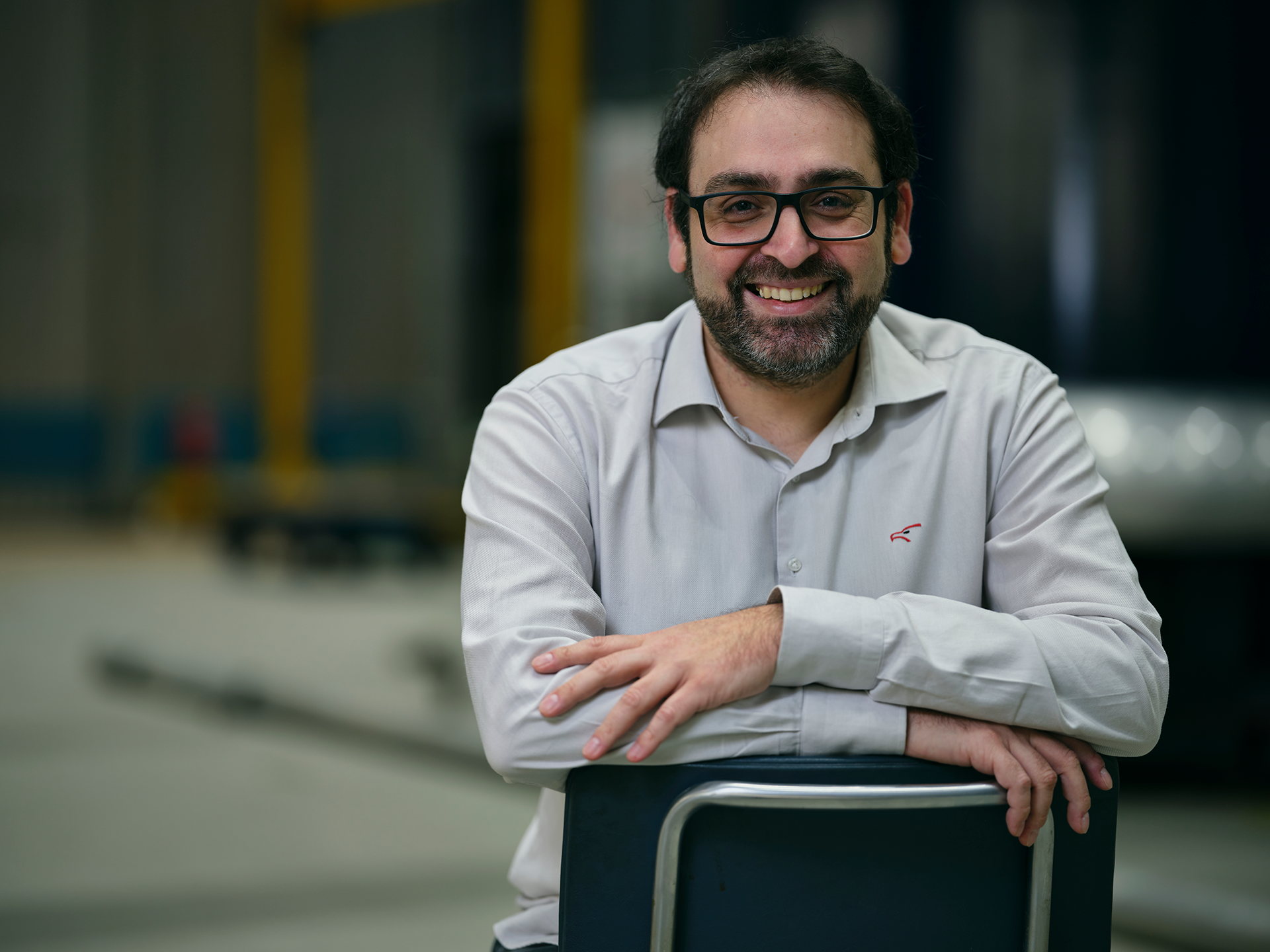 Nearly twenty years later, Manganiello is now plunging into the new research field of Photovoltatronics, where solar cells and electronics merge. In a nutshell, he wants to design solar cells that not only convert light into energy but are also able to send and receive information. This would not only concern information about the operation of the network of solar cells, but also other types of information, such as an impending disaster. Manganiello sees his work as a necessary search for a sustainable but above all fascinating future, a future in which solar panels exchange information to optimise their operation and self-driving cars use solar cells to communicate information about routes and traffic safety. ‘Almost anything you can imagine is possible.’

Manganiello compares the current solar infrastructure with a creature that cannot see or feel. It is his ambition to provide solar cells and modules (groups of electrically connected solar cells) with these senses and enable them to communicate with each other and with the world. The crux of the technology involves deploying the existing infrastructure of a solar cell not only to convert light (photons) into charged particles (electrons), but also to provide them with sensors that can extract information from the light waves and enable them to broadcast their own light messages using LEDs or other light sources.

But Manganiello also has plenty of ideas for more creative applications for integrating energy generation and information transfer, in particular as part of the increasingly wide-scale integration of solar cells in urban environments in the coming years, where solar cells could be built into windows and walls, but also indoors to capture and reuse energy from artificial light. For example, a desktop covered with solar cells could convert the light produced by a desk lamp into energy to wirelessly charge a phone.

The electrical engineer holds his outstretched hands in front of his chest to illustrate two buildings opposite each other in his vision of the city of the future. If their walls can not only generate energy, but also exchange information through multifunctional solar panels, the buildings will be able to communicate with each other. For example, one building could report that too many washing machines are being used in it and that it requires extra power from its neighbour. Or they could share an internet connection using light signals. This could be of real benefit with the increasing scarcity of radio waves used for Wi-Fi. In time, all the buildings in a city will be able communicate with each other and warn each other in the event of a fire, storm or flood, for example. ‘LED lights in an office building could send a signal to a sensor on your phone warning you to leave the building,’ says Manganiello.

Patrizio wants to design solar cells that not only convert light into energy but are also able to send and receive information.

Manganiello explains that he has thousands of ideas for experiments to bring these futuristic scenarios closer. ‘Unfortunately, at any given moment we can only work on a tiny percentage of these, which is what I find most frustrating about my work.’ He estimates that it will take about 10 to 15 years before new buildings will be able to communicate with each other through solar cells built in to their walls, however the first applications should start to appear in the coming decade.

Manganiello is impatient to get moving. ‘Energy is playing an increasingly important role in our lives. Our biggest fear today is that our battery will run out,’ he says. The graphs that made such an impression on him as a student twenty years ago have shot up even further. ‘I want to believe that we can solve this, but when I see how societies, governments and the industry are responding to these issues, I sometimes lose heart.’ He sighs deeply when asked to provide an example of such a response. ‘The main problem is the resounding lack of a response, and the low priority given to sustainability.’ 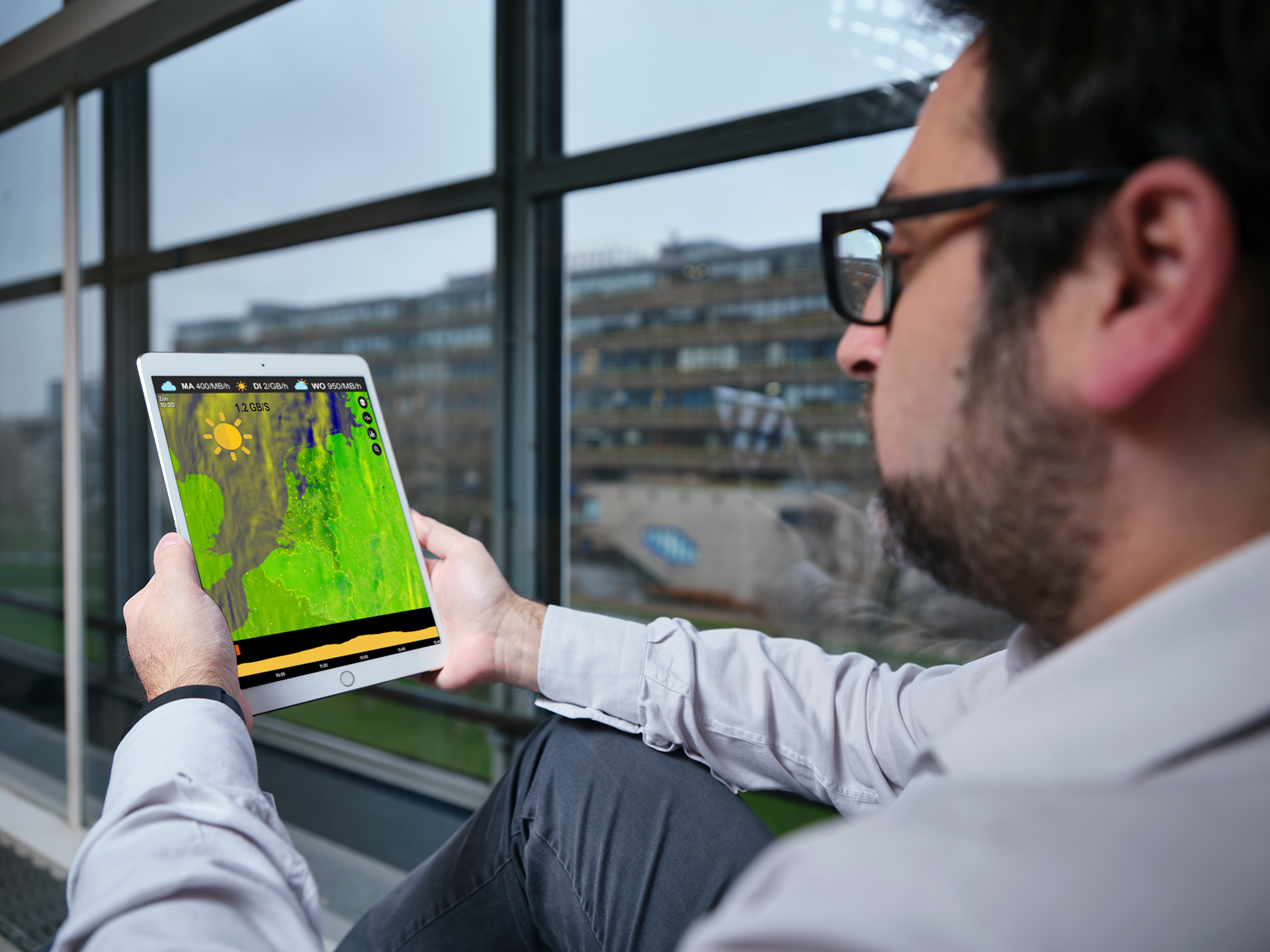 In time, all the buildings in a city will be able communicate with each other and warn each other in the event of a fire, storm or flood, for example.

Despite the severity of the problem, optimism and fascination still prevail in the interview with Manganiello. He concludes by sharing his favourite scenario for a sustainable future that the Photovoltatronics group hopes to achieve. He describes two cars, covered with solar cells which provide a large part of their energy. A deer suddenly jumps out in front of the foremost car. Even before it has applied the brakes, its rear lights rapidly transmit a signal to the solar cells on the vehicle behind: ‘Warning, I’m about to brake!’ At the same time, the urban traffic control centre sends signals via street lamps to solar cells on the roofs of passing cars to control traffic and prevent congestion and air pollution hotspots.

‘I think this is the best example, because safety is the main bottleneck in the development of self-driving cars, while this technology can make life easier and more sustainable. I think the Photovoltatronics research group can provide an important boost to the development of self-driving cars, and it is a privilege to be able to contribute to this.’