CO₂ is not a waste product but a raw material!

To reach the 2050 climate targets, we must give up fossil fuels and fossil raw materials, and switch to circular carbon. ‘It will take a while to work out all the details,’ say TU Delft professors Wiebren de Jong (Large-Scale Energy Storage) and Earl Goetheer (Electrochemical conversion of CO2) . ‘But in thirty years time, the chemical industry as we now know it will no longer exist.’

Capturing CO2 from flue gases, and soon also directly from earth’s atmosphere, is an important strategy in reaching our climate targets. We also already have the technology to store the captured CO2 underground – in empty gas fields in the North Sea, for example. ‘But rather than labelling CO2 as a waste product, it is much more interesting to think of it as a reusable, and thereby sustainable, raw material,’ Earl Goetheer says. ‘Carbon is, and will continue to be, the basis of fuels, plastics, solvents, you name it. We have to set course towards the circular use of raw materials.’ From a thermodynamics point of view, CO2 indeed is at the bottom of the scale – it always costs energy to turn it into something useful. ‘The energy transition and the raw materials transition go hand in hand,’ Wiebren de Jong says. ‘The chemical processes underlying Carbon Capture and Utilisation will have to make use of sustainable energy. Such energy is scarce, expensive, and not continually available.’ 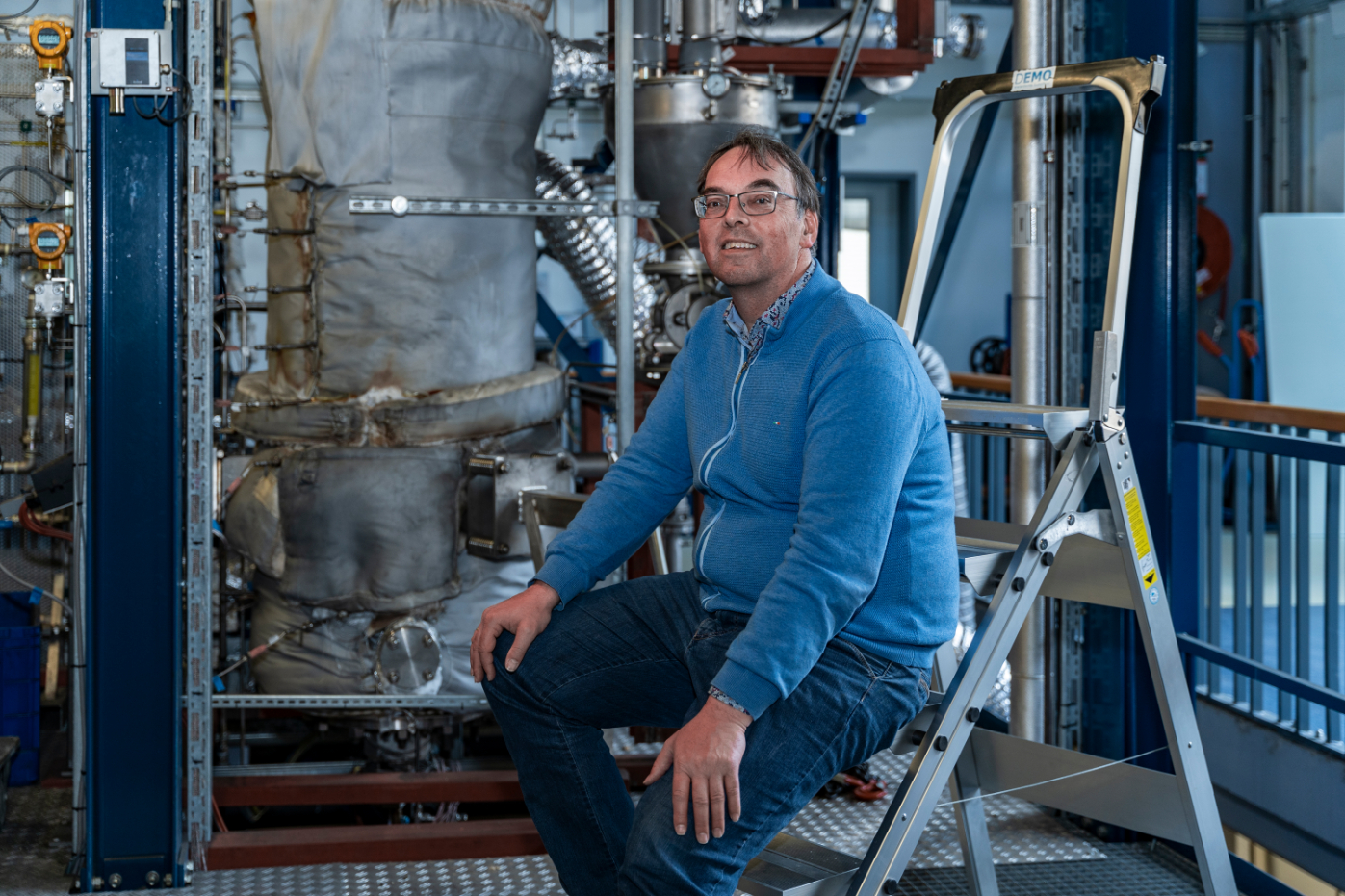 Rather than CO2 being a waste product, it is much more interesting to think of it as a reusable, and thereby sustainable, raw material.

Technology from here, energy from elsewhere

In the Netherlands, green electricity will always be relatively expensive. Insufficient space, a watery sun, no waterpower, although offshore wind may be of interest. ‘It makes sense to concentrate high-energy processes in regions such as the Sahara, Chili or the Middle East,’ De Jong says. A large reduction in the global use of fossil fuels and fossil raw materials can already be achieved with the sustainable production of only a handful of bulk chemicals –  syngas, methanol, and ethylene, for example. Countries such as the Netherlands can play a role in the subsequent conversion of these bulk materials into fine and specialty chemicals. Goetheer: ‘It doesn’t make sense to do everything here, in the Netherlands. We should focus on developing and exporting the technology required for sustainable processing. We have the universities, research institutes such as TNO, and the companies. This know-how is in our DNA.’

We have to redesign chemical processes for them to operate dynamically. 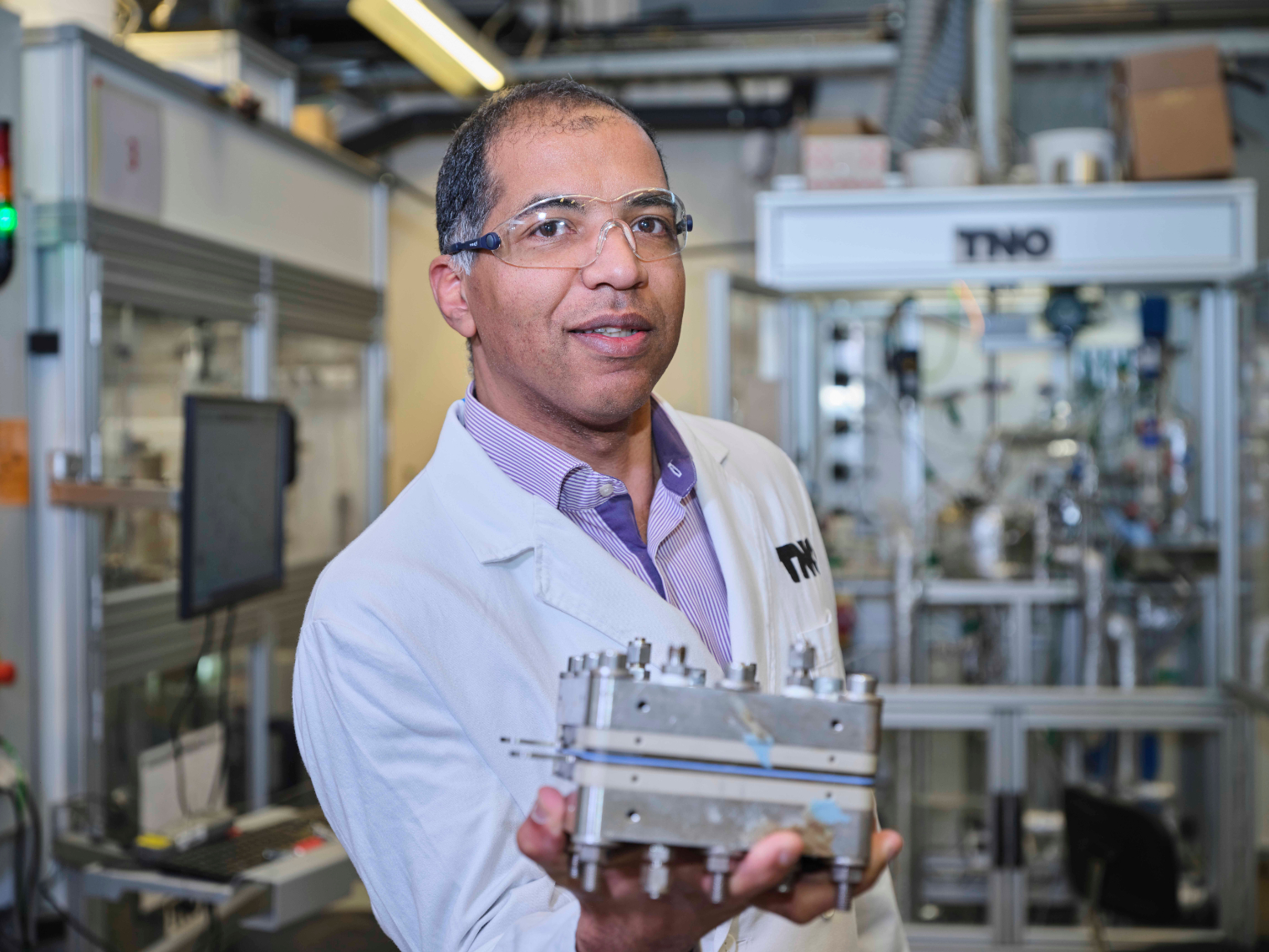 De Jong is specialised in the sustainable conversion of CO2 by means of the so-called indirect route, using green electricity and green hydrogen. Together with several other (technical) universities he recently submitted a large-scale NWO Perspectief programme proposal, named COURAGE. In collaboration with industry partners, they aim for a dynamic process design – one that can cope with fluctuations in the amount of available green energy, green hydrogen, and, sometimes, fluctuations in CO2­ quality. De Jong: ‘Selectivity is an important aspect. Especially when operating dynamically, you want to produce only that one desired end-product. Without such selectivity, you may need to add tens of further separation phases that are very costly in terms of energy use.’ In realising the energy and raw materials transition, it is also important to ensure that upscaling in one part of the chain doesn’t cause downstream (or upstream) problems. ‘Within COURAGE, we therefore collaborate with parties representing the entire value chain. The TU Delft e-Refinery institute is a multi-faculty collaboration for that same reason.’

The focus of Goetheer’s research lies a bit more upstream in the value chain, at the interface of CO2 capture and its conversion. Traditionally, CO2 is first captured using an absorption liquid, subsequently removed from this liquid and purified, to only then be used in a conversion process. Goetheer: ‘At our university, we have the fundamental knowledge to combine these processes, achieving an advantage in both efficiency and cost. We have already developed small, lab-scale reactors. We now want to scale these up.’ The main challenges pertain to the stability of the materials used and the reactor as a whole. ‘We don’t want replace a membrane or an electrode on a daily or weekly basis.’

Process intensification allows us to achieve advantages in both efficiency and cost. 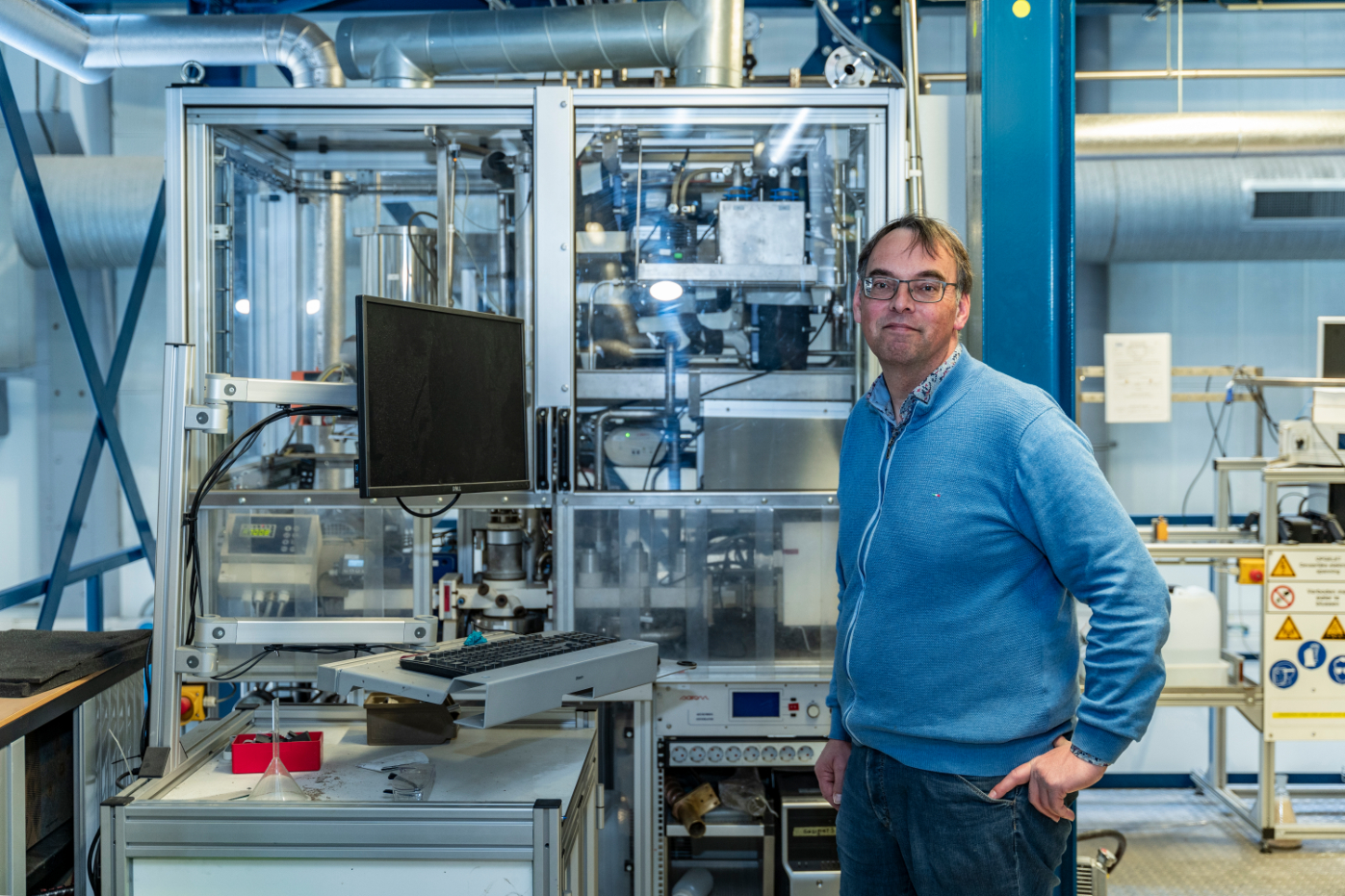 The year 2050 seems very far away, but it takes a good twenty to thirty years to get from a good idea to its full-scale commercial implementation. The only reason we are ready to go ahead with carbon storage in the Netherlands (and in Norway) is because, at the turn of the millennium, the government encouraged universities and industry to collaborate on this topic. ‘From here on, it is a matter of deploying and further optimising this technology,’ Goetheer says. ‘We can be really proud of what we have accomplished.’ Carbon utilisation, however, is still in its infancy. De Jong: ‘People tend to think that CO2 conversion is ready to be commercialised. That is not the case. The indirect route of converting CO2 using hydrogen is further advanced when compared to direct electrocatalysis. But for both processes, the underlying technology is a point where it still needs to be almost completely reinvented.’

The young generation is the future

We need good ideas now and there is no time to relax. ‘Most solutions will come from the young generation that is currently being educated,’ De Jong says. ‘Their education, and the associated infrastructure, are of the utmost importance. This is a core focus of TU Delft.’ Goetheer agrees: ‘Nothing is more gratifying than having a student contemplate an idea and tell you that “there is a smarter way.”’ The government has an important role to play as well. Goetheer: ‘They set the direction of developments, by investing and through the Emissions Trading System. Incentivising companies also requires a long-term strategy and a level playing field.’

Carbon Capture and Utilisation is extremely important, but it only one part of an integral approach to achieve the required raw materials transition. ‘Sustainable transport and large-scale (seasonal) storage of sustainable energy are also part of the equation,’ De Jong says. ‘And so are the mechanical and chemical recycling of plastics.’ As far as Goetheer is concerned, the Netherlands will establish an entire industry for building the high-tech systems that will make all these processes ecologically and economically feasible. Having been trained as a process engineer, it saddens him that all those beautiful refineries along the Botlek will disappear. ‘We will have to tear all of them down and replace them with something completely new. A monumental task.’

Most solutions will come from the young generation that is currently being educated,’ De Jong says. Goetheer agrees: ‘Nothing is more gratifying than having a student contemplate an idea and tell you that “there is a smarter way.” 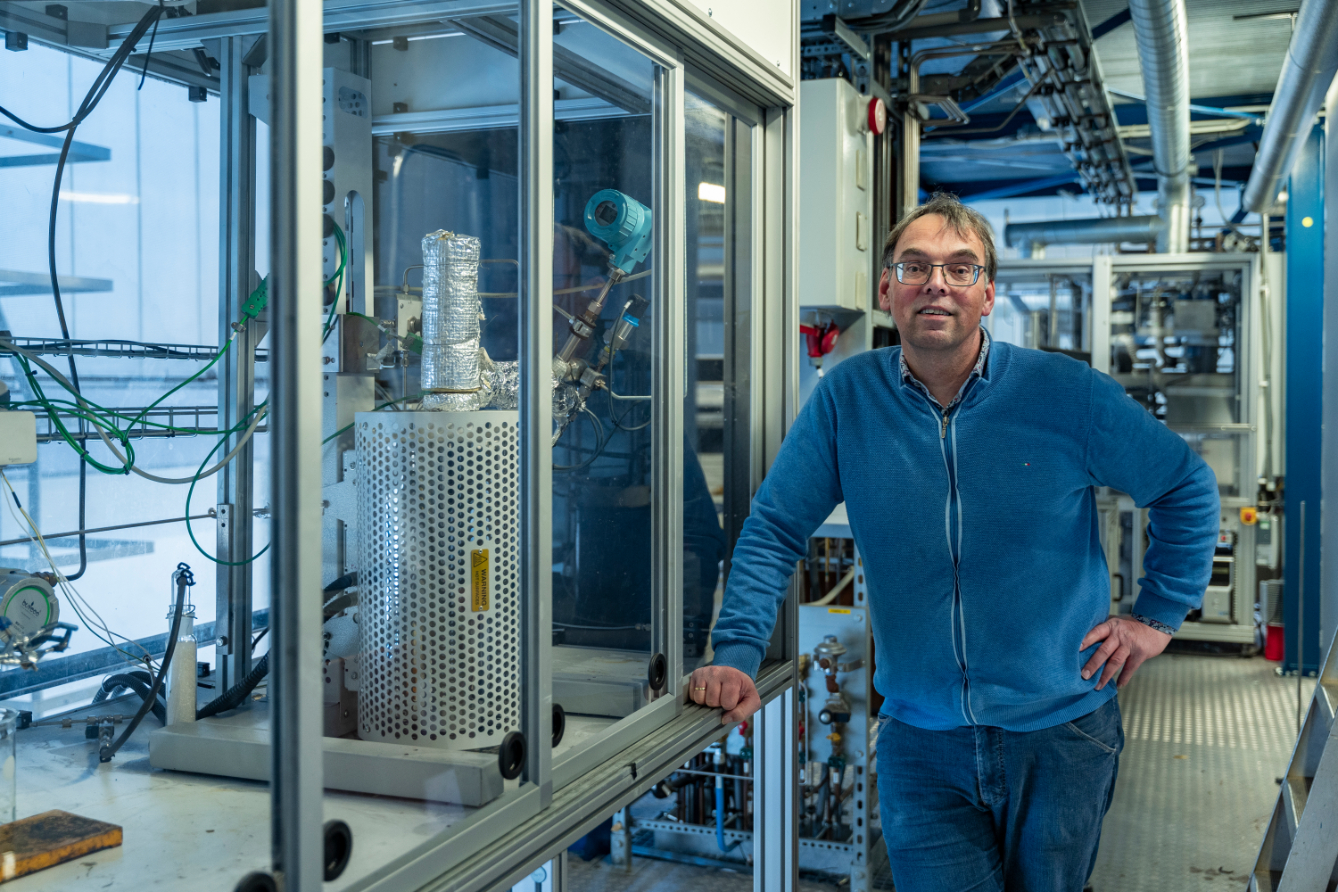 Wiebren de Jong is professor in the department of Process & Energy at the faculty of Mechanical, Maritime and Materials Engineering (3mE). He investigates novel process concepts for large-scale (seasonal) storage of sustainable electricity as well as for its conversion into fuels and bulk chemicals. All of this integrated with biomass conversion.

Earl Goetheer is standard bearer and principal scientist of process technology at TNO (Netherlands Organisation for Applied Scientific Research). He is also part-time professor in the department of Process & Energy at the faculty of Mechanical, Maritime and Materials Engineering (3mE). His research focusses on the sustainable electrochemical conversion of CO2 into valuable commodity and specialty chemicals. 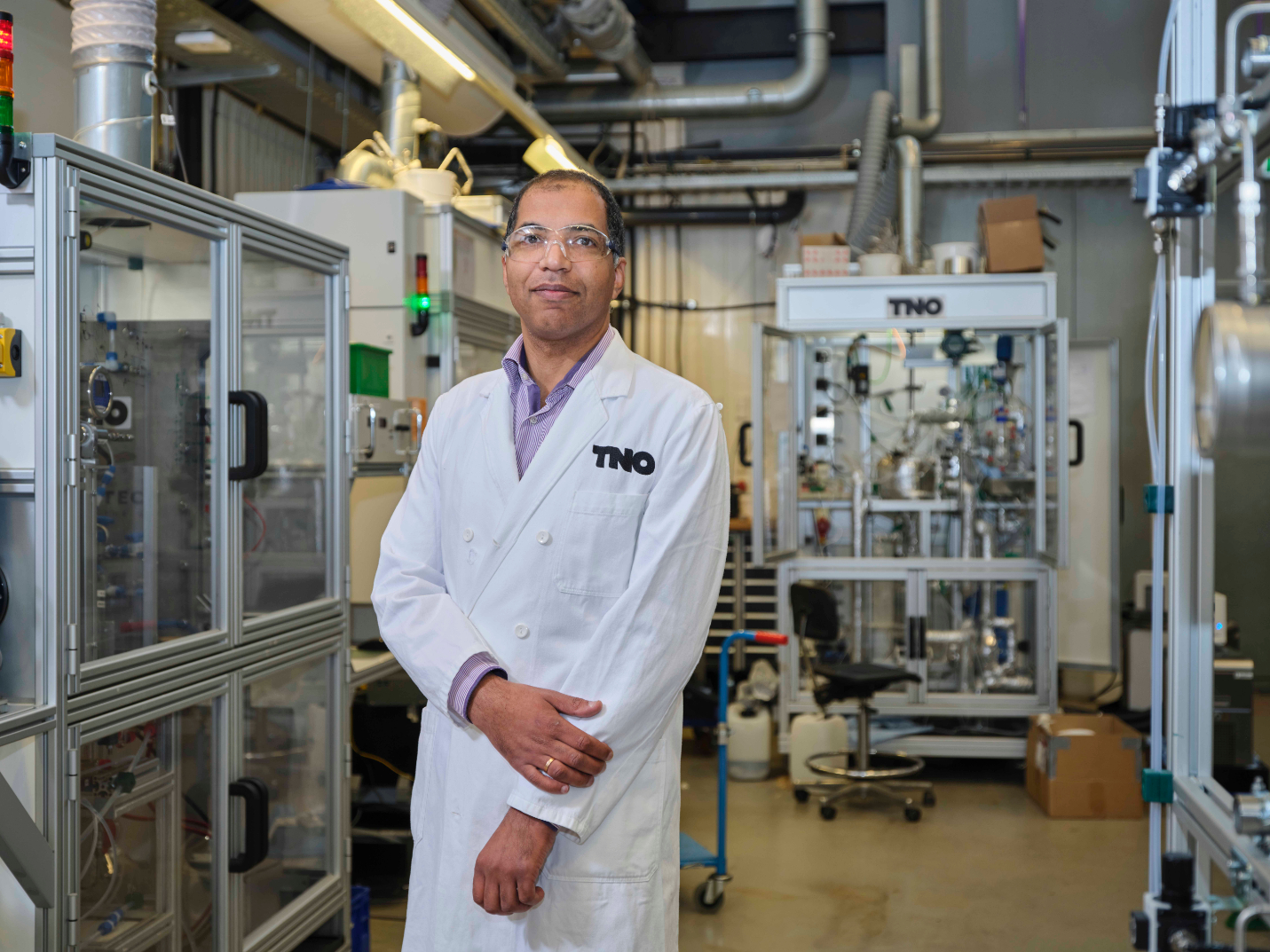 This is a story of Faculty of Mechanical, Maritime and Materials Engineering (3mE)