While the buildings were virtually empty and an icy silence filled the corridors, colleagues in Service Cluster 3 continued their hard work after the outbreak of coronavirus.

The cluster covers 100,000 m2: the faculties of 3mE and IDE, the EB office, Coffee & Bikes and a few other locations. ‘We’re responsible for day-to-day services, such as educational support, cleaning, furniture, removal service, signage, access and registration systems, postal deliveries.

Even in normal times, that is quite a challenge. ‘3mE is the faculty with the most students and its programmes are incredibly popular. That’s great for TU Delft, but creates quite a job for our department. Our main focus in recent years has been on bringing the departments closer together and clustering facilities in order to make room for new programmes’, says Will Sneekes, cluster foreman. Guido Hellemons, member of services staff and in-house emergency response (BHV) coordinator is also hard at work on this. ‘Relocations and everything associated with them is one of my key jobs, and I’m also responsible for the intelligent key management across campus. We work for so many people, all with different needs. No two days are the same, which is what makes the work so much fun.’

Late February, work began to take a different turn. Ensink: ‘At the time, the virus was still mainly in China, but we suspected it might reach here. Facility management and the service teams put their heads together to devise some hygiene measures. We remembered the norovirus outbreak in 2014 all too clearly. We started hanging up posters with guidance on hand washing in all of the toilets, lifts and kitchens, more than 2,000 rooms on the campus altogether. Instructions were continually being added, so we had to replace the posters four times.’ And it did not stop there. ‘There needed to be sanitiser units and, later, the social-distancing rules had to be introduced. That involved charting out walking routes and adapting signage. We put up countless stickers.’

When March arrived, almost everyone went home. ‘Every week, we held a start-up meeting to discuss the repercussions of online working for facilities, such as printing and coffee machines. We thought of everything. We went into all of the kitchens to empty the fridges, because people had left all kinds of things behind’, says Ensink. ‘Students weren’t allowed access, but there were opportunities to hand in work, because not everything can be done digitally. For that reason, there was a printer available at IDE.’ Sneekes: ‘Word spread like wildfire and students from other faculties also came here, so we made a second printer available.’

They were also busy registering items that were being taken home. ‘Lots of people came to collect their screens and a good office chair and everything had to be recorded.’ However, students’ things were often left behind. ‘At the start of the long vacation, we always empty all the lockers for maintenance and repair. If there’s still anything in them, it’s stored in the basement, but this year we had four times as much to store as normal’, explains Hellemons. There were also numerous neglected plants. ‘Staff asked us if we would water the plants, but we had to disappoint them: we really didn’t have time for that’, says Ensink. That’s why it was probably only plants with a maintenance contract that survived lockdown. 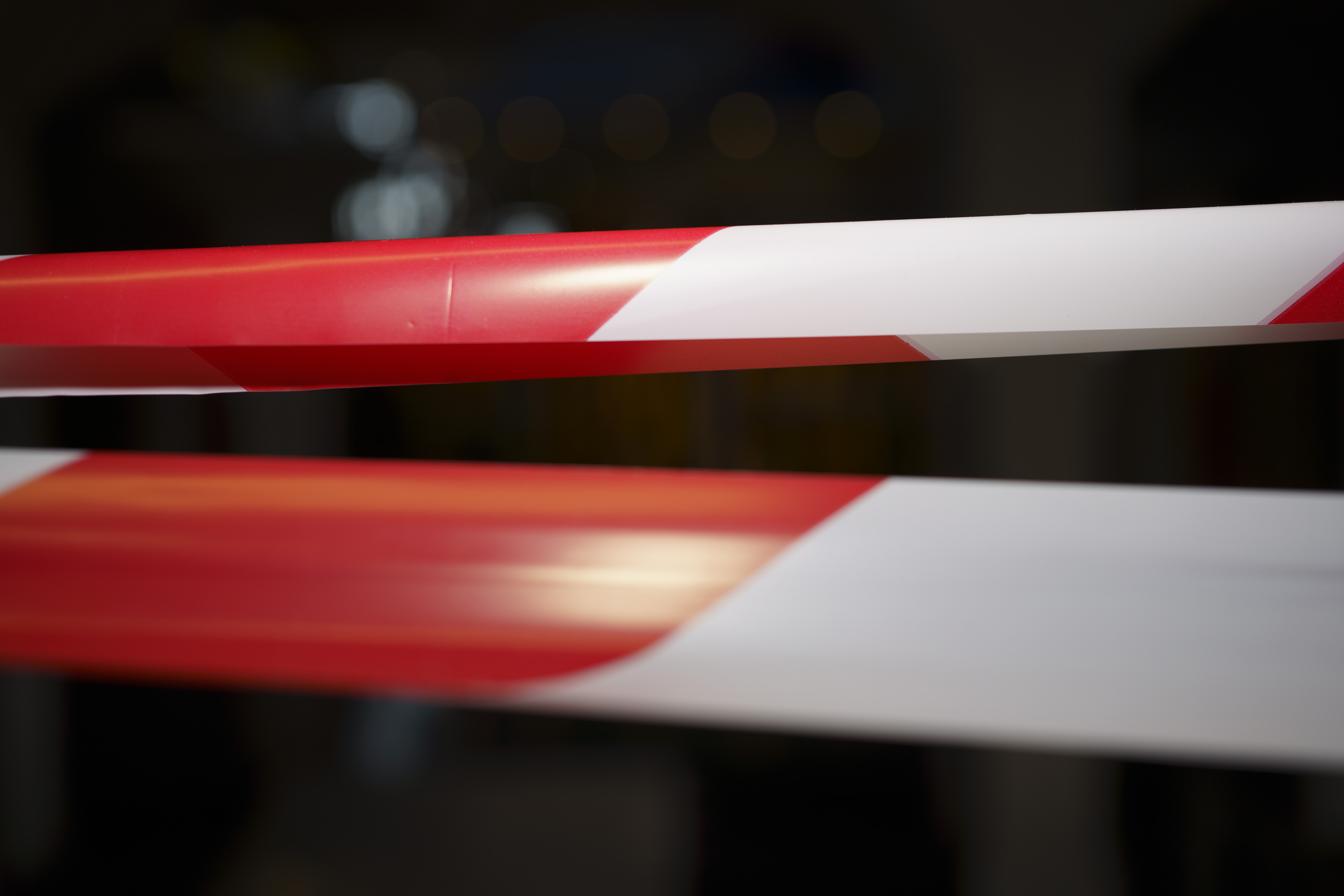 ‘For all of this, the fact that all three of us are part of the IDE and 3mE crisis teams made a real difference’, says Sneekes. ‘That ensured we knew everything first-hand and were able to take rapid action. The lines of communication were nice and short.’ Hellemons: ‘One of the earliest decisions was that only one entrance would be permitted to be used per building. Of course, the other doors have to open in emergencies, so restructuring the access system was quite a complex process. After that, we had to add other doors back in one by one. You’re continually working to organise everything in line with the measures set by the crisis team.’ Now, everyone who enters a building anywhere on campus is recorded: ‘The statistics are important, because only twenty percent of students and staff are permitted to be present. This enables us to show that we haven’t exceeded that.’

‘In the end, we had to assess every room in terms of how many people were allowed in them. We literally went through the building armed with tape measures to see what adaptations needed to be made. That was quite a tedious task’, says Ensink. Hellemons: ‘All classrooms had to be made Covid-proof, enabling everyone to work at a distance of 1.5 m. Any furniture that was then redundant is in temporary storage. That’s thousands of chairs and tables. The specific demands of the faculty came on top of that, for example wanting to have students working in groups at a table. That meant that we had to install plexiglass.’ Ensink: ‘It's better to say what’s permitted, rather than what’s forbidden. That’s why we developed a sticker at IDE that says “Please take this seat”, because it sounds a bit friendlier.’

For safety’s sake, tie wraps were used in the classrooms to ensure that some of the chairs definitely could not be used. ‘We know what our students are like’, says Ensink. But they mainly have sympathy for the students. Sneekes: ‘They also come here for the student life, parties and having fun. Now, almost nothing is allowed. At 3mE, we responded to that with the Faculty Student Council. We ran a competition asking students: Think up something fun that’s within the rules and that cheers you up as a student. We received 300 ideas! The best will win a prize. The only condition is that it needs to be feasible in practice: Something like coffee cups printed with the slogan “I'm a socially-distanced drinker”.’

Students come here for the student life, parties and having fun. Now, almost nothing is allowed

IDE students also showed their creative side. Sneekes: ‘The annual IDE festival for 1,900 students was organised online. Students were able to chat online and share videos of them dancing. The DJs were also properly socially distanced. They made a really good job of it.’ However, they can also be too creative at times. ’A lecturer came up with the idea of getting students to explore what social distancing is like for blind people. They were supposed to do it outside, but because it was raining, the students walked through the hall with face masks over their eyes. The result was total confusion. We had to report it, because it’s a threat to safety’, says Ensink. Sneekes: ‘This is not a good time for creative people – normally, rules can be ignored for creativity, but that’s not possible at the moment.’ 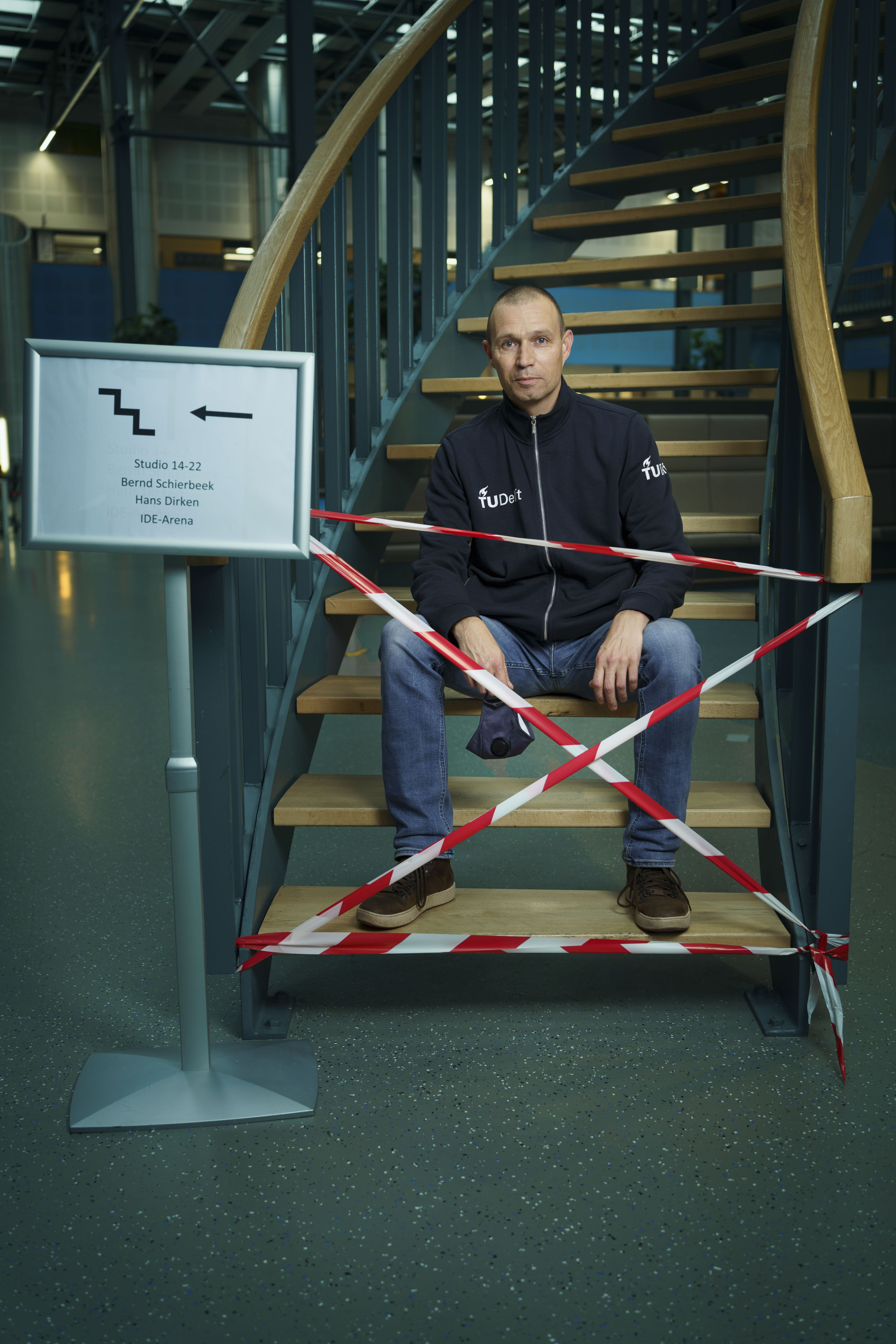 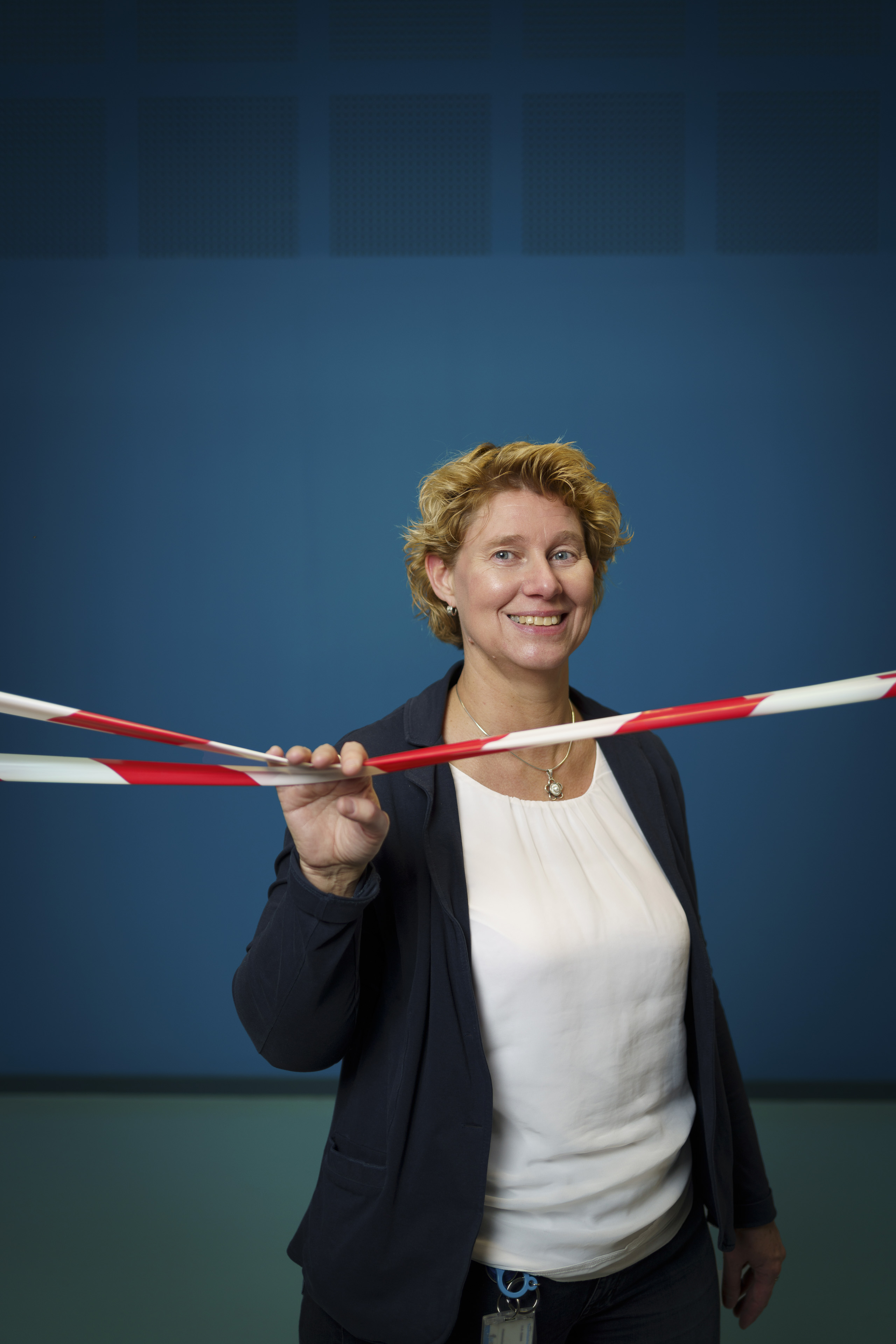 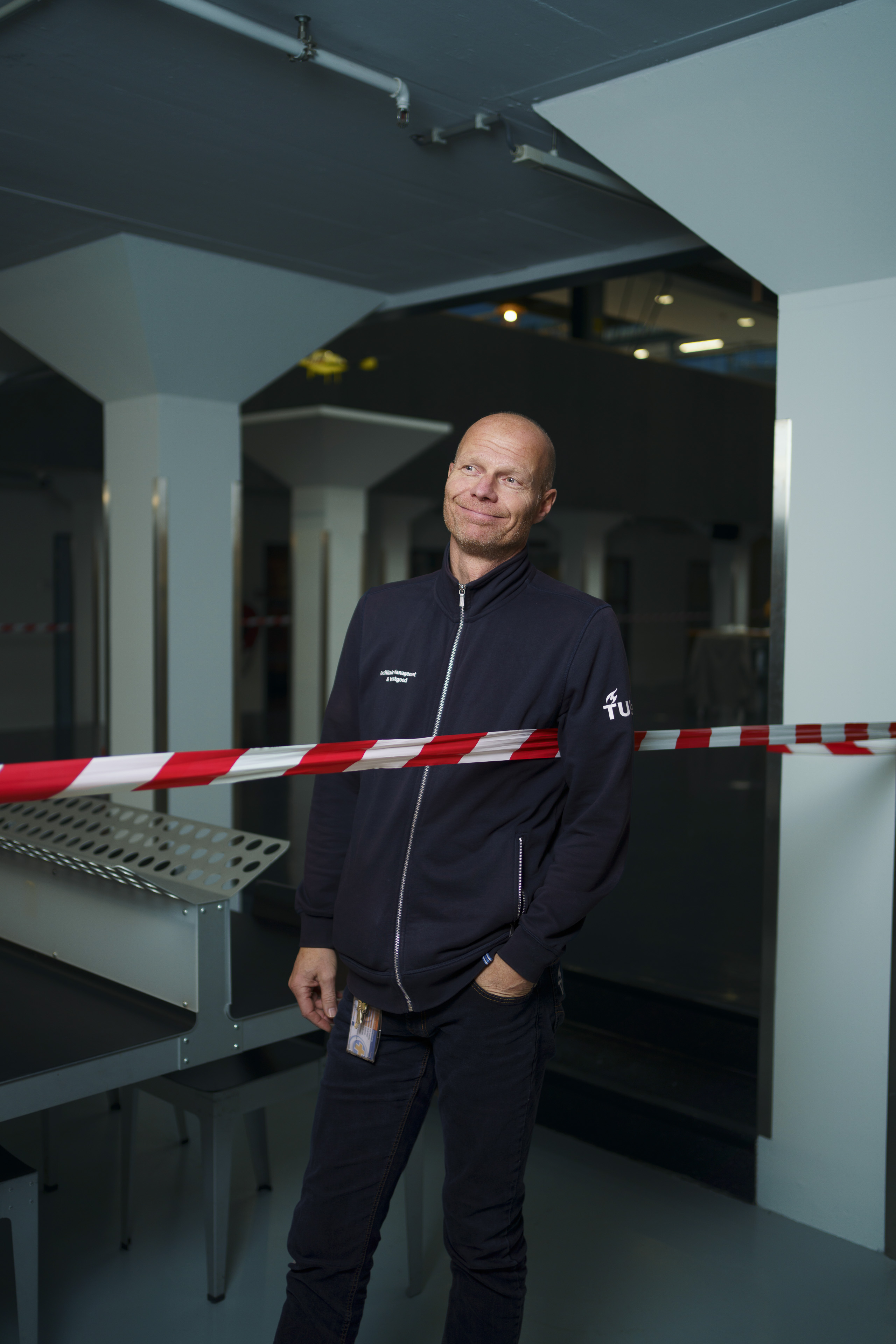 In response to all the changing circumstances and measures, FM has been juggling balls in the air for much of the year. Some colleagues are doing that from home. ‘Of course, most of our work is based on campus, which is why it was agreed that two FTEs could be on campus in each faculty’, explains Sneekes. The presence of FM staff is also important for the in-house emergency response (BHV) team. ‘We play an essential role in emergency response. In fact, it used to be compulsory for all FM staff. That makes sense, because we know the buildings like the back of our hands’, says Ensink. ‘We cover the whole building, so if there’s an incident, we can act immediately’, adds Sneekes. Currently, there’s a headcount every morning to make sure there are enough BHV staff present. ‘There needs to be adequate support for the number of people in the building’, explains Hellemons. If the numbers are too low, members of the fire service or external BHV staff can be deployed to ensure that the buildings can remain open.

I'm so proud of what we’ve achieved here

‘We don’t want people coming to campus every day if they’re not doing their regular work. We need to make do with the people available on the day. It’s a relatively fixed team, and thus far, we’ve always had enough BHV staff, touch wood.’ However, other rules apply for the laboratories. ‘Depending on the processes running at the time, there may need to be specially qualified people on hand’, says Hellemons. That means people trained to use breathing equipment. ‘For example, if experiments are being conducted that could release carbon monoxide and there are no specially qualified people present, we let the departmental directors know. We flag up the issue and they decide.’ No one wants to have to close buildings or labs, but it's safety first.

Although there is plenty of work to do in FM, there’s clearly something missing: ‘It’s no fun working like this. You miss the hustle and bustle in the building and contacts with colleagues in the team’, says Ensink. ‘That weird, icy silence of those first few months is something I’ve never experienced in twenty years at TU Delft, not even at Christmas. You could hear a pin drop.’ Hellemons: ‘At times it feels like you’re working in a world of fiction: you have to install furniture for new staff members who aren’t physically present, but you need to be prepared for when they’re eventually allowed to come. You also have no immediate result for the work you do, and only hear much later if people are satisfied, or want further adjustments.’ 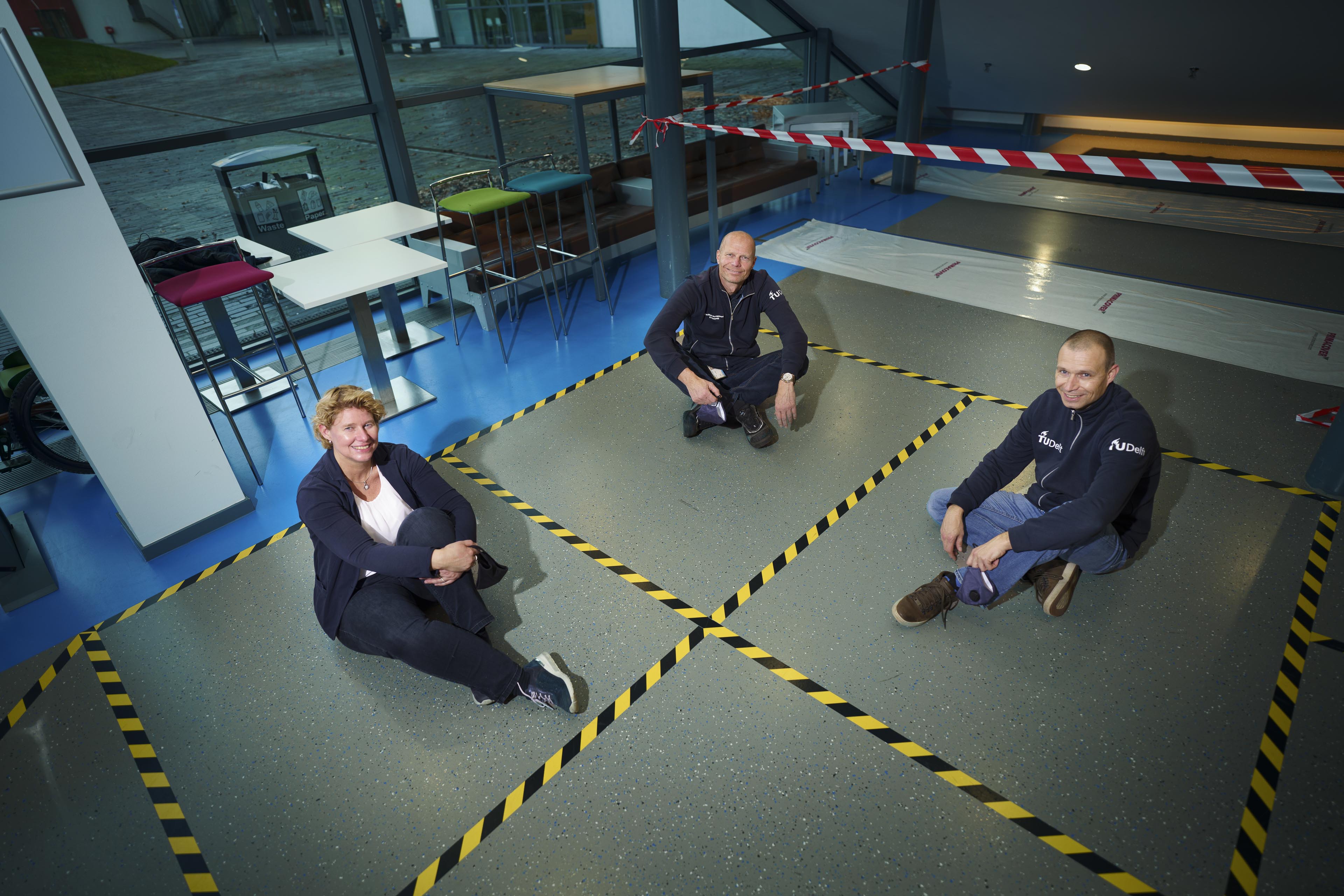 Despite everything, optimism has the upper hand. ‘Coronavirus has brought the service team closer to the faculty. We were always part of it, but we now also get that sense from them as well. They’ve seen that what we do behind the screens has an effect. That they can park their bikes, that access has been arranged, that sanitisers are available. They also understand that we help the faculty to find solutions’, says Ensink. Sneekes agrees: ‘What we do is now much clearer, we’ve moved from the background into the foreground and people ask for our opinion much more.’ Ensink: ‘I’m proud of the team we have and how the three of us have acted in this crisis. Of course, the whole team is behind us! I'm so proud of what we’ve achieved here.’