Hydrogen is a sustainable alternative to kerosene-powered air travel because there are no CO₂ emissions. But hydrogen is also associated with challenges and risks, such as the danger of explosion. TU Delft scientist Dr. Ivan Langella aims to use mathematical models, high-fidelity computational simulations and experiments to develop a zero-emission hydrogen-powered engine that will enable aircraft to fly safely and efficiently.

Although the coronavirus has currently left many aircraft grounded, aviation is developing at a rapid pace behind the scenes. Sustainability is one of the main reasons why this is happening. Currently, aviation accounts for some three percent of global CO₂ emissions, but with lack of alternative sources this figure could go up to a quarter of the global emissions in the next 3 decades. And this is without including dangerous emissions such as nitric oxides. There is thus much scope for progress within the aviation industry when it comes to sustainability, says Ivan Langella, Assistant Professor in Sustainable Aircraft Propulsion. “Existing kerosene-powered aircraft engines cause high levels of CO₂ emissions and pollution. If we want to combat further climate change, aviation will need to become much cleaner, especially if you take into account the ever-increasing number of flight movements. One of the solutions that could make a difference is the use of hydrogen. This is because hydrogen combustion does not release any carbon.” 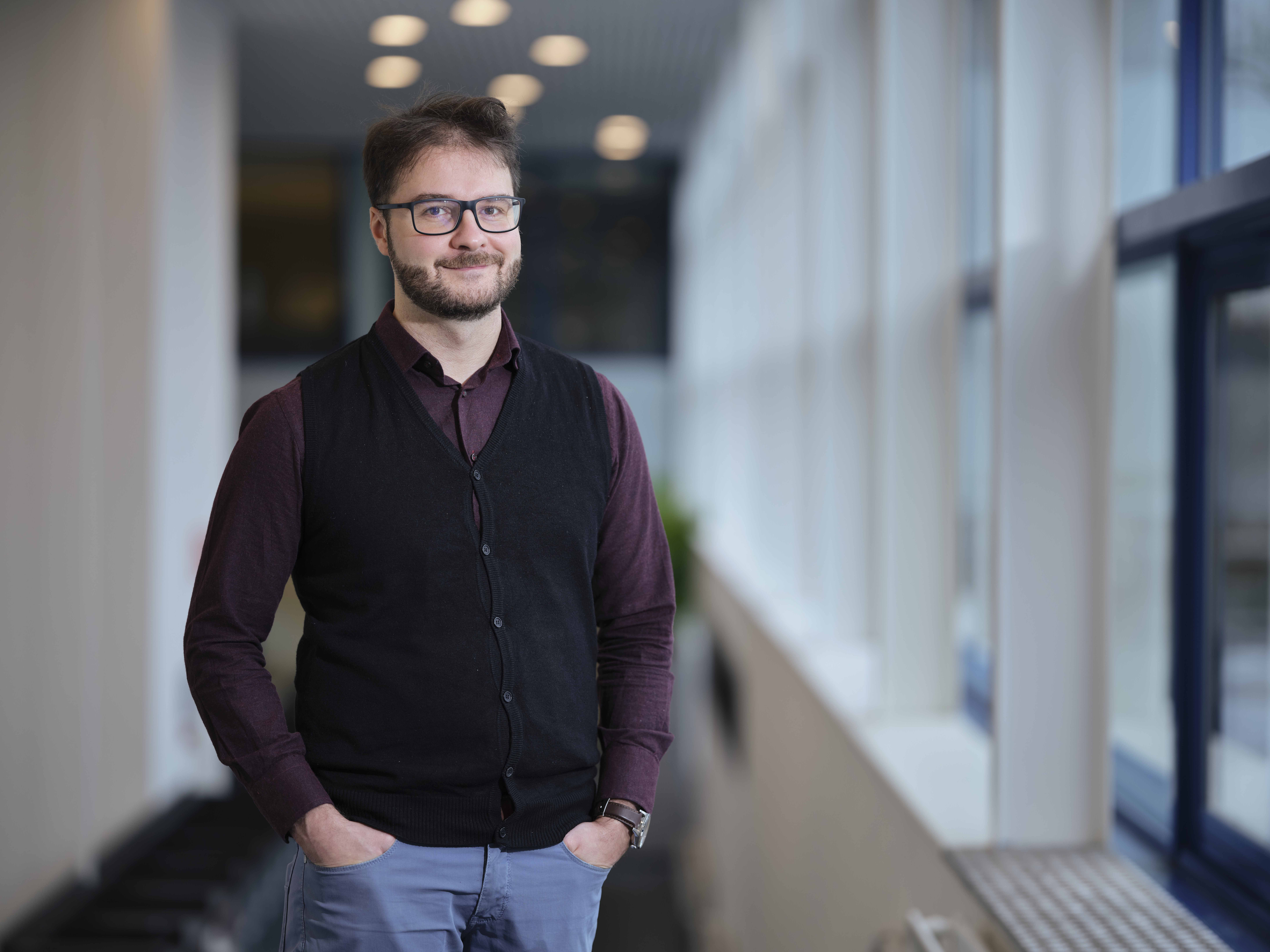 Designing the hydrogen engine as efficiently as possible in order to integrate it into an aircraft is another challenge.

Planning a city with conflicting values? No problem!

Cleaner fuel, but there are risks

As an aerospace engineer specialised in fluid dynamics, Langella is playing an important role in the development of hydrogen engines for aircraft. “Hydrogen-powered cars have appeared in the market, but there’s not yet a hydrogen engine for aircraft that works effectively. Much more research is needed on what is feasible for aviation and how engines of this kind can be efficiently applied on aircraft, especially large ones. One of the key challenges is the instability of the flame at some engine conditions. This can lead to the flame propagating towards the tank, a phenomenon known as flame flashback, and consequently a significant risk of explosion. So, we need to improve the engines reliability.

Despite the fact that a kilo of hydrogen is three times more energetic than a kilo of kerosene, hydrogen requires much larger tanks, even in liquid form. This means hydrogen-powered airplanes would be larger than kerosene-powered ones. The key will be to develop the hydrogen engine and storage tank without compromising on the weight and the aerodynamic efficiency of the aircraft, as this would mean more energy needed and thus more fuel consumption. This implies we may see quite differently shaped airplanes in the sky in the future than we are used to.

A gas turbine engine is made up of several important components, explains Langella. “We can broadly summarise these in a compressor that compresses and pre-heats the air from outside, the turbine that drives the compressor and the combustion chamber in which fuel and air are converted into energy. My research focuses primarily on the latter. I’m fascinated by how fluids interact and can be exploited to deliver energy. These processes are especially complex in aircraft combustion engines and involve a lot of physics and mathematics. But that’s why I find it so interesting. I’ve been obsessed by aircraft from an early age. On a fairground roundabout, I used to love sitting in the aeroplane, a passion I have nurtured in the adult age by taking flight courses for small airplanes. I’m absolutely delighted that all of these aspects and interests come together as part of my job.” 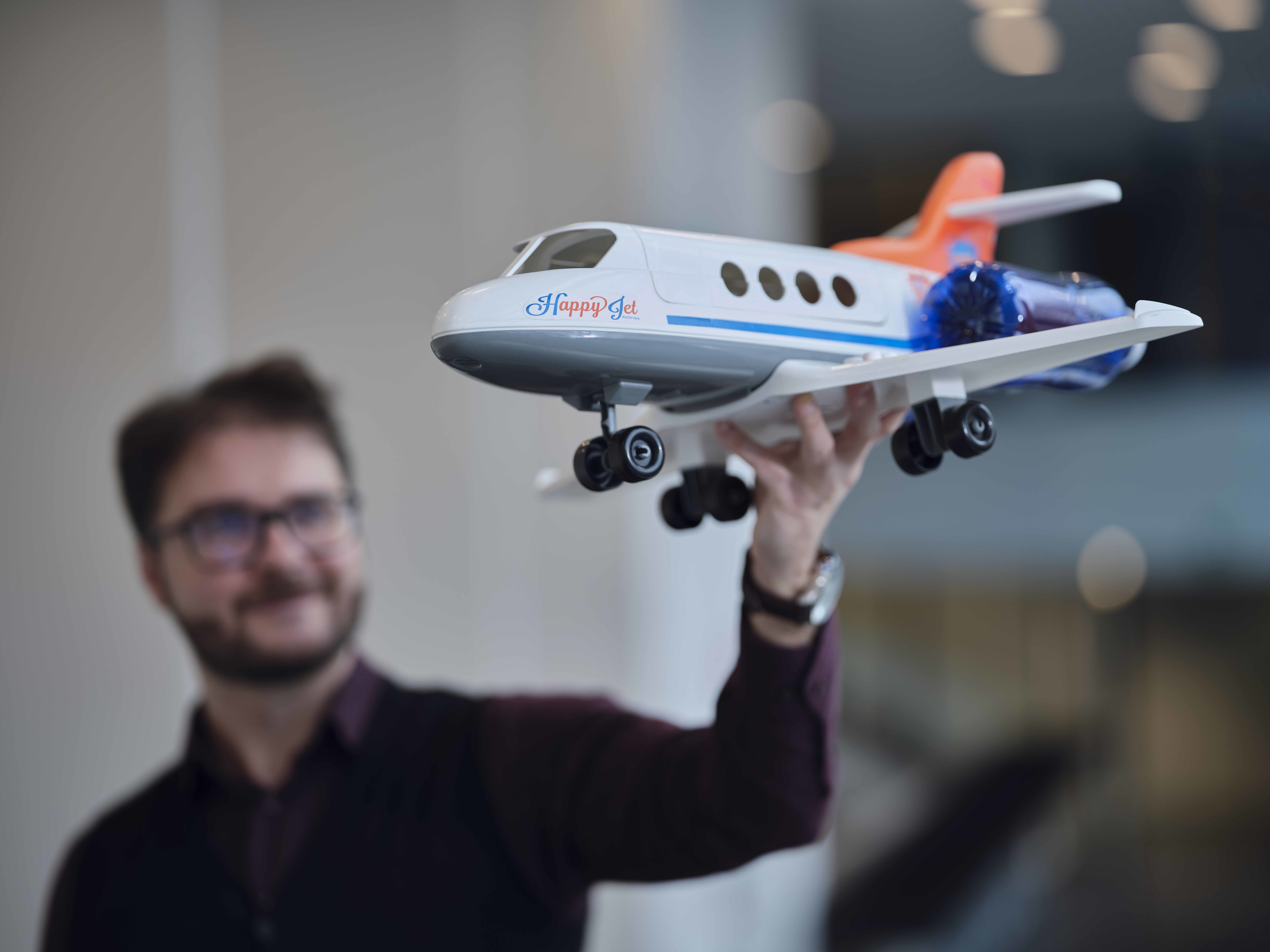 Plenty of expertise and partners

Langella gained his Master’s in Aerospace Engineering in Italy, where he was born. He then completed a PhD in Mechanical Engineering and held a post-doc fellowship in Cambridge. Next he was selected for the UK Excellence 100 scheme and worked as Lecturer in Thermofluids Science and Engineering at Loughborough University. He joined TU Delft as assistant professor last May. “TU Delft is one of the world’s leading universities in the field of aerospace engineering. There is a lot of knowledge here and the university offers extensive opportunities for experiments, simulations and data processing using powerful computers and top laboratories. The Netherlands is also at the forefront in the development of hydrogen technology. Not only industry, but also the government is investing heavily in clean-energy research. I’m able to do a lot of work with aircraft manufacturer Airbus and KLM here, whose long term priorities are still oriented for zero-emission flights despite the current suffering due to the coronavirus.”

With his research group in Delft, Langella is working on the development of a hydrogen engine in various ways. “One thing we’re investigating is how to stabilise the flame in the combustion chamber. The combustion of hydrogen generates mainly water vapour but also nitrogen oxides (NOx). You need to minimise these emissions as far as possible, because NOx are damaging in high concentrations. A relatively new technology – known as lean-burn technology – can allow this but often results in an unstable flame as well. That’s why we’re aiming to strike the right balance. I’m working on mathematical models and very powerful numerical computations in order to investigate the behaviour in the engine. Based on that, we can make assumptions and predictions that we then test in experiments with a prototype. If an assumption proves correct, we scale up the experiment. We’ll continue like this until we have a stable and nearly 100% clean flame. It’s very much a step-by-step process.”

Impact on the environment, society and knowledge

Langella is enthusiastic about the idea that his research is contributing to the development of cleaner technology. “It does not only matter for the environment, but also for society as a whole. The quality of air and nature is very much associated with the quality of human life. That means the research has an important social value. Another interesting factor is that this technology also has the potential for use in power plants, addressing the world’s increasing energy demand in a sustainable and clean way. The physical aspects underlying the technology are similar, although application in aircraft engines is slightly more complicated – as you cannot increase weight in aircraft as easily as you can in power plants. Thanks to strong investments in hydrogen research, the Netherlands and Delft University of Technology are positioning themselves a step ahead to affirm their role of global leaders in both hydrogen technology and clean aviation”. 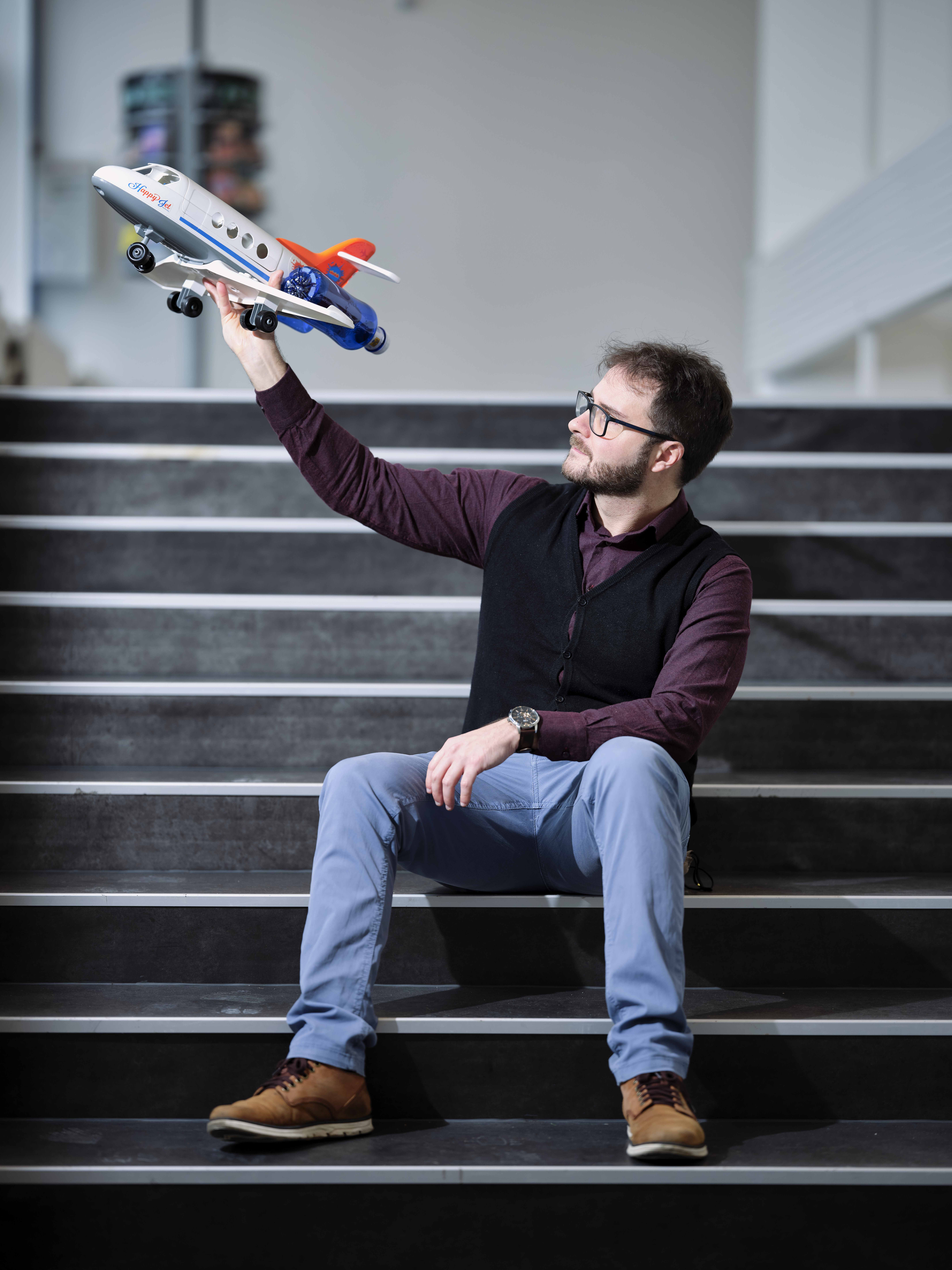 What the hydrogen engine aircraft will ultimately look like is still difficult to say, according to Langella. “Several solutions are possible. We’re certainly not the only researchers working on this. And in Delft we’re also focusing on various subjects, including an engine that runs on a mixture of hydrogen and kerosene. Obviously, it’s not completely emission-free, but will still contribute to reducing an aircraft’s carbon footprint. That would be a great step forward in itself. An airplane mounting a hybrid engine could also be developed more quickly, potentially within five to ten years. Using an engine that runs completely on hydrogen calls for major adaptations. Aircraft will need to be equipped with different fuel tanks and engines, and fuel transport will have to be arranged differently at airfields.”

Another important area of focus is the way in which hydrogen is produced, concludes Langella. “One method for producing hydrogen is from water via electrolysis. But that process itself also requires energy. If you use fossil sources for that, you’re still not really flying sustainably. Designing the hydrogen engine as efficiently as possible in order to integrate it into an aircraft is another challenge. It’s highly likely that hydrogen will prove to be a slightly more expensive fuel than kerosene, at least initially. But, in view of the advantages it delivers for people and the environment, that’s something we’ll just have to accept.”

We may see quite differently shaped airplanes in the sky in the future than we are used to.

Innovation needs a place to grow

Planning a city with conflicting values? No problem!

'It’s the practical choices you make that shape your moral values, not the other way round'

Innovation needs a place to grow