Starting a PhD on the first day of the Covid-19 lockdown was a bit challenging for Bieke von den Hoff. But the lockdown also gave her an unexpected and unique opportunity. As part of a trial programme at Schiphol Airport, she was asked to measure noise levels of a sustainable aircraft towing vehicle called the TaxiBot.

Finding your way through uncertainty

After earning a bachelor’s degree in Aerospace Engineering and a master’s in Aircraft Noise and Climate Effects, Bieke von den Hoff decided that pursuing a PhD on the noise impact of sustainable alternatives in aviation was a good fit. But during a post-graduation holiday, she realised that her mid-March start date might be impacted by the Covid-19 situation. “It was a bit difficult during the first weeks,” she said. “I know most of the PhDs in my department, but it was a big step to really connect and let people know that I started.” Having Skype ‘coffee breaks’ with her colleagues helped her get to know them better and helped her understand how the first months of a PhD work.

At the end of April, Von den Hoff learned that her supervisor had been contacted by Schiphol Group about a unique project. The airport was testing the TaxiBot (Taxiing Robot) as part of an on-going feasibility study on sustainable taxiing. This semi-robotic hybrid electric towing vehicle enables aircraft to taxi without engines running, significantly reducing fuel consumption. The savings brought by the TaxiBot are estimated to be between 50% and 85% of the average fuel consumption normally associated with taxiing. In addition, environmental benefits may include a reduction in CO2 and NOx emissions, resulting in better air quality, as well as reduced noise pollution. 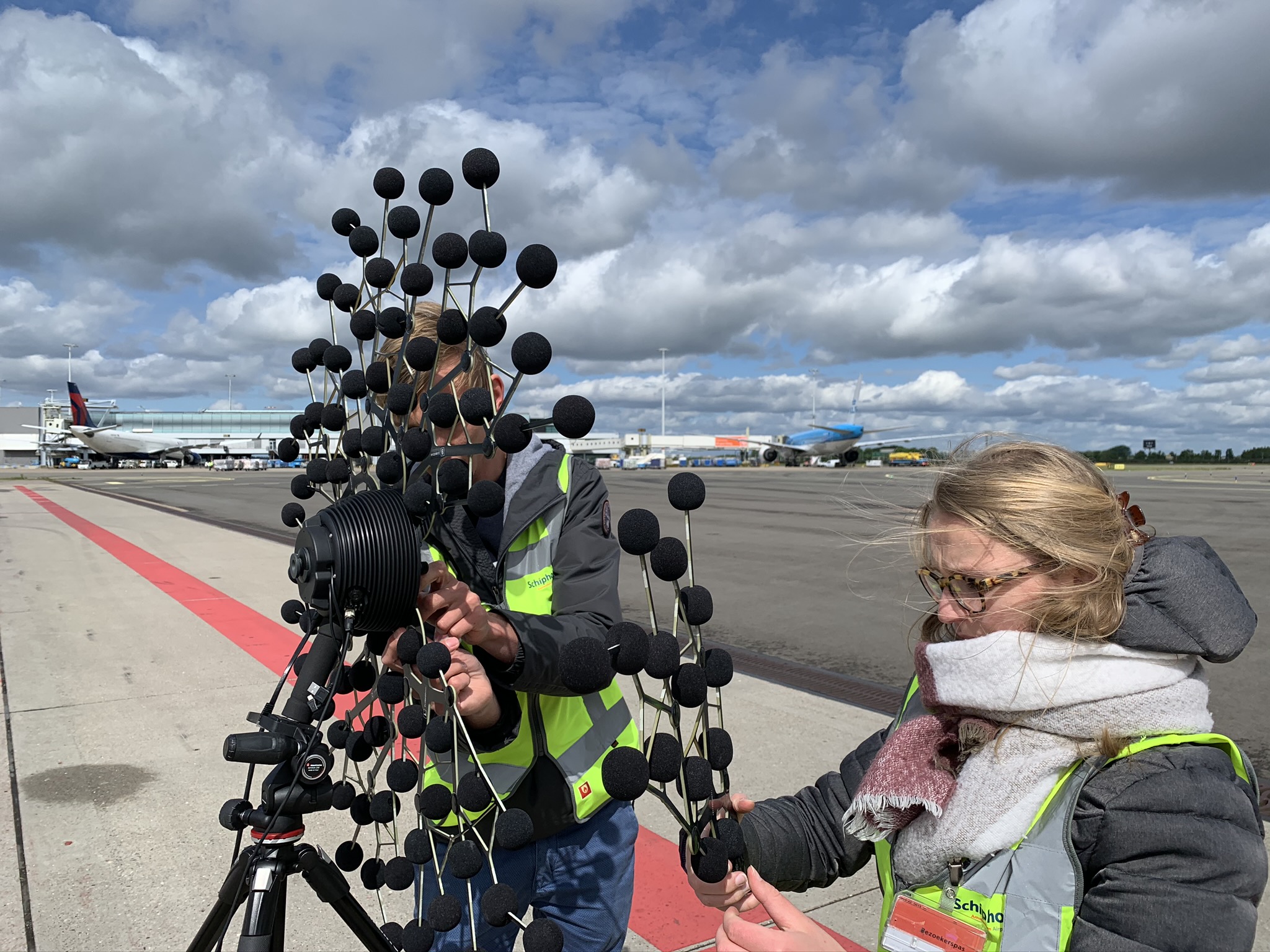 When it comes to measuring noise, Von den Hoff said it is typically difficult to separate background noise levels such as an engine start-up near the microphones from actual noise levels. With Covid-19 leaving the airport nearly empty it was the perfect opportunity to test what effect the noise associated with the TaxiBot would have on airport groundworkers. While Schiphol has been doing other tests to look at how the noise will propagate to areas nearby, Von den Hoff’s task was evaluating the noise levels on the ground itself. Not knowing when air traffic would start up again, she noted that her work would have to happen quickly: “Within three weeks we set up the whole plan and went there to do the project.”

Testing on the ground

For her master’s thesis, Von den Hoff studied flyover noise of aircraft at Schiphol. That project put her just outside of the airport, about 300 metres from the fences with microphones on the ground when the planes passed over. But the TaxiBot project required being inside the airport, on the platform where they park and board the aircraft. A specific zone was set up for the tests and they were not allowed to cross out of it for safety reasons. “We had to pass through a lot of security,” she said, “It’s really exciting to be out there. I think I will never have a chance to do something like that again after this project.”

Prior to the actual testing, discussions were held about what kind of tests the airport crew had to do that day and how Von den Hoff’s tests would fit in. In the end, the pilot and the aircraft, together with the TaxiBot, drove a few rounds past her position so she could measure the noise each time. “It was great for me because I just got new measurement equipment,” she said. “This was a perfect way to test it out and look at the possibilities.”

With a single microphone the noise levels can be measured, however this does not provide any information on the location of the sound source. Using two microphones, the direction of the source can be determined because the sound wave will arrive earlier on the microphone closest to the source. By using a microphone array with 112 microphones (see photo), a high-resolution source map can be made. 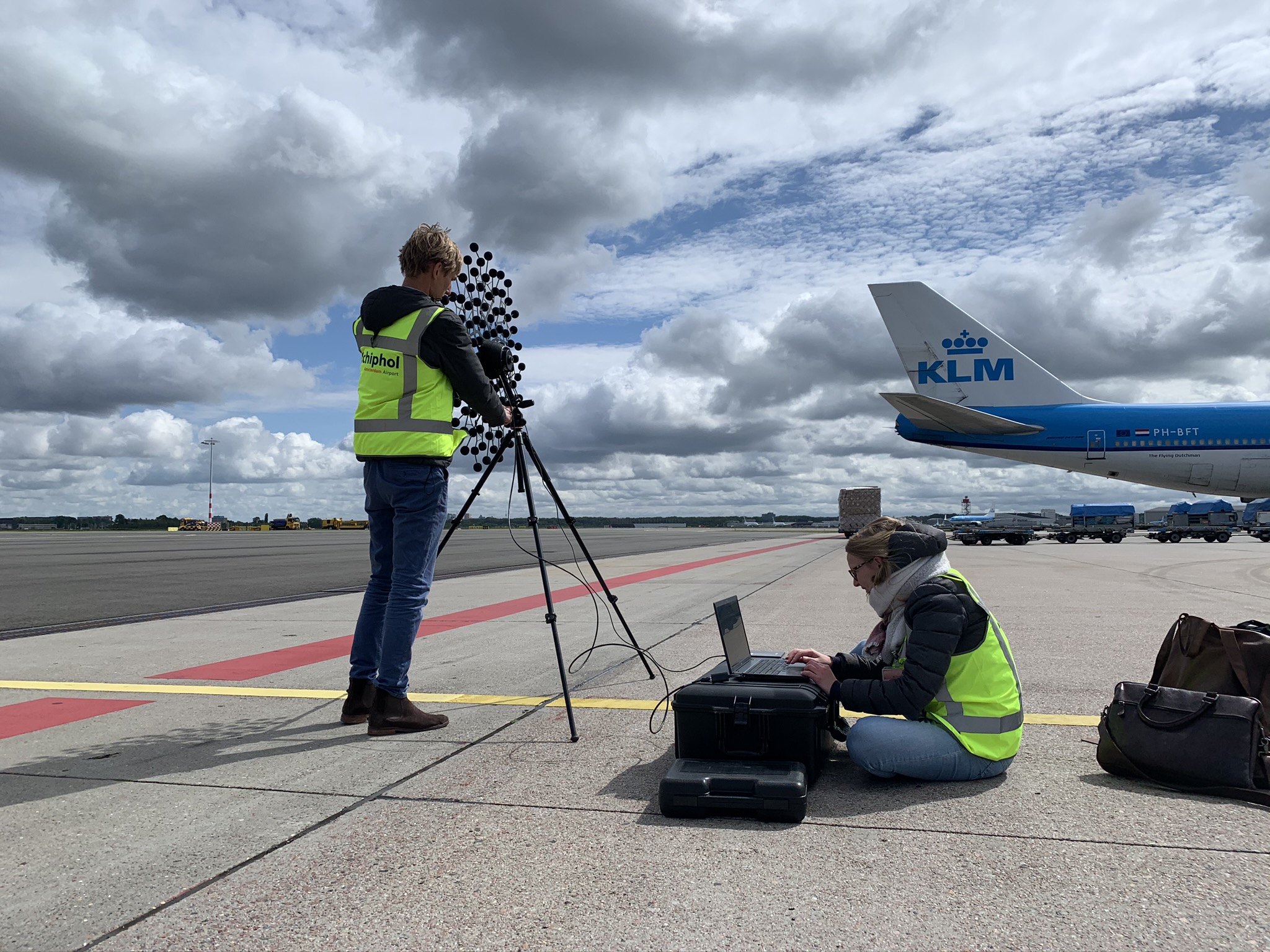 The first steps in a learning process

As for the measurement results, Von den Hoff is still looking into them. One issue at hand was windier than expected weather. “We checked the weather constantly but had a few wind gusts that were quite bad so I’m still checking how much that will influence our measurements,” she said. “But what we will do in any case is localise the sound sources so we can pinpoint what is generating what kind of noises and we will also assess the values of the noise levels for ground workers. Not only how loud it is, but also looking at how annoying it is for them.” Von den Hoff has been asked to conduct further noise assessments in the coming months. Schiphol’s TaxiBot trial is set to run until mid-August after which the study will conclude in Autumn 2020.

Still early in her PhD journey, Von den Hoff is preparing to submit her PhD agreement shortly. Although she knows the focus will be on the acoustic impact of sustainable aviation innovations, some things are still under consideration. “The noise impact of electric aircraft will probably be the main part of my PhD,” she said. “In the end, even if the TaxiBot project doesn’t completely fit in and won’t be included in the PhD, it was still really good research.”

Although aircraft have become significantly less noisy over the last decades, the growing amount of air traffic means that many people are still exposed to high noise levels. This can contribute to things like annoyance, sleep disturbance, speech interference, distraction and at extreme levels, noise can lead to health-related issues such as hearing loss. Therefore, assessing aircraft noise is relevant in the context of designing acceptable noise management policies and evaluating environmental impact.

When talking about sustainability in the aviation sector, Von den Hoff says that people mostly think of the climate impact as it affects the world on a larger scale. “I think that noise emissions are also very important for sustainable aviation growth, although not everyone realises that impact. We should not forget that a large part of why Schiphol is not allowed to grow is that it is not sustainable from a noise perspective. Although we definitely should focus on the climate aspect of sustainability, I think we should also recognise noise as an important part of sustainability.”

With a single microphone the noise levels can be measured, however this does not provide any information on the location of the sound source. Using two microphones, the direction of the source can be determined because the sound wave will arrive earlier on the microphone closest to the source. By using a microphone array with 112 microphones (see photo), a high-resolution source map can be made.

From CO2 to plastics and laptops

The landslide forecast coming to you from space