What kind of investments are needed in the Port of Rotterdam’s energy infrastructure to ensure a successful energy transition? A consortium of grid operators, government bodies, port companies and research organisations have joined forces to launch the GridMaster HIC (port industrial cluster) project. “GridMaster is a multi-model method that supports the exploration of robust investments, regret minimisation and various perspectives. Organisations can use it in their decision-making processes, thereby ensuring that the energy transition can take place in the best, most effective and most acceptable way possible,” says Igor Nikolic, a researcher at TU Delft.

Nikolic, associate professor of participatory multi-modelling, helped pioneer the methodology behind GridMaster’s multi-models: “We translated the potential transition paths of the energy systems for the next 30 years into this integrated multi-model. We also input available data, drawing on the plans of industry and grid operators. We can then use GridMaster to produce coherent calculations and analyses of thousands of future scenarios. Stress tests provide grid operators, government bodies and companies with valuable information on the type of investments that we will least regret in the coming decades.”

Energy infrastructure projects are very costly, progress is slow and, once you have actually built something, it will remain in use for a very long time. Nikolic: “Amsterdam’s main infrastructure still includes 70- to 100-year-old copper cables wrapped in tar paper. In London, some sections of the water supply system are still made from hollowed-out tree trunks. So everything you do and invest in today will have a long-term impact. The energy transition is also making it difficult to predict what kind of energy infrastructure the port will need in the future. Numerous unpredictable factors come into play, making it difficult to know which way things will be going. Each single decision could end up triggering or holding back all kinds of developments. This fundamental uncertainty is complicating the process of coming up with future-proof investment plans. Large infrastructure projects also tend to involve several stakeholders with different interests, so you have to take that into account as well."

Collaboration and sharing data and knowledge

In order to counteract this unpredictability and complexity, Nikolic is taking the Windmaster pilot project a step further. In this project, he worked alongside nine market parties from the Rotterdam port and industrial area to define a simplified multi-model for the future use of wind energy. “In 2019, we produced a proof of concept for Windmaster and demonstrated that the multi-model approach works. The key thing here is to involve the main stakeholders when designing a model like this. That is what participatory multi-modelling for transition support is all about: you work with people in an organised and structured way to create a whole network of families of models that are understandable and acceptable. It’s fantastic that those involved recognise the urgency of working together. They share available data, which improves the models, because in the simulation we can also assess the possible relationships between different infrastructures.”

GridMaster can be used to calculate thousands of future scenarios: What will the future supply and demand of energy look like? Which technologies will dominate the new energy infrastructure? To what extent will the various energy carriers, such as electricity, green gas, hydrogen and heat, form an integrated system? Will CO2 capture and storage play a role, and what will the energy mix be like in 2050? What decisions will multinationals make in terms of their location policy for new green factories, and will a sustainable Port of Rotterdam still be an interesting option for them? Will existing industries be converted, and if so, when exactly and based on what technology? Nikolic: “For example, choices made today might lead to inadequate infrastructure or unnecessary investments. We can use GridMaster to create adaptive, robust investment plans that are future-proof.”

No such thing as a perfect solution

There’s a twinkle in Nikolic’s eye when he talks about complexity, unpredictability and modelling. “Traditionally, the natural reflex of industry, energy giants and governments has been to keep uncertainty at bay: they come up with three options and choose one. But that’s not going to help in this situation. The energy infrastructure and energy transition is a huge, complex and unpredictable chess board, where every possible move – regardless of who makes it – will affect everyone. That’s why I am in favour of using participatory approaches to link multiple models, embracing thinking about uncertainty, exploring and analysing a wide range of future investment paths and thinking in terms of adaptive investments. Unfortunately, there is no such thing as a perfect solution - at best you can try to make decisions that you regret the least afterwards. Let me put it another way: you’ll become less blind, throwing many more different aspects into the equation in a holistic manner, such as investment logic, behaviour, gas-electricity interaction, distribution and industry. That’s the added value of a multi-model ecosystem.”

The question remains why a ‘multi-model nerd’ would take such an interest in sustainability. “As a society, we are facing a major environment and climate problem. It keeps me awake at night, because the planet is being destroyed and in a prosperous country like the Netherlands the urgency still hasn’t hit home. Sometimes I feel like shouting ‘Wake up and take action now to help the climate and the environment!’ from the rooftops. As a scientist, this social relevance is hugely important to me. I trained as a biochemical engineer, studying living things and processes. One of the courses I took, ‘Chemistry and Society’, introduced me to the whole debate on sustainability, and I sensed, even then, that things were going wrong. That’s why I chose to graduate from the Centre for Environmental Sciences in Leiden. Computers are a fun hobby, and I have always worked on modelling. Coincidentally, a former colleague asked me to collaborate on a project about industrial networks and their transformations. That was great fun, and I went on to introduce a new tool: agent-based modelling. This proved to be extremely effective for socio-technical systems, in which people, technology, organisations and processes all play a role. Through my connections with social scientists at our TPM faculty, I ended up working with Geertje Bekebrede, assistant professor of serious game design, to build the Infrarium. This is an energy grid game designed to allow people to physically and emotionally experience the urgency, coherence, interdependence and complexity of the energy transition.”

Applying it to the Dutch energy infrastructure

GridMaster’s unique simulation model provides the first insights into future-proof investments in energy infrastructure that will facilitate a robust energy transition in the port of Rotterdam. Nikolic: “This will minimise the potential risk of a future shortage or surplus of network capacity and clear the path to a climate-neutral Port of Rotterdam by 2050. And as far as I am concerned, we should be doing more than that. All GridMaster tools, models and results are available to the public. Because the integrated energy system is presented in a single network of models and simulations, it also offers many opportunities for research into investments in other parts of the energy system, such as the national infrastructure. That’s why, on behalf of the Top Sector Energy and the Netherlands Enterprise Agency (RVO), I am also involved in developing a national multi-model energy infrastructure for the whole of the Netherlands. That’s where we’re going to make real progress in sustainability.”

GridMaster is a collaboration between the Port of Rotterdam, SmartPort, Tennet, Gasunie, Stedin, Siemens Nederland, Quintel Intelligence, TNO, the Municipality of Rotterdam, the Province of Zuid-Holland and TU Delft.

This is a story of the Faculty of Technology, Policy and Management 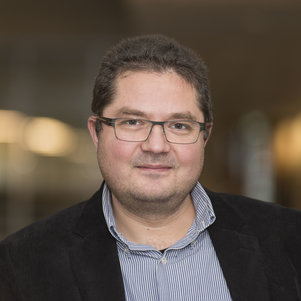