First aid for burn injuries is to cool the area for twenty minutes with lukewarm running water. Math can play an important role in choosing the subsequent, often more intensive, treatment aimed at reducing the probability of permanent damage or even disabilities. But these mathematical models for skin recovery must be fast. By applying neural networks, Marianne Schaaphok increased their speed by more than a million times.

Marianne Schaaphok likes to apply her talents to make the world a bit more beautiful. As of the second lockdown, she frequently cooks a little extra for neighbourhood people in need. She also considers her math skills to be a public good. ‘You can do beautiful things with math, and apply it in real life,’ she says. ‘That is why I decided to study Applied Mathematics at TU Delft, in which the focus is to find solutions to problems by applying mathematical models.’ Biology later turned out to interest her as well. ‘It wasn’t even part of my high school curriculum. But I was thrilled when my supervisor, Fred Vermolen, suggested a graduation project on the healing of burns.’ 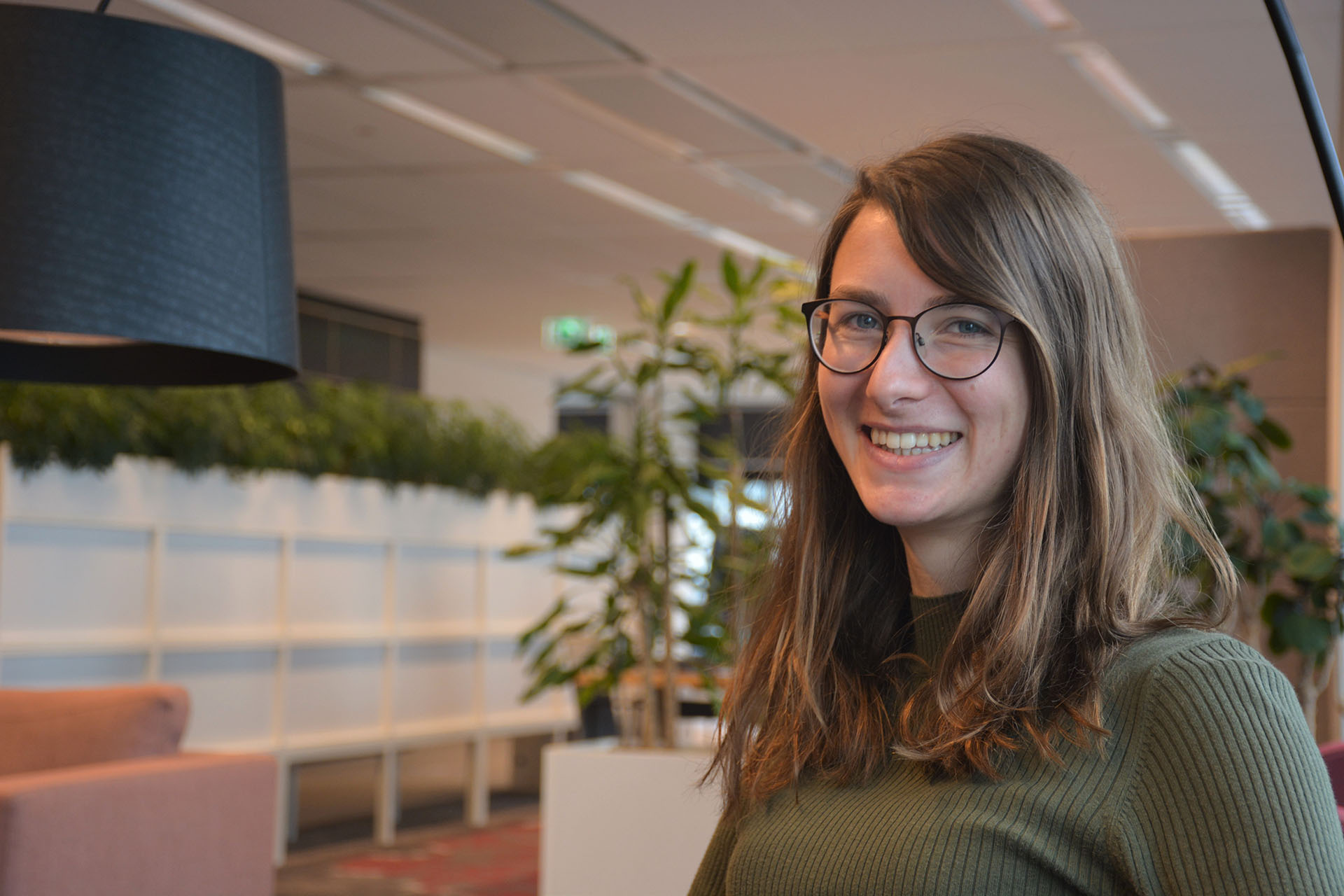 Speed is of the essence

Each year, more than 90.000 people in the Netherlands suffer from burn injuries, with about a thousand of them ending up in hospital. Improved understanding and better treatments have reduced the number of casualties. Skin contraction during recovery can, however, still lead to disabilities, such as a wrist joint that is permanently bent. ‘It is crucial to quickly apply proper treatment,’ says Fred Vermolen of Hasselt University and, prior to that, the department of Applied Mathematics at TU Delft. ‘Skin behaviour in the first four days after injury is a good indicator of subsequent recovery.’ His research groups in Delft and Hasselt are still the only ones in the world creating mathematical models of the recovery of burned skin. ‘Our models are demonstrably accurate. But they are very complex and computationally demanding because burned skin contracts and deforms during recovery. These models aren’t yet applied in burn care as a single calculation can take up to four hours.’

Marianne was tasked to try and find a much faster and nearly as accurate alternative for this computationally demanding method, using neural networks. ‘Neural networks are commonly known for their application in image and speech recognition,’ she says. ‘It is only recently that people became interested in using them to accelerate certain calculations. In this case, the slow, accurate model is used to create a large dataset. Most of these data serve to train the neural network. The remainder is used to validate the accuracy of the trained neural network.’ The input parameters for both models are, for example, the size of the wound, the concentrations of various types of cells in the skin, and the rates of cell division, cell death and cell diffusion. The (slow) mathematical model uses these for a step-by-step, day-by-day, calculation of the wound area and the strain energy in the surrounding tissue. When plotted in a graph, this model may show that the wound area is smallest – and strain energy largest – after a hundred days, after which it rebounds. The neural network is much faster and provides (an approximation of) both curves in a fraction of a second.

Now, we can simulate a clinical study in only two-hundredths of a second

The bachelor and master programmes had not covered neural networks in any depth, and her supervisor hadn’t spent a lot of time exploring this technology either. ‘There is a lot I had to figure out myself,’ she says. ‘And, when needed, I consulted with my fellow students or professors.’ Although the use of neural networks has increased dramatically in recent years, there is no simple rule that tells you which network architecture will provide best results for a certain problem. One of the most important challenges for Marianne therefore was to determine when her faster model would be good enough. ‘It took a lot of trial and error,’ she says. ‘For my graduation project, I mostly used the one-dimensional model for the prediction of skin contraction, in which the burn injury is a line instead of an area. This allowed me to create sufficient data relatively quickly. It turned out that many network designs yielded decent results.’ It was the proof-of-concept of neural network-based acceleration she had set out to provide. She then exceeded her original assignment by applying a similar approach to a two-dimensional skin recovery model. ‘The results were very promising, even though I could only generate limited data.’

A well-known shortcoming of neural networks is that it is often unclear how input values lead to a certain result. ‘That is bothersome, and especially so if you have a background in mathematics,’ she says. ‘I am used to being able to explain results or to prove that these are logical and correct.’ She therefore also applied a hybrid model that more closely resembles the mathematical model. In this hybrid model, the neural network acts as a surrogate for the most computationally expensive step in the mathematical model: it uses the shape of the wound as well as all cell densities and strain energies to predict these same values some time later. ‘This way, we keep the flexibility of the original mathematical model while benefitting from the increased speed of the neural network,’ Marianne says. ‘It was a much bigger challenge to come up with a good architecture of the neural network. Not only did it have to return much more information, it also had to handle both short-term and long-term effects. Otherwise, recovery as predicted by the neural network would diverge more and more from the slow model.’

Next to the proof-of-concept, a second goal of her project was to show how the neural network approach can help improve burn care. She therefore performed two case studies. In the first case study her aim was to determine which parameters have the biggest impact on recovery. Marianne: ‘We looked at the impact of patient age by simulating skin recovery for 500 random patients in each of four different age groups. When using the slow model, it took 14 hours to complete this study. Using the neural network, it only took two-hundredths of a second, making it more than a million times faster.’ The second case study was related to the fact that medical science is shifting more and more towards personalised medicine; how will this patient – with this age, skin type, etc. – best recover from a burn injury? Marianne: ‘We will not be able to exactly determine the skin composition at the cellular level, and thereby its elasticity. With our fast model we can simulate this uncertainty by varying the input parameters over a thousand simulations. This allows us to estimate the probability of certain outcomes, such as there being a 30% probability of skin contraction resulting in a disability after one year.’ 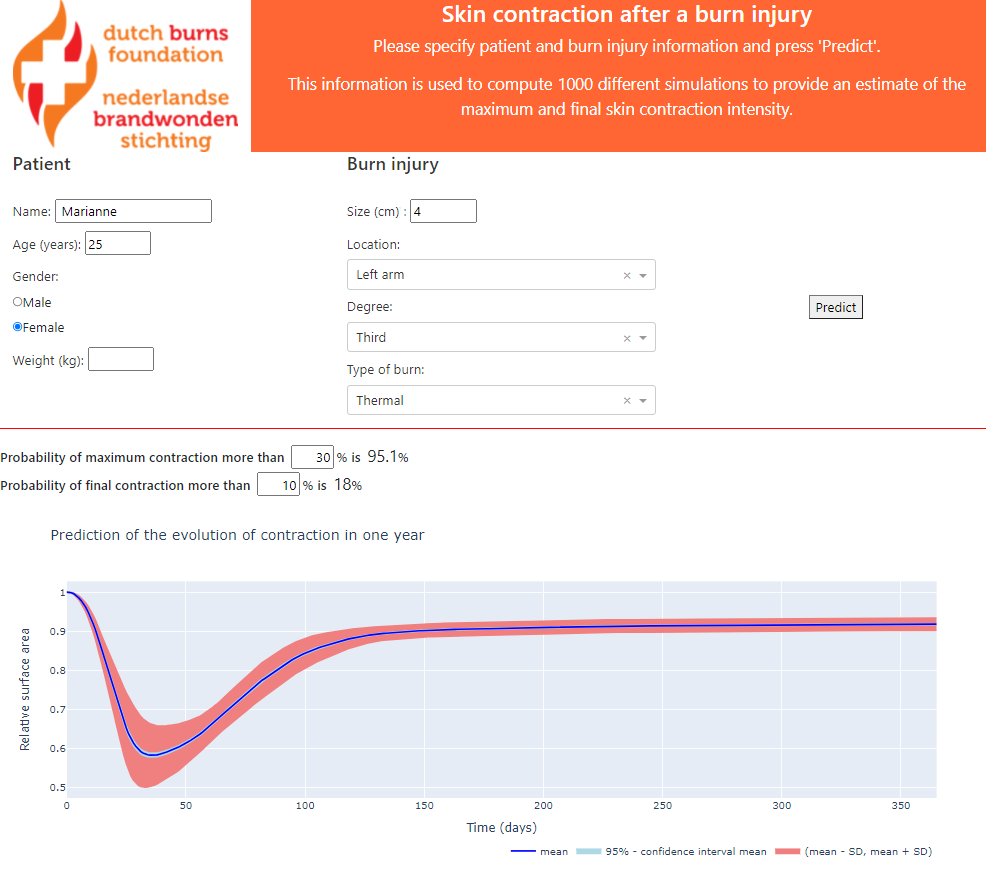 There is an app for that

This latter application has evolved into an online app that Marianne created together with Ginger Egberts, a PhD student in the same group. It estimates skin composition based on data that are easy to determine, such as the patient’s age, skin colour, and size and location of the burn injury. ‘The app still needs to be validated by medical professionals,’ Marianne says, ‘What are their needs? What information do they find relevant? How do we make it user friendly? In the end, we would like to have a physician take a smartphone picture of a burn injury and immediately provide feedback as to the long-term outcome with and without certain treatments. Does more intensive treatment, such as an autologous skin graft, indeed improve treatment outcome?’

Our app still needs to be validated by medical professionals

Marianne was somewhat surprised by the final mark for her thesis and by being nominated Best Graduate 2020-2021 of the faculty of EEMCS as ‘I did my work no different from how I always do it.’ Her supervisor thinks of her as a highly qualified scientist. Vermolen: ‘She certainly has all the qualifications needed to obtain a doctorate; in research, teaching, and the supervision of master students. And she has already contributed to a scientific paper based on her research.’ Looking for the ideal combination of research and societal impact, she enrolled as a trainee at the Netherlands Organisation for Applied Scientific Research (TNO). ‘To make sure society changes for the better,’ she says.

CO₂ is not a waste product but a raw material!