When Thijs de Jongh saw an app asking for volunteers to support vulnerable groups halfway through March, he jumped at the opportunity. But instead of filling out the form De Jongh and his fellow students decided to get cracking with the organisation of gewoonmensen.nl, a website for people who need help, during and after corona.

Bachelor graduate Thijs de Jongh had lots of plans to fill the time before going on to do a master’s degree. The applied maths and physics student was working at the off shore energy education centre DOB-Academy at the Oude Bibliotheek in Delft and was eying an internship as well. Then, on March 12, along came prime minister Rutte’s intelligent lockdown scuppering all his projects. It was around that time that Thijs received a whatsapp message saying: ‘Don’t fancy doing nothing when you can help? Fill out this form and register as a volunteer’. The message and the Google form led him to Naut Teeseling and Amber Nagelhout, the econometrics students from Amsterdam behind the call-out. ‘I sent them a message saying: ‘Naut, you don’t know me but I think what you are doing is wonderful and I would like to help organise it. Let’s turn this into something really worthwhile.’

Thijs immediately got on the phone with aviation and aerospace engineering student and pal Jasper Veen. Then the four of them got to work. ‘The same evening we were building a website around the form,’ Jasper says, ‘and then the whole thing took off. We had 15,000 registrations in the first three days. On the evening we went on Jinek it went up to 40,000, mainly students wanting to help. That had us scratching our head a bit.’ To bring together the volunteers and the target groups of the elderly and other vulnerable groups in need of help was a bit of a challenge, Jasper admits. ‘It’s so counter intuitive: we want to help people but how do we reach them? Many older people perhaps are hesitant to ask for help because they think others are more in need of it than they are. And the majority are not on the internet or social media.’

But that hurdle too was tackled with a show of promotional flair. Soon radio broadcasts, posters and other publicity campaigns were letting people know about gewoonmensen.nl. ‘Our information was  included in the brochures of Picnic, which has some 190,000 customers,’ Thijs says. ‘We also put up 11,000 posters around the country in places where people are still allowed to go, such as pharmacies and supermarkets.’ A hotline was opened for people who don’t use the internet. 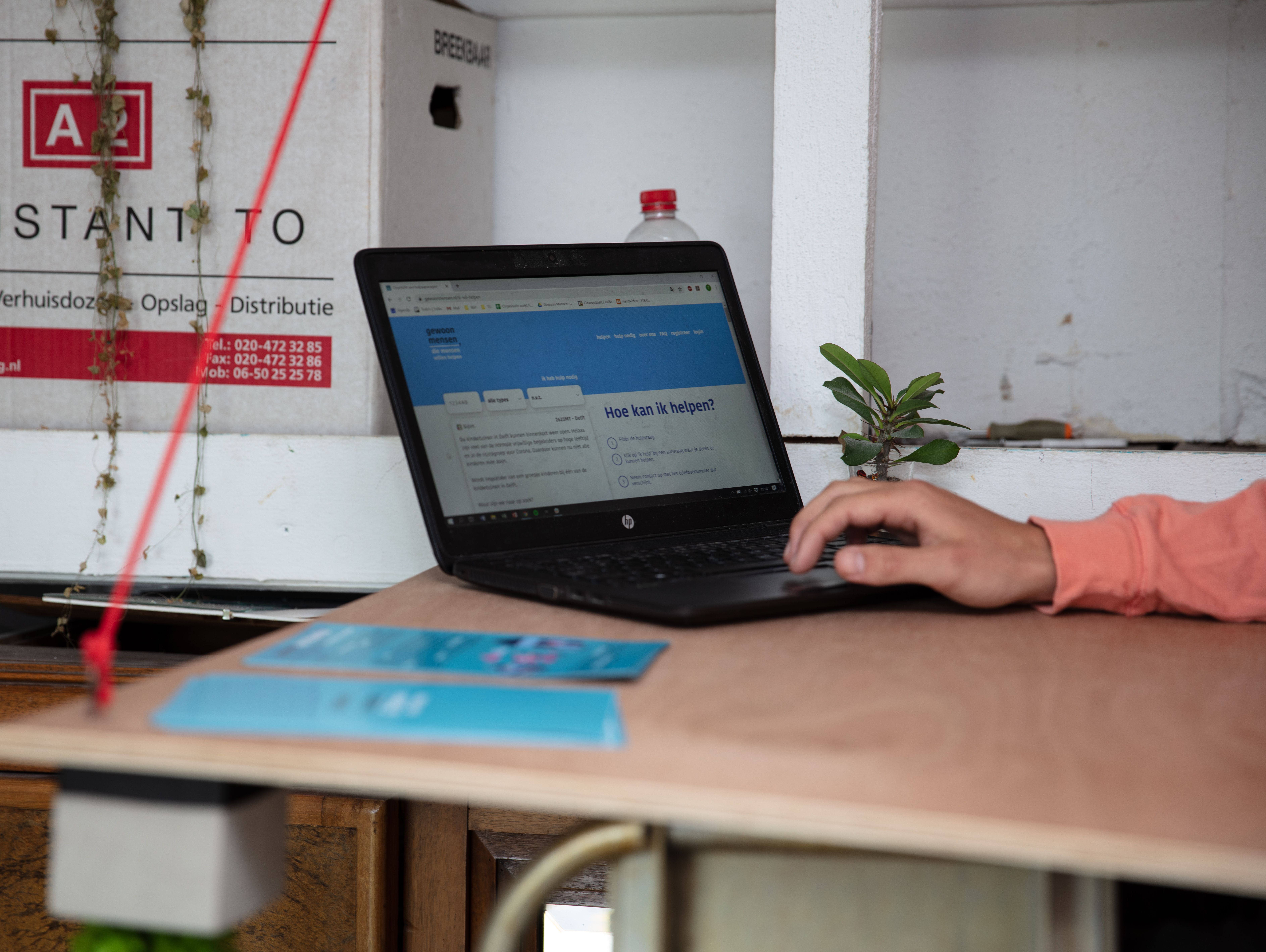 The platform is currently helping dozens of people a day. ‘The volunteers and the people who need help are being matched automatically. The most frequently asked for help involves grocery shopping, walking the dog, picking up medication, gardening and tutoring for kids.’ If no match can be found Thijs himself gets involved. ‘Some of the requests are really challenging. The AMC hospital rang, for instance, because they needed ten medical students by the next day to help on the corona ward.’

Apart from dealing with specific requests the platform also organises special campaigns. A fundraiser on the website meant over 43,000 elderly in the university cities were treated to an orange tompouce on liberation day. ‘It’s a fun way of putting a smile on people’s faces but also an opportunity to distribute cards with our contact data,’ Thijs points out. In April the students were asked by Ali B. to help carry out his flower project. ‘We only had two days’ notice. During that time we sorted out the logistics and found enough volunteers to deliver 1,200 bunches of flowers across the province of Zuid-Holland.’  On May 13 gewoonmensen.nl and Delft voor Elkaar got together and organised a campaign where 80 volunteers, mostly students from Delft visited 1,300 primary caregivers for a 1.5 metre distance chat. ‘We have good organisational skills that enable us to react quickly. We are very flexible and I think that is where our student volunteers excel.’

Even Delft mayor Marja van Bijsterveldt was roped in to help students of Delft student association DSC deliver meals to the city’s vulnerable elderly. ‘Frozen meals were delivered to 700 seniors. They were also given a tulip, and our card so they can contact us. The mayor was very enthusiastic,’ Thijs says. ‘Similar campaigns, complete with tulip, also took place in Leiden, Utrecht and Wageningen. It is special that Delft came up with this initiative. It means others don’t have to keep inventing the wheel.’

The current crisis also offers an opportunity to bring students and the city closer together, an initiative which formed part of a 2017 agreement between Delft local council and TU Delft. ‘In the past student associations in the city each developed their own projects and then went looking for a target group. Now they come to us and we can refer them to, for instance, a food bank that needs help. The wish to be socially involved has always been there but now that the platform has created a bigger support base that social involvement can be used to greater advantage,’ Thijs says. ‘We must now make sure that it remains a central hub which every student can access to do his or her bit.’

Thijs has plans to extend the help even further. ‘It starts with helping your neighbour. To lower the threshold between the supply of help and the demand for it was our initial aim and we have achieved that. But students can do – and are willing to do- so much more. Why not use the expertise we have gained to alleviate the pain of the economic crisis which is bound the come in the wake of the coronavirus crisis? Students are very eager to do something. Small and medium sized businesses will be needing their ability to think on their feet and their creativity in times to come. The platform provides an excellent port of call for them.’ 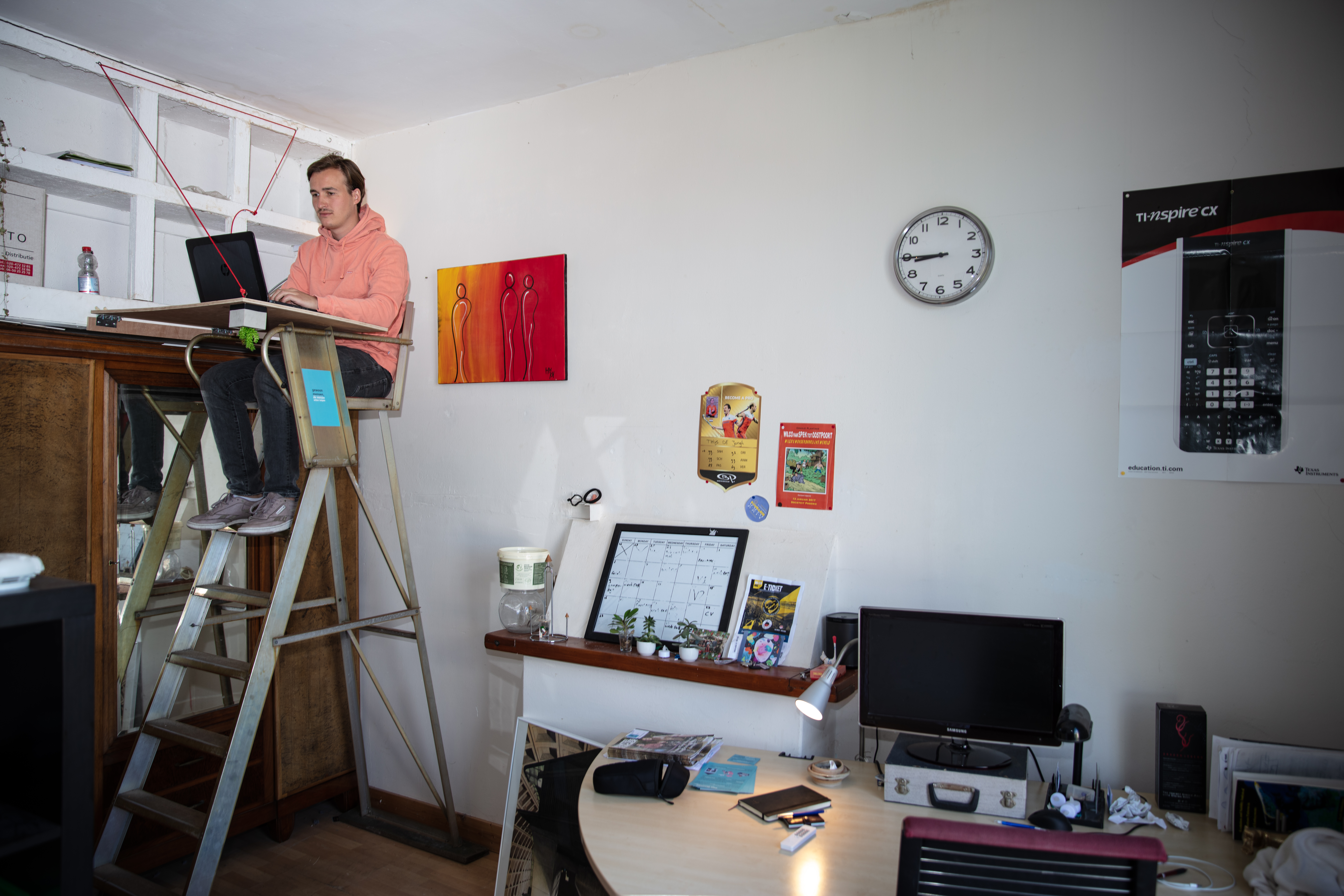 With all that has been happening Thijs has not had time to be bored for a single second. ‘I have not really noticed the lockdown slowdown because I was running so fast myself,’ he says. ‘I was planning on getting a lot of practical experience before starting my master and now I find myself doing an unpaid internship or startup. This is proving to be the period in my time at the university where I am learning the most.’ Thijs thinks all students should be more entrepreneurial in their thinking. ‘Why not set students an exam on social issues?’, he says. ‘How do we get 40,000 tompouces to 40,000 elderly people by next week? That would be a great assignment to give to bachelor students.’  It’s one that Thijs de Jongh and his colleagues have already earned full marks for. 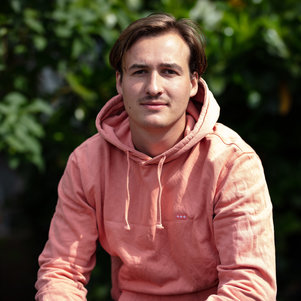