We know that the brain sends a muscle a message before it moves. But we are not entirely sure what happens next. Master’s degree student Rick Waasdorp has come up with a swift, non-invasive technique for looking at exactly this. It is perfect for further research into muscular dystrophy.

Administering an electrical charge to a muscle makes muscle fibres contract, which then causes movement by the body. Rick Waasdorp’s friends and house mates can confirm this. The young researcher has used them, and himself, as guinea-pigs many a time. “I wanted to know exactly how a muscle works, so I used an electric stimulator to see what happens when an electrical current activates a muscle”, he explains. “I once hit myself in the face in the process. All of the shocks were completely safe, but when experimenting on other people, I used smaller shocks to avoid accidents.”

The fact that this mechanical engineering student specialising in BioMechanical Design took an LUMC training course in nerve stimulation of the muscles before embarking on his experiments, only serves to illustrate his drive and passion. His high research ambitions are further evidence of this. Waasdorp wanted to combine two advanced biomedical techniques to map the precise progress of muscle contraction: ultrafast ultrasound (UUS) and high-density EMG (HD-EMG). 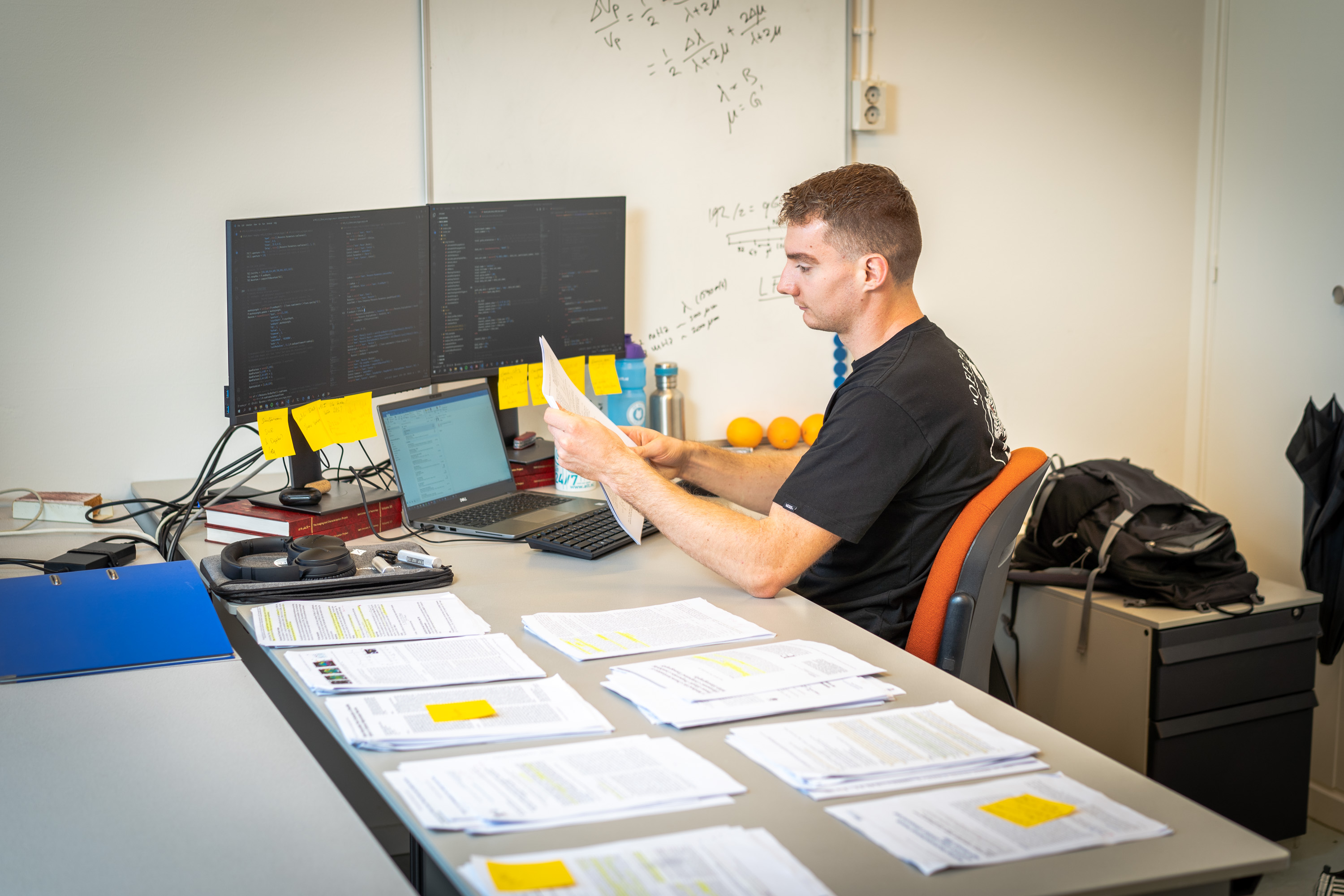 UUS is a ‘stepped-up’ version of conventional ultrasound. It makes images of organs and tissues by emitting and recapturing ultrasound waves. HD-EMG is a technique used to measure the electrical signal that is emitted when a muscle contracts. This can be done quite simply, by attaching a number of electrodes to the skin. “It’s an accurate way of monitoring the electrical impulse as it moves through the muscle, and the contraction that follows”, Waasdorp explains. “If you combine this with ultrasound, you can see what is happening in the muscle, right down to the level of milliseconds and micrometres. That’s what makes this method so special – existing measuring techniques are much slower.”

Why does it have to be so fast? Because electrical signals and the subsequent muscle contractions take place at an unimaginable speed. Waasdorp’s method can keep up with this pace because it easily produces 5,000 frames per second. The mass of frames generates an image in which thin white lines (muscle fibres) start to move at the precise moment that the muscle contracts. In this way, the technique can accurately demonstrate the condition of the muscle. 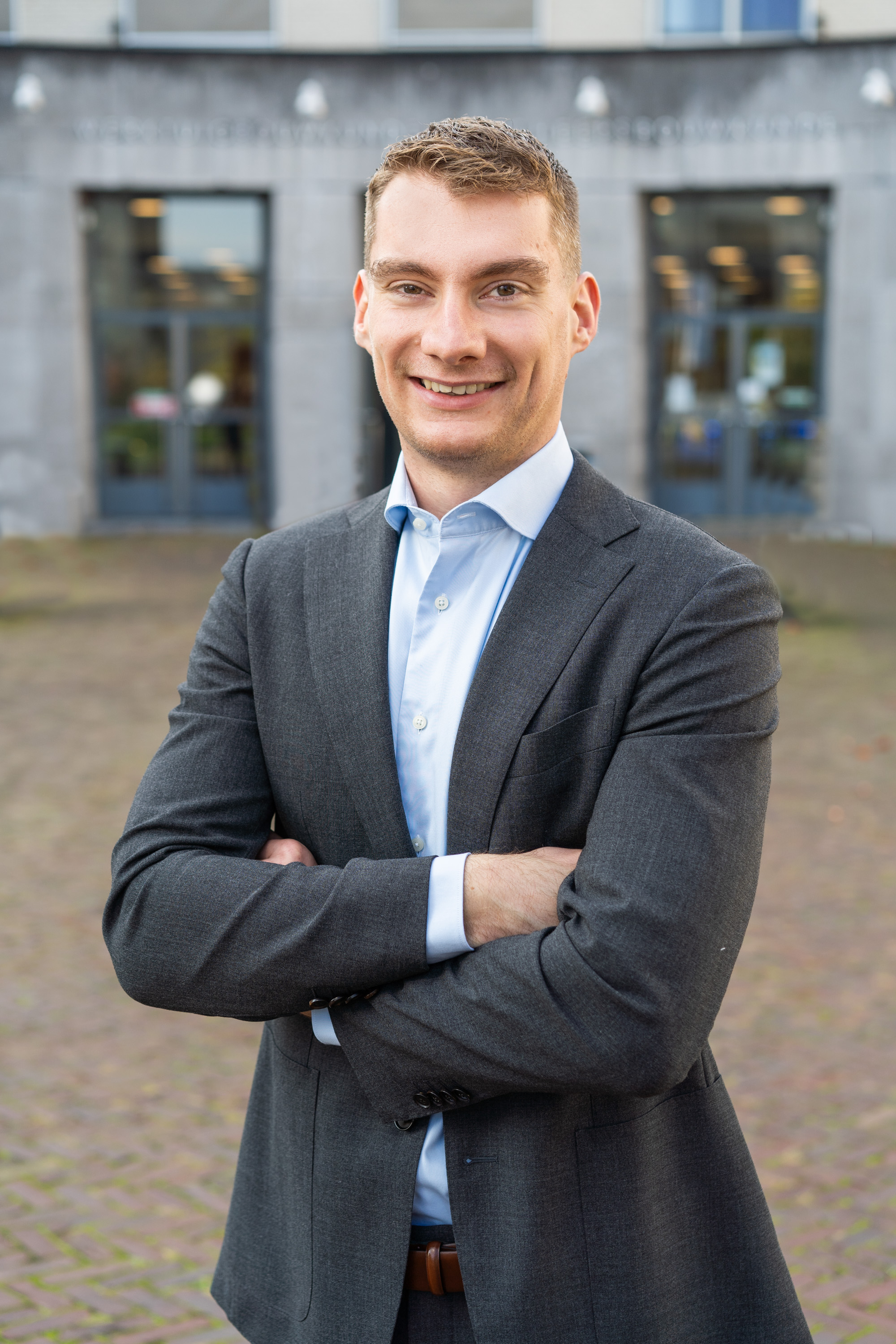 Although this is sensational, it is not the only reason that Waasdorp was given ten out of ten for his research – a unique achievement for each of his supervisors. He also wasted no time looking for a practical application for his discovery. His method was not entirely in keeping with the traditional order.

Right from the start, Waasdorp consulted with other parties to take his research to the next level. When developing his innovative measuring technique, for instance, he worked with the departments of Imaging Physics and BioMechanical Engineering in the Faculty of Applied Sciences and the Faculty of 3mE respectively. Once his ultrafast measuring technique was up-and-running, he turned to the Leiden University Medical Center (LUMC) to ask medical experts there how it could help them. “Why? Because the whole point of my research is that it can be put to practical use.” After presenting his results to experts in the fields of radiology, rehabilitation and neurology, it became clear that his research could be particularly beneficial when studying muscular dystrophy. Existing research methods have proved inadequate for people with muscular dystrophy.

Duchenne muscular dystrophy is a disease that weakens the muscles to the extent that many patients are confined to a wheelchair by the end of their teens. The respiratory muscles and the heart muscles also weaken as the disease progresses, and so average life expectancy is between 30 and 35 years of age. The muscles are weakened because the protein dystrophin is lacking in the muscle. The muscle tissue weakens as muscle fibres stop functioning. The muscle fibres that no longer work are replaced with fat. As a result, power is transmitted less efficiently within the muscle.

An MRI scan can show the characteristic fattening of muscle tissue, but does not indicate the extent to which the rest of the muscle has been affected. This can only be determined by testing muscle strength. In current tests, patients are asked to demonstrate their maximum muscle strength. However, this in itself can cause more damage to the muscles. “So the test aggravates the patient’s symptoms”, Waasdorp explains. “We want to change this.”

Without the need for injections or other potentially damaging interventions, the combination of HD-EMG and UUS visualises the electrical charge of the muscle fibres and the contraction. And this is at the heart of the problem in patients with muscular dystrophy: converting a nerve signal into muscular strength. It can also provide new insight into the progression of the disease. 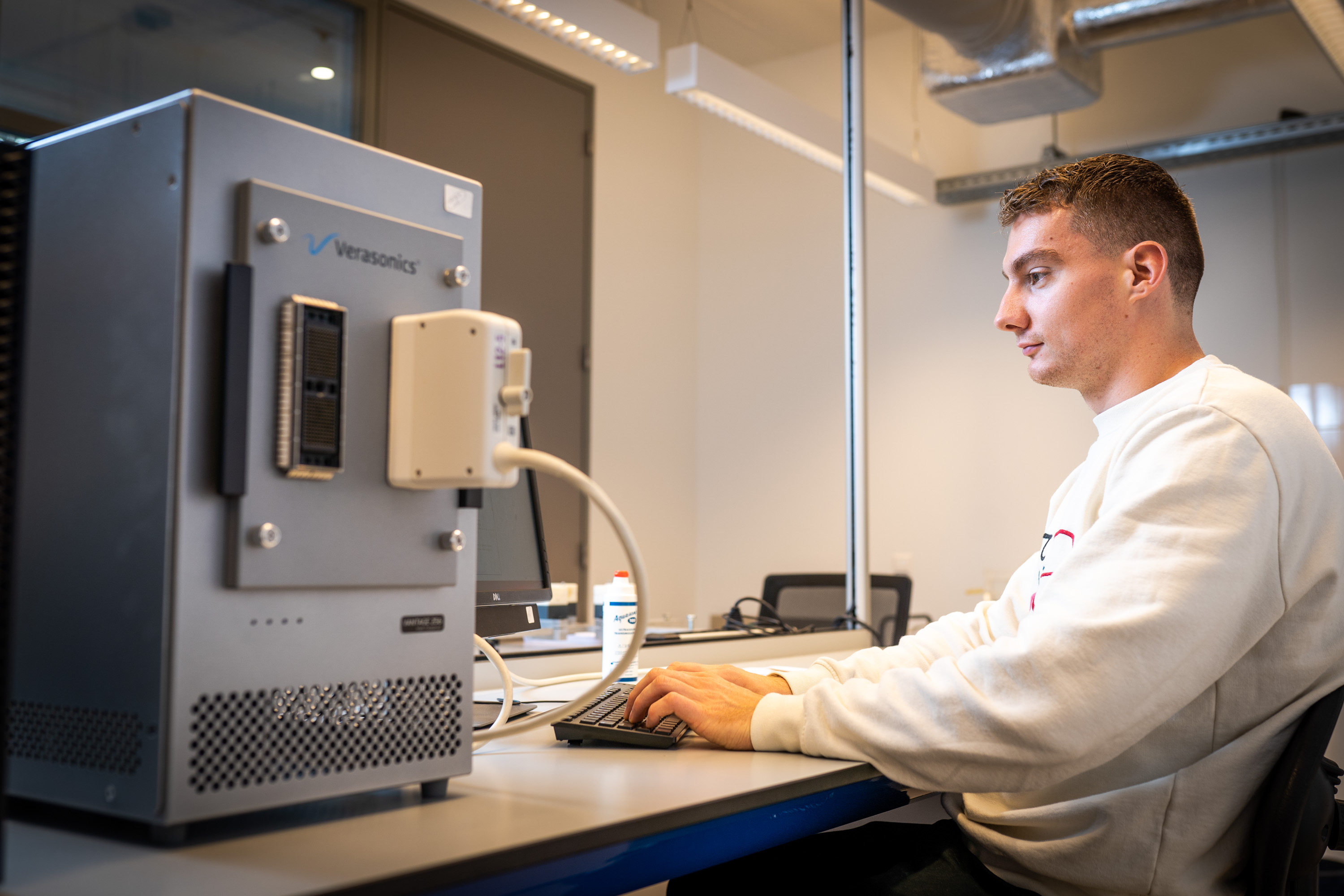 So Waasdorp’s fervent wish to carry out research that makes a difference has been fulfilled. The project that started 18 months ago as a piece of fundamental research is very nearly ready for clinical trials on patients. At the end of last year, he gave a podium presentation at the IEEE International Ultrasonics Symposium in Glasgow. A publication in a scientific journal is imminent.

His supervisors, Winfred Mugge and Alfred Schouten (BioMechanical Engineering) and Verya Daeichin (Imaging Physics), are ecstatic about the professional way in which their pupil combined different fields and managed to assimilate the knowledge he gained. “Rick was the only person in the project who could conduct high-level discussions with the experts concerned in every field”, says Mugge. “The enormous dedication, effort and creativity that led to his achievements have baffled and amazed his supervisors.”

Waasdorp himself can’t see what all the fuss is about. “I might not be a typical student, but to me, it’s only logical to ask doctors in the know how I can help them as an engineer.”

It’s all connected with an intrinsic yearning for perfection, he thinks. “When I study something, I have to do it well, preferably to perfection. That’s why I start by asking the experts how everything works. That’s the quickest way to becoming an expert yourself.”

You have to be willing and courageous enough to do it. This may not be true of all Master’s degree students, but in Waasdorp’s experience, the experts were delighted every time he came to them with complex questions.

The ‘just scraped through’ mentality isn’t on his radar. He even changed his research question half-way through his research. Focusing on the first milliseconds of muscle movement turned out to be even more exciting than analysing muscle contraction over a longer time scale. This turnaround in his research cost him three months of additional reading time.

So is Waasdorp a typical egghead? Far from it. This born-and-bred Heemsteder is a fanatical cyclist and skater, who enjoys going for a beer with his friends. He’s also someone who is happy to shut himself away for a few months to finish his research if need be.

Waasdorp’s successful research has already served him well (he’s still only 25). In September, he embarked on an equally ambitious PhD research project. It isn’t about dystrophy this time, but it does revolve around highly refined measuring techniques. He will spend the next few years using ultrasound technology to try to map brain activity, obviously once again at an unprecedented resolution. “I like working on relevant issues, and this is definitely a relevant issue. It could be an amazing step forward for the field of neuroscience. I can’t wait!” 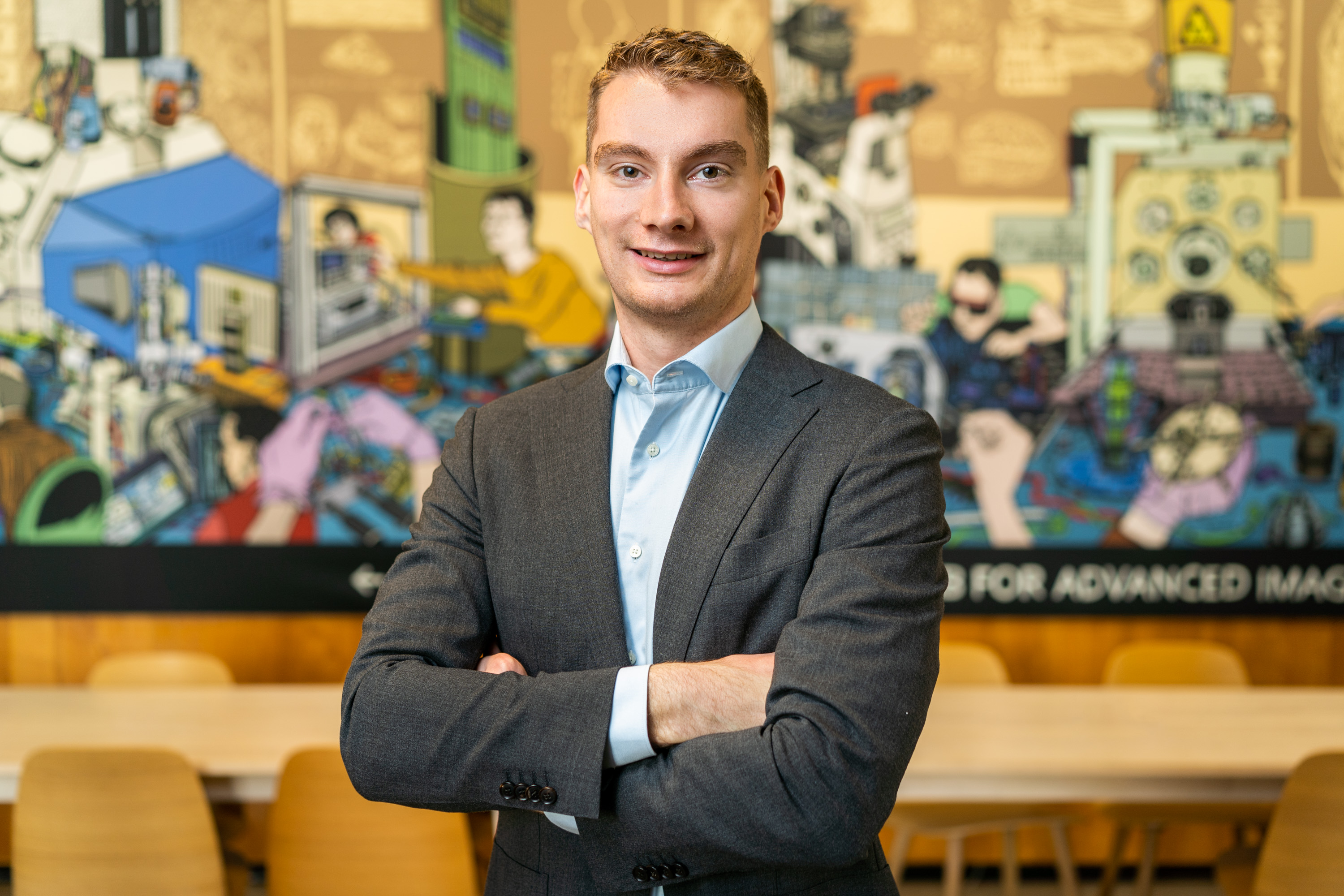 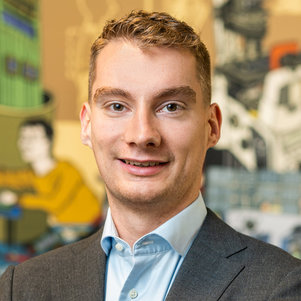 Rick Waasdorp has become the winner of the PHILIPS GRADUATION PRIZE TECHNOLOGY FOR HEALTHCARE SOLUTIONS with his research. He has been nominated for this by his supervisors. An amount of 3000 euros is attached to this price.