The birth of the Delfi-PQ mini satellite

Imagine being able to launch a satellite that would fit in your pocket and send it into space. It wouldn't only be cheap, it would also enable whole swarms of satellites to work together. A swarm would give a much clearer picture of the radiation in space and the atmosphere around planet Earth. In addition, a mini satellite could prove that small-scale technology can actually function in outer space. Early January 2022 the mini satellite of Alessandra Menicucci’s team was launched with a Falcon 9 rocket in the Transporter-3 mission of SpaceX from Cape Canaveral. The team hopes they will be able to breathe life into one of the world’s smallest satellites in space.

“It all begins once our satellite has reached outer space. That's when our baby will be born. The moment you first hear your baby cry is the most wonderful moment of your life. We hope that our mini will make a ‘beep’ sound. The satellite must do this all by itself - unfortunately we cannot offer assistance in any way. It has to draw its first breath by itself, just like a baby. It's going to be so exciting!”, says Alessandra Menicucci, leader of the project that is developing this satellite, which is about the half the size of its brothers  -and they were no bigger than a milk carton. One of them, called DelfiC3, is still alive in space after 12.5 years. Contact with the other one, Delfi N3xt, which has been in space since 2013, was recently restored.

The main advantage of mini satellites compared with more traditional satellites is the fact that they can work together in a swarm to take readings of a magnitude that larger versions simply are not capable of. This is possible because, first of all, small satellites are less expensive, which means you can launch dozens (or even hundreds) of them at a time. Secondly, grouped satellites are able to take readings from multiple locations and jointly correlate and process the data. This gives researchers a clearer picture of, for example, radiation in space or the atmosphere around the Earth. This doesn't work so well with single satellites, as it is more difficult for them to work together: They use different systems to take readings and the data they compile are not always compatible.

Monitoring climate change would be the ideal application. “My ambition for this satellite is to measure the density of the atmosphere at an altitude of between one hundred and three hundred kilometres. Very little is known about this area”, says Stefano Speretta, assistant professor in the Space Systems Engineering group. “A swarm of a hundred mini satellites would allow you to determine the amount of resistance each satellite is exposed to. This resistance tells us something about the density of the atmosphere and therefore about climate change. Miniaturisation has not only made this research possible, but has also made it affordable and accurate.” 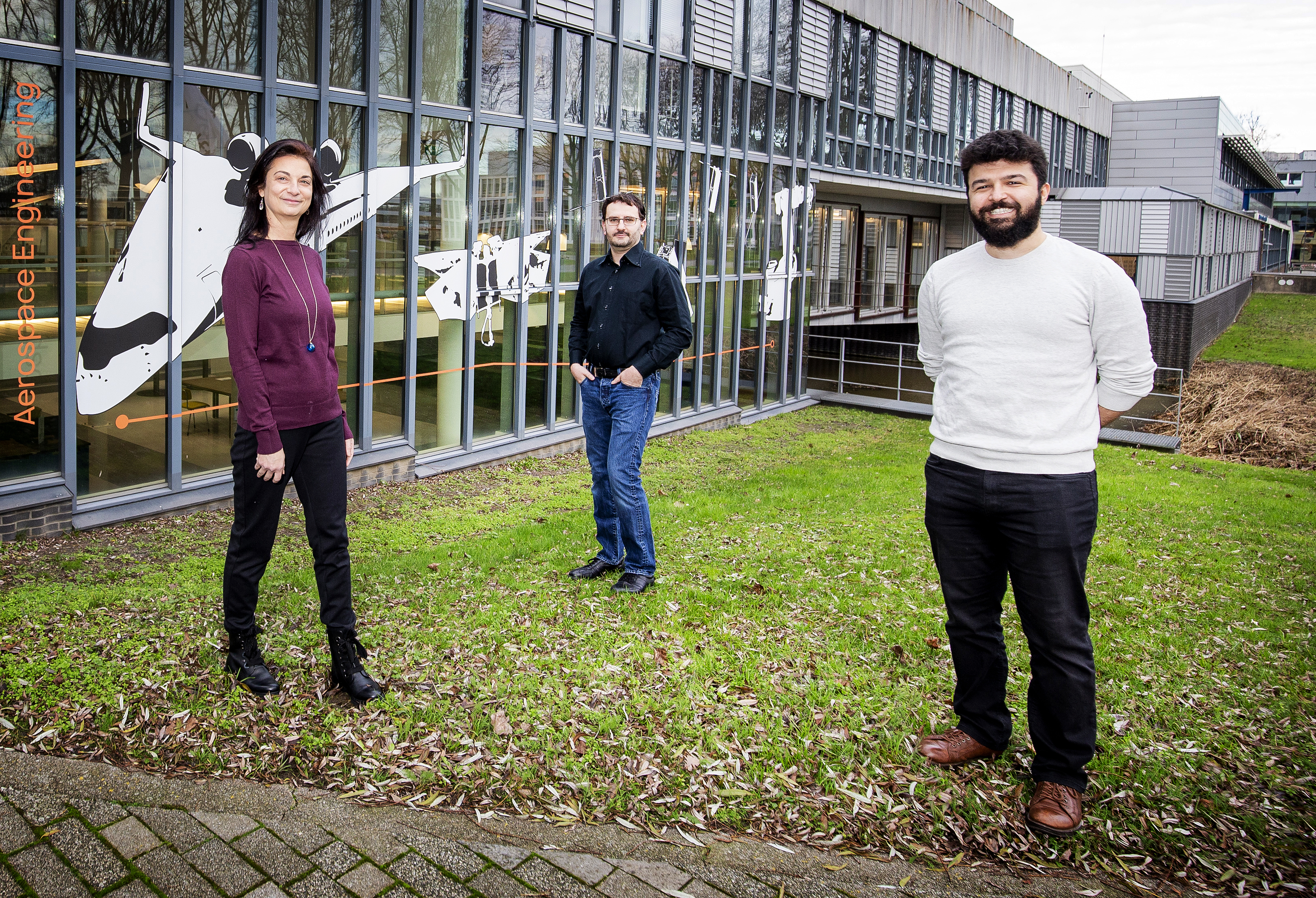 An important goal of these tiny satellites is that they prove that even miniature-scale technology can still function in space. And moreover, that the satellites can be monitored from Earth and can be distinguished from space debris. A big advantage is that the development time is much shorter than for larger satellites, some of which still run on 20-year-old technology. “We can build and launch a whole new generation of instruments every one or two years, so we can always incorporate the latest technology,“ says Speretta. In the future, satellite swarms may even play a role in high-speed wireless broadband connections.

The most difficult thing about building these tiny satellites is the lack of practical experience. This being a first, researchers had to build the satellites from scratch. “Each single part that we built had never been built before”, says Sevket Uludag, who is in charge of both electronics and mechanics. The biggest challenge facing them is the fact that the Delfi-PQ measures only 5 x 5 x 18 centimetres. As a result, all of the on-board systems that control the satellite in space (antennae, altimeters, power supplies) are much smaller than those in regular satellites. Researchers usually use ready-made systems, but now they have to produce everything themselves: from circuit boards to micro propulsion systems, and from reflectors to communication systems. “It's a bit like looking after a Bonsai tree - everything has to grow smaller”, says Sevket. 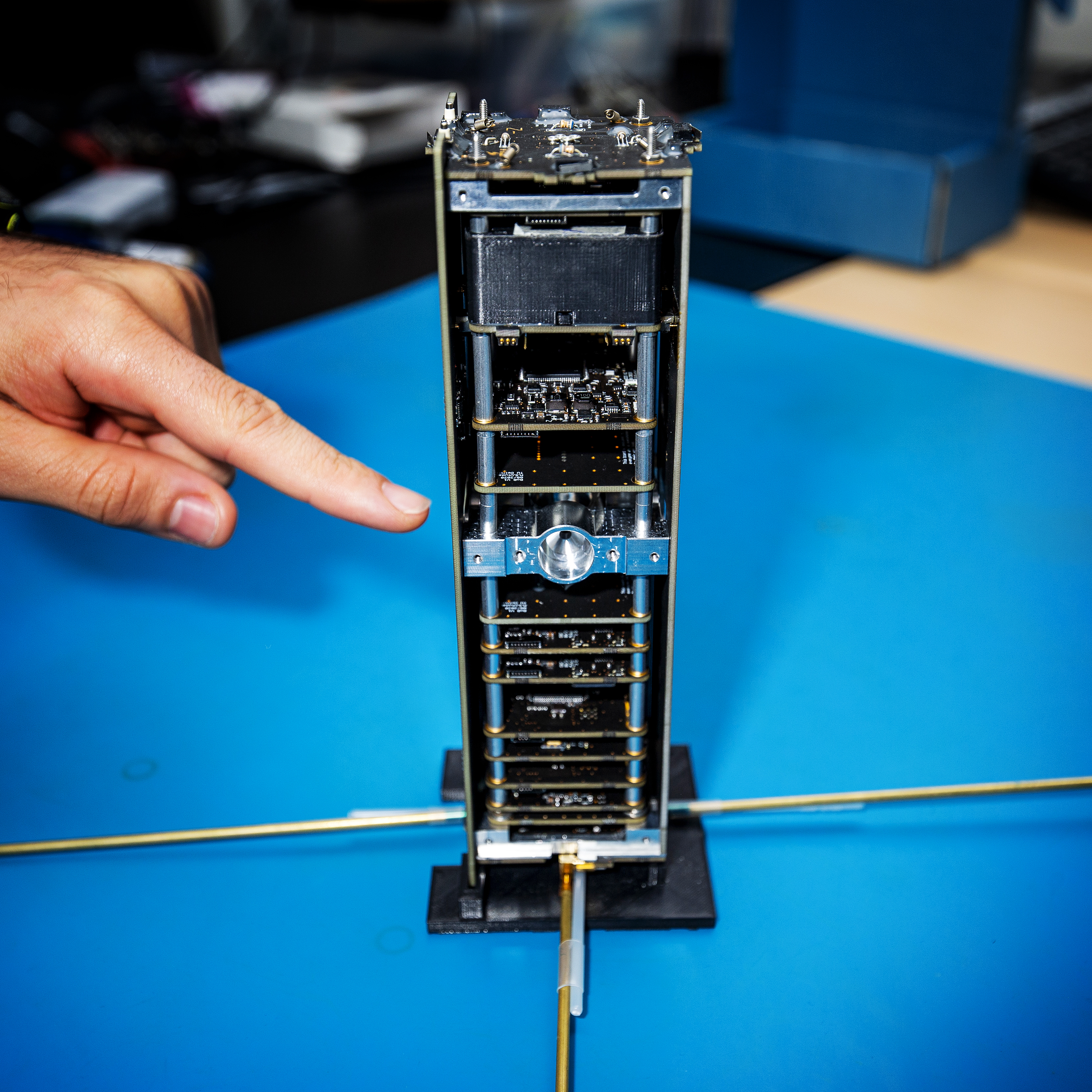 His team mate Alessandra continues: “I was used to working on much bigger satellites”. Before starting work at TU Delft, she had been involved in nearly all European Space Agency missions. “I thought: can I really build a reliable pocket cube with a small team, working to a deadline?” Her colleague Uludag continues: “When you're developing a regular satellite, at least one person is responsible for every system. Our Delfi-PQ has a staggering 14 systems, but we only have a team of three. That's what made it so stressful. We didn't just design the satellite, we built it with our own hands. COVID-19 meant that we had to do this in our home laboratory instead of at TU Delft. It's fair to say that our team worked on it for 12 hours each day. This is why I've inscribed the names of every team member in tiny print somewhere inside the satellite”.

The researchers think that they will be able to build satellites more quickly in the future. “Once we have confidence in our design, we can ask students to build these mini-satellites. This project is for the benefit of all future Aerospace Engineers”, concludes Alessandra.

The biggest technical challenge with miniaturisation is the power supply. “We had to generate electricity to power the satellite. This alone took two years. The parts simply did not exist when we started this”, explains Sevket. The satellite now has an on-board battery and the most efficient solar cells have been fitted. The fact that the team could learn little from the previous satellite also made things difficult. For a long time no contact was possible with the DelfiN3xt. The fact that the team could learn little from previous projects made things even more difficult. Most of the Delfi-PQ's predecessors failed to show any signs of life after their launch. To some degree they managed to learn from tests, but the coronavirus pandemic made this more complicated. “The vibration test is designed to prove that your satellite will not break into pieces. There were many Covid-19 infections in Delft during the summer of 2020, so initially we weren't allowed to drive to the test facility in Hengelo. But eventually we got permission. We were worried that the Delfi-PQ might not survive the long drive, but fortunately it did. We were so pleased that we did a little dance on the spot”, Alessandra remembers.

There is also the technical issue of whether a small satellite like this can be monitored from Earth and won't be mistaken for a piece of space debris. Stefano: “Our satellite has been fitted with a piece of glass so that it can reflect laser beams from the ground. This helps the people on Earth to pinpoint satellites in space. Having said this, it will take a few months before they can trace the Delfi-PQ. It's pretty busy up there in space.”

On 13 January 2022 the world's smallest satellite was finally launched. The Delfi-PQ should have gone into space in late 2018, but the builder of the Vector R rocket went bankrupt. “This was extremely frustrating for the team”, says Alessandra. “Each rocket comes with a whole range of specifications, and you have to make sure that your satellite meets highly specific requirements. Luckily, we had another opportunity with another rocket. We were just getting over the disappointment, wondering whether we should take this new opportunity at all. But we did, and as you can see, we were highly motivated to get this mini satellite off the ground!” On 14 January there’s more good news. On 11.21 hrs CET the team established contact with DelfiPQ. The baby’s been born.