Vessels are a significant source of unwanted emissions worldwide, not only of CO2 but also of NOx and particulate matter. This has become untenable in light of increasingly strict environmental requirements. The shipping sector really needs to change its course now. The first steps towards zero-emission transport are being taken in inland waterway shipping, maritime transport and ports. Dennis Lensing knows all about it. “It must and can be more sustainable. The first important step towards safe navigation on hydrogen has now been taken.”

In a month’s time, the Port of Amsterdam will present the design of a new, almost 20-metre-long vessel that operates completely emission-free and is built based on circular design principles. Lensing was closely involved in the design process. He developed a technology that produces hydrogen on board a vessel from the substance sodium borohydride, a raw material that is both clean and can be safely stored. This is a promising development and a milestone for the shipping industry.

“It’s an exciting time for shipping,” says Dennis Lensing, junior researcher of marine technology at TU Delft. “Many scientists are focusing on sustainability. No one can deny any longer that sustainable techniques will be the norm in the future. Fossil burning on ships is now really on its way out. Stricter climate requirements have made everyone aware of the need to make the whole sector cleaner and abandon old traditions and working methods. Where it’s possible to prevent emissions and pollution, we should at least do our best to improve the current situation. This way of thinking and the aim of achieving emission-free vessels by 2050 is a game changer for the entire shipping sector.”

“As a researcher at TU Delft, I’m here at exactly the right time and in a unique position to experience this up close: we’re witnessing all the developments. It fascinates me that techniques which are being invented now and are still in their infancy will probably be the most normal thing in the world in the future. It’s exciting to see exactly which way it’s going. I’m very curious about the future.”

“The Paris climate targets must be met, and vessels also need to meet the requirements of the International Maritime Organization (IMO). The IMO has set a requirement that by 2030 emissions per kg/per nautical mile must be reduced by 40% compared to 2008; and by 2050 this must increase to 70%. The industry is already aware that meeting the standards for 2050 will not be possible with the (fossil) fuels currently in use. A large battery-powered ship is not going to work. They’re not energy-dense enough (too big and too heavy). In the near future, until 2030, the industry is likely to use Liquid Natural Gas (LNG) as a kind of transition fuel; it’s highly efficient and considerably cleaner than diesel. But of course this is still a fossil fuel, so you’re still stuck with CO2 emissions.”

“In the long term, I think you’re always going to have to move towards hydrogen,” says Lensing. “You can do that with fuel cells that run on hydrogen or with a synthetic fuel, which you ultimately also have to produce from hydrogen. However you look at it, running vessels on hydrogen is a hot issue, but until recently we were still missing a piece of the puzzle. The problem with running hydrogen is that people are easily deterred by the thought of large storage tanks full of highly flammable hydrogen. That can be dangerous. There are technical solutions that make safe storage possible, but it requires a long certification process. That’s why I, like many other scientists, am looking for alternatives that don’t store the hydrogen itself but rather a non-hazardous raw material that is chemically converted into hydrogen when the fuel cells need it. NaBH4 (sodium borohydride) offers interesting possibilities in that respect.”

Hydrogen as the key to a sustainable shipping sector 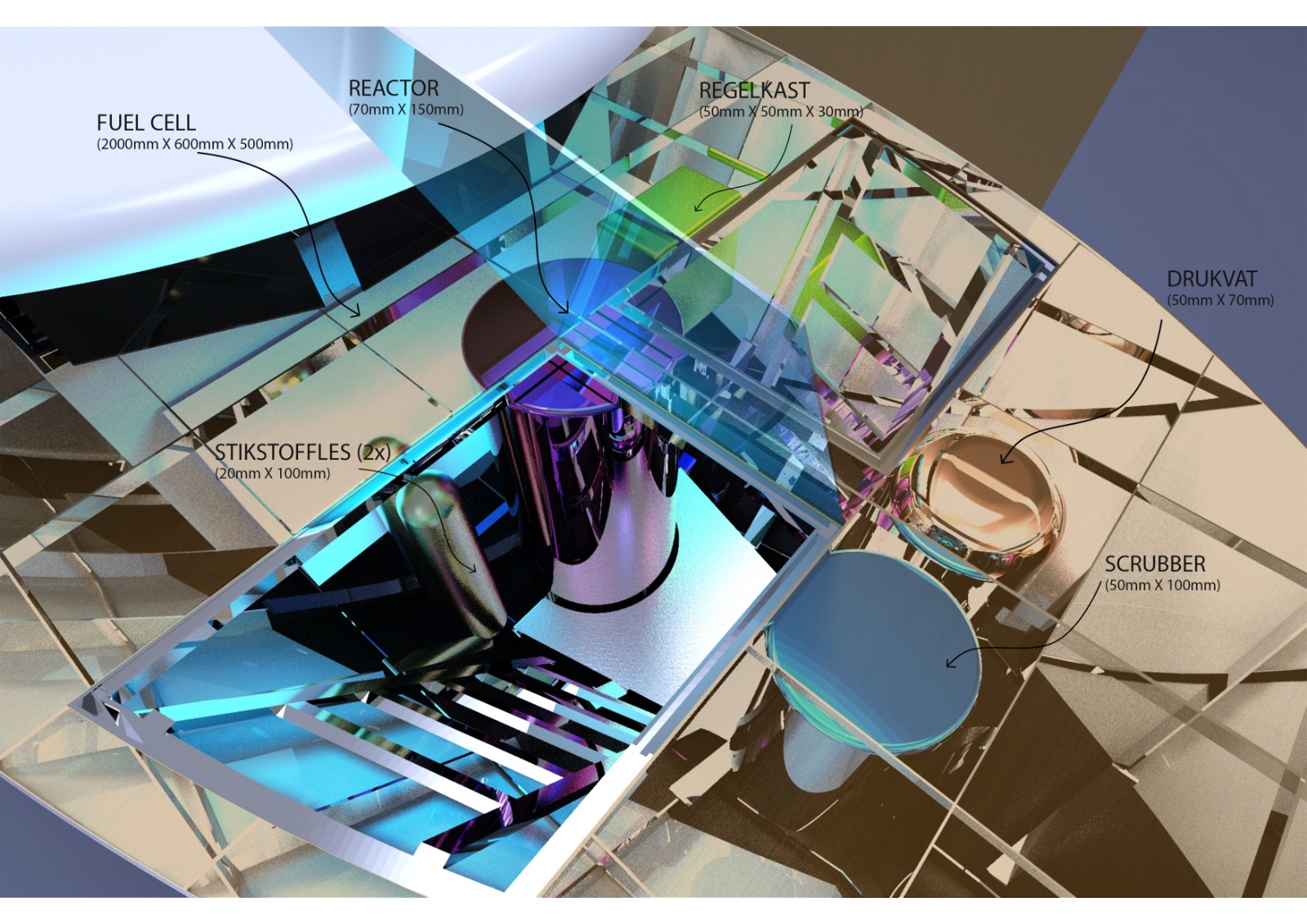 “Hydrogen as a future fuel is currently a popular notion in shipping, but until recently we were still missing a piece of the puzzle. People are deterred by the thought of large storage tanks full of highly flammable hydrogen. I, like many other scientists, am looking for alternative methods for safe storage. The use of sodium borohydride as hydrogen carrier is an interesting option.”

In the long term, I think you’re always going to have to move towards hydrogen.

Sodium borohydride (NaBH4) is a sodium compound from which hydrogen can be extracted. The material is a harmless white powder which used to be found in washing powders. “The automotive industry has already investigated sodium borohydride as an option. Car manufacturers really started to look seriously at hydrogen-powered cars around the year 2000, and in 2004 there was even a test car running on sodium borohydride. Yet they stopped this line of research. One of the reasons was that the sodium borohydride reacts with water to produce hydrogen. So you would need to store water in the car, which isn’t practical. In shipping, however, we are always in an environment with a lot of water, so that problem does not arise. In the technique that we’re currently using, it’s essential to use very pure water. So the water used on the ship has to be filtered first.”

Another objection to sodium borohydride until recently was that the release of the hydrogen from the compound was not efficient enough. The company H2Fuel Systems took an important step in the further development of sodium borohydride a few years ago. In this approach, sodium borohydride is brought into contact with extremely pure water and a catalyst. This new approach increases the efficiency of the reaction. This means that all of the NaBH4 is converted. Previously, the reaction wasn’t complete and only 80% to 90% was converted. In collaboration with TU Delft and others, H2Fuel Systems is currently working hard to scale up this process. 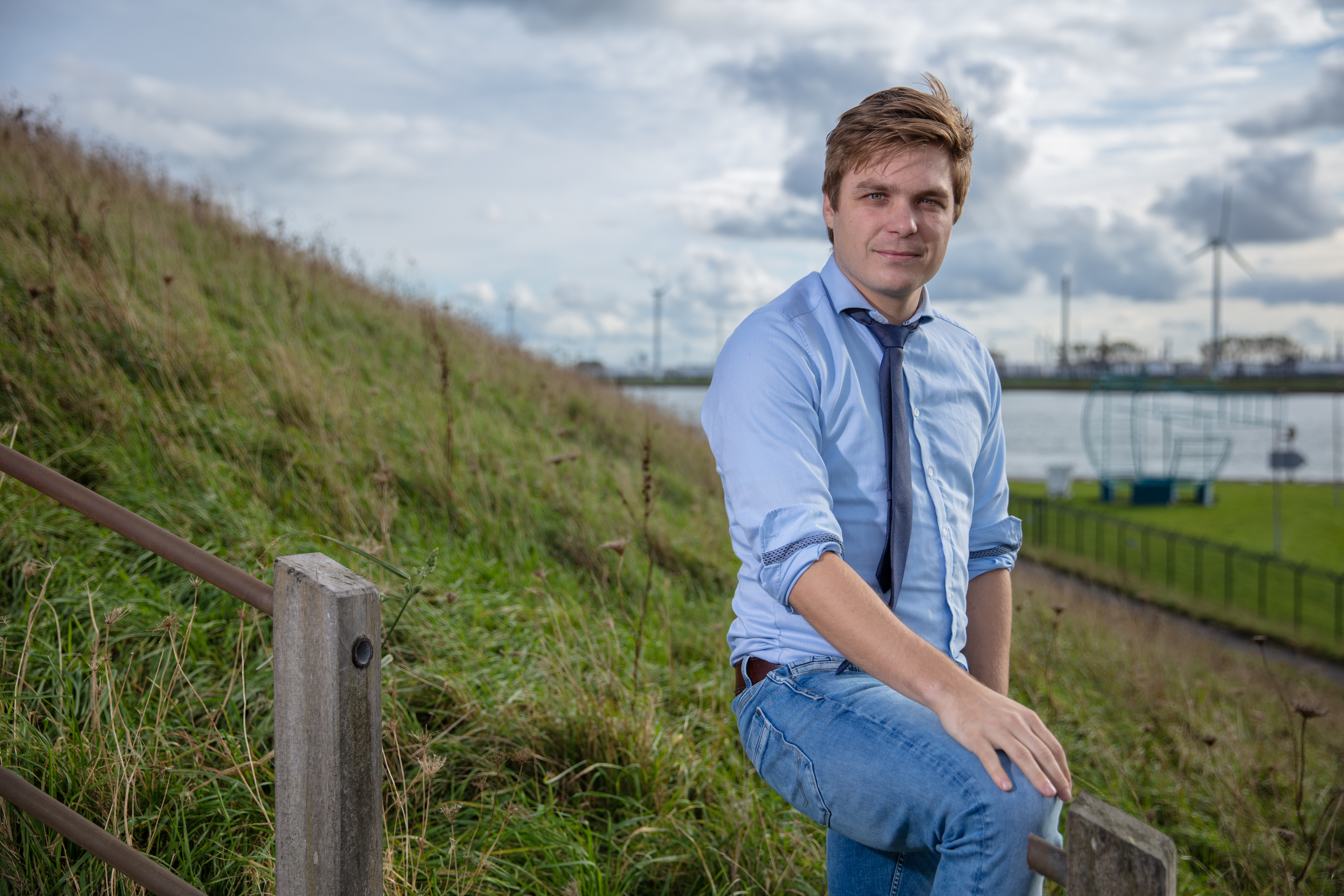 Soon, the Port of Amsterdam will present the design of the first, almost 20-metre-long, vessel (with about 90 kW of power) running on hydrogen from sodium borohydride. The development of the ship is part of the European research programme H2SHIPS, which includes concrete pilot projects, of which the Amsterdam vessel is one.

Dennis Lensing: “This is the first time that this technology has been applied in the maritime sector. The vessel will probably be launched in late 2021 or early 2022. Measurements and verifications will then be carried out, for example on the emissions saved and to determine how efficiently the catalyst works. After that, the ship will ‘just’ be used as the new management vessel of the Port of Amsterdam: De Havenbeheer.”

The management vessel is a representative boat used to show potential clients or dignitaries around the port and the city. “The detailed design for the ship comes from Wijk Yacht Creation, but as a researcher I’m involved in a wide range of aspects. My colleagues and I fulfil the role of advisor, for example regarding the dimensioning of the fuel cells and the fitting of the different systems. The vessel is only part of all the plans, by the way. Ideally, a production facility will be developed, also in the vicinity of Amsterdam. This should also increase the economic feasibility of this technology.”

“In the past few years, this upscaling has had its positives and negatives,” explains Lensing. “The action of the catalyst has been a very positive aspect. Initially it was assumed that hydrochloric acid would be used as activator of the reaction, but this is not to be preferred. There are now catalysts being studied, including cobalt-based ones, and this is looking good.”

One of the biggest remaining challenges is regenerating the residual product of the reaction: sodium metaborate (NaBO2). That would make this fuel circular. Recycling sodium metaborate is a rather energy-intensive process, so the costs are still high. TU Delft and the University of Amsterdam are currently researching cost-effective solutions using renewable wind or solar energy. The aim is to achieve a completely emission-free, circular ship fuel.

If we want to have a Smart Grid for our power supplies in the future, there will need to be a substantial over-capacity of wind and solar energy. This over-capacity can be used during stormy or extremely sunny days to produce hydrogen. In addition, it will be more appealing to generate energy elsewhere when this technology becomes cheaper.

To be able to transport this energy easily, it must be converted into e-fuels. These fuels also have to be produced efficiently and transported relatively easily. Sodium borohydride also offers this possibility because its high energy density makes it cheap to ship (as cargo).

Indeed, there is a lot of interest in the sodium borohydride option. Consideration is even being given to the possibility of large vessels using sodium borohydride, but the initial target is 200 kW to 400 kW, for use in inland navigation. Applications in the short sea sector are now also being seriously investigated.

Read more about the H2SHIPS project