After two life-changing moves, Angelo Accardo is now exactly where he wants to be. He is developing engineered nanoscaffolds, in which human tissue can grow as in nature. It opens up a world of applications for neural disease modelling and could even result in the affected parts of the central nervous system being replaced after a stroke or spinal cord injury.

‘When I literally saw for myself how neural cells could grow in the little scaffolds that I developed, just like in our bodies... It was an amazing moment. I remember telephoning my wife and shouting: “It works!”’ That was in 2017, when Angelo Accardo was working at LAAS-CNRS, a research institute in Toulouse. He succeeded in building soft scaffolds at nano-level, in which living cells can grow just like they do in our bodies. In a petri dish, the tissue remains flat and the cells assume a configuration that does not resemble the one of the natural tissue. In Accardo’s little scaffolds, neuronal cells can mimic brain tissue just like in nature. This has literally opened up a new dimension for the world of in-vitro tissue culture. 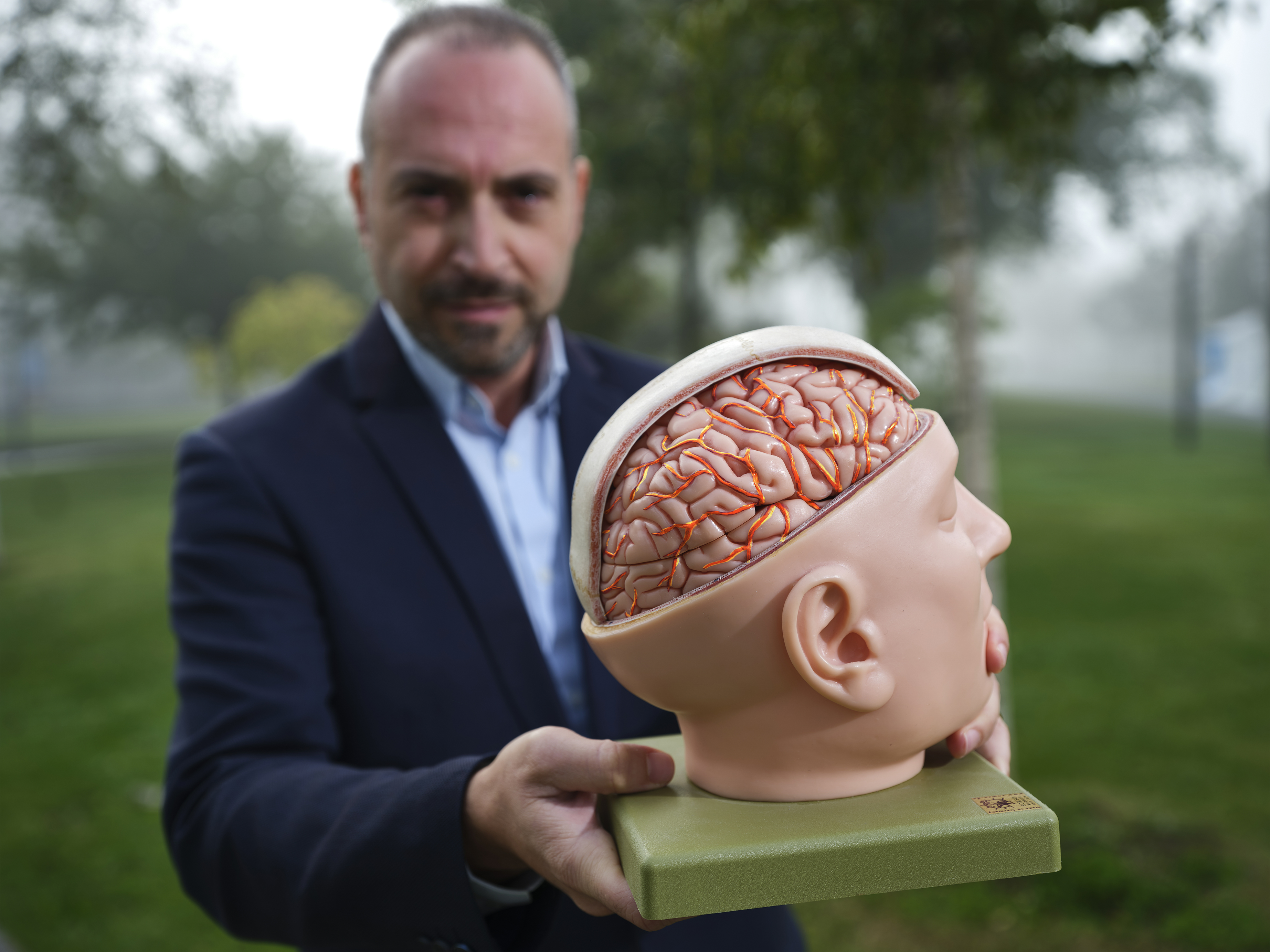 With and without autism

Accardo has continued working on his finding in Delft since 2019: in the Faculty of Mechanical, Maritime and Materials Engineering (3mE), he now has his own group of researchers in the Precision and Microsystems Engineering (PME) department working to develop his invention for some amazing applications.

Thanks to a grant from the Dutch Research Council (NWO), Accardo will now be able to work with scientists from Vrije Universiteit Amsterdam on the culture of stem cells from people with and without autism spectrum disorders. ‘If we observe that neuronal structures grown in our 3D microenvironments behave differently in someone with autism, that will help with diagnosis. It will also open up the road towards research into therapy.’

Recently, Accardo launched also another research line on the development of 3D biomimetic scaffolds for the study of glioblastoma, the most lethal brain cancer, under proton radiotherapy. ‘It was an incredible revelation when, in May 2021, a Master’s student demonstrated how brain cancer cells in 3D respond differently to proton radiation therapy than in a 2D culture. We could clearly compare the amount of DNA damage in both models.’ NWO then provided a grant for a research project with Leiden University Medical Center and Holland Proton Therapy Center to further assess how patient-derived deadly brain tumour 3D models respond to a potential therapy using proton radiation. 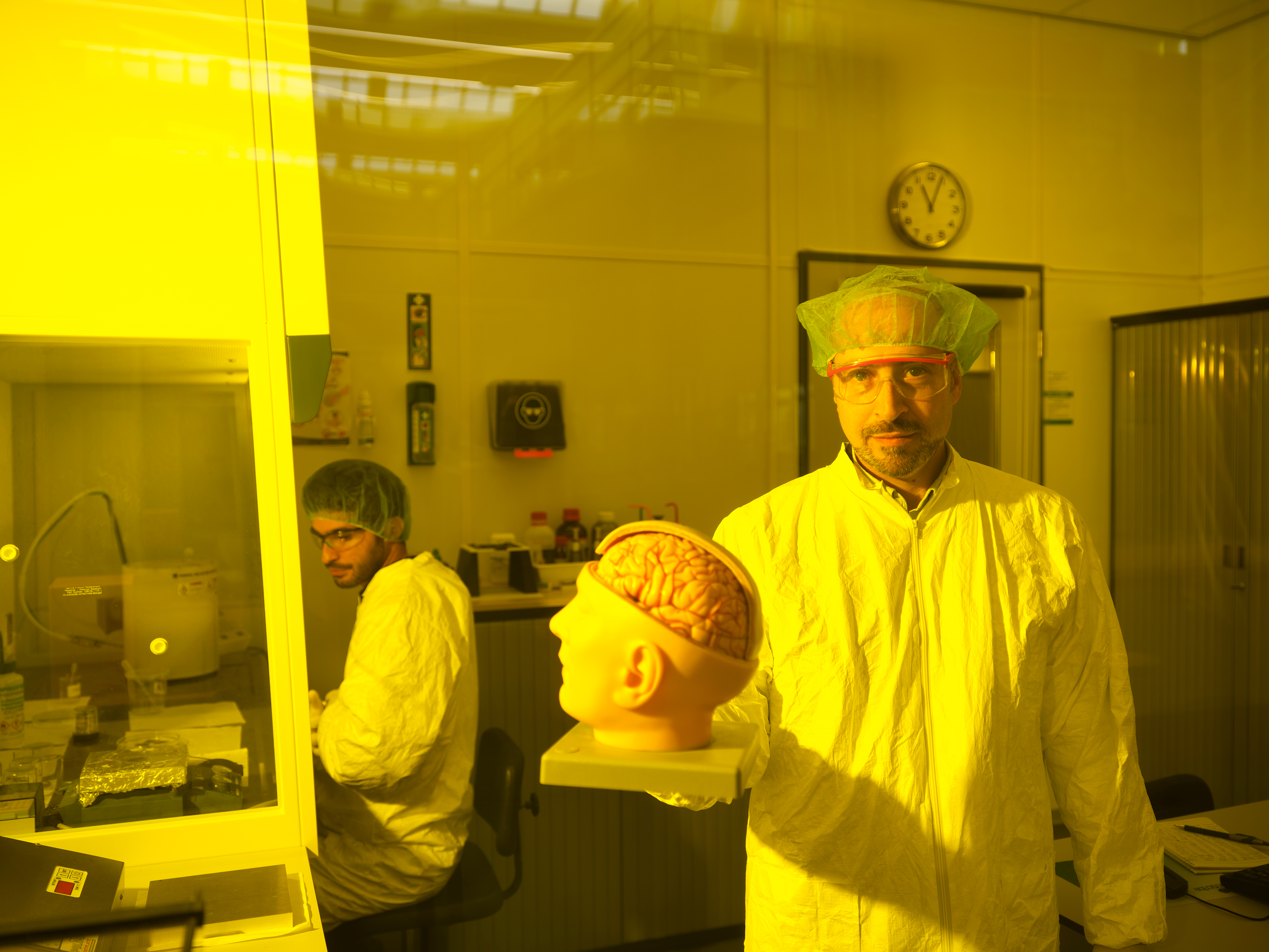 In time, Accardo hopes to be able to extend the range of applications to neurodegenerative diseases like Alzheimer’s or Parkinson’s. In a longer term perspective the researcher hopes to integrate his scaffolds into damaged regions of a human brain to regenerate tissue affected by stroke, for example. In theory, it could also be possible to treat spinal cord injuries, which cause paraplegia or tetraplegia, using an implant of tissue-cultured nerve cells. ‘A lot more needs to happen for that to be possible, such as growing larger pieces of tissue, millimetres or even centimetres in size rather than micrometres, as now. We also need to be able to make the scaffolds using material that is safe to implant, and it needs to disappear from the body after a period of time.’

From aviator to scientist

‘A good idea, determination, outstanding collaborations with cellular biologists, and a bit of luck.’ According to Angelo Accardo, these were the four factors in his recipe for success. Initially he had no plans to become an academic. After secondary school he joined the Italian Air Force Academy. ‘It was an amazing experience, but I gradually realised that spending all my time in an aircraft was not for me.’ Accardo then opted to study electronic engineering and started working in the automotive industry FIAT in Turin. ‘Soon it became clear that classical engineering was also not what I wanted to do. I had always been interested in the brain and fascinated by nanotechnology. Therefore, I opted for academia in the end. I think that my past experiences in the Air Force Academy and in a company setting contributed to my growth as a person and eventually led me to my real dream, doing science.’

Accardo wondered: what do I want my legacy to be? He immersed himself in exploring the possibilities of three-dimensional cell-tissue culture. He had no idea if it was possible. Experiments failed, and many doors remained unopened at the start. ‘Every failure leads to reflection and improvement.’

Using special 3D printing technology and two types of laser manufacturing techniques – two-photon polymerisation and stereolithography – he ultimately succeeded in achieving the right structure at micrometre scale or even smaller. ‘We then had to identify the most suitable material: not toxic to cells and sufficiently soft. Brain tissue grows most naturally in very soft material. In it, the cells can create many more connections with each other than they can in slightly harder material.’ 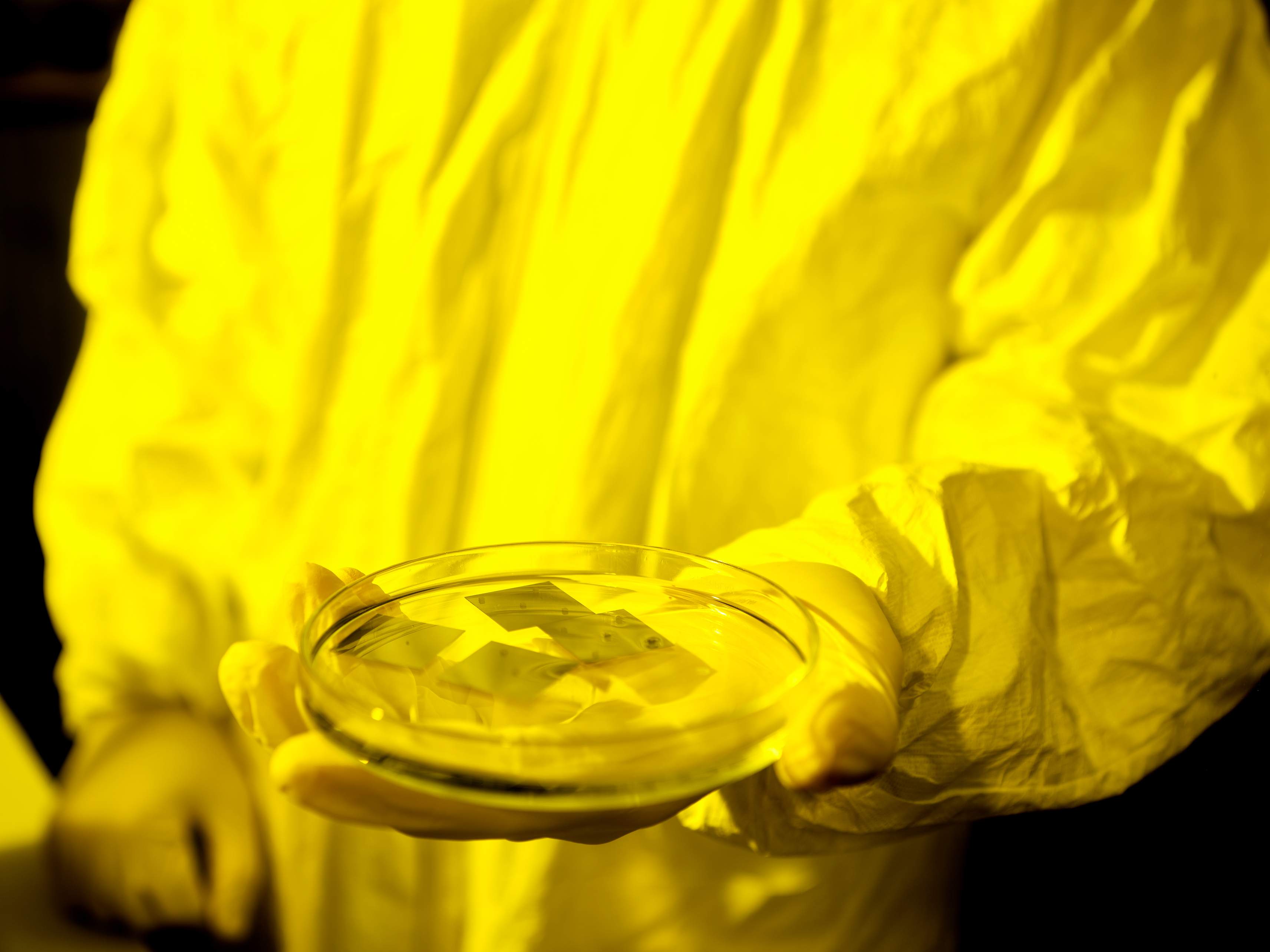 In order to see all of this, just being able to make his scaffolds was not enough for Accardo. ‘You do not only need to be able to make them, you also need to be able to see what’s happening in the scaffolds. For that, you need special imaging technology, and I succeeded to shed light also in the most hidden regions of the 3D structures.’ It proved successful and the time came when Accardo was able to make that excited telephone call home to announce his success.

Accardo’s 3D cell-culture models make it possible to study diseases outside the body in a very realistic way. ‘Currently, it costs on average €1 billion to develop a new drug and takes approximately twelve years to bring it to the market. You start with tissue culture in a petri dish, testing thousands of compounds that might prove effective as a drug. You then test the successful compounds on animals, resulting in no more than a small selection that you can test on humans. The step from in-vitro in the petri dish, to in-vivo research on animals and humans is extremely time-consuming. In addition, the leap between in-vitro 2D tests and in-vivo ones is huge given the difference between the two models. Our realistic 3D models can pave the way to perform drugs research faster, more efficient and with less animal testing.’ 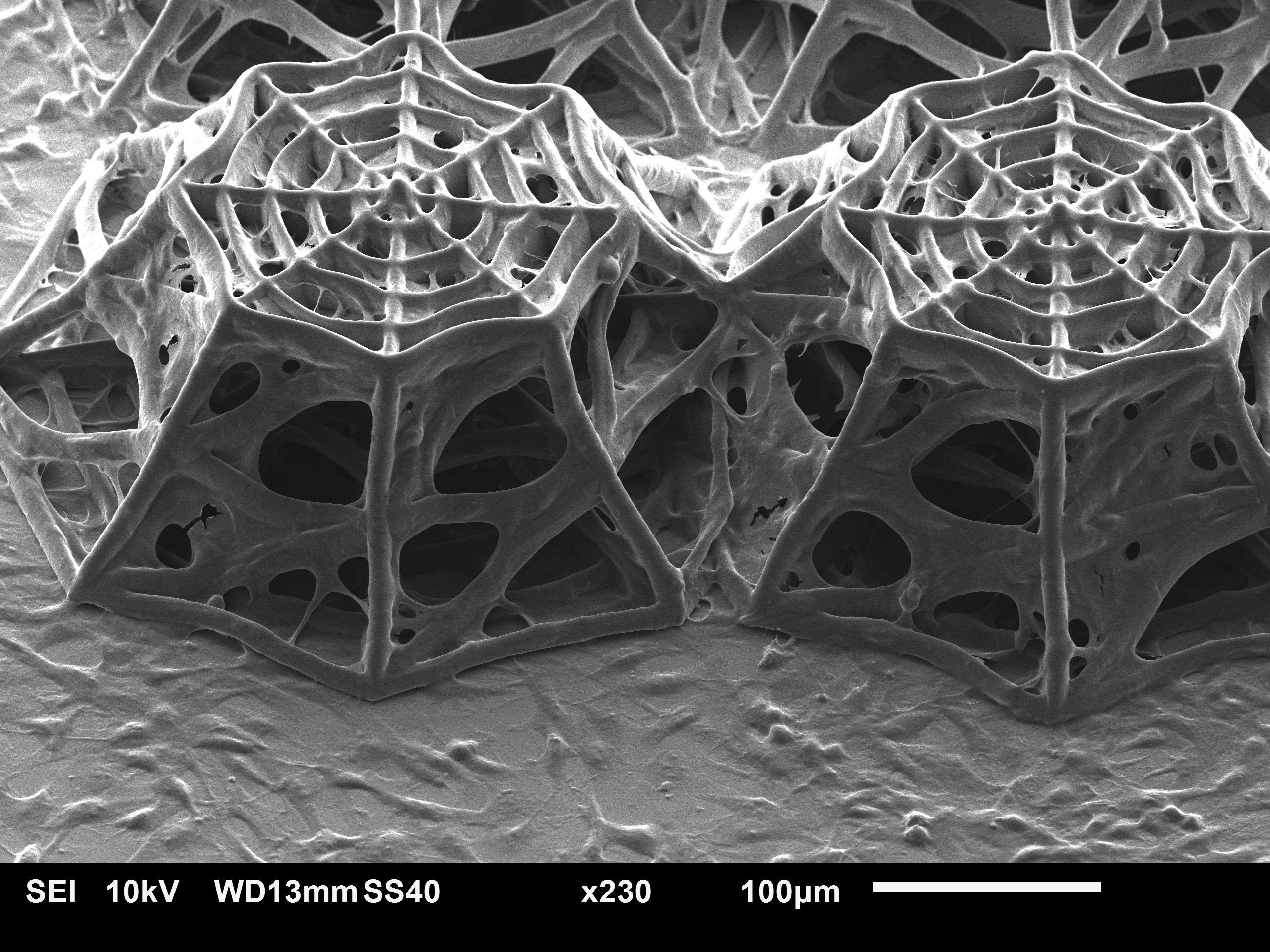 ‘Having now been able to achieve this from a standing start, I realise that this is ultimately what I’d like to be known for. I want to develop a scaffold technology to unveil both basic cell biology mechanisms (mechanobiology) and to tackle diseases that affect our society. I wish to be that person every cell biologist can refer to when they want to collaborate on projects that require 3D culture.’ With a smile, he says: ‘I won’t have any need to switch careers again in the next three decades. By focusing on the brain, neurodegenerative diseases and brain cancer in particular, I hope to be able to make a major contribution to healthcare.’

Such an enthusiastic researcher, working on such promising technology: surely he is always working? ‘That certainly used to be the case,’ laughs Accardo, ‘but my daughter’s birth in 2017 changed everything. Now, quality time with my family is so much more important and the same applies to my family in Italy.’ Who knows what difference Accardo’s invention will make for countless families who face dementia, cancer or stroke in the future?

Further information about the NWO projects on glioblastoma and autism. 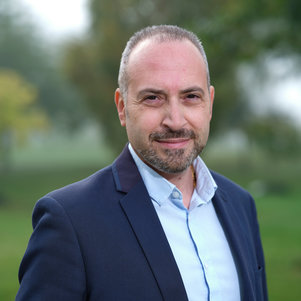