Chatbots, on eHealth apps, have the potential to support people suffering from anxiety and other mental disorders. However, today’s chatbots still need to be sufficiently developed. For her Master’s thesis, Maria Chiara Mazza investigated how recognising students' linguistic patterns and personality could help improve the workings of personalized-chatbots. Her thesis secured her election as the Best Graduate in the Faculty of Technology, Policy and Management.

Panic attacks, fear of failure, extreme anxiety. As many as one in four will be affected by mental health or neurological disorders at one point in their life. What makes the issue particularly problematic is the fact that sufferers are also likely to be afraid of enlisting help, says Maria Chiara Mazza (25), who completed her Master's in Management of Technology in July. “They usually prefer not to talk about their problems with other people, even with friends, for fear of being judged. In addition, apart from geographical and monetary barriers, there are long waiting lists for clinical services. If not treated in time, anxiety disorders can actually lead to both physical consequences, such as blood clotting and issues with the nervous system, and other psychological issues, such as depression and even suicide.” 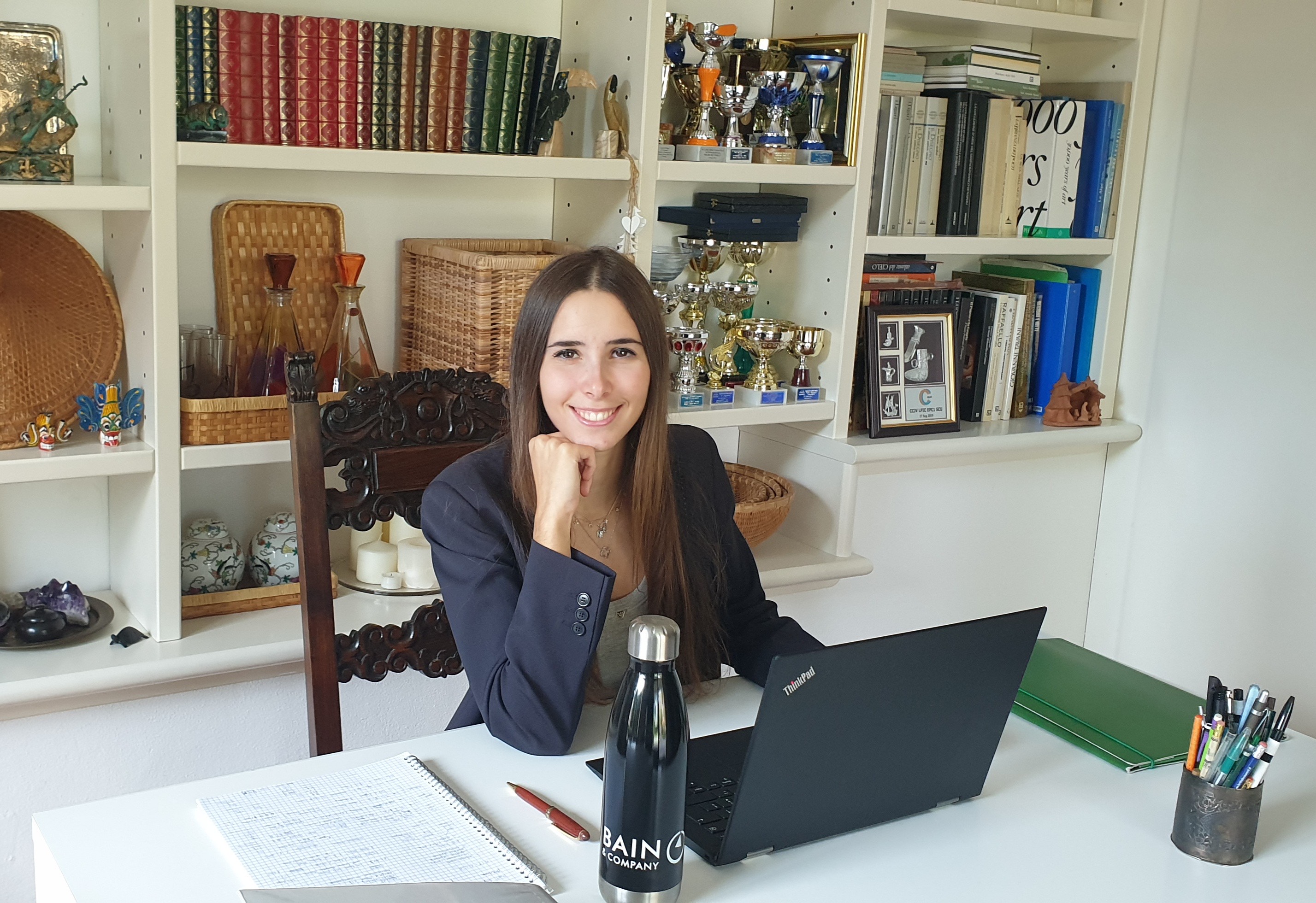 Research shows that two-thirds of people with mental disorders are less than 24 years old. Maria Chiara: “Once, I read an article showing anxiety as one of the top disorders among students. There are different roots of anxiety: for instance, students may be anxious about speaking another language, or be afraid of failing exams or talking to people. I’ve personally seen similar anxiety among some people I met during my master’s. The problem is compounded by the fact that students are often short of money and that the wait for a clinical consultation is sometimes longer than three months.”

To Maria Chiara, this problem was a great opportunity for combining her knowledge and background with her interests. “I became interested in technology and how things actually work at an early age. It is why I did a Bachelor's degree programme in Industrial Engineering in Milan. Eager to explore the applied side of technology, I came to Delft to do the Master's in Management of Technology two years ago. I am particularly interested in the use of technology in the healthcare sector, because of its huge potential for society. With my thesis, I aimed to use technology to improve the situation of students suffering from anxiety disorders.”

Technology and artificial intelligence are playing an increasingly important role in treating anxiety disorders, continues Maria Chiara. “With intelligent eHealth apps, like Babylon Health and Tess, people can talk to chatbots about their problems and get advice on help and treatments. The main advantage of an eHealth app is that it is cheaper than a consultation with a real psychologist or therapist, easy to install on a phone or laptop, and always available. It is also less likely to deter people who are scared of being stigmatised. An app is not prejudiced.”

When she explored them more closely, Maria Chiara noticed that chatbots have yet to reach the optimum stage of development. “Chatbots focus primarily on factual information and hardly distinguish personality traits. Someone’s personality is actually very important for proper diagnosis and targeted treatment. In my thesis, I aimed to show that personality traits influence how people communicate and how people with or without anxiety disorders differ in that respect. There had never been any previous research on the link between these three aspects. My main hypothesis was that people with anxiety disorders use different types of words than people without, and that their  behavioural systems have an influence too.” 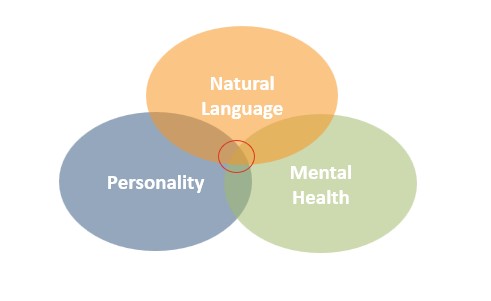 A total of 142 students of different nationalities took part in the research. A survey was used to determine whether a participant suffered from generalised anxiety disorder (GAD). Their personality was also rated. Maria Chiara: “After the survey, the students were asked to do a 100-word writing assignment, describing how they felt during an anxious or stressful experience from their student days. It was not so much the facts that they wrote about, but the emotions, feelings and thoughts they articulated that interested me.”

Other emotions and words

Although the research was not focused on nationalities, Maria Chiara also detected several interesting differences between students with a different cultural background. “Dutch people with anxiety disorders have a tendency to use words associated with death, whereas Italians choose angry or sad words. The fact that participants had to write the assignment in English was a limiting factor, for that matter. You don’t know if someone’s linguistic patterns would be the same if they were communicating in their native language. That would be a good subject for further research.”

Maria Chiara believes that the results of her research can help to improve chatbots. “If chatbots can recognise linguistic patterns and personality traits, they can offer more personalised treatments to the user. For example, if a chatbot notices that a user’s language consists of many negative emotions or words, it can recommend a specific treatment depending on the user’s personality and anxiety level. Of course, I am not suggesting that chatbots should replace real therapists. They are an easily accessible first step for people who find it difficult to look for help. With a chatbot, people can start to become accustomed to talking about emotions, whenever and wherever they want.”

Maria Chiara's thesis proved its value even during the research itself. Maria Chiara: “One of the participating students confessed to me that writing about her feelings helped her being able to engage more effectively in self-reflection, while having a better idea of how to deal with her fears. It is extraordinary how my thesis might contribute in helping people with psychological problems. Although the thesis involved students with generalised anxiety disorders, its findings could also be worthwhile for chatbots aimed at people with different psychological problems. I hope to be able to pursue the subject further in the future, perhaps by developing a personalised chatbot at TU Delft.”

The fact that she was ultimately awarded a 9 for her thesis and chosen as the Best Graduate in the Faculty of Technology, Policy and Management (see box), makes her especially proud. “That really came as a surprise. It is thanks to the smart and inspiring people I met and worked with at TU Delft that I could reach this achievement. Of course, it was a shame that the coronavirus made some aspects difficult, especially in terms of communication with students and with my supervisors. However, the fact that many students were at home may have helped, because they probably felt more involved in the experiment. In the end, I was able to do everything I wanted in my research. I am hugely proud of this result.”

Back to all stories
More stories about the theme:
Artificial Intelligence
Digital Society
Responsible Innovation 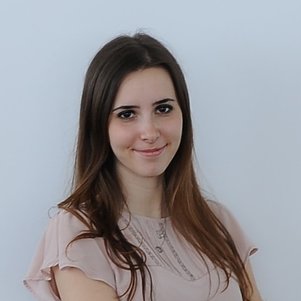 Maria Chiara's being elected the faculty's Best Graduate can be attributed specifically to the innovative nature of her research. According to her supervisors, who nominated her, she is the first person ever to have demonstrated the link between linguistic patterns, anxiety disorders and personality traits. Her findings could be of great value in terms of practical applications, they say. They also highlighted the fact that her ability to complete her research in the space of six months, even during coronavirus, was particularly impressive. Together with the best graduates from seven other faculties, Maria Chiara is now in the running for the title of Best Graduate of TU Delft, to be announced on 17 November.