The TU Delft Wind Energy Institute (DUWIND) organizes monthly (online) lectures focused on new developments, challenges and ongoing research related to Wind Energy. DUWIND is a member of the European Academy of Wind Energy (EAWE). Inspiring researchers from member institutions are invited to present their research. DUWIND is happy to welcome Mario Rotea, Professor of Mechanical Engineering at University of Texas at Dallas for their lecture in June.

Titel: Extremum Seeking Control of Wind Energy Systems
Speaker: Mario Rotea, Professor of Mechanical Engineering at University of Texas at Dallas
Date: 24 June 2021, 16h-17h (CEST)
Please register here
You will receive an link to the online lecture shortly before the start. The lecture will be recorded and the recording will be shared with registered participants afterwards.

Introduction
Mario A. Rotea is the holder of the Erik Jonsson Chair in Engineering and Computer Science at the University of Texas at Dallas, where he is a professor of mechanical engineering. He is cofounder of "WindSTAR," an NSF Industry University Cooperative Research Center aimed at bringing together academia and industry to advance wind energy through industry-relevant research. Rotea is also the director of "UTD Wind," a center recently created at UTD for the advancement of wind energy science and engineering. He joined UTD in 2009 to serve as professor and founding head of the then newly-created mechanical engineering department. During his eleven-year tenure as department head, student enrollment grew to 1,300 students and a brand new 200,000 sqft building was constructed to house mechanical engineering.

Rotea spent 17 years at Purdue University as a professor of aeronautics and astronautics, developing and teaching methods for the analysis and design of control systems. He also worked for the United Technologies Research Center as senior research engineer on advanced control systems for helicopters, gas turbines, and machine tools. Rotea was the head of the mechanical and industrial engineering department at the University of Massachusetts Amherst, where he expanded the department in the area of wind energy and applications of industrial engineering to the health care sector. His career includes terms as director of the Control Systems Program and division director of Engineering Education and Centers at the National Science Foundation (NSF).

Rotea is a Fellow of the Institute of Electrical and Electronics Engineers (IEEE) for contributions to robust and optimal control of multivariable systems. Rotea graduated with a degree in electronic engineering from the University of Rosario. He received a master’s degree in electrical engineering and his PhD in control science and dynamical systems from the University of Minnesota. 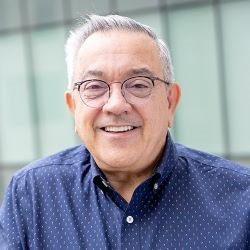