Benjamin Mimoun: “Heart attacks are the main cause of death in the west. They usually result from stenosis, a narrowing in the arteries caused by the deposition of plaques. The blockage leads to a reduction in blood flow to the heart muscle, which may set off a heart attack. The severity of stenosis is assessed by X-ray imaging, but X-ray pictures of arteries, being 2D representations of 3D phenomena, are hard to interpret. An alternative is to go into the artery with a thin guide wire, such as used in cardiac catheterisation, equipped with a miniature pressure sensor on the tip. Because it has been shown that simultaneous measurement of pressure and blood flow improves the diagnosis, we are developing a combined flow and pressure sensor chip based on state-of-the-art technology. It is a smart system-in-package that also comprises signal processing and a wireless power and communications link.”

The main challenge is posed by the small dimensions of the guide wire: it is only 300 micrometers in diameter - three human hairs put together. To make things more complicated, the researchers want to put not one, butthree flow sensors on the wire, in order to get a 3D representation of the blood flow. The solution is to embed the sensors into a flexible foil that is bent around the wire.
“For this purpose we use the so-called CIRCONFLEX technology, developed by Philips, which enables the transfer of circuits that are processed on standard silicon wafers to a flexible polyimide foil. The problem is that the foil is so thin that it is hard to handle, it cracks easily. So now we are working on chips that are only flexible where they need to be, while the rest is made of rigid silicon.”
Ben dedicated the first year of his research to co-developing this novel technology, called F2R – Flexible to Rigid. He also made demonstrators mounted inside a 600 micrometers diameter tube. 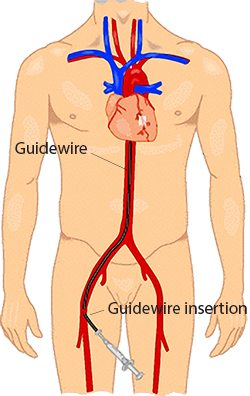 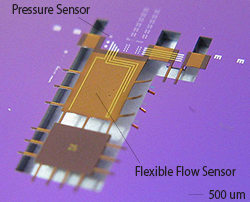 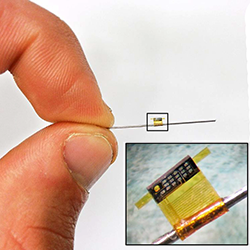