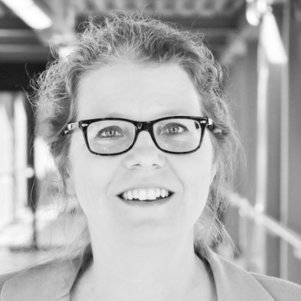 Visit my website for details of my on-going activities.

Martha Larson works in the area of multimedia retrieval and recommendation with a focus on speech, language and meaning. She is an expert in multimedia analysis techniques that make use of automatic speech recognition and audio analysis. Her more recent work involves multimedia in social networks and human computation, including crowdsourcing.

Within the Multimedia Computing Group she sets her focus on algorithms that are designed to meet user information needs that go beyond topic. Such aspects are often deeply hidden, and can be revealed only by analyzing large quantities of data, aided by crowdsourcing. Examples of her work on such orthogonal-to-topic aspects of multimedia include: novel highlights in spoken content, user intent in multimedia search, affective multimedia indexing, user trust, and context-aware recommender systems.

Martha Larson started working in the area of speech recognition and multimedia retrieval in 2000 and her formative experiences included time spent as a visiting researcher at the Technical Informatics department at the University of Duisburg and as an intern at IBM Watson Research Center. Before joining Delft University of Technology, she researched and lectured in the area of audio-visual retrieval at Fraunhofer IAIS and at the University of Amsterdam. She has participated as both researcher and research coordinator in a number of projects including the EU-projects CrowdRec, CUbRIK, PetaMedia, MultiMatch, SHARE. Her most influential early work was focused on developing vocabulary-independent speech-based access for large radio archives within a industry project during her time at Fraunhofer.

Martha Larson holds a MA and PhD in theoretical linguistics from Cornell University and a BS in Mathematics (concentration in Electrical Engineering) from the University of Wisconsin. She is a member of Tau Beta Pi Engineering Honor Society.