Updates on the VeloX

Design Presentation Human Power Team
The past month, the Human Power Team went through one of its biggest transitions of the year. We are proud to say we finally entered the production phase! Keep on reading if you want to find out everything about the new VeloX! Besides the new design, we also shared a new story for our goal this year.

At our Design Presentation, our audience got to meet Sarah. Sarah is a cheetah, the fastest animal on land. But Sarah isn’t a regular cheetah, she is the fastest one ever recorded. She can run up to 120 km/h, almost exactly the world record we're aiming to break. Sarah is an inspiration to us: after years of evolution, she is the fastest animal on land that nature brought to the world. Until September. In September, we, the Human Power Team, will travel to Battle Mountain in Nevada, where the WHPSC will be held. We will do our record attempt to dethrone Sarah as the fastest land animal ever.

Drivetrain
In order to be able to cycle at 130 km/h, a large gear ratio is needed. At those speeds, the wheels will rotate approximately 14 times per pedal stroke, and to realize this, a large gear ratio has to be implemented. In the VeloX 6, it was achieved by splitting the transmission up in two parts, but a large chainring with 100 teeth was still needed.

The transmission in the VeloX 7 is also split into two smaller transmissions, but the gear ratio of the second smaller transmission has become a bit larger. This results in a smaller chainring (44 teeth), but more importantly: the removal of one sprocket. For stability reasons, it was needed to align the chain parallel to the fork and adding the sprocket was the only option to make that happen. Since this sprocket is obsolete in the new design, the efficiency of the drivetrain in the VeloX 7 is increased.

Aerodynamics
In the aerodynamics department of HPT 7, there are almost as may applied physics students as aerospace students. This may sound weird, because what does physics have to do with aerodynamics? Well, it actually worked out pretty well! This year, the department made many improvements in the aerodynamics compared to previous year. For example, the backwheelfairing, an external cover at the backwheel, is now fully integrated into the body of the VeloX 7, which makes it even more aerodynamic. About 80% of the airflow is now laminar and there is no disturbance in the airflow on the tail, even with crosswind! To create these improvements, we made a lot of different models and kept on improving them little by little. For the final product, we've created over 100 models. What I like about this, is that I am never finished. There is always something to improve and this results in that every hour invested is worth it. Luckily, others feel the same too!

Structure
Building an extremely fast bike isn’t easy. Of course we need an aerodynamic shell and a good drivetrain to optimize the power of the athlete, but what holds it all together? That’s right, the structure!

The structure is like the skeleton of the bike, it is connected with everything and holds everything in place, but not only that, it is also the reason the VeloX so stable and secure. The structure provides the cyclist safety.

This year, we looked at the good parts of the old VeloX’s and improved them. An good example is the half split front frame. The split creates an optimal positioning of the drivetrain and the single beams make sure the new front frame is stronger and more stable. Overall, the structure has been slimmed down to create a lighter and faster VeloX!

User Interface
A new area we are working on this year, is a live feedback system. We believe that by coaching the athlete during the race, we can let them perform better. We do this by measuring different properties of the athletes during the race, like the heart rate, body temperature and oxygen intake. Combined with the data of the improved power curve, we can create better timing for the athlete to use a certain amount of power at a certain time. With this we can, sometimes against the intuition of the athlete, deliver better performances. We hope this coaching will help the athlete perform optimally during the race. 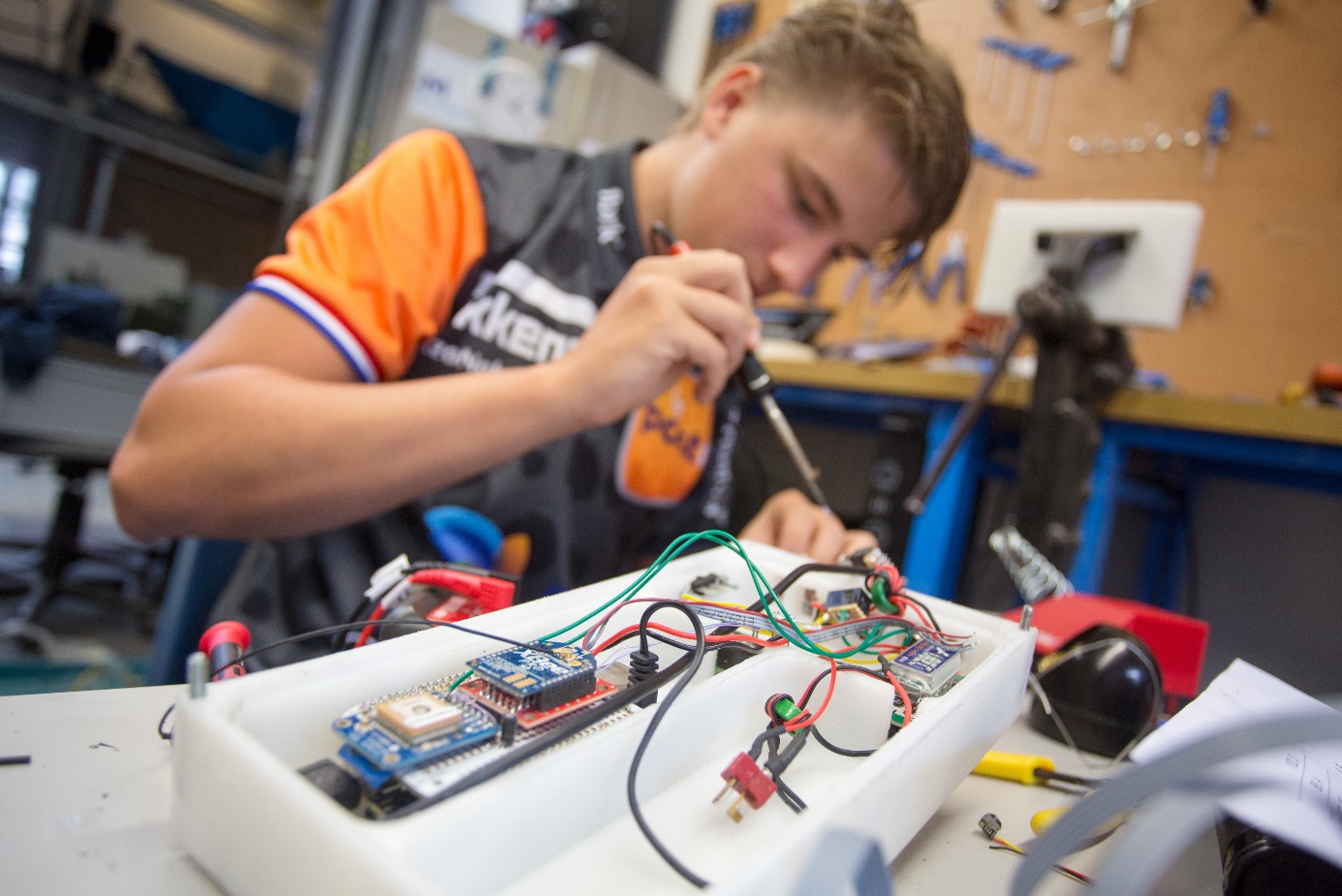