This year we will do something which has never been done before by a student team. We will build a seaworthy solar boat that accommodates three passengers. As we go offshore, we need to build a huge boat which requires a power source. As we are the TU Delft Solar Boat Team, we make use of solar panels.

The solar panels form a deck which is vital for the boat. The solar deck acts as the power source of the ship, by converting the solar energy into electrical energy. It will also make the public realize that this is not a regular boat, it is a solar boat. All the solar panels are placed on top of the deck. Thus, the public will see a giant deck of solar panels. But how do we convert as much solar energy as possible to power?

We do this with the help of MPPTs. The maximum power point trackers are used to ensure that the maximal amount of power is delivered by the solar panels. The voltage-current characteristic of a solar panel is depicted as the red line in figure 8. The electrical power can be found by multiplying the voltage with the current, P = U  I (the blue line of figure 8). The figure shows that at the voltage VM the power reaches a maximum, this is called the maximum power point (MPP). At the MPP the highest amount of power (for constant solar intensity) is generated by the solar panels. The MPPT ensure that we operate at the correct voltage. 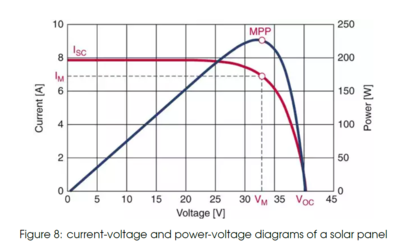