In this course, students create their own pieces of art; a Sci-Fi narrative. From autonomous robots, via chip implants to deep brain stimulation – the boundaries between human and machine seem to fade. It confronts us with all kinds of challenges and questions, about current as well as future issues.

Throughout the course, students develop a piece of art in which you focus upon one of the questions at stake. In what I call ‘the Laboratory of Science Fiction’, students experiment with the possibilities of science, making use of a variety of sources and methods.

Laboratory of Science Fiction is part of the Awareness & Culture specialization. 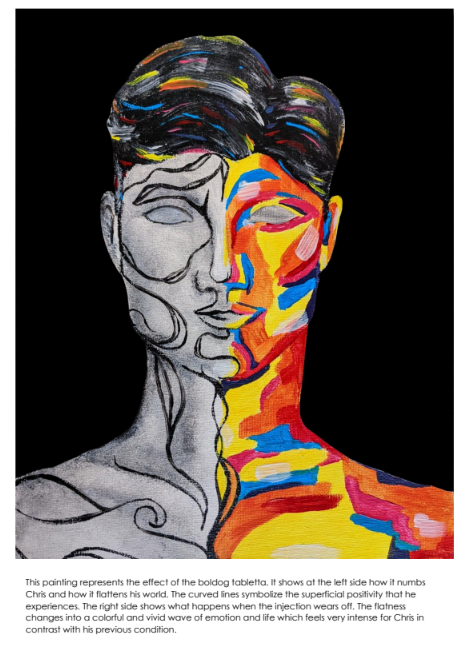 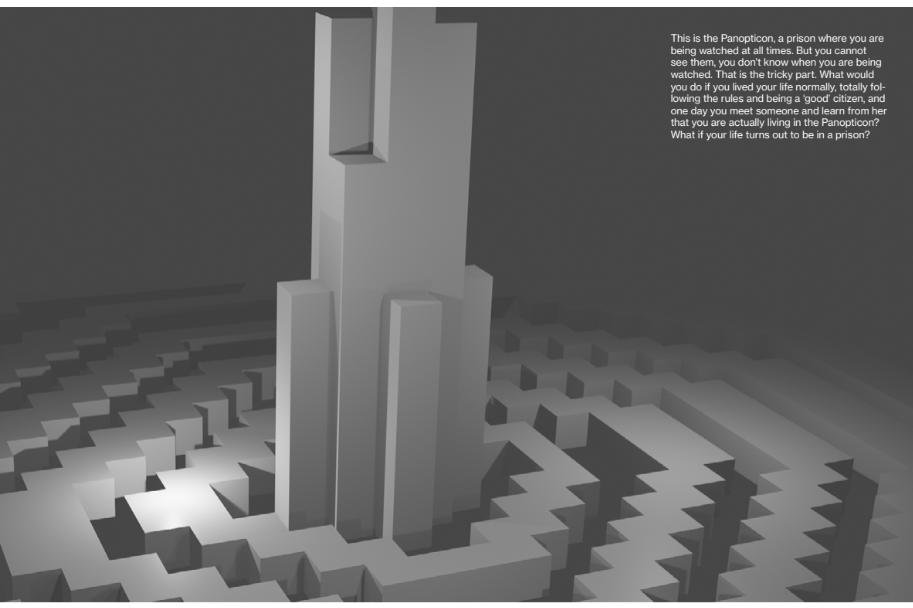 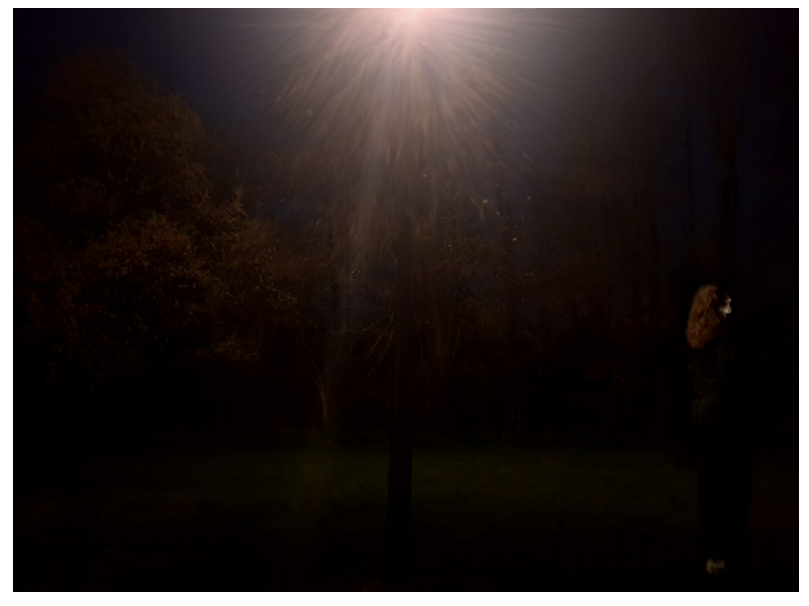 About the visualisation: I chose to use photography and photo editing software (GIMP) for my visualisation. In the image, we see a girl turn away from the source of light to gaze up into the dark. Firstly, this connects to my story in the sense that Wanderer Wallace tells Xia Lin she has to turn her back on the Complete Portrayal, something that has brought humanity so much light, in order to see the truth. Secondly, the image is a reflection of my own studies and the new insights they’ve given me. A few of the subjects I’ve been following the past few weeks were related to microscopy. I’ve learned that in order to optimally image a sample, it is often more important to limit the amount of light instead of to maximise it. As much sense as this makes in terms of physics, it is somehow still contradictory to me. For me personally, this is because we equate light with information; however, we can only discern this information if the light is not overwhelming. Worst case scenario, the information is even lost due to an excess of light. This idea is exactly reflected in the physical phenomenon of photobleaching, which Wallace refers to when he explains to Xia Lin how, according to him, it is possible that humanity lost its connection to the scientific mindset. Finally, the initial impression of the picture is gloomy and almost scarily dark, which is only strengthened by the presence of the light. This represent the fear and apprehension that comes with progress and discovering the unknown. I don’t believe this turning away from the light, from the known, is as self-evident as it may seem when considering the incredible scientific process of the past decades. In spite of this, many men and women continue to do so in all different fields, all over the world. Ultimately, all technological, cultural, and social progress is simply a celebration of their curiosity and their bravery.

About the visualisation: I found it hard to represent something non-abstract in my story, as the main theme is rather abstract: a brain that is somehow limited due to a chip. I decided to try and visualize exactly that, although it is so abstract. I really wanted to try to use Blender, not just because I liked the challenge of using this new software but also because I really liked the shapes it has. I have tried to visualize this concept by having a structure in the middle that represents your consciousness: it is the most complicated structure of all, but still has some structure, because it has been figured out in the future. The consciousness is surrounded by shapes that form a wall, but I have tried to make the wall look non-rigid and with holes, because in the story it is also described that people are still forming or editing the boundaries and you are able to go beyond these boundaries, by just shutting down the chip for example. The last thing I tried to do, but in which I didn't succeed ( I'll blame it on the software :)) is to let the light in the picture come out of the consciousness, but I didn't get that to work out in the way I wanted. I hope you like it! 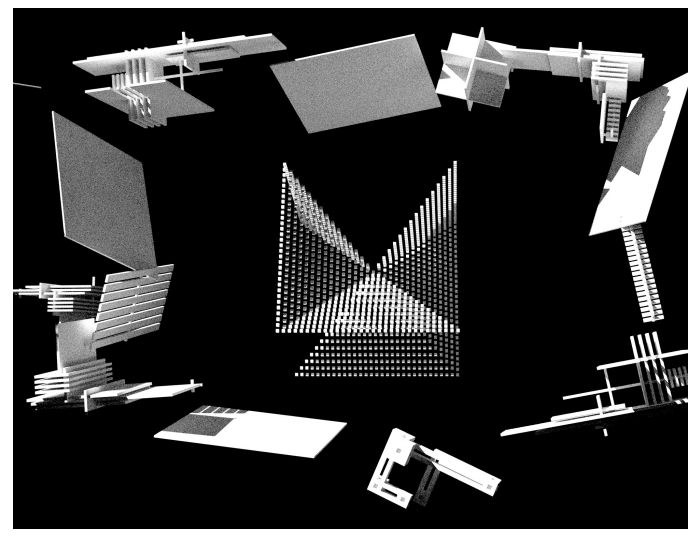 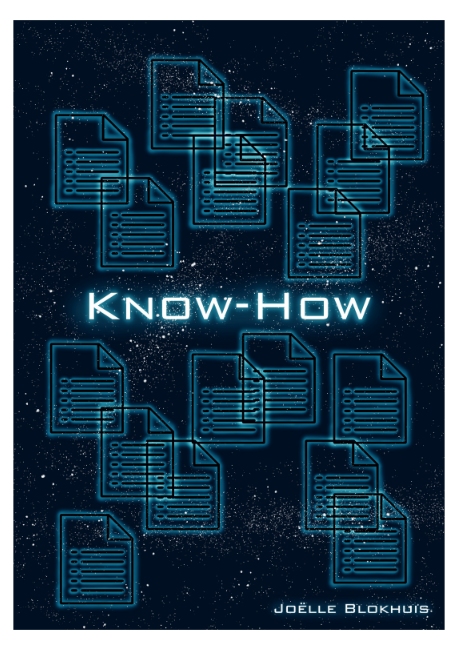 About the visualisation: There are so many ways this drawing reflects my writing and I will elaborate on afew of those.First of all, the drawing contains a cloud that transforms into cubes, but stillmakes a whole cloud as the two work together and form the shape. In the sameway, the machines and humans in my story are part of the same world. They dohave some of the same ambitions or as one would say ‘dreams’, therefore acloud.The bee (natural, living, depicts the non-machine part) in this drawing fliesthrough the cube-part into the cloud and out again, just like our characters do inthe story. We start ‘zoomed out’ and end that way too. The entanglementbetween nature (or humans) and machines is depicted by the rigid shapes insidethe soft cloudy part and the soft flow of the cloud around the cubes. And as awink to the reader a bee as it is a love story (the bees and the birds).Last thing I will reflect on is the non-blurring of machine-nature, the machines inthis drawing are represented as separate entities, no open shapes ortransformations, as in the story where the machines are also separate fromhumans/nature. They do form a world together but are definitely different partsand as we get to know some machines, we know that some don’t even interactwith humans anymore.

Leadership in a complex world