In 2001 Marco graduated as an interaction designer at the faculty of Art, Media and Technology at the Utrecht School of the Arts. Hereafter, he conducted his PhD thesis at Industrial Design Engineering, Delft University of Technology, where he focussed on the experience of engagement and the product, expertise and task factors that influence it. In 2007 Marco started as an assistant professor in the Designing Quality in Interaction group at Eindhoven University of Technology where he focussed on engagement and aesthetics in product service systems. In 2011, Marco returned to Delft and, is now associate professor in Interaction Design at Human Information and Communication Design. Marco’s research focuses on interaction aesthetics with a specific focus on new interaction styles and paradigms made possible by new interactive technologies.

Currently, Marco is developing knowledge on interaction aesthetics, working on new interactive experience assessment tools within the CRISP project Interactive Play Environments and coordinates the design innovation for healthcare initiative for the Princess Maxima Centre for Child Oncology. He organized several workshops (NEMO ‘Science Live’, Amsterdam 2011; Ambient Intelligence conference, Pisa, 2012) and developed three experience assessment apps, in cooperation with the creative industry. Marco has published in the International Journal of Design and Design Research Journal and several design-related conferences. In education Marco is involved in the Minor Interactive Environments and Integrated Technology Design, together with Aadjan van der Helm, and is involved in the honours program module on Interaction Aesthetics, together with Gert Pasman.

Research interests include, but are not limited to:

Making interactive prototypes in the early stages of the design process.

Encouraging social interaction of isolated children in the hospital.

Helping parents of hospitalized children to take better care of themselves.

Stimulate physical and social activity for oncology patients between 6 and 12 years old. 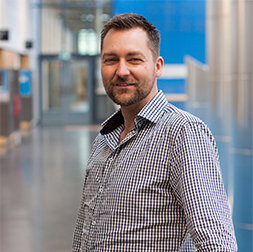