Overview of the ClimProp project

The growth in air transportation will inevitably lead to an increase in aircraft combustion emissions and the consequent climate impact. Overall, CO2 emission shares less than 50% of the total aviation radiative forcing if non-CO2 effects from NOx, water vapor, direct aerosol, contrails and the induced cirrus (contrail-cirrus) are included. An effective mitigation strategy is expected to address both CO2 and non-CO2 effects of aviation. The future aircraft engine technologies, including ultra-efficient engine cycle, novel engine cycles, and engines using alternative energy sources will play essential roles.

The ClimProp project aims at understanding the sensitivity of the global climate change to future propulsion technologies attributed to engine cycles, designs and energy sources by combining both the CO2 and non-CO2 effects, thereby providing an astute insight for the aviation community to choose the most climate-friendly technology.

The earlier research shows that novel cycles like intercooling, inter-stage turbine burner engines can have high potential in reducing the NOx emissions. Over the course of the project, details regarding the performance and emissions of these novel cycles will be understood and the consequent climate impact will be assessed.

The climate model developed in this project describes the sensitivity of climate change to engine design variables, and allows this model to be integrated to the current engine design framework for climate optimized engine design. 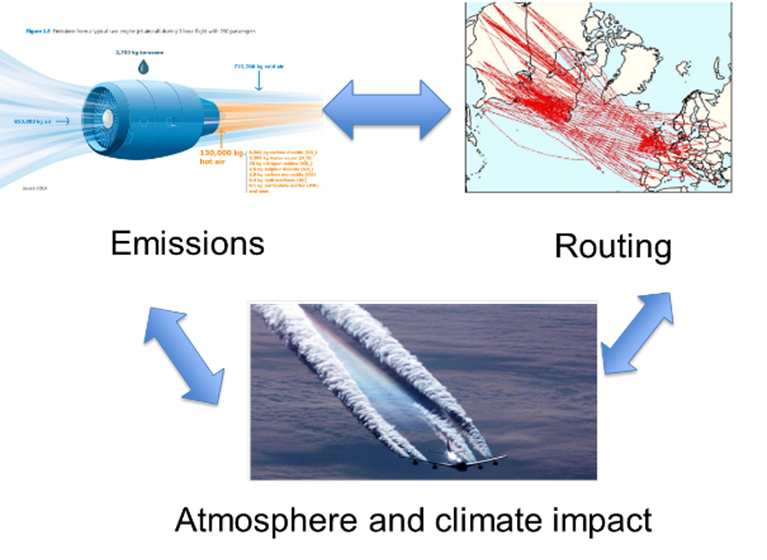 The user committee of ClimProp aims to involve relevant stakeholders to steer the R&D activities of the project. For this reason, it comprises a variety of members like airlines, manufacturers, and academy, as described below.

Abstract: Aviation is responsible for approximately 5% of global warming and is expected to increase substantially in the future. Given the continuing expansion of air traffic, mitigation of aviation’s climate impact becomes challenging but imperative. Among various mitigation options, hybrid-electric aircraft (HEA) have drawn intensive attention due to their considerable potential in reducing greenhouse gas emissions (e.g., CO2). However, the non-CO2 effects (especially contrails) of HEA on climate change are more challenging to assess. As the first step to understanding the climate impact of HEA, this research investigates the effects on the formation of persistent contrails when flying with HEA. The simulation is performed using an Earth System Model (EMAC) coupled with a submodel (CONTRAIL), where the contrail formation criterion, the Schmidt–Appleman criterion (SAC), is adapted to globally estimate changes in the potential contrail coverage (PCC). We compared the HEA to conventional (reference) aircraft with the same characteristics, except for the propulsion system. The analysis showed that the temperature threshold of contrail formation for HEA is lower; therefore, conventional reference aircraft can form contrails at lower flight altitudes, whereas the HEA does not. For a given flight altitude, with a small fraction of electric power in use (less than 30%), the potential contrail coverage remained nearly unchanged. As the electric power fraction increased, the reduction in contrail formation was mainly observed in the mid-latitudes (30° N and 40° S) or tropical regions and was very much localized with a maximum value of about 40% locally. The analysis of seasonal effects showed that in non-summer, the reduction in contrail formation using electric power was more pronounced at lower flight altitudes, whereas in summer the changes in PCC were nearly constant with respect to altitude.

Society is going through transformations at a rate that is unprecedented in human history. One such transformation is the energy transition, which will affect almost every facet of our society. Gas turbine engines are state of the art machines, a backbone of modern society, and used in various applications, right from power generation to propelling aircraft and ships. This paper reviews the possibilities offered by the Inter-stage Turbine Burner (ITB) configuration for both aviation and power generation with a view on sustainability and fuel flexibility.

First, the thermodynamic characteristics of a Brayton-Joule cycle with ITB is elaborated, followed by discussions on the design and the off-design performance characteristics of such a gas turbine architectural variation. Finally, the viability of ITB architecture in reducing emissions and enabling "Energy Mix" in aviation is elaborated. The paper concludes with an outlook on the technological readiness ladder that the engineering community will have to address in the future.

Aircraft propulsion system plays an essential role in reducing the aviation’s environmental impact. In the past, the cycle efficiency of engine has improved significantly via increasing engine pressure ratio, operating temperature and bypass ratio. The increase in engine efficiency reduces fuel consumption, hence the related greenhouse gas emissions. However, the overall climate footprint of aircraft engine technology remains ambiguous, as more than 50% of the aviation’s climate impact is caused by non-CO2 effects like NOx, H2O, contrails, etc. The NWO funded VENI research project “Fly Green: Climate impact of future Propulsion system (ClimProp)” aims to develop the first climate propulsion model which can be used: 1) to evaluate the climate footprint of engine technological advancement represented by engine design parameters and the effects of potential alternative energy sources in future; 2) to be implemented in the existing engine design framework to enable the climate optimized engine design in future considering potential trade-offs between CO2 and non-CO2 effects. This paper presents an overview of the “ClimProp” concept.