Rushabh Chheda is a man who has a way with words. For one, he was the winner of the TEDxDelft 2019 Award for his talk at the event. For another, he has convinced audiences worldwide of the merits of UniBrick, his idea to solve two major problems faced by humanity in a single stroke – affordable housing and plastic waste. “Interlocking bricks made from discarded plastic that can be used to assemble houses without the need for cement or skilled labor. You can think of it as a LEGO brick”, he says proudly, “Just as tough but bigger and cheaper so that anybody can afford it!” He aims to better the lives of people in slums the world over through his product. An alumnus of the Faculty of Architecture and founder of the startup Conscious Designs in Delft, he gladly agrees to meet with me in the TU Delft library to tell me all about it.

Having lived in the sprawling city of Mumbai for 24 years, Rushabh says he saw more than his fair share of people without proper homes and mountains of plastic waste. A senior from his days as a bachelor student inspired him to come to TU Delft and pursue architecture, and that he did, turning down offers and scholarships from some American universities. He says the excellent quality of education at TU Delft for his field and the support offered to young entrepreneurs were the deciding factors for his decision. 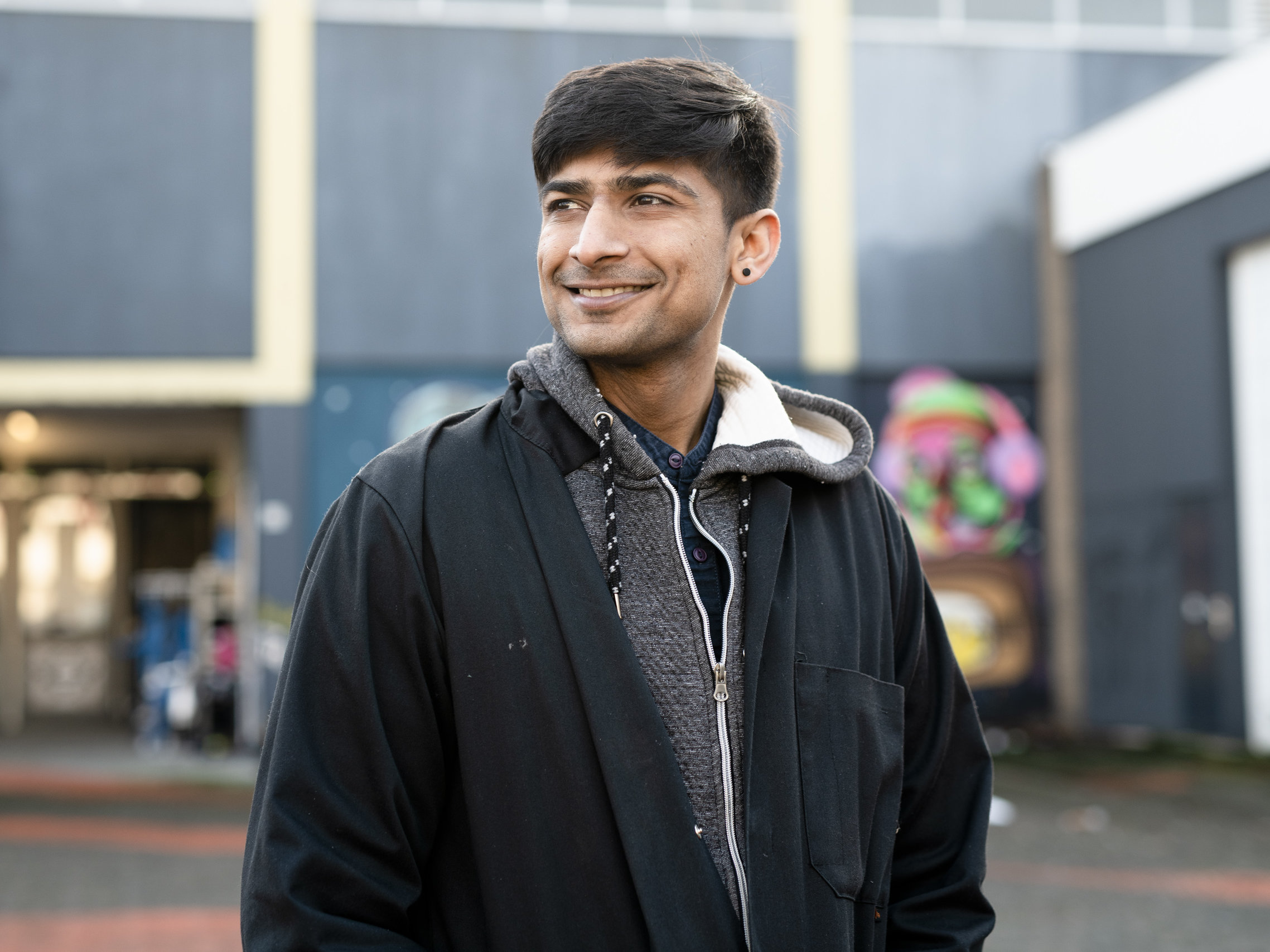 Intrigued, I inquire about the details of his project. Rushabh already has a presentation ready on his laptop to show me. He says the building industry causes 40% of all carbon emissions and that cement buildings don’t last long enough to justify their environmental impact. So as part of his thesis, he travelled to the slums of Bandung, Indonesia for 1 month to assess the housing needs of people living near a textile factory. He noticed that there was a severe shortage of space, and that residents were building their houses on their own to save money, but as a result, the buildings were not well made. The slum also faced the problem of accumulating plastic despite local attempts at recycling. “It reminded me a lot of Mumbai, with its similar challenges”, Rushabh muses, “and it was only going to get worse due to urbanization and population growth”. 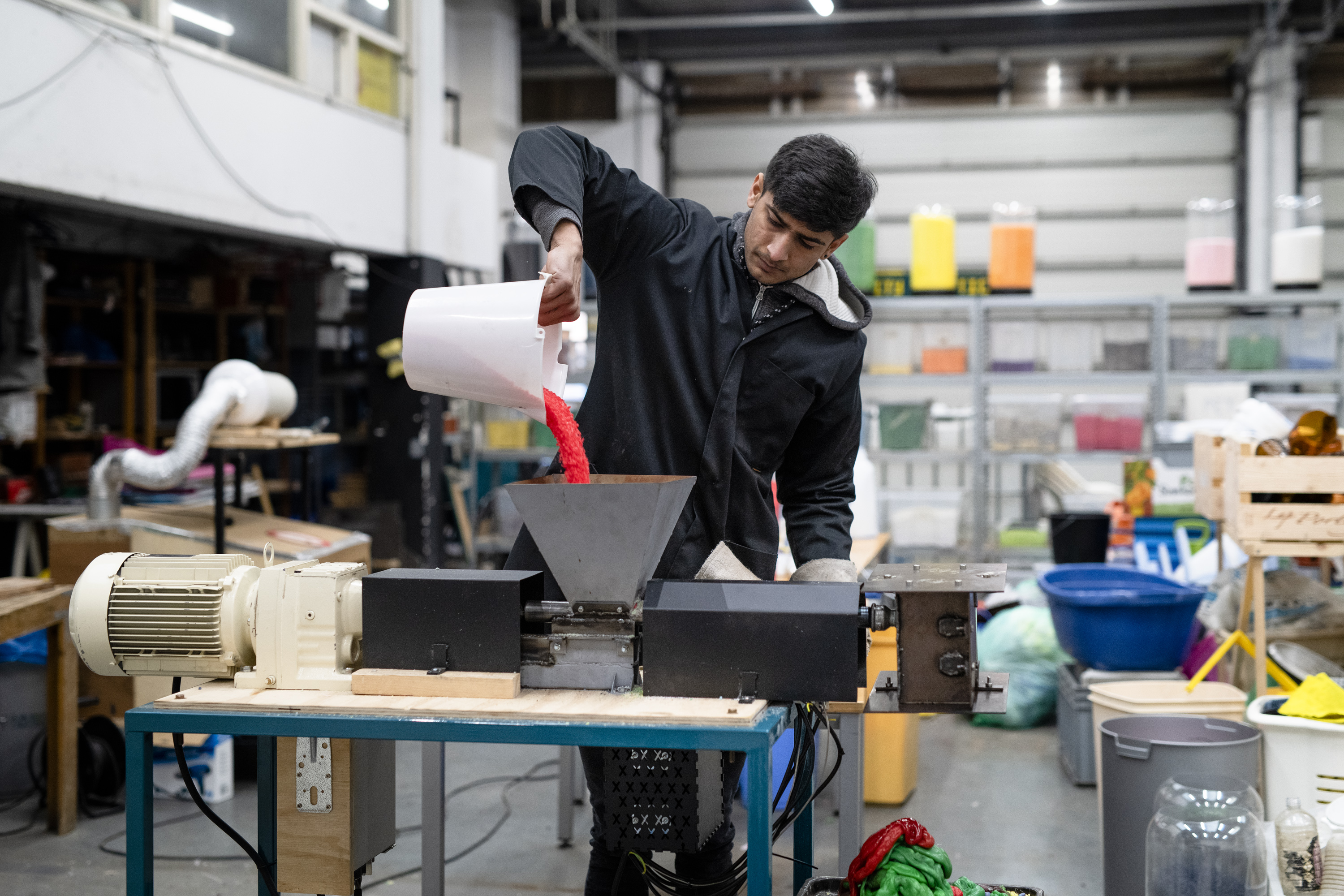 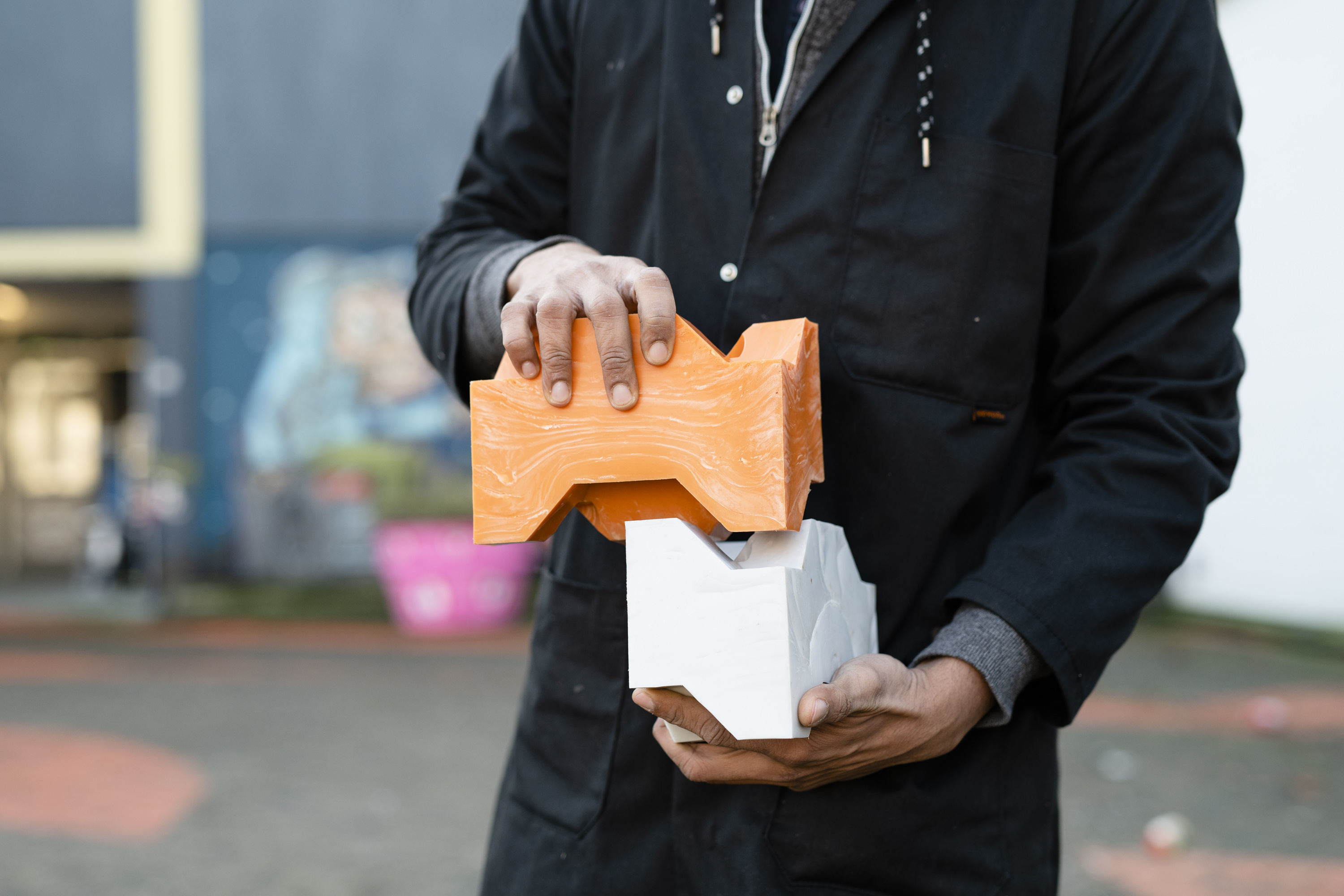 According to Rushabh, a circular economy is what is needed to solve the problem, instead of the prevalent linear economy. So as his graduation project, he set out to put the abundantly available plastic waste to good use instead of having it end up in landfills or rivers or be burned. He shows me a diagram of his brainchild and explains, “First, the plastic is collected and sorted into polypropylene (PP), polyethylene (PE) and polyethylene terephthalate (PET), the three most common kinds of plastic waste. It is then granulated, mixed with crushed glass, sand or fly ash, and injection molded into a brick”. He brings up an image of the final product and tells me it’s actually stronger than cement and also quite heat insulating. He plans to make different shapes of bricks for different parts of a house like windows, corners, walls and doors that seamlessly fit into each other like a jigsaw.

Almost immediately, I see some problems with this approach and ask him how everything is fastened together and how the house is ventilated. Rushabh smiles and tells me there are slots in the bricks to insert rods and supporting members, eliminating the need for cement and providing a modular design. He adds that a double roof system with a slit to let air in is used to cool the house and for rainwater harvesting. “However, there are still many tests to be done to understand and optimize all aspects of the material to make it safe for use in housing constructions”, he admits.

After graduating his MSc with this idea, Rushabh has taken it forward and created a product called ‘UniBrick’ under a company called Conscious Designs. The startup’s goals are to design solutions for the problems faced by the masses, unlike most architecture firms that only cater to clients who have money. Rushabh claims building a house of 50 m2 with his method would cost only 12000 euros including wiring and plumbing, which is considerably cheaper than most alternatives. “It’s also faster to construct, sustainable and provides employment”, he says. When I ask what his next steps are, Rushabh says he’s looking into doing extensive material research, finding the right investors and working on his business plan to make the houses more affordable and accessible for his future customers. He also tells me he’s not alone in this approach and that he has competition from Conceptos Plasticos and PolyCare. However, Rushabh says he’s eyeing the markets in Nigeria, Malawi, Mexico, India and Indonesia because these places are in dire need of proper housing and plastic cleanup. As there is much work to be done before the bricks are ready for housing construction, Rushabh is using his current brick prototype to make products for the Dutch market like temporary structures for festivals, street and urban furniture. He also has the support of the startup incubator World Startup Factory, based in the Hague, which is helping him take his idea off the ground.

“As you can imagine, I spend nearly all my waking hours working for the company”, he says with a wry smile. He confesses that learning the business and legal aspects on the fly was difficult, especially since he’s in a different country and his background is in architecture. “It was easy enough convincing academics of the merits of my idea, but with my parents, it was another matter entirely”, he says gravely, adding that they needed a lot of convincing before they came around to share his views and support him.

I notice the skateboard he brought with him and ask about his hobbies. “I really love travelling and have visited over 30 countries!” he says proudly, “I take the time to visit museums and techno music concerts wherever I go and am learning Dutch and surfing”. Apart from that, he says he was an active member of STYLOS, the student body of the architecture faculty of TU Delft.

Listening to Rushabh’s fascinating tale, I hardly notice the time fly by. I thank him and pack my things when my eye lands on the miniature prototypes of the bricks he had brought with him. As I twiddle them between my fingers, I can’t help but think of a world built from LEGOs and cities taken straight out of Minecraft. An amusing thought, to be sure, but one which forebodes of challenging times to come. 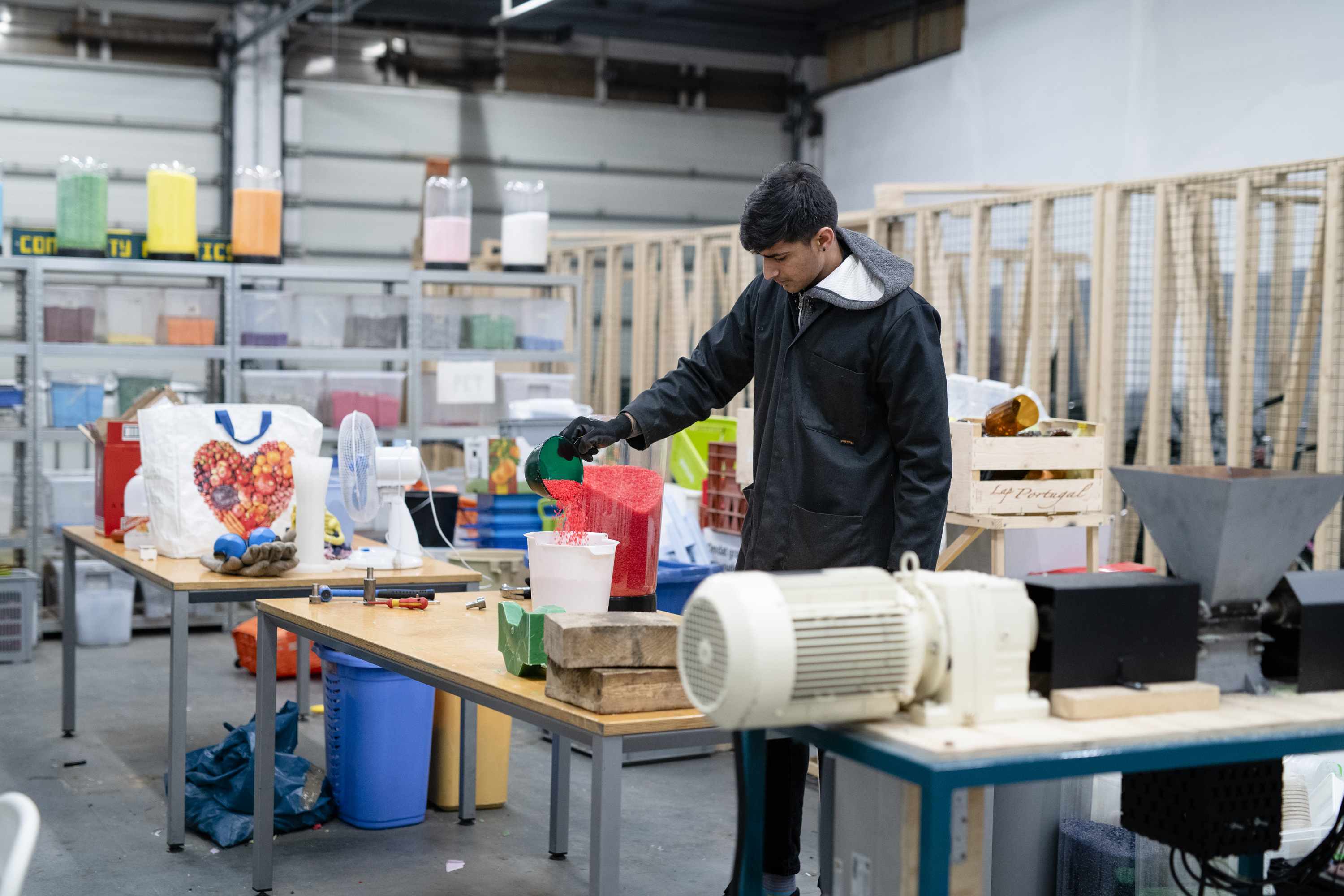