I consider myself as a transdisciplinary human, skilled at uncovering and realising creative opportunities in diverse fields of study, enabling me to cross boundaries and link people and city. At TU Delft’s Faculty of Architecture, alongside city stakeholders, international experts and young innovators I define spatial solutions that are vital for the future wellbeing of people, cities in an era of climate emergency and spatial inequality. Complimenting those city ambitions at TU Delft, I hold the position of ‘Professor of Architecture’ at the Grenfell-Baines Institute of Architecture in the United Kingdom.

My doctoral thesis, the first to be awarded at the Manchester School of Architecture, proposed a spatially creative design method for the sustainable growth of cities. Expertise evolving to meet societal urban challenges through a first of a kind participatory and public space creative live labs that I lead across Europe. My aim is to bridge together the culturally creative and technical industries for the advancement of cities, public space and societal value. Ensuring that city aspirations for the environment are amplified and nurtured by the families who will live them.

Craig’s doctoral thesis, the first to be awarded at the Manchester School of Architecture, proposed an urban context and climate dependent spatial methodology to support the sustainable design and planning of cities. Expertise evolving to meet societal challenges with onsite techniques that ‘bridge’ the engagement gap between the non-specialist and specialist. Ensuring that community aspirations are amplified and radical urban designs are created, trusted and nurtured by the families who will live them.

How can societal challenges be spatially solved within the public realm to support citizens and their communities?

In an era of climate change, what creative steps should a city and its communities take to become zero carbon?

Which creative approaches can help define the future direction of art, architecture and public space within the city?

“Sustainability needs people who bring qualitative and quantitative together and reveal the latent potential of our cities and citizens.”

As a boy, my passion, purpose, was to reimagine the world surrounding me through drawing. As an art student, later appreciating the shared joy creating can give to those around me. Reimaging the built environment around us, society, followed. Without realising it, I became a public spatial thinker and creator, at that same moment guiding the technological and future urban vision of a high-ranked institution in the United Kingdom. That synergy of expertise taking me onto Delft to develop methods that spatially, socially and technologically reimagine public space across Europe. In Belfast, Dubrovnik, Izmir, Menorca, Sevilla, Roeselare, Preston, Nicosia, and in The Netherlands (Amsterdam, Delft, Amersfoort, Elburg, Zutphen and planned for March 2022, Amsterdam’s Indische Buurt). Those experiences being the foundation of the City-zen roadshow, an public space creative live lab, recently described by the European Commission as a success story, innovative and first-of-a-kind for the impact made in the heart of communities. 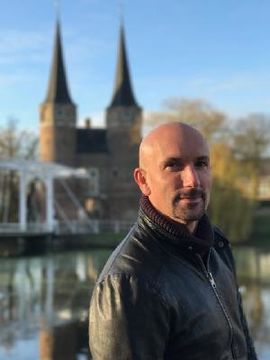