Researcher Dr. Nava Tintarev from the EEMCS Faculty (Electrical Engineering, Mathematics and Computer Science) has won the Mekel Prize 2019 for the most socially responsible innovation at TU Delft: on decision models that break through filter bubbles. The prize was awarded on 21 November during the Van Hasselt Lecture in the Oude Kerk Delft. Tintarev was given a statue of Professor Jan Mekel and €1.500,- to spend on further research.

Decision-making at individual, business, and societal levels is influenced by online content. Filtering and ranking algorithms are used to support these decisions. However, the design of many of these systems may lead to information silos and filter bubbles, for example in the media. Filter bubbles potentially undermine our democracy, but there are also technologies that might help to overcome them. 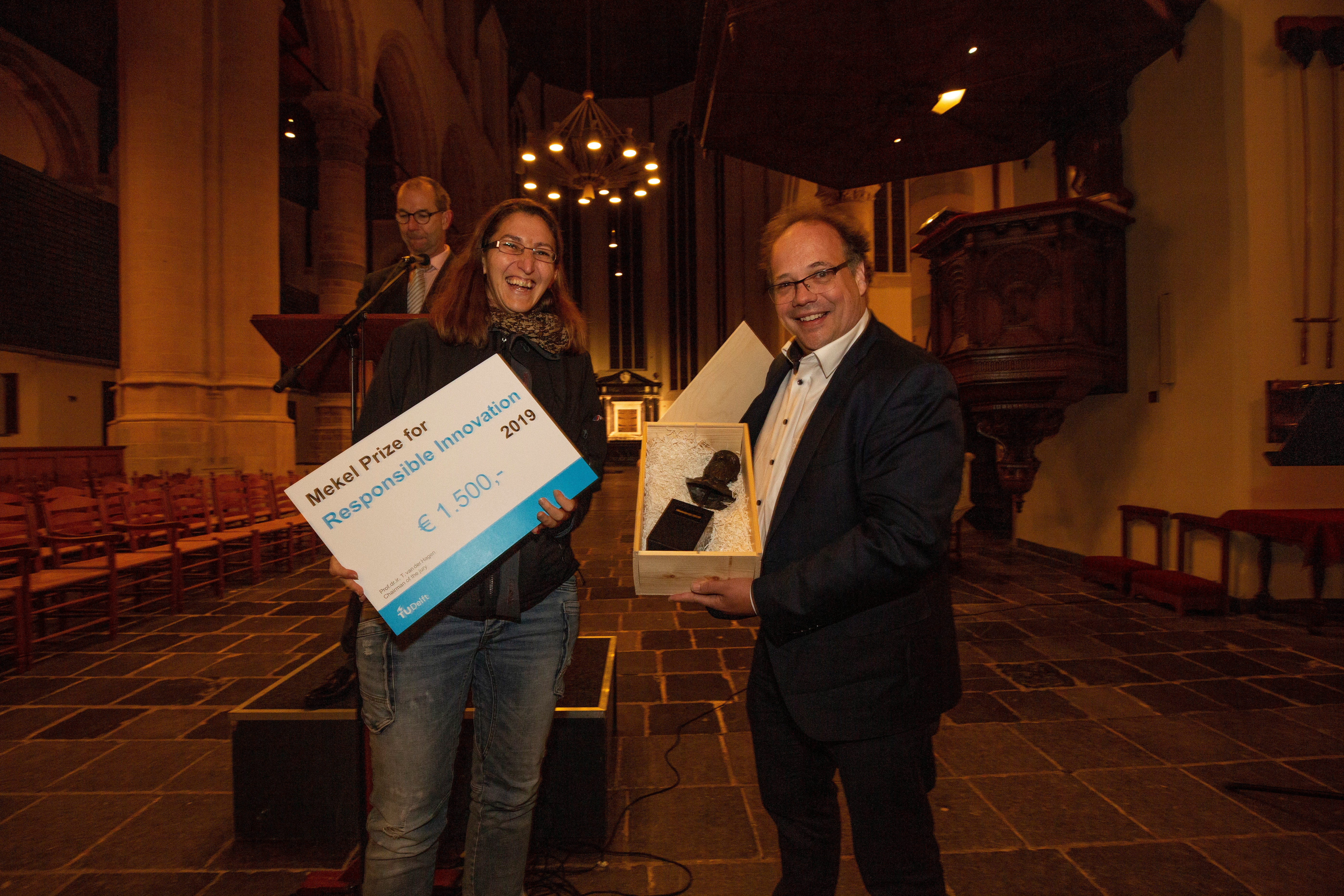 Algorithms
Tintarev’s project is aimed at devising algorithms that helps to break through filter bubbles. Instead, it tries to present people with a diversity of viewpoints. One of the solutions Tintarev came up with is the design of an interface that helps to present different viewpoints better. She has developed this technically innovative tool in close dialogue with the media industry.

Critical thinking
The project scored well on all the criteria of  the jury. According to the jury chaired by Rector Maginficus Tim van der Hagen: ‘It addresses a societal challenge, that we might all recognise. If on social media like Facebook we click on news stories that we like, we are more likely to get similar stories in the future. And we are less likely to get news that contradicts our opinions and beliefs. Social media thus tend to reinforce our opinions and to reduce opposing voices. Tintarev’s innovation not just aims at presenting the news better, but contributes to critical thinking as well.’

For furthermore information
About the project:

About the Mekel Prize:

The Mekel Prize for Responsible Innovation 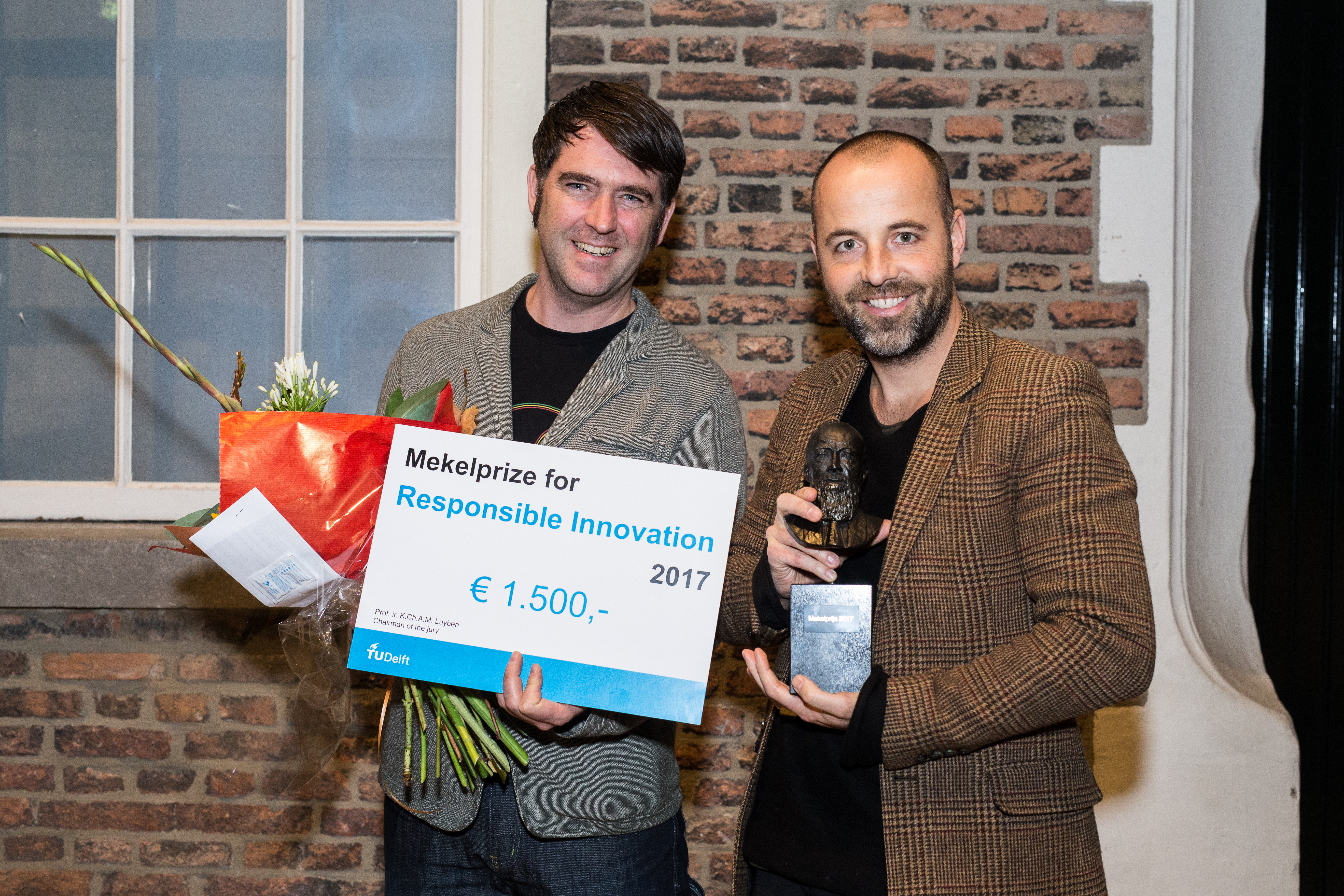 Picture by Jee Yak Khaw; Rens Kortmann (on the left) together with theatrical producer Arlon Luijten (on the right)

Researcher Dr. ir. Rens Kortmann from the Faculty of Technology, Policy and Management (TPM) received the Mekel Prize 2017 for the most socially responsible innovation: Parsifal Playing Fields.
The prize was awarded on 23 November during the Van Hasselt lecture in Museum Prinsenhof. Kortmann was given a statue of Professor Jan Mekel and € 1.500,- euro to spent on further research.

Parsifal Playing Fields is a combination of a serious game and an artistic performance based on Wagner’s Parsifal. Policy games have proven to be more effective than traditional workshops to tackle the Grand Challenges for our society, such as climate change and social exclusion. These are complex problems that require a multitude of different stakeholders to engage and cooperate in order to solve them. Elements from the theatre arts may further enhance their effectiveness by intensifying the embodied experiences of game players. Playing the VR (virtual reality) game induces so called embodied experiences; combining cognitive, affective, and physical experiences. Through the game its players are confronted with their own callousness and selfishness, thus showing how difficult it is to hold on to pro-social values like compassion and collaboration. As a result, the often profoundly affected players reconsidered their values and resolved to improve their behaviour.

This project scored well on all the criteria of the Jury. It addresses a societal challenge, sustainable cities, and does so in a way that empowers many to contribute to this goal. Its design is based on the aim to achieve and stimulate social values while taking into account risks. And the design process was inclusive and transparent. “The jury was particularly impressed by the wide spectrum of possible applications of this innovation as a way to engage citizens in the grand challenges. It would also be interesting to use it in the teaching at TU Delft” says Karel Luyben, chairman of the jury.

About the Mekel Prize

Researchers Jan Carel Diehl and Johan Molenbroek of the IDE faculty have been awarded the Mekel Prize for the most socially responsible innovation of 2015. The second prize was awarded to A+BE researcher Ben Bronsema. The prizes were awarded on 5 May during the annual Van Hasselt lecture in the Oude Kerk in Delft.

Diehl and Molenbroek received a small statue of Professor Jan Mekel and 1,500 euros for their research into gender sensitive community sanitation centres. Bronsema received 750 euros for his research into natural air conditioning.

Diehl and Molenbroek's research seeks to offer a solution to developing countries, where there is little or no access to safe and affordable sanitation facilities. They have therefore developed a community sanitation centre for slum inhabitants. The jury were especially impressed with the fact that the design included special sanitation services for women. The Santitation centre was developed using a human-centred design approach, involving the local population in the process.

The jury was chaired by Rector Magnificus Karel Luyben. The jury selected the winners based on a number of criteria,  including the degree to which the research contributes to solving a challenging problem in society and the degree to which social values have been incorporated in the development of the innovative idea.

About the Mekel Prize

The Mekel Prize is awarded annually to TU Delft students and staff. With this prize, the university wishes to increase awareness of the ethical aspects of technological developments and emphasise the role of researchers and designers  in incorporating these aspects.  As of this year, the Mekel Prize will be awarded to the most responsible innovation at the TU Delft. Over the past few years, responsible innovation has become a central concern in innovation policy and the funding of R&D programs.

Other news items about the award: TU Delta