Important functions of eukaryotic cells, like motility or division, depend sensitively on cytoskeletal mechanics and organization.  In particular, microtubules (MTs) are dynamic polymers that can move and position organelles such as their Microtubule-Organizing Center (MTOC), by pushing, pulling or sliding. For example, during migration CHO cells position their MTOC at the leading edge (Figure 1A, top), while during cell division the two MTOCs position at opposite poles, forming a spindle structure (Figure 1A, bottom).

Microtubules grow radially from their MTOCs. We aim to understand how one or two such radial arrays of microtubules can position in confinement and how this positioning depends on microtubule dynamics, confinement shape, forces and proteins known to be involved in positioning processes. For this, we adopt a bottom up approach by building in vitro minimal systems. We grow microtubules from nucleating centers and confine them in different geometries (Figure1 B and C), mimicking the confined environment of a cell. We add proteins known to affect the positioning of these MTOCs in vivo, either by influencing the dynamics of the microtubules or the forces exerted on the MTOCs.

In our project ‘mitotic spindle’, we confine two dynamic asters inside 3D water-in-oil emulsion droplets made with microfluidics (Figure 2). We have chosen these 3D water-in-oil emulsion droplets for their spherical shape, which resembles a cell undergoing division. We study the positioning of these centrosomes by spinning disk confocal microscopy (Figure 2B and C + movie).  We show that very simple systems, involving only microtubule dynamics, confinement, pushing and pulling forces can lead to self-organized patterns that are biologically relevant. In particular, we reproduce a ‘mitotic spindle’ like organization with just these components. 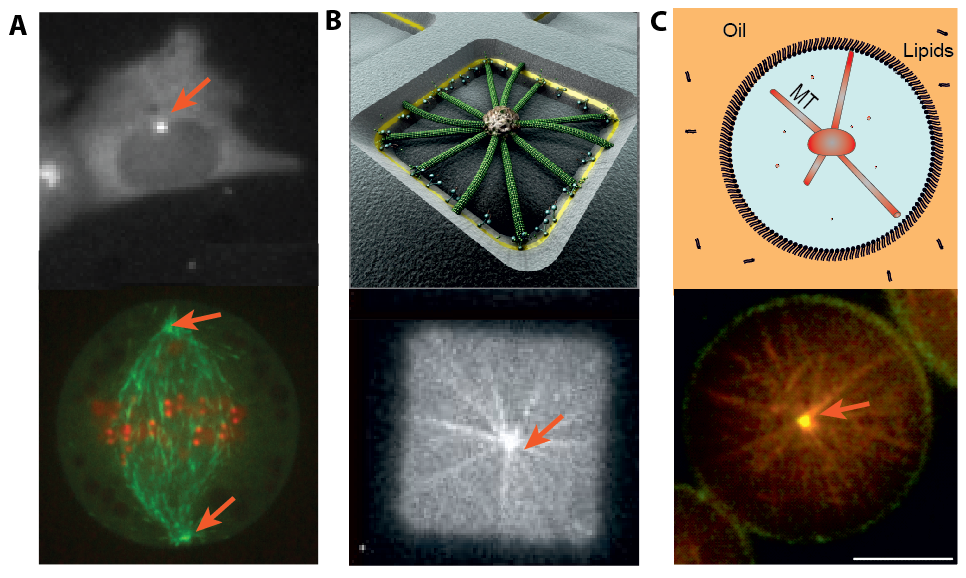 Figure 1: Positioning of radial arrays of microtubules.  A) Examples of MTOC positioning in vivo: microtubules grow as one or two radial arrays, positioning their MTOCs for example at the leading edge of the migrating CHO cell (top, taken from Yvon et al, Mol.Cell.Biol, 2002) or forming a spindle structure in dividing human cell (bottom, taken from Welburn lab website). Arrows point at the position of the MTOCs.  B and C) In vitro reconstruction: Confinement of one radial array of microtubules in different geometries : 2D (B) and 3D (C).

Figure 2 : Reconstruction of a spindle like structure. A) Microfluidic set up to create water in oil emulsion droplets. B) Two radial arrays of microtubules confined in a 3D emulsion droplet can form a spindle-like structure, with the two centrosomes finding the opposite poles (Spinning disk confocal maximum projection). C) Reconstruction of a middle zone: Ase1 (red) forms an antiparallel bundle linking the two centrosomes (microtubules in green, dark dynein at the membrane).