Since the very beginning enzymes are an essential tool in organic chemistry. Although occasionally not at centre stage of chemistry their application dates back to Liebigs and Wöhlers application of Hydroxynitrile lyases 180 years ago, Emil Fischers application of enzymes in sugar chemistry, when he formulated the lock and key hypothesis and to the first enantioselective synthesis ever described (L. Rosenthaler, Biochem. Z., 1908, 14, 238-253; Scheme 1). Here again Hydroxynitrile lyases are the enzymes of choice. Indeed these enzymes are still in use in our group. Both, the immobilisation (Chem. Soc. Rev., 2013, 42, 6308 - 6321) and application in organic solvents (Chem. Eur. J. 2010, 16, 7596 – 7604), as well as new Hydroxynitrile lyases (FEBS Journal 2013, 280, 5815–5828, ACS Catal. 2016, 6, 5081−5085.) or their genetic modification are studied. In this way these versatile tools are modernised continuously; often in collaboration with other groups.

Scheme 1: First enantioselective reaction in chemistry. The topic is still under investigation in Delft and countless variations and additions are done.

The range of enzymes was extended since 1908 and today we study other C-C bond forming enzymes and many others that enable new chemistry.

Scheme 2: Chemically the addition of water to isolated C=C and in Michael fashion is a question almost unanswered. By applying enzymes these conversions can be performed under mild conditions with high selectivity (Catal. Sci. Technol., 2015, 5, 1385–1399.).

Extending the application of enzymes we combine them with chemical catalysts. Chemo-enzymatic cascade reactions are one of the mainstays of the section Biocatalysis and indeed was already studied in Delft by Prof. van Bekkum in the last century. By combining several steps in one pot a significant step economy can be realised and the potential for environmentally benign synthesis is improved. Thus several work up steps can be avoided and pure products are ideally isolated after a series of reactions in one single vessel after just one straightforward purification step. Immobilisation of homogenous catalysts and of enzymes (Scheme 3 & 4) were developed, many of them in collaboration with other research groups (Catal. Sci. Technol., 2016, 6, 4882–4888; and J. Mol. Catal. B: Enzym., 2015, 114, 42–49.). 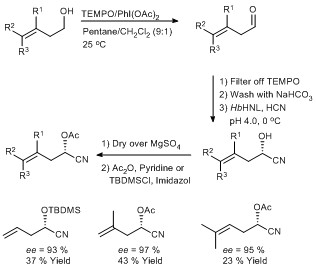 Scheme 4: Immobilised TEMPO as organo-catalyst in the oxidation of a sensitive alcohol to aldehyde and subsequent enantioselective cyanide addition catalysed by a Hydroxynitrile lyase (Eur. J. Org. Chem. 2006, 1672–1677).