Yeast glycolysis is the central pathway to relevant biobased building blocks. Its regulation has been subject to decades of research – nevertheless engineering strategies to increase the glycolytic flux have failed. Interestingly, the glycolytic rate of native and industrial strains is higher on sucrose compared to glucose. In spite of these findings, sucrose metabolism in Saccharomyces cerevisiae has not been studied in detail and fundamental questions remain open, such as why S. cerevisiae actually can grow faster on sucrose compared to glucose?

Sucrose metabolism in S. cerevisiae is driven by the enzyme invertase, which catalyses the hydrolysis of sucrose, allowing for the release of the monomers glucose and fructose. Substrate consumption in S. cerevisiae is characterized by a glucose repression mechanism that leads to preferred consumption of glucose. Thus, in principle, growth on glucose should be faster than on sucrose. Interestingly, this is not the case - several previous studies on sucrose utilization by S. cerevisiae report higher specific growth rate of this yeast on sucrose, when compared to the growth on glucose. The precise mechanisms of gene regulation behind sucrose catabolism compared to glucose in S. cerevisiae have not yet been described, nor the metabolic makeup (i.e. metabolite concentrations and fluxes).

In this project we will use bioreactor cultivations under aerobic and anaerobic conditions and apply current systems biology tools: metabolomics, fluxomics and mathematical modeling to gather insights into cellular metabolism and regulation.

This work aims at unraveling sucrose metabolism using a systems biology approach, i.e. we will study the physiology of different S. cerevisiae strains on sucrose and analyze the extra- and intracellular metabolite concentrations to understand and eventually engineer yeast glycolysis for higher rates on glucose.

This project is performed in close collaboration with the Metabolic and Bioprocess Engineering Laboratory at Universidade Estadual de Campinas (Brazil). 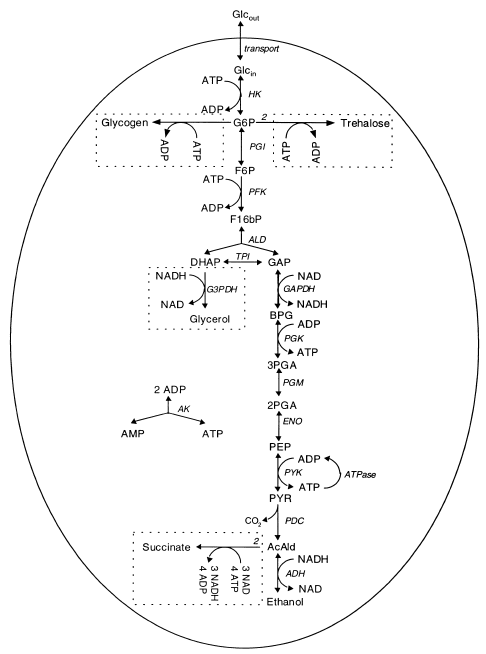