I.N.A.A. is short for "Instrumental Neutron Activation Analysis", an analysis technique capable of determining many elements at the same time at very low levels. The technique and its advantages and disadvantages are described here. At the end, a few examples of limits of detection in 3 different kinds of material are given.

Neutron Activation Analysis is a method of qualitative and quantitative element analysis, in which the sample material is irradiated with neutrons in a nuclear reactor. In this process, some stable isotopes are converted into radioactive isotopes. While these isotopes decay, having half lifes varying from seconds to years, they are emitting different kinds of electromagnetic radiation, usually including gamma radiation. This gamma radiation is measured with semi-conductor gamma-ray spectrometers. Specific radionuclides emit gamma radiation of characteristic wavelengths or energies. So when you have a peak in your gamma-spectrum at a certain energy, you can determine with which element it corresponds. The peak area gives information about the amount of this element present in the sample.

Elements that do not yield gamma-ray emitting radionuclides cannot be detected with INAA. The detection limits improves with the amount of radioactivity the element yields and the intensity of the gamma-rays that are emitted. There is no simple rule-of-thumb relating the elements to their detection limits. 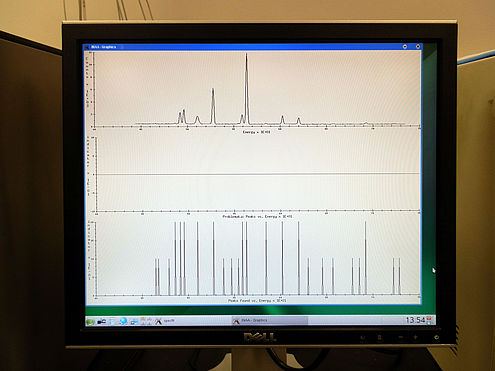 One of the most important advantages of INAA is that most sample matrices appear to be transparent, because the usual constituting elements - H, C, O, N, P, and Si - hardly form any radionuclides. This makes the method highly sensitive for measuring trace elements, because the main comstituents give no signal and do not cause any interferences. Because of this, it is also not necessary to do any sample preparation other then size reduction and (in some cases) drying, making the technique non-destructive. Another advantage is that the technique requires only small amounts of sample material - 100 to 200 milligrams will do.

The way we analyse the spectra in Delft makes it possible to always report an element concentration - when normally a detection limit would be reported, we provide an unbiased concentration with a correct, large relative uncertainty. This results in datasets for larger studies without detection limits or upper limits in them, so that all data have the same meaning and can be interpreted in a straightforward statistical sense.

How is an analysis carried out?

The analysis procedure can be divided into three steps: preparing and irradiating, performing measurements, and interpreting the results. 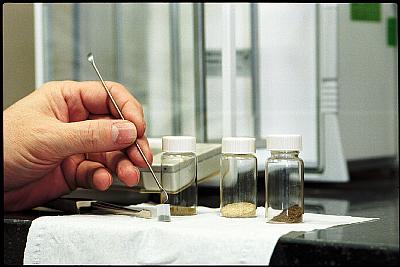 In step 1 sample material, depending on the type of material 50 to 200 mg, is weighed and packed in high purity polyethylene capsules. Because there is almost no sample preparation necessary, the chances on contamination are minimal. 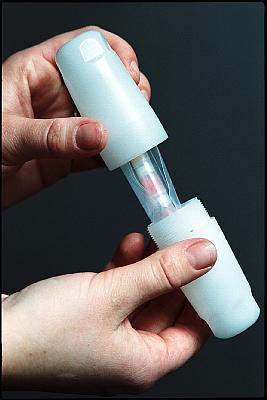 A maximum of 14 capsules filled with sample material, together with a capsule filled with a certified reference material and an empty capsule (the "blanc"), are sealed together in polyethylene foil. Comparators are added in order to measure the neutron flux during irradiation. 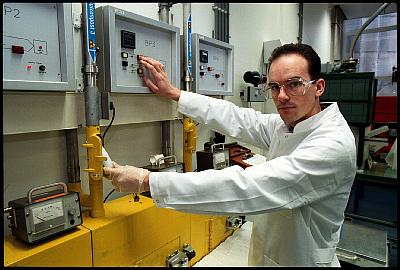 In step 2, the whole package is packed in an irradiation container, and irradiated by shooting it to a position close to the reactor's core by means of a pneumatic irradiation tube system. 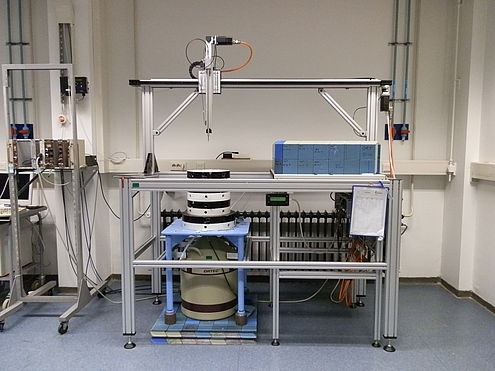 In step 3, the samples are unpacked and measured on either a well-type or a coaxial semi-conductor detector, depending on the amount of radio-activity formed. Depending on which elements you are intersted in, a waiting time is applied in order to let the nuclides with shorter half life times decay, which gives a lower background and less interferance. Samples are usually measured for 1 hour, as goes for the reference material and the blanc. The comparators are measured for 15 minutes.
In step 4, the results are interpreted using a UNIX-based computer system. The peaks are fitted, their peak areas and energies determined, and the neutron flux is determined from the comparator spectra. Finally all this information is converted into a list of elements and their concentrations.

In a full analysis, the short-lived nuclides are determined first. Using a Fast Rabbit System, each sample is irradiated separately (but together with a comparator in order to calculate the neutron flux) for 5 up to 30 seconds at a thermal neutron flux of about 1017 m-2s-1. After a waiting time from seconds (the element Se has a nuclide with a half life time of 17.5 seconds and thus needs to be measured as shortly after irradiation as possible) up to 20 minutes sample and comparator are measured separately. After the analysis has been completed for all samples, a waiting time of several days (5-7) is applied before irradiating them again in order to determine the other elements with longer half life times.
After this waiting period, the samples are packed together as described above, and depending on the kind of material irradiated for 1 to 4 hours at a thermal neutron flux of about 5x1016 m-2s-1. To determine the elements with medium lived radionuclides, all samples are measured 3 to 5 days after irradiation. To determine the long lived radionuclides, the samples are measured again about 3 weeks after irradiation. After this third measurement, all 3 spectra of each sample are interpreted together.

To give you an idea of the sensitivity of INAA, a few examples of frequently asked elements in different materials are listed below. All limits are based on ± 200 mg of sample material.

The system is calibrated using NIST (or equivalent) certified reference materials to relate the observed peak areas, received neutron dose and sample mass to the sample concentrations reported in the end.

If you want more information, please don't hesitate to phone us at ++31 15 2783528, or send e-mail to dr. M. Blaauw. We have a lot more examples with more elements in many different kinds of samples for you on file.