Most charged particle beams use magnetic fields to transport and focus the beam from the source to the sample. To produce the magnetic field along the beamline, long solenoides or many Helmholtz coils are required (as for example in the VEP and in the POSH facility).

The Electrostatic positron beam facility (Ebeam) was designed and build in the materials group of the department of reactor physics from 1995 on. The facility now produces a positron beam of up to 9000 e+/s at user variable energy of 0-25 keV. 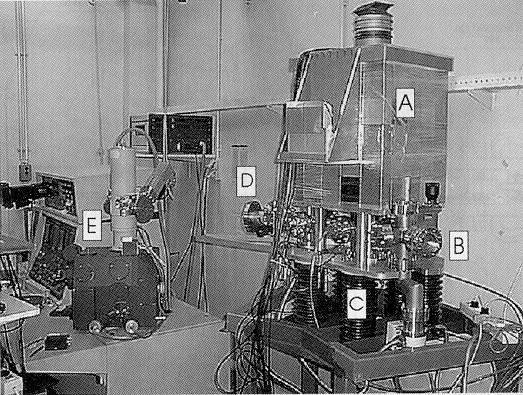 Picture: The Ebeam in room 008. A The lead shielding of the source vessel. B Vacuum valve to one of the three beam ports. C One of five high voltage insulators bearing the beamline. D Beam port to be connected to the scanning microscope E.

The main advantage an electrostatic setup is the lack of (stray) magnetic fields at the sample position. Often one likes to experiment in fieldfree regions which is hard to realize using magnetic transport. In the electrostatic case even the earth magnetic field can be cancelled by shielding the beamline with soft magnetic material.

Another advantage is that electrostatic lenses draw almost no power, whereas comparable magnetically guided systems need several kW to operate.

Of course there is a drawback : electrostatic guiding is by far not as easy implemented as magnetic guiding. 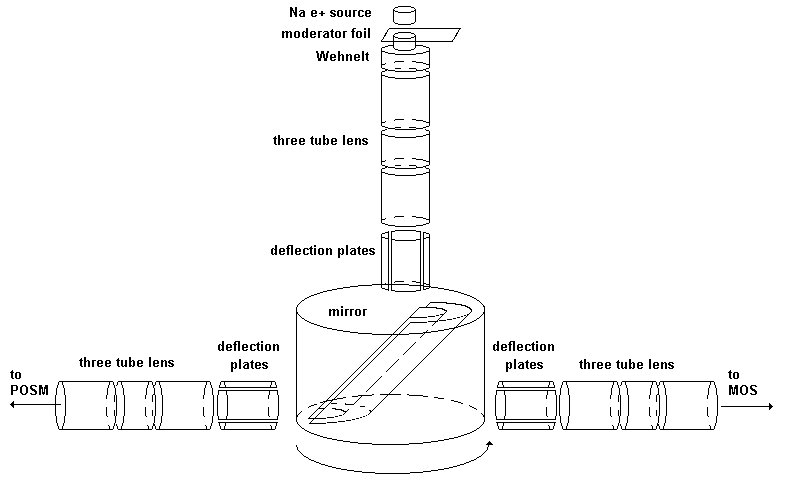 The vertically aligned source is a 550 MBq (4/4/1997) 22Na positron emitter encapsulated with a Æ 6 mm, 5 mm thick Ti foil and is kept on highvoltage HV. The positrons emitted from 22Na have a broad energy distribution up to the maximum energy of 1.6 MeV and their angular distribution is random.

Part of the emitted positrons hit a 3 mm Tungsten moderator foil which is used in transmission mode. (Some 0.01 % of the positrons are thermalized, transmitted and re-emitted at the backside of the foil because of the negative workfunction of Tungsten for positrons.)

Re-emitted from the moderator at HV, the mono energetic positrons start with HV+3 eV and are accelerated into a smaller circumference by a Wehnelt electrode combined with a three tube electrostatic lens. This lens is ended by an anode tube at local ground (LG = HV-3kV) which gives the beam its transport energy of 3 keV. Inside this tube, four circular deflection plates are mounted for finetuning the beam alignment. This 3 keV beam is inserted into a rotatable, cylindrical 90o mirror with 10 mm diameter in- and output channels. This mirror can be thought of as two coaxial cylinders which are cut in half along the axis and whose axis makes an angle of 45o with the incoming beam. The mirror serves two objectives. 1) It filters high energy positrons from the beam as they will not be reflected into the horizontal ports going to the experiments. 2) By rotating the mirror, one of three horizontal output ports can be chosen to receive the positron beam thus making the positron beam available to three experiments (one at a time). Currently only two output ports are being used, closed by vacuumvalves.

In either outputport the beam enters another set of alignment plates followed by an einzellens directly after the mirror. The electrostatic optics following this lens depend on the experiment connected to the port. At the position of the valve the beam has been shown to have a near circular Gaussian intensity profile at 8x103 e+/s total at 10 mm FWHM .

At a distance of about 100 cm behind the valve, an intensity of 1000 e+/s at a focus of 1 mm FWHM was measured by using one additional einzellens, a focussing plate lens and a 1mm stop.