The Greenland and Antarctic ice sheets are two massive glaciers of continental size that store the equivalent to more than 68 meters of sea level rise. Both are currently losing mass in response to atmospheric and ocean warming, becoming a major contributor to sea level rise. Mountain glaciers and ice caps, on the other hand, hold only roughly 40-50 cm of sea level rise, but respond much faster to climate change and have been the largest land ice based contributors to sea level rise in the past century.

At GRS we investigate the past, present and future of ice sheets and glaciers through remote sensing, geodetic science, and modelling.

We measure changes in the topography of the ice sheets and glaciers to monitor their current “health”. For instance, using laser and radar altimetry, we found that the Antarctic Peninsula has been losing mass dramatically in the last decade. We use gravimetry to measure current changes in the mass of the Earth’s land ice. For that, we correct remote sensing data from signals coming from solid Earth, such as the solid Earth deformation caused by ice loads. This process is also investigated within the theme sea level change.

We combine our measurements with model simulations to understand what is causing the observed mass changes: the surface mass balance processes (SMB, the difference between accumulation from snowfall and mass loss from melt and sublimation) at different spatial and temporal scales, or changes in the dynamic flow of the ice masses. For instance, we have recently estimated the amount of seasonal meltwater storage in the Greenland ice sheet, made unexpected discoveries such as the presence of lakes within an ice shelf, and revealed that clouds enhance Greenland ice sheet meltwater runoff. 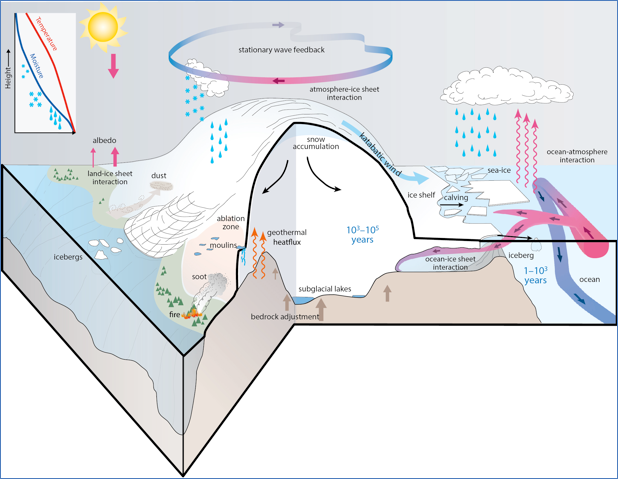