Dutch concrete bridges are getting old and wrinkled. For this reason, Assistant Professor Yuguang Yang spots cracks inside concrete by listening to how sound spreads inside it. Proposing a revolutionary monitoring technique that can reduce maintenance costs and help unsticking traffic on highways.

“BAAAAAAAAAAAAAANG!!!” After Yang’s fingertip presses a red button, a piston starts pushing down a clamped 10-meters-long concrete beam. In an instant, a noise loud as a gunshot cracks an up-side-down smile through it. Freezing time for a few seconds in the lab and lifting a cloud of dust. “Breaking things is an excellent way to test conclusions,” says Yang. “Otherwise assumptions remain on paper.” Shear failures — diagonal forces pulling from opposite sides within a structure and strong enough to destroy it — are difficult to predict; preceded by little, if any, deflection or cracking. To collect data, Yang and his team install optical fibres and paint slabs white, turning them into giant QR codes, to track how cracks develop on the same reinforced concrete used for bridges. “Size does matter for testing shear failures. Only 30 tests out 2000 throughout history were done with prototypes similar to this size.” 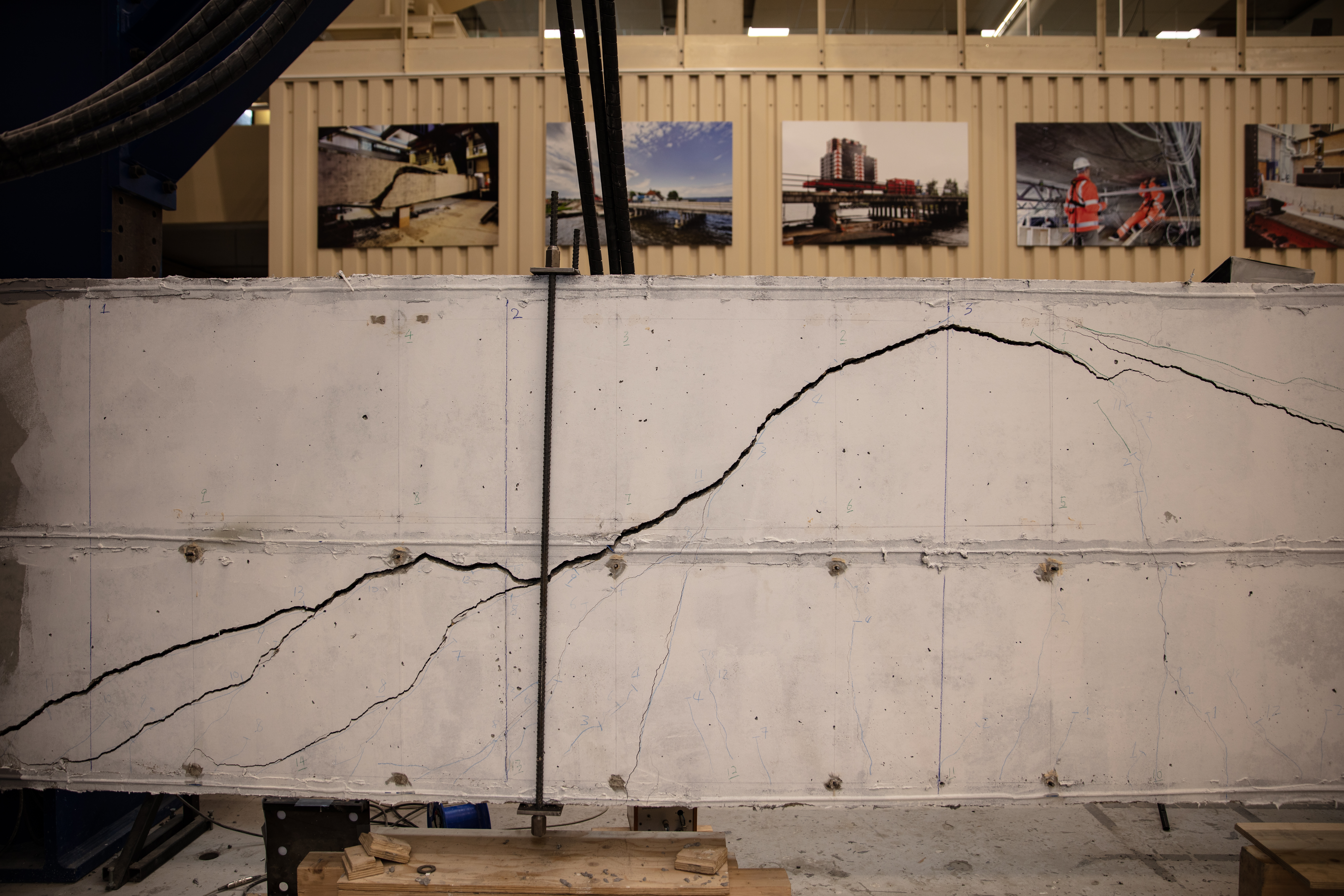 A large percentage of Dutch highway bridges date back between 1950 and 1970. The traffic has increased in weight and frequency over the past 70 years, and regular health checks are a must to keep them secure. “Nowadays, visual inspections are the most common methods,” says Yang. ”Every year, inspection engineers look with their eyes at bridges and, if they spot corrosion or any crack critical for the safety of the structure, they request maintenance work. Such problems are a red flag and, at that point, fixing and keeping the bridge in operation is expensive and it can hinder traffic. More in-depth methods to notice cracks beforehand can spare money and time for both engineers and drivers.”

To solve such an issue, Yang’s solution is simple: using sound to identify subtle changes of concrete before cracking. The tracking mimics a sped up game of PONG: Smart Aggregates transmitters, two small marble pieces fitting among two fingers with an electrode in-between, emit constant vibrations and capture rebounding sound waves. Creating an inside-out virtual map of the entire structure they are applied on. If a wave from point A to point B, and the rebounding waves around, is hampered, there is a crack along the way. “By calculating the time to travel a certain distance by sound, you can determine if the material has expanded or is missing,” says Yang. “Besides, unlike Steel or Aluminium, Concrete’s granularity is excellent to spread and rebound noise waves in the whole structure.” 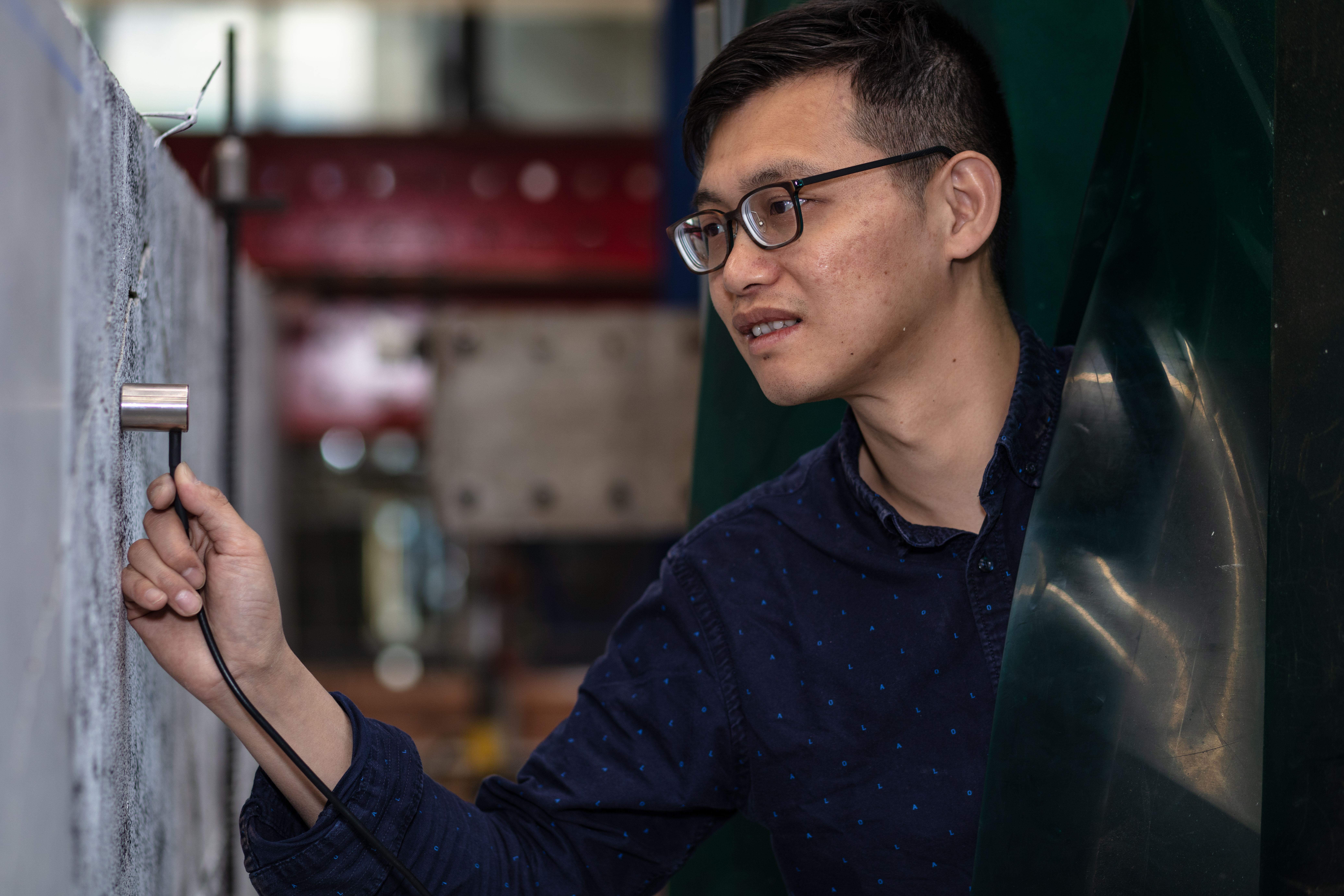 From the earth through the highways

Innovation comes from intersecting different fields and, this time, Geophysics is Yang’s muse. “Geoscience engineers use earthquakes’ noise to study earth’s structure and composition,” says Yang. “I and other colleagues, borrowed the algorithm behind such technique to study how bridges' structure and material respond to moving cars and trucks.” Yang and his team are optimists that surrounding every concrete bridge in the Netherlands with transmitters — each costing € 20 — will be beneficial to form a wide network monitored 24/7. “The system’s main function is to intervene in time for safety purposes, affecting traffic as little as possible. Also, from how the load changes on the structure, you can understand the type and frequency of traffic. Such live data can be used to improve Dutch infrastructures and redirect cars to reduce traffic jams.” 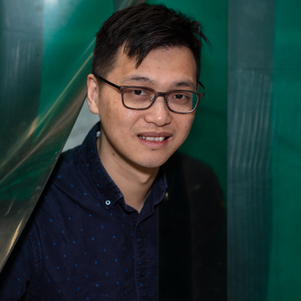 Breaking bridges to understand them better
Every year inspection engineers check bridges for corrosion or cracks. But a visual inspection takes up a lot of time. Is there a more efficient way of doing it? According to Yuguang Yang, there is. He developed an in-depth research method that helps spot places that are vulnerable to cracks.

The most used material in the world