The best way to measure drought

Following the dry summer of 2018, the Ministry of Infrastructure and Water Management established a ‘Drought Policy Consultation’. Researchers recommended making better use of drought indicators in the future.

Not all droughts are the same. Not only does the location matter, but also the duration and the extent to which the rainfall deviates from historical levels. In the Netherlands, drought is expressed as precipitation deficit: the difference between precipitation (from April) and potential evaporation. However, this theoretical concept appears to be due for replacement; researchers point out that it is precisely in periods of drought that evaporation drops below the potential level, because crops cannot get enough water.

Drought comes in degrees. A shortage of rainfall is the primary cause, which over time can lead to soil desiccation and damage to crops and nature. This is followed by a phase of ground and surface water depletion, also known as the hydrological drought. Hydrological drought can lead to damage to nature and infrastructure, for example in the form of soil compaction and stresses in gas pipelines. This is the prelude to the next phase of drought: the socio-economic drought that manifests in diverse human inconveniences and economic damage.

After the drought of 2018, hydrologists suggested various alternatives to the precipitation deficit as a measure of drought. They proposed using the Standardised Precipitation Index (SPI, see box), the groundwater level, river discharges and soil moisture content.

Rutger Weijers tested the usefulness of these indicators for his graduation project at the Ministry of Infrastructure and Water Management. He reconstructed a dry summer from historical precipitation data and set two working groups to work on it. They had to decide what measures to take in response to the data that came in. One group had access to the new indicators, while the other did not. Weijers’ research (conducted at the Faculty of Civil Engineering and Geosciences) revealed that the group using the new indicators was quicker to implement measures and maintained them for longer than the control group.

TU Delft’s DeltaLinks knowledge platform (flowsplatform.nl) sees opportunities for ‘proactive drought management’ using the new drought indicators, but more research needs to be conducted first. For example, more data is required on parameters such as soil moisture content. DeltaLinks also advocates using the SPI in the Netherlands, whereby it could potentially replace the theoretical precipitation deficit as an indicator for drought. 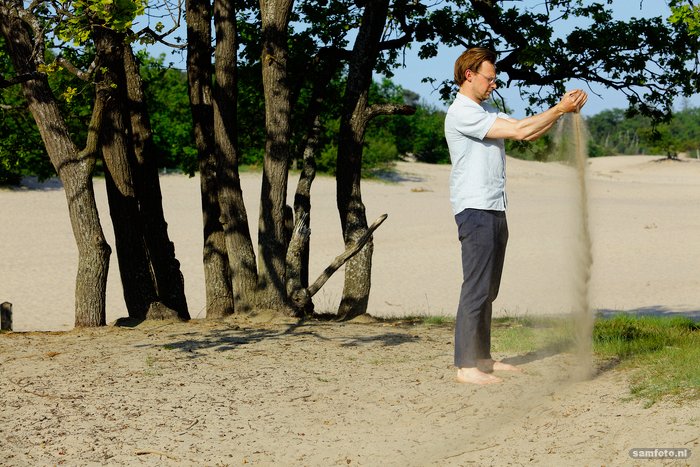 Rutger Weijers investigated the usability of drought gauges for his graduation research at Rijkswaterstaat.

The European Drought Observatory (EDO) uses the Standardised Precipitation Index to indicate the measure of drought. The SPI measures deviations in rainfall over a given period (1, 3, 12 or 24 months) compared to the long-term average over the same period. The SPI describes the deviation from the mean for a certain area, expressed as a standard deviation. Severe precipitation deficits result in an SPI below -1, while excessive rainfall results in an SPI above +1.

The number behind the SPI indicates the length of the period measured (in months) and also the consequences. SPI-1 to SPI-3 cover the 1-3 month period and concern soil moisture content, snow thickness and the drainage volume. SPI-3 to SPI-12 mainly reflect the amount of water discharged from the rivers and water levels in the reservoirs. SPI-12 to SPI-48 concern the longer term and mainly describe the effects on the major reservoir lakes and groundwater replenishment.

While the editors were discussing the theme for this July issue in the pouring rain, we received the news that after three years, the drought in the Netherlands is officially over. Good news, but we can’t cheer too soon. A recent climate simulation by the Dutch meteorological institute KNMI shows that more evaporation and less precipitation will occur in the future. TU Delft is therefore continuing to work on solutions to the drought problem. Knowledge platform Deltalinks, for example, advocates more accurate indicators for measuring drought. And shipping professor Rudy Negenborn is preparing the inland navigation sector with a plan for innovations. Groundwater expert Mark Bakker, for his part, is trying to find out how subsidence can be stopped. Several researchers and alumni are also involved in initiatives to combat drought in the city.