Cuneiform in a scanner

Beads, bones and arrowheads. Plenty of odd objects have found their way into the micro CT scanner at the Faculty of Civil Engineering and Geosciences (CEG), but the clay tablet scanned this spring topped the lot. It revealed 4,000-year-old fraud prevention.

The freezer-sized micro CT scanner is housed in the glass building at CEG. The device was originally purchased to examine soil samples, but Dr Dominique Ngan-Tillard is receiving an increasing number of requests from archaeologists hoping to unveil hidden aspects of ancient items.

The first thing that will strike you is the highly detailed finishing of the clay tablet. The tablet, the size of a bar of soap, bears writing in an exquisitely refined and measured hand. Cuneiform was used in the Middle East region from 3300 BC to 300 AD.

Dr Rients de Boer curates 3,000 clay tablets at the Netherlands Institute for the Near East in Leiden. With a degree in Assyriology and now working as an assistant professor at the VU Amsterdam, he is able to read cuneiform. De Boer stores the so-called Böhl collection in the safe at NINO. This collection is housed in two man-sized metal cabinets packed with clay tablets. The largest tablets are the size of a potato, the smallest are only as small as a walnut. Here again, the refined quality of the artefacts is plain to see - there’s nothing primitive about them.

The tablet about to be scanned is special: it is contained in an envelope also made of clay. Before, a curator would simply open the envelope to read the tablet inside – there are examples of this in the Böhl collection. This destructive method is no longer being used. The hope is that the micro CT scanner will reveal the cuneiform hidden on the inside. 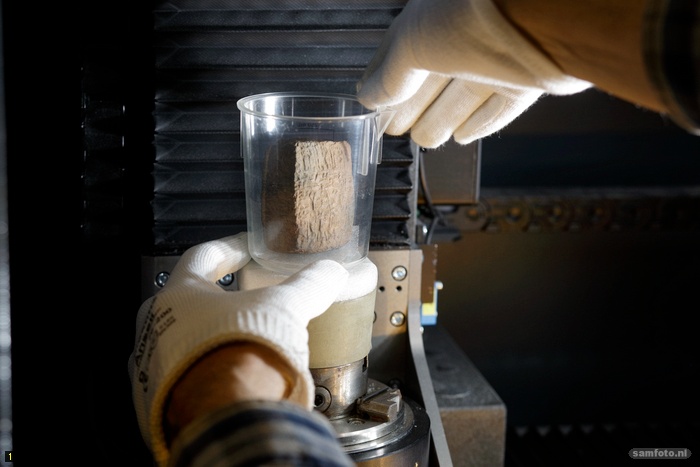 The clay tablet in the scanner at the Faculty of Civil Engineering. Photo (c) Sam Rentmeester.

The scan takes 90 minutes to complete. The object slowly revolves inside the scanner while 1,140 X-ray recordings are made. The result is a 3D, 8.2 GB data set with a resolution of 30
micrometres.

The initial cross sections confirm that the researchers are indeed dealing with a separate clay object, encased in a layer of clay. Incidentally, it is still unclear how the Mesopotamians managed to envelop a wet tablet of clay with a layer of clay without everything sticking together. They may have used sand, straw or flour to separate the layers. The crystal-clear scanner images may well provide an answer to questions such as this.

Dr Ngan-Tillard spent a day reconstructing the inner tablet based on the scanning data. She started by marking the (minimal) free space between the tablet and envelope in all the cross sections, thus selecting the surface of the encased clay tablet. Subsequently, the clay tablet could be reconstructed in 3D. This resulted in a first-class, flawless reconstruction. In order to avoid the reconstruction being mistaken for an actual tablet, Ngan-Tillard rendered the calculated surface in an abstract blue colour.

De Boer identifies the tablet as a receipt for a delivery of fresh sesame. The tablet is from the Girsu region in Southern Iraq, and is written in Sumerian cuneiform. The envelope reports the delivery of 15,280 litres of fresh sesame from Lu-Ningirsu to his brother Ur-Abba. De Boer notes that the enclosed tablet specifies an initial delivery of 11,050 litres followed by a second of 4,230 litres. This nicely adds up to 15,280 litres. 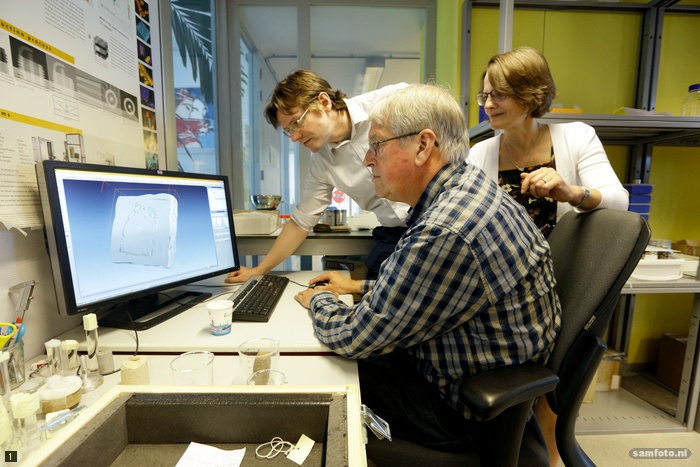 The reconstruction of the scan data of the clay tablet in progress. Photo (c) Sam Rentmeester.

The curator explains that it was very easy to make changes to the cuneiform in the wet clay. This gave people creative, and potentially lucrative, ideas. Stating the same amount on both the envelope and the encased tablet made it a lot harder to commit fraud.

By using the 3D data sets to create 3D prints, the researchers can produce replicas of clay tablets for students, without risking damage to the originals. Similar pieces that have somehow ended up in Berlin, London, Paris or Leiden in the course of history can now be compared without the need for the originals to travel.

Thus, the lost tablets of Raqqa can be brought back to life

A recent example is the Scanning for Syria project, with which Ngan-Tillard is also involved. The project concerns 400 clay tablets that were discovered in Northern Syria between 1985 and 2010, and had been stored in the museum in Raqqa. Following the devastation caused by IS, it is feared that the finds were lost. At the time, synthetic moulds of 20 tablets were produced. By scanning these moulds, researchers can create a 3D data set which can then be printed. Thus, the lost tablets can be brought back to life, including the letters, contracts, lists and the names of the people who lived and worked there 1,400 years ago.

The pop-up exhibition Scanning for Syria will be on display at the National Museum of Antiquities in Leiden until 28 October. The exhibition is part of Archaeology of the Future, a symposium addressing a number of techniques that could potentially protect the heritage and support the archaeology. Exact chocolate copies of a small clay tablet are on sale at the exhibition.