Hydrogen is the ultimate CO2-free energy carrier. TU Delft researchers are planning a future in which green hydrogen takes the lead as a source of both electricity and fuel.

Something strange is happening with green hydrogen (hydrogen that is produced using solar or wind power and so is CO2 free); everyone wants it, but it does not actually exist. 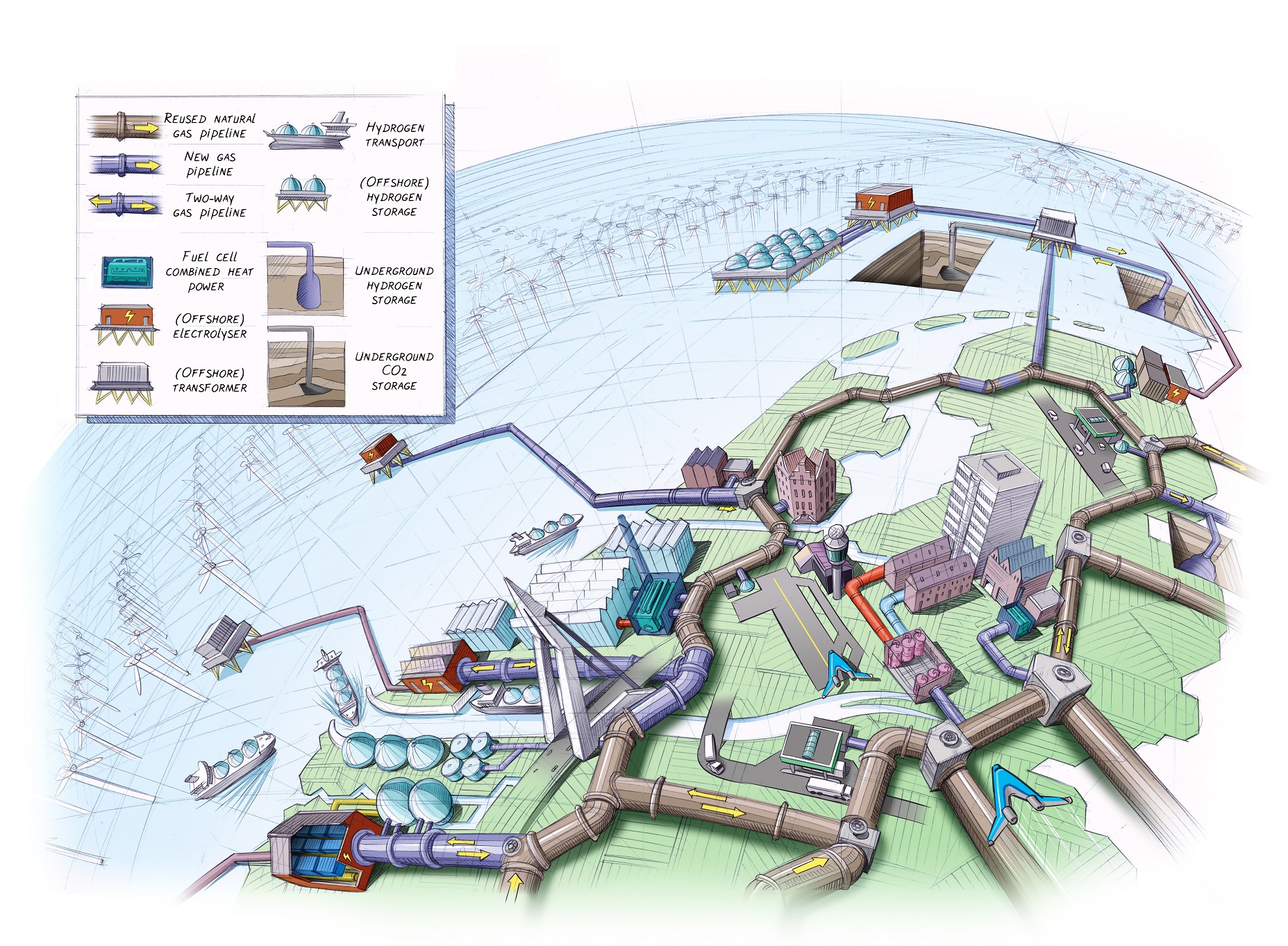 The Government’s view on hydrogen states: ‘Industrial clusters and ports see hydrogen as an indispensable part of their future. For the transport sector, hydrogen is crucial for achieving emission- free transport. The agricultural sector sees opportunities (...). Cities, regions and provinces all want to use hydrogen.’

The reality contrasts rather poorly with this unanimous enthusiasm. A recent report (1) by the International Energy Agency (IEA) states that less than 0.1% of hydrogen is produced CO2 free.

The colourless gas hydrogen is accorded a wide range of colours in publications. The most commonly used type is the ‘grey’ hydrogen that is produced from natural gas by combining methane and steam under high pressure and temperature. If the resulting CO2 is captured and stored, this hydrogen is classified as ‘blue’. ‘Green’ hydrogen is produced by electrolysis (splitting water into H2 and O2) using solar or wind energy. When that electricity is generated in the Netherlands, this hydrogen turns ‘orange’.

Green hydrogen forms the link between electricity and gas. Electricity can be used to produce hydrogen by electrolysis, and hydrogen can be used to produce electricity in a fuel cell or as fuel in a gas turbine. The awareness of this reversible exchange between forms of energy brought together grid managers TenneT (electricity) and Gasunie (gas), resulting in a joint vision of the future (4). The Paris Climate Agreement requires emissions to be reduced by 95% by 2050. Gasunie and TenneT believe this will drive strong growth in solar and wind energy combined with large-scale conversion of electricity into hydrogen, the production of synthetic fuels and the development of energy storage solutions.

Gas offers solutions to the persistent problems faced by the greening electricity sector. For example, fluctuating electricity production from sun and wind makes it difficult to maintain the balance between energy production and consumption. This balance becomes a lot easier to achieve when surplus production can be channelled into electrolysis plants.

Another problem is storage. Large amounts of electricity can really only be stored in reservoirs (‘pumped hydro’) which we do not have in the Netherlands. However, we do have salt domes large enough to store gas reserves for years.

Finally, capacity problems are to be expected when households switch en masse to heat pumps and electric cars, but hydrogen piped through a former natural gas pipeline has ten times more energy capacity than a high-voltage cable. A small hydrogen-fired CHP plant produces electricity and heat on site. By a lucky coincidence, the concerns of the electricity sector (balance, storage and capacity) are precisely the strengths of the gas sector.

The fossil-free energy landscape of 2050 will rely heavily on immense offshore wind farms far out at sea. Hydrogen will flow from there into the country via pipelines. Ships will bring hydrogen from regions with cheap solar and wind energy to the ports on shore. Hydrogen pipelines from the west to the east of the Netherlands will supply energy for heavy industry, fuel for filling stations and heat and electricity to urban districts. Hydrogen will also support local energy networks.

But how do we get there? Offshore wind plays a key role. By early 2020, the Netherlands produced just over 1.1 GW in offshore wind farms (5). According to the central government’s plan, this will have to increase to 11 GW by 2030 and 70 GW by 2050 to produce the required amount of green power. But that is far from enough to replace the remaining three- quarters of energy consumption in the form of fuel. So ‘hydrogen professor’ Ad van Wijk assumes that the Netherlands will import a substantial part of its energy requirements in the future, just as it does today, but then from areas with cheap solar and wind energy.

Electrolysis plants will also have to be scaled up enormously. There are currently an estimated several dozen megawatts of electrolysers in the Netherlands, mainly in chlorine plants where hydrogen is produced as a by-product. According to the Government's view on hydrogen, we will require 500 MW of electrolysers by 2025, 3 to 4 GW by 2030, and 10 GW offshore by 2040. Van Wijk has written a proposal (6) for 2 x 40 GW in 2030 as part of a European cooperation project.

That plan has been integrated in the European Commission’s hydrogen strategy (7). Both offshore wind and electrolysis will therefore require unprecedented expansion in the coming decades. The routes to hydrogen are the ‘Delta Works’ of the energy supply.

According to Van Wijk, the gas platforms above the island of Ameland could be a good starting point. The natural gas can be converted on site into CO2 and H2, whereby the CO2 is stored in an empty gas field and the ‘blue’ hydrogen gas can form the starting point of a fossil-free hydrogen network.

Hydrogen is more expensive than natural gas, says professor Kornelis Blok (TPM). “Just as with solar and wind energy, financial stimulation will initially be required to cover the excess costs.” And it will probably stay that way. If green hydrogen becomes available in large quantities, it will reduce demand for natural gas, thereby lowering its price. So the success of green hydrogen will weaken its own competitive position. The hydrogen economy cannot get off the ground without subsidies or regulation.

Ultimately, Blok expects that an energy system based on renewable sources will be comparable to, or perhaps 10% more expensive than, the current energy system.