In the quest to create artificial life, TU Delft researchers have taken an important step. They designed a strand of artificial DNA that is capable of copying itself.

The DNA strand only contains a couple of genes, just enough to kick-start the DNA replication process. Lacking the genes that regulate cell division and survival, talking about artificial life is an overstatement. But the replication takes place in a simple cell model, a liposome.

“It is certainly a breakthrough,” says Dr Pauline van Nies, who until recently worked at the bionanoscience department in Delft, in the group of Prof. Christophe Danelon. Van Nies is the first author of a paper, Self-replication of DNA by its encoded proteins in liposome-based synthetic cells, describing this feat. It was published earlier this year in Nature Communications.

The Delft research builds in part on the work of a group of Japanese scientists who, about 15 years ago, assembled a cocktail of enzymes that can transcribe DNA and translate messenger RNA, the process that ultimately leads to the production of new proteins. Feed these enzymes a strand of DNA with gene encoding for proteins that orchestrate DNA replication, and Bob’s your uncle: the DNA will self-replicate. Or will it? 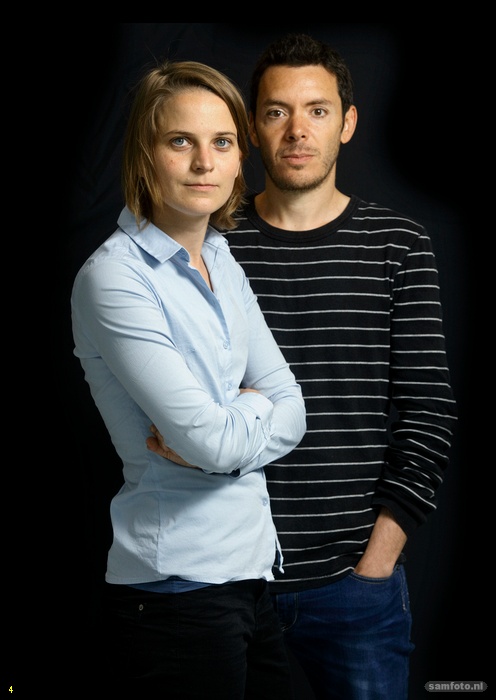 Pauline van Nies and Christophe Danelon speak of a breakthrough.

This sounds simpler than it is. DNA replication is an extremely complicated process in living cells as it is entangled with many other functions. Van Nies thought of using the DNA replication machinery of a virus called Ф29. “Viruses are extremely efficient in encoding proteins in a small genome and in robustly replicating their genetic information.”

In human cells, DNA replication is managed by hundreds of proteins. Ф29 only needs four. The Delft researchers joined forces with microbiologist Margarita Salas and a couple of her colleagues at the Autonomous University of Madrid. Salas has been working with Ф29 for almost half a century. She discovered the DNA replication mechanism of the Ф29 virus and managed to isolate it.

Van Nies composed a unique DNA blueprint that took into account a number of different factors related to the flow of genetic information, such as a suitable binding site for the ribosome, an element that is essential for the production of proteins.

A goal that is now coming closer is combining the new module that regulates the flow of genetic information with other essential cellular functions such as growth and division. In 2016, Danelon’s group created a way to synthesise the phospholipids that make up the cell membranes (also called liposomes), such as the ones the researchers used in this project.

The fundamental structure making up membranes is called the ‘phospholipid bilayer’, which is only a few nanometres thick and consists of two layers of lipid molecules. These molecules, in turn, are composed of a water-loving (or ‘hydrophilic’) head and a water-fearing (or ‘hydrophobic’) tail. When brought into contact with water, the lipids spontaneously assemble to form a closed compartment.

DNA replication is an extremely complicated process in living cells

Phospholipid molecules are created through a series of complex biochemical reactions that are set in motion by specialised proteins (enzymes). The DNA that encodes for these enzymes was originally extracted from E. coli cells, a relatively simple and well-understood class of bacteria that can be found in the human gut. The DNA was then purified, undergoing multiple molecular biological steps to end up as the final DNA template. In total, the DNA strand consists of seven or eight genes.

The yield of newly synthesised phospholipids was still too small to sustain growth, but Danelon is confident his group can optimise this process. The next step is to combine this module with the four-gene long strand of DNA that encodes for the DNA replication machinery.

But there is more to cell division than just producing enough phospholipids. Modern cells require a streamlined process in which copied DNA is neatly packed and then evenly distributed towards the poles of the cell. Concurrently, specialised proteins squeeze the mother cell into two daughter cells.

Mimicking this mechanism might prove too difficult for now. “We need to be humble,” says Danelon. “Sometimes it is wise to take a step back from the complexities of nature. We will design a simpler cell division technique, a ‘budding’ mechanism, that could also do the trick. I think we can create liposomes that grow until they start budding. If enough DNA is produced, hopefully, enough of the generated primitive daughter cells will contain the new DNA just by chance to sustain a cell population.” The researchers believe that this may well be how the very first cells self-reproduced before evolution equipped them with a more elegant and robust solution.